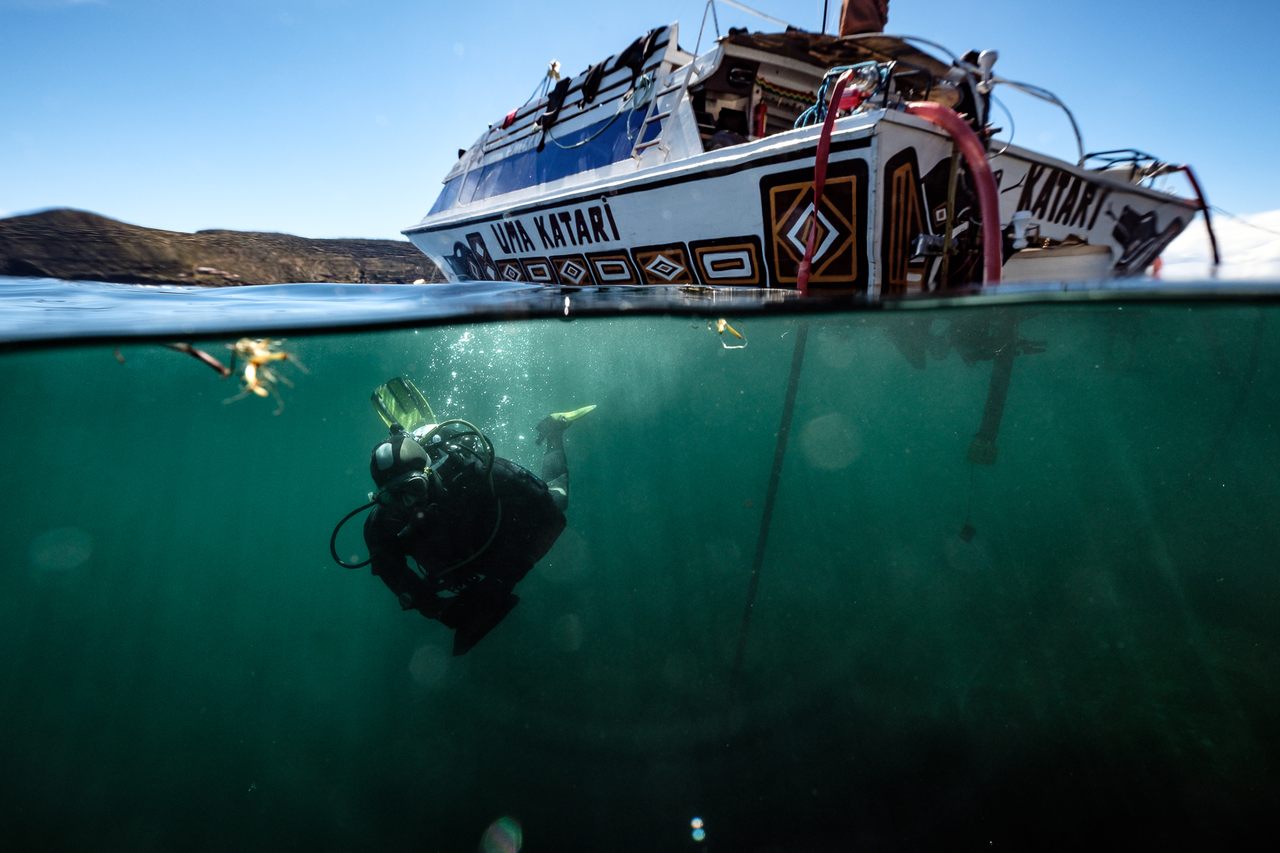 Some initial finds were made by amateur divers in the 1970s, but the recent finds by Capriles and Delaere's team are the first on the separate K'akaya reef. Courtesy Teddy Seguin
In This Story
Destination Guide

Sprawled across the border of what are now Peru and Bolivia, Lake Titicaca is seven times the size of Los Angeles. Despite the lake’s massive proportions, itsy-bitsy Incan artifacts have been turning up there for the last 50 years. Recently, a small box with remarkable Incan offerings was found at the base of a reef, the first-ever such discovery on the Bolivian side of the water.

Inca people were already dropping offerings below the surface of Titicaca when the Spanish began looting South America in the 16th century. According to José Capriles, an archaeologist at Pennsylvania State University, the Inca did not historically come from the area around the lake, but treated it as a mythical place of origin. The famous Isla del Sol, or Island of the Sun, near the center of the Andean lake, became a key destination in pilgrimages. It’s still home to farming communities and numerous ruins.

Archaeologists have made many remarkable finds directly off the island’s shores, on the Khoa reef, including some just last year. Now, the first ritual deposits beyond Khoa have been discovered, at the base of the smaller K’akaya archipelago on the lake’s Bolivian side. Recent surveys revealed a stone box nestled amid the submerged rock and algae, which contained an undisturbed, centuries-old Incan llama figurine, along with a petite roll of gold foil.

Incan artifacts rested at the bottom of the lake for centuries before anyone found them, in part because the Khoa reef was easy to miss from the surface. “The finds are extremely difficult to come by,” says Capriles, who co-authored of a new study published in the journal Antiquity. “For researchers without aerial photography it would’ve been very difficult to know there was an actual reef out there.”

Amateur divers stumbled across sunken ritual offerings in the 1970s, and some excavations turned up more finds, but given their stony exterior and their placement amidst the rocky submarine outcroppings, the discoveries are few and far between.

The offerings—a llama figurine carved from the shell of a spondylus (a spiny, orange-pink mollusk) and a petite roll of gold foil—were set in a cavity of an andesite box, a little larger than a thick coffee table book. The miniature llama and the gold were secured with a quarter-inch andesite plug carved from the rock, which held the items inside the cavity for centuries.

“The types of offerings the Inca left were extremely consistent,” Capriles says. “They resembled their gods, the sun, the moon, and these animals.”

Capriles believes the rolled gold represents an arm band. “It’s an abstraction of what a male figure may have looked like,” he says. “Instead of a gold male figurine, it’s a gold bracelet that represents the male individual.” His team thinks two holes on either side of the andesite offering box were used to carefully lower the box to its resting place from a boat.

Over the centuries, the water level of Lake Titicaca has fluctuated. At some points, towns were built on its banks, only for them to slip beneath the water later on. Today, the water is very close to its level in 1440, giving archaeologists a rough understanding of the environment Inca devotees were working in.

Given the lake’s gargantuan size, it may be some time before further ritual finds turn up. But considering the elevated place of the lake in the Inca tradition, it’s likely that many more pieces of the past may be in our future.

Why Do Tennis Crowds Have to Be So Quiet?

Diving Into the Submerged History of Summer, Lake Tahoe–Style

3D models of sunken boats mean there's lots to explore—even for those who want to stay dry.
archaeology

These arthropods can tell us about the causes of animal extinctions.
mines

7:29
Want to see fewer ads? Become a Member.
From Around the Web
Atlas Obscura Trips
Peru: Machu Picchu and the Last Incan Bridges
View This Trip
Thanks for sharing!