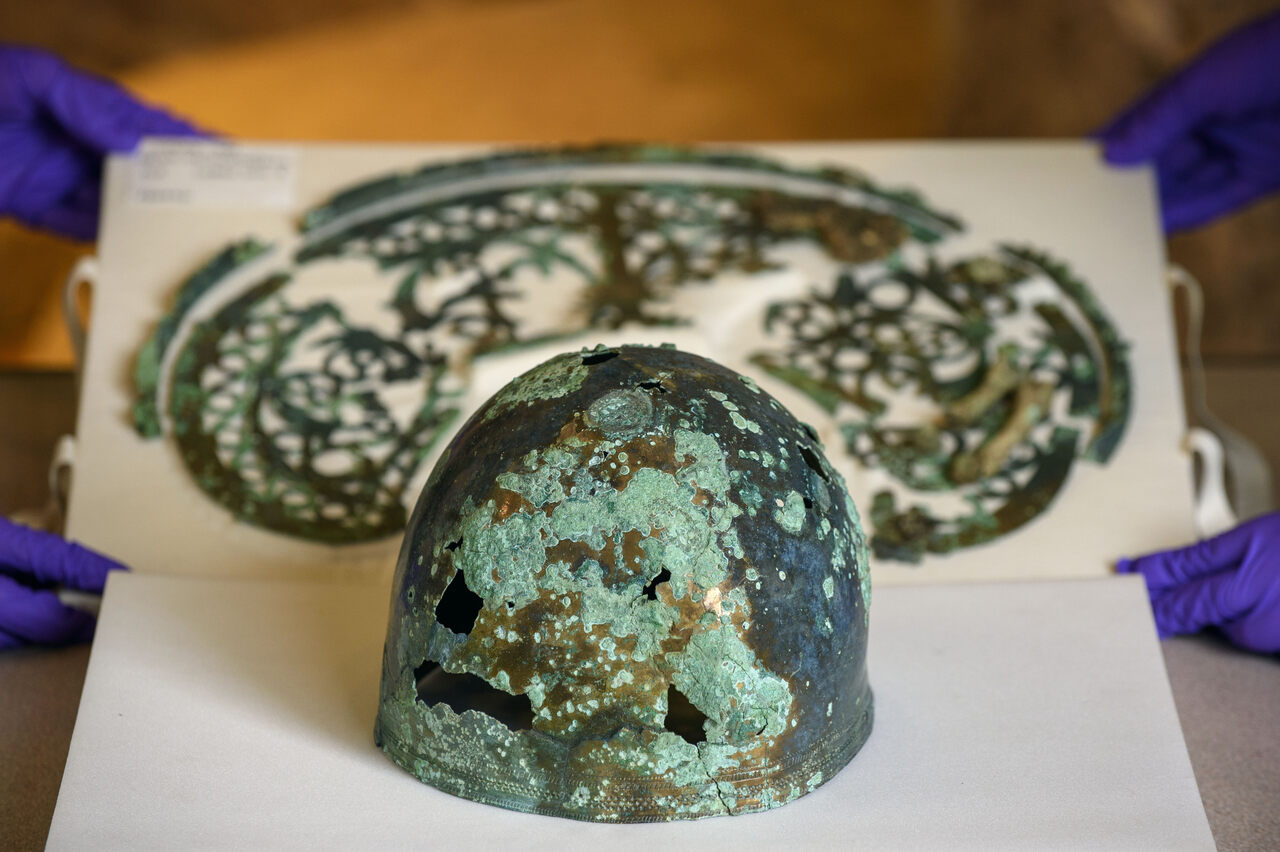 The helmet and headdress of the Bersted Man will be on display for the first time. Courtesy Chichester District Council
In This Story
Destination Guide

A housing development, West Sussex, England. That’s where the Late Iron Age warrior appeared in 2007. It’s the kind of place that most of them show up these days, what with the digging and all. When he emerged, the warrior was clad in dense mud—in his eye sockets, between his ribs—that held his precious cargo in place for more than 2,000 years. After years of analysis and conservation, the material he was buried with will be going on public display, at The Novium Museum in Chichester.

Though he was unearthed about 50 miles from London, archaeologists now believe this ancient fighter, known as “Bersted Man,” may not have been English at all. Analysis dated the skeleton to about 50 BC, during Julius Caesar’s campaign against the Gallic tribes of what is today France. That year might sound familiar to fans of the French Asterix comics series, which had for decades chronicled the adventures of a village of Gauls holding out against the Roman legions. Bersted Man may be a warrior from the same conflict.

Andrew Fitzpatrick, an archaeological consultant at the University of Leicester, says that the isotope analysis they conducted does not operate with “postcode precision,” so the warrior’s country of origin is uncertain, as is his allegiance in the Roman-Gallic conflict. But the items buried with him—an elaborate headdress and helmet, a bent sword, and various other trinkets—tell the story of a soldier of considerable importance for the time, and suggest he was Gallic.

“Many swords similar to the one buried with Bersted Man have been found in northeast France and the ritual of ‘killing’ weapons by bending them is also well-known there, but both are rare in Britain,” says Fitzpatrick. “We think it is most likely that he grew up on the continent. He may have arrived in Britain as a ‘conflict migrant.’”

The historian Plutarch wrote that about a million Gauls were killed in the campaign and another million enslaved. Some Gallic fighters may have absconded to Britannia—not yet governed by the Roman Empire—rather than face the legions.

Though the helmet is of a fairly common style, the headdress is unique, says Fitzpatrick. Given the size and weight of its latticework, he adds, “How the man looked was more important than how practical the headdress was to wear.”

Without the helmet and headdress, the warrior would’ve stood at 5’8”, according to Melanie Giles, an archaeologist at the University of Manchester, slightly above average at the time. But with the elaborate topper, says Giles, “You can imagine this was a most impressive sight.”

There is still much to be learned about Bersted Man, but it is clear that he lived in a time fraught with world-shaping military ambitions that put a variety of cultures into contact with one another. The Gallic Wars ended in a Roman victory, and were vital to Julius Caesar’s trajectory toward domination of the Roman Empire. The holdouts of Asterix’s comics were, so far as we know, pure fiction, like the magic potion that enabled their resistance.

Meet the Scientists Who Pollute Lakes on Purpose

Found: The Site Where Julius Caesar May Have Landed in Britain

Is this Rome's first beachhead in the Isles?
archaeology

Found: An Iraqi City, Established by Alexander the Great and Forgotten for Millennia

Satellite and drone photos clued archaeologists to its existence.
weapons

A Stash of 30 Hidden Bayonets Was Discovered in Valley Forge

“No one has ever found this many together.”
tunnels

2:40
Want to see fewer ads? Become a Member.
From Around the Web
Travel With Atlas Obscura
Are you a curious traveler?
Join local experts in 50+ destinations for a once-in-a-lifetime journey.
View Our Trips
Thanks for sharing!