Meet the Scientists Who Pollute Lakes on Purpose - Atlas Obscura 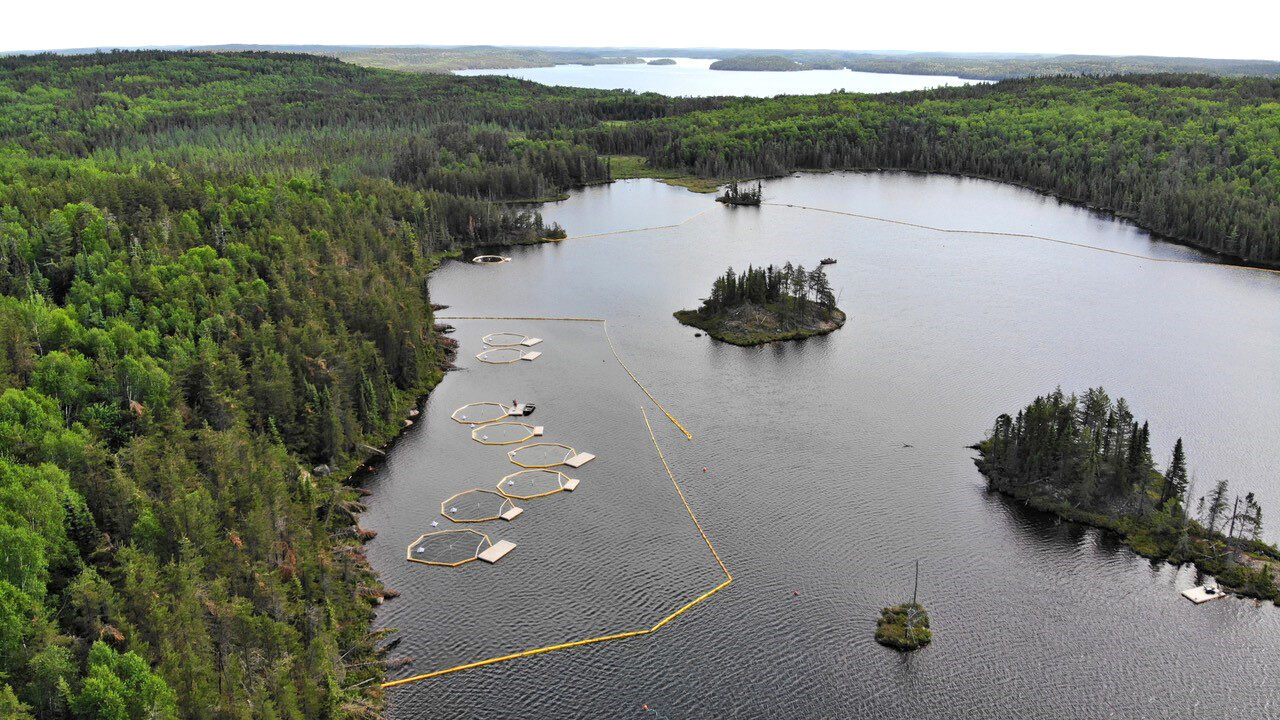 At the Experimental Lakes Area, scientists study the effects of oil on lake organisms. Jose Rodriguez-Gil
In This Story
Destination Guide

On a morning in June last summer, Keval Shah boarded a motorboat on a lake in northwestern Ontario, wearing navy coveralls, rubber gloves, and a respirator mask. He and nine others, all dressed in similar protective gear, were going to do something they had never done before: spill nearly 90* gallons of oil into the lake.

Over the course of the next two hours, Shah and his colleagues—a team of environmental technicians, chemists, boat drivers and photographers—carefully piped the viscous liquid into a series of sectioned-off zones in the lake. “We were all laser-focused,” he says. The operation, part of an ongoing project, was designed to simulate oil spills for scientific research. For the past three summers, scientists have been studying deliberate spills to find out more about how oil affects lakes in boreal regions, forested landscapes that stretch across northern Canada, Russia and Alaska.

The project is one of the first of its kind, says Jules Blais, professor of biology at the University of Ottawa and one of the project’s leaders. Most oil spill studies are conducted inside test-tubes or after accidental spills. These conditions have their limits. Lab experiments can only mimic simplified versions of complex ecosystems. And when disasters strike, the focus is on cleaning up oil as fast as possible, not on collecting scientific data. There is also a lack of baseline information at accidental spill sites. “It’s like arriving at the scene of an accident,” Blais says—you don’t know what happened, how it happened and what was there before, making it harder to compare conditions from before and after. By closely monitoring manufactured spills in boreal lakes, researchers are hoping to gain insight into oils’ effects on the environment in real-world conditions, which could help policymakers and the oil industry develop better ways of managing spills in the future.

Deliberately polluting a lake might seem like a wonky way of protecting the environment. But the International Institute for Sustainable Development Experimental Lakes Area (IISD-ELA), the facility where the research is being conducted, is famous for it. The area consists of 58 small water bodies within a 75-square-mile swath of boreal forest, and for over 50 years, researchers have been using these lakes as real-life labs. They have poured all sorts of pollutants into their waters, including fertilizers, mercury, sulphuric acid and, for reasons you’ll see shortly, estrogen. Seeing how these toxins affect ecosystems, and often entire lakes, has been instrumental to freshwater research and policymaking. “This kind of research has actually resulted in a dramatic improvement in water quality all over the world,” Blais says. The oil spill project comes at the end of a long line of experiments where poisoning one lake has helped preserve many.

This paradox was built into the IISD-ELA right from the start. When the research facility opened in 1968 (then simply referred to as “ELA”), an onslaught of pollution was causing algal blooms, choking oxygen out of the water, and killing fish in Lake Erie, which sits on the border between the United States and Canada. The algal bloom phenomenon, called eutrophication, was poorly understood: A chemical soup of pollutants had been draining into the lake from farms, cities and industrial zones, and researchers didn’t know which pollutant was responsible for triggering the blooms.

Two scientists, Wally Johnson and Jack Vallentyne, were tasked with untangling the root of the eutrophication problem. They thought that whole-lake experiments might provide answers. So they searched through maps to find a suitable spot. They needed an uninhabited region with minimal human influence: No vacation homes, no agriculture, and limited logging.

They settled on a spot about two hours’ drive from Kenora, Ontario, a city on the province’s western edge. “It’s Canadian wilderness at its finest,” says Richard Grosshans, a research scientist with the IISD, the ELA’s parent organization. The area is covered in thousands of small, pristine lakes set in bedrock and bordered by thick spruce and pine forests. Still today, only one gravel road leads into the area, which visitors require a permit to use.

In the late 1960s, the ELA saw its first suite of experiments to test eutrophication. A team of scientists led by David Schindler, now a professor of ecology at the University of Alberta in Edmonton, strung a plastic curtain through the middle of Lake 226 (each lake is numbered). The researchers poured carbon and nitrogen into both sides of the lake, but added phosphorus to only one. Soon enough, the phosphorus-tainted side clouded over with algae. An aerial photo of the experiment became famous. It’s “the single most powerful image in the history of limnology,” James Elser, a biologist from Arizona State University, told Science in 2008 (limnology is the study of inland aquatic ecosystems). The image convinced policymakers that phosphorus should be controlled. In the 1970s, governments in Canada and the United States passed legislation to ban phosphates in detergents.

Since then, researchers have used the ELA for a variety of high impact experiments. From 1976 to 1993, Schindler and his crew poured sulfuric acid into Lake 223, finding that lake organisms suffered at acidity levels lower than what was considered safe. From 1999 to 2007, another team added mercury to Lake 658, demonstrating how the heavy metal exuded from coal-fired power plants can accumulate in food webs. And from 2000 to 2003, scientists discharged synthetic estrogen into Lake 260. This experiment showed that the hormone, which gets released into wastewater in the urine of people who are on birth control pills, causes male fish to develop female traits, eventually leading to population crashes. Overall, the research persuaded governments to adjust water quality guidelines, supported proposed legislation and got policymakers talking.

The ELA is the only place in the world where scientists can manipulate entire lakes and watch the consequences unfold, often over decades, Schindler says. It’s been called “the supercollider of ecology.” Big experiments at the ELA have had a disproportionate influence on policy, says Vince Palace, head research scientist at the IISD-ELA and one of the oil spill project leaders. The science clearly applies to the real world, he says.

Bridging lab experiments and actual ecosystems to better understand the effects of human activities is the ELA’s bread and butter. And the ongoing oil spill study falls right in line with that legacy. Last summer, one team of researchers added oil to eight enclosures throughout Lake 260, mimicking real spills—from small incidents to the 2010 Kalamazoo River spill, one of the largest freshwater spills in U.S. history. The team studied how the oil moved through water and affected organisms, including bugs, fish, and amphibians. They have yet to release their findings.

This summer, scientists created a fresh set of spills in 18 enclosures along the shoreline. Once they discharged the oil, they removed the bulk of it using conventional cleanup methods, such as soaking up the oil with absorptive pads or spraying the shoreline with low-pressure water hoses. There is always a residue left on the shore and on plants, however, Palace says. The researchers want to find the best ways of sopping up that residual oil. They’ll be testing a variety of cleanup techniques, including shoreline cleaners, natural bacteria and floating treatment wetlands—untethered islands of native plants that have shown promise in tests in India and Pakistan.

Experiments like this one and others run by the IISD-ELA, surprisingly, raise little controversy. People typically don’t get upset, and the researchers at the Experimental Lakes Area put a lot of effort into informing the public of their undertakings, says Palace. They hold information sessions with various communities near the research area and post updates on their website as well as social media. They also don’t dump chemicals into lakes willy-nilly. Scientists have to prove to regulators that their experiments won’t have any toxic effects on humans or affect downstream waters. And they are required to return lakes to their natural state within 10 years.

“One of the most important parts of a project like this is not the actual insult,” Palace says. “It’s the recovery.” Now that the oil has been spilled into Lake 260, scientists will probe the soiled sections of the ecosystem for years to come, looking for ways to salvage oil-tainted waters far beyond its shores.

* Correction: This story originally stated 120 gallons, rather than 90 gallons.

The leafy green grows to monstrous size under the midnight sun.
scientists at workenvironmentlakesscience

Help us keep them coming by directly supporting Atlas Obscura.
Become a Member
$5/month $10/month $20/month
See All Membership Options
Already a part of our membership program? Sign in.
No Thanks
Keep Exploring
science

It swims, it slithers, and it samples.
science

The Slippery Problem of Measuring Enormous Hunks of Hail

They’re huge, rare, and melting all the time.
science

In the Era of COVID-19, Fieldwork Is Scrappy and Socially Distant