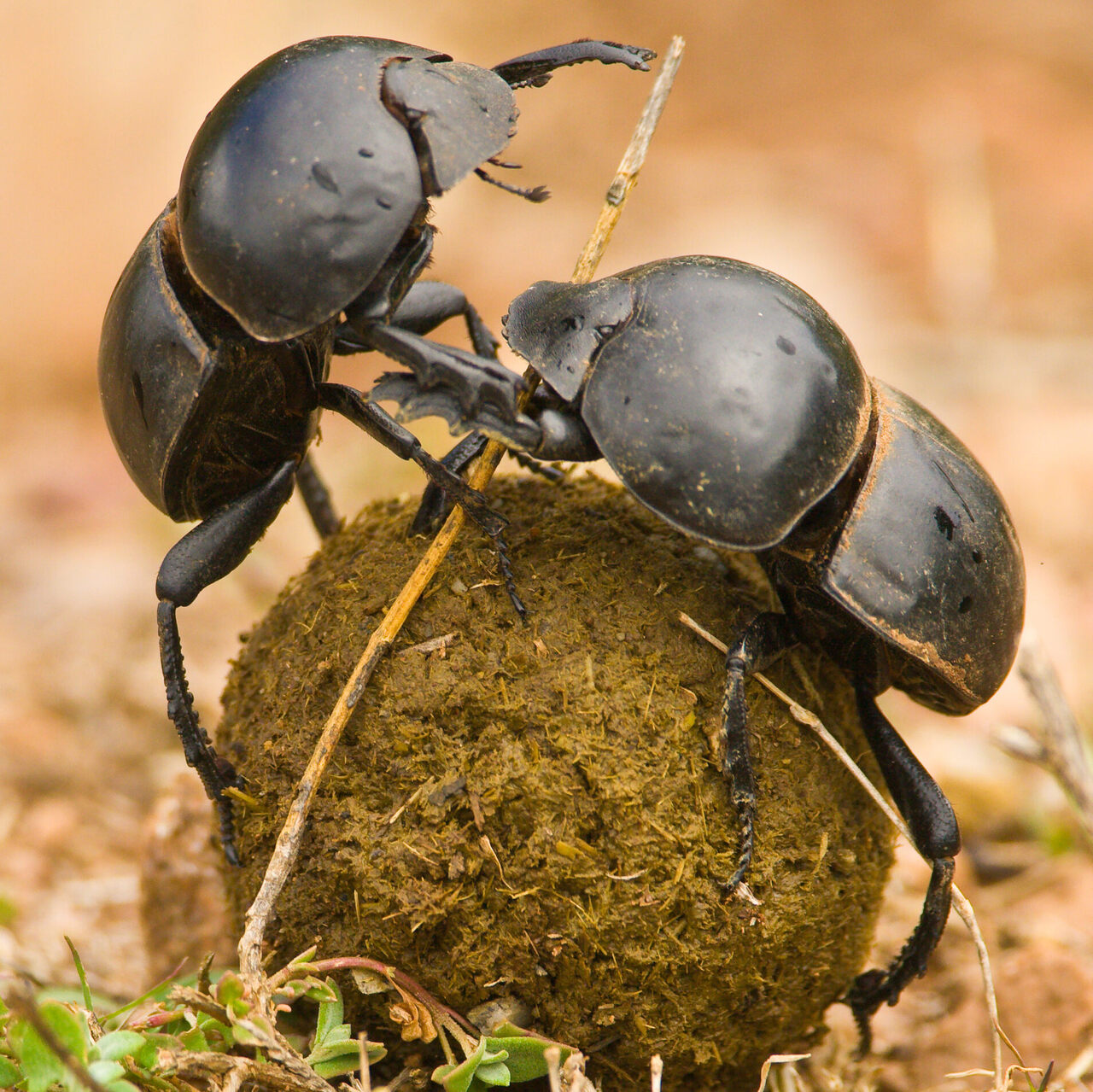 Circellium bacchus, a rare subspecies of dung beetle, is a scarab like no other. South Africa National Parks
In This Story
Destination Guide

Pulled over at the side of the road in South Africa’s Addo Elephant National Park, a handful of motorists are witnessing a remarkable feat unfold. They’re watching with rapt attention as a beetle tries to roll a ball of dung three times its size across the wide gravel road. Head down, seemingly deep in concentration, the beetle moves backward into what looks like a handstand position, balancing on its two front legs as its back legs propel the sand-covered sphere forward.

It’s not the ball that’s giving the beetle problems. Nor are the small divots and pebbles in the road (though they do cause some backtracking). The real issue is that another equally determined beetle appears to be trying to steal the parcel of poo. Such thievery is common among dung beetles—often called “rollers” for obvious reasons—which fight over the precious droppings that constitute their food, their mating chambers, and their egg incubators.

Apparently unimpressed by the miniature spectacle that’s transpiring, some park visitors don’t stop but drive on in search of a more traditional safari show. One beetle-loving bystander won’t stand for it, though. Jumping out of his car, he stands in the middle of the roadway and flags down the next vehicle, insisting that it pull over and wait until the beetle has completed its trek. Cowed, the driver does as directed just in time for observers to see the second beetle make off with its purloined poo, crossing over to the other side of the roadway. Bereft of its precious haul, the first beetle—defeated—heads off toward the grass to look for a new pile of elephant dung.

Such are the daily dramas of Addo’s flightless dung beetles.

Addo Elephant National Park has, as its name implies, one of the largest concentrations of elephants in the world. But it’s the park’s much smaller, less photogenic residents that often steal the show. While there are nearly 800 species of dung beetle in South Africa, Circellium bacchus—the flightless dung beetle—is a rare subspecies endemic only to a few small areas in the southeastern part of the country. The largest known population lives at Addo.

Conservationists believe these insects once populated much of the country. But as some of the beetle’s favorite poo producers—big game like buffalo, elephants, and rhinos—died off, so too did the beetle, which could not flee to new territory as easily as its winged relatives.

But there are other reasons for the rollers’ rarity, says Catherine Sole, a zoologist and entomologist at the University of Pretoria.

“The charismatic creature, who is among the largest of the African ball-rolling scarabs, is dependent on a constant supply of dung for feeding and breeding,” she writes in an email. “It’s thought to be prone to extinction (qualifying as ‘vulnerable,’ according to the IUCN) because of its large body size, low dispersal capability, narrow geographic range, and low fecundity … It only produces a single offspring per year, for which it exhibits a high degree of maternal care.”

In other words, if you’re a dung beetle, being a doting mother—while admirable—can have a negative effect on overall numbers.

Addo’s expansive elephant population makes it a haven for the scarce arthropod. Driving through the park, it’s common to see huge mounds of elephant dung swarmed by dozens of flightless beetles. The creatures pour over the still-warm excrement—fresh poo being particularly desirable, because the temperature makes it easier to sculpt into spheres—then spin off sections into individual balls that each beetle pushes to its own tiny, private corner of Addo. Once safely away from its fellow rollers, it will go about eating its prize or using the interior of the ball to mate and lay eggs.

A malaria-free, Big Five safari destination, Addo is proud of its status as a beetle sanctuary, and takes its role as protector seriously. On its website, the beloved bug is described as “king of the road.” The park is peppered with signs that warn visitors that the beetles have the right of way, and that it’s forbidden to drive over balls of dung (lest a mating couple or precious egg be hiding inside).

“The flightless dung beetle should serve as a powerful lesson that we need to conserve all species,” says Graham I.H. Kerley, director of the Centre for African Conservation Ecology and a dung beetle devotee, “not just the iconic megafauna. Otherwise our ecosystems would no longer function. Who would deal with all that dung if we lost the dung beetles? It should also teach us some humility, as we realize just how charming such small species really are when we bother to pay attention to them.”

Whether or not you’re an avid fan of insects, there’s something about Addo’s beetles that stirs people’s passion. Wildlife watching, which normally requires participants to stay in the safety of their car or a ranger’s vehicle, can often be a solitary experience. Yet the beetle brings out visitors’ social side. Despite park warnings to “Beware of lions: Alight from vehicle at own risk,” people here routinely get out of their cars and huddle together near a mound of dung to watch the beetles at work—from a respectful distance, of course.

South Africa’s tiny, flightless dung beetles give visitors a number of big gifts: a chance to cheer on the underdog, appreciate Africa’s less glamorous game, and relish the one-of-a-kind opportunity to help a beetle cross the road.

The wildcats are an example of resilience and adaptation.
insects

When the Sun Is High, Dung Beetles Navigate With the Wind

There's more than one way to get from point A to point B while rolling a ball of dung.
national parks

In Angola, Conservationists Make the Case for a Massive New National Park

In the Namib Desert, slaking thirst is a slow process.
Read more
Thanks for sharing!