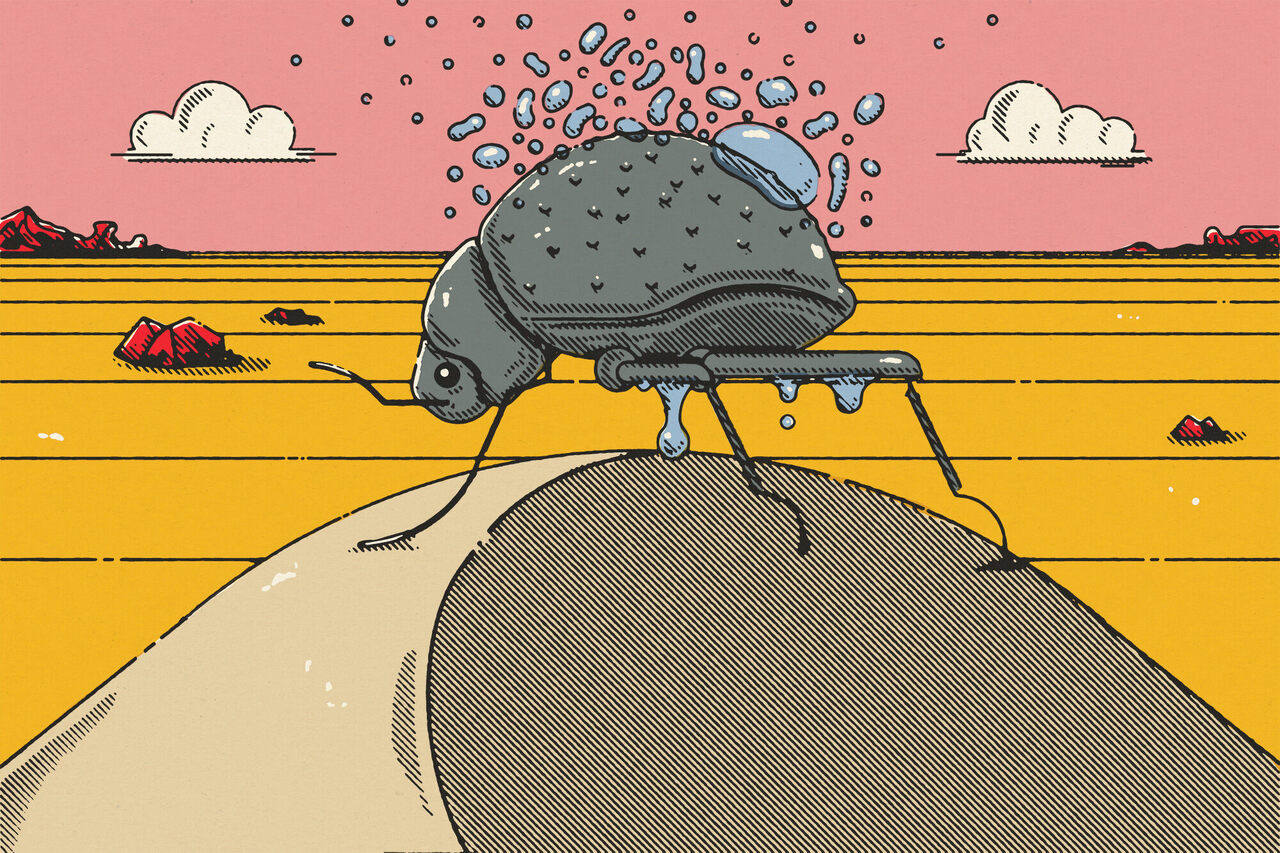 How do animals survive in harsh environments? This week, we’re celebrating some extreme desert-dwellers. Previously: the worm lizard that beats the heat by never coming to the surface.

As night gives way to morning, portions of southern Africa’s Namib Desert—one of the most rain-starved places in the world—are enveloped by fog. It blows in and beads on tufts of grasses, and hangs low around the dunes, making their tops look like mountains peeking above clouds. It stamps out visibility such that it sometimes appears that you’re glimpsing a scene through a lens smeared with vaseline.

In a place where rain is so rare, the fog can help sustain life. It’s a crucial companion for the Stenocara gracilipes, also known as the fogstand beetle.

On soupy mornings, the beetle scampers up damp dunes and prepares to harvest the fog. It sticks its rear end up in the air at about a 45-degree angle, and then it waits. This behavior is charmingly known as “fog basking.” A dune might be covered with scores of the little beetles, all standing perfectly still as they wait for a glug.

The beetle’s skin is equipped with all of the things that it needs to slake its thirst. The key is a mix of hydrophilic and hydrophobic bumps and valleys on the skin. These prevent droplets from being dispersed in the wind, and when they get large enough, they roll down the beetle’s body and straight into its mouthparts. It’s not as quick and easy as taking a swig from a glass (though the little beetles have inspired designs for self-filling water bottles), but hey—it gets the job done.

In Addo Elephant National Park, the smallest residents may be the biggest draw.
deserts

The Transformation of Namibia's Etosha Pan, From Parched to Soaked

Satellite images track the shift from dry to wet at a vast, prehistoric lake bed in southern Africa.
nature

When climate change comes for attractions like Victoria Falls, visitors can find new ways to appreciate them.
farms