In Zambia, a Craze for a Traditional Treat Is Endangering Wild Orchids - Gastro Obscura
Want to see fewer ads? Become a Member. 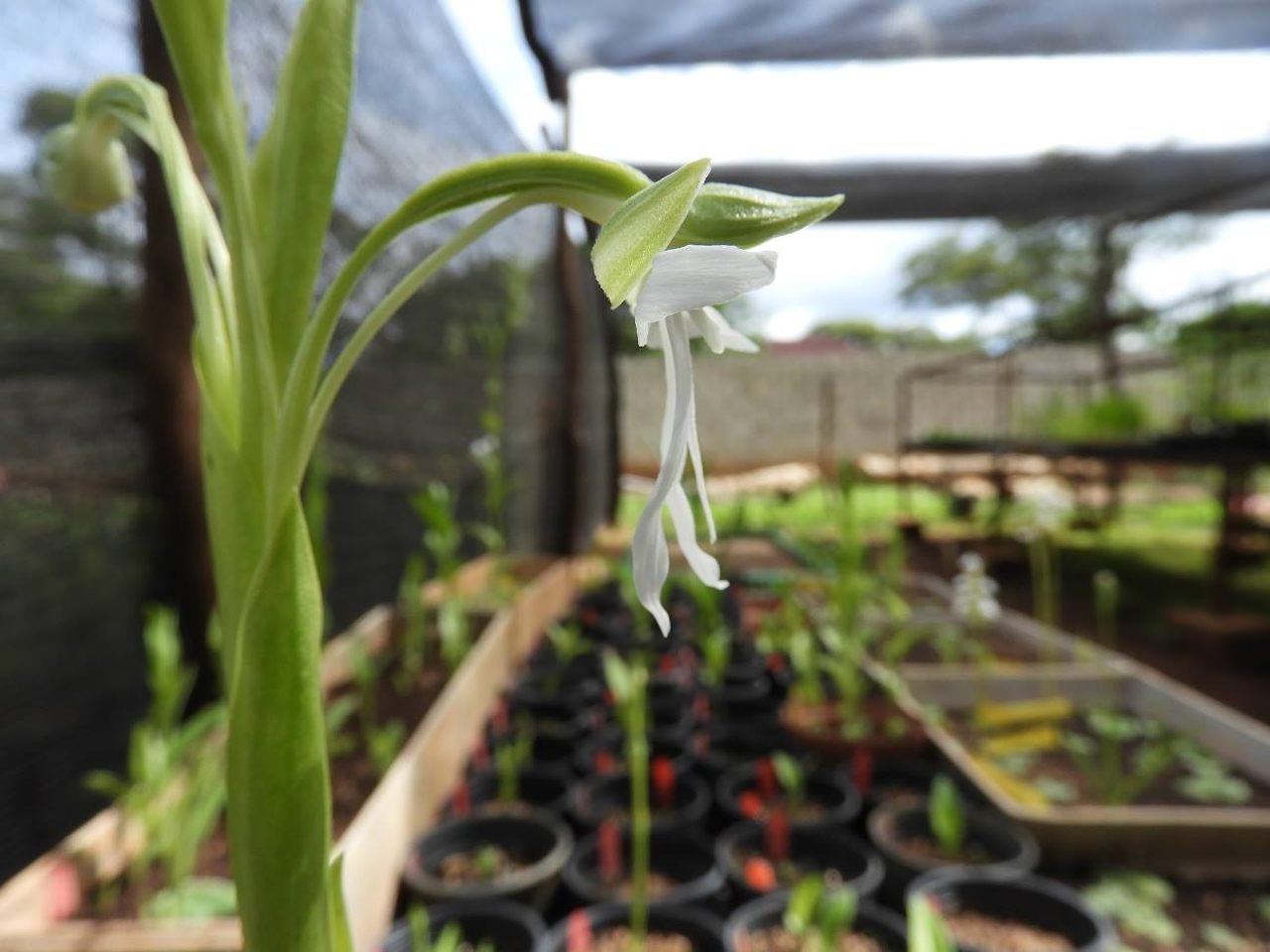 Researchers attempt to grow wild orchids in greenhouses. Nicholas Wightman/Used with permission
In This Story
Food

A flour made from orchid roots makes for a popular Turkish drink.
Destination Guide

When relatives visited Brighton Kaoma’s childhood home in the Copperbelt Province of central Zambia, they’d come bearing gifts: oblong brown chikanda, freshly dug from the earth of the family’s ancestral village. The tubers weren’t from yams or potatoes. Instead, they were foraged from the wild orchids that dot the dambos, or grasslands, of northern Zambia, their ornate blossoms shocks of color in the marshy knolls

Kaoma’s family, who belong to the Bemba people of Zambia’s Northern and North-Western Provinces, would grind the tubers with peanuts and chiles, then boil them with water and soda to form a cake. Also called chikanda, this brown-speckled, earthy loaf—sometimes referred to as “African polony” for its bologna-like texture—bears the unique flavor of each wild tuber species used in its creation.

Chikanda was a traditional food for lean times, when Bemba women and girls combed the dambos for the tubers they considered a god-given resource. But for Bemba people like Kaoma, who grew up in cities, chikanda is a special occasion food, served at weddings and to honor guests. It’s so integral to Bemba tradition, new brides often make the dish for their husbands’ families to show respect—and to show off their cooking. When family members prepared chikanda for him growing up, Kaoma says, “I would feel highly respected.”

Today, though, vendors hawk slices of chikanda to hungry shoppers on the bustling streets of Zambia’s capital, Lusaka, and to bleary beer-drinkers in bars. In the rapidly growing city’s glossy new supermarkets, chikanda is on the shelves. At large restaurants, it’s on the menu. In the past decade or so, says Kaoma, cofounder and executive director of the Lusaka-based youth nonprofit Agents of Change, this food of rural scarcity has become an urban trend.

“People are going back to the traditional food,” says Royd Vinya, Dean of the School of Natural Resources at Zambia’s Copperbelt University, who oversees the university’s chikanda sustainability project. At a time when indigenous diets across Africa are increasingly challenged by corporate agriculture and fast food chains, Vinya says, “Everybody wants to get connected back to where they came from.”

But there’s a catch. While the craving for chikanda may represent a yearning for rural roots, skyrocketing demand for the snack has depleted Zambia’s wild orchid population. Since the flowers are notoriously difficult to cultivate in captivity, conservationists fear the craze may wipe wild orchids off Zambia’s map.

Orchid overharvesting isn’t just a Zambian problem. A booming illegal orchid trade threatens many of the world’s more than 20,000 known orchid species. The growing popularity of tuber-based Turkish salep, a warm, wintertime drink, has decimated orchid populations in the Middle East. Meanwhile, increasing demand for chikanda in urban Zambia has led to the import of the tubers from nearby Tanzania, Angola, and the Democratic Republic of Congo—a trade that is exporting the risk of overharvesting abroad.

This isn’t just bad news for orchids. Rural women in Zambia’s northern regions rely on chikanda for subsistence and, increasingly, for income. Due to dwindling wild supply, it now takes hours to gather the tubers they could previously collect in minutes. While chikanda is more lucrative than the subsistence agriculture communities are accustomed to, collectors lack direct access to urban markets, and often don’t know how much their wares are truly worth. “They are being taken advantage of by people who are coming from the city,” Vinya says.

Meanwhile, market pressures have pushed collectors to abandon traditional sustainability practices. While in the past, foragers would only harvest tubers after the plants had spread their seed, and would replant the stalk in hopes that the chikanda would regenerate from it, locals have largely abandoned these practices. “What we are seeing is massive exploitation of the plant,” says Paul Mumba, a plant breeding specialist at Copperbelt University.

For Kaoma, chikanda’s exploitation is part of Zambia’s broader struggle to develop sustainably. He grew up in Copperbelt Province, where mines made the air so thick with toxic sulphur dioxide he often couldn’t see through the haze. “I was 14 when I realized that my community was dying slowly,” he says. Kaoma co-founded Agents of Change in response. He sees the creation of a sustainable chikanda trade as vital for environmental and economic justice.

Kaoma isn’t alone. Agents of Change Foundation is part of a coalition, alongside researchers from Copperbelt University, Sweden’s Uppsala University, Zambian NGO Sanga Research and Development, and the U.K.’s Royal Garden at Kew, that has collaborated since 2016 to create a more sustainable chikanda trade. Funded in part by the U.K.’s Darwin Initiative, the partners share a common goal: to develop a chikanda cultivar that communities can farm for profit.

To determine which chikanda species are under the greatest threat, researchers began with the basics. Because chikanda are wild and their trade unregulated, scientists don’t actually know which orchid species are most severely impacted. By the time chikanda arrive into Lusaka’s bustling markets, the irregular brown tubers are indistinguishable by species. So building on work begun in 2014, project partners from the de Boer lab at Sweden’s Uppsala University used DNA barcoding to catalog the wild orchid tubers by species.

Travelling the marshy grasslands and bustling markets of Zambia and neighboring Tanzania, researchers collected tissue samples from chikanda tubers and even the spicy, savory cakes themselves. By comparing the material with the genetic profiles of known varieties, researchers found 16 distinct orchid species used in the trade. If chikanda producers continue harvesting wild orchids, this diversity will be lost.

Researchers are using the results of the DNA survey to target conservation efforts toward the most vulnerable species. But they also hope to eliminate the need to gather wild orchids at all, by developing a chikanda cultivar that local communities can farm. In the labs and greenhouses of Copperbelt University, chikanda seedlings sprout in plastic bins and unfurl dainty white blossoms from grey pots. But developing a commercially viable chikanda strain is no easy task.

Orchids are exquisitely adapted to the climate they evolved in, says Jonathan Kendon, lab technician at the Royal Botanical Gardens in Kew. But that means they’re notoriously finicky outside it. They’re agonizingly slow-growing, with Zambian orchids taking 18 months to two years to mature into full-grown plants—speedy compared to the 10-year maturation period of some species. And while other tubers, like potatoes kept too long in your cupboard, can grow multiple new plants from the dimpled “eyes” on their surface, chikanda tubers only have one eye, meaning that most of them can only produce one offspring. Meanwhile, chikanda seeds are tiny, dust-like, and delicate, dependent on a symbiotic relationship with a local fungus to sprout. “It’s one complicated seed that gives you a lot of hell,” says Mumba.

Because of these challenges, researchers estimate that it will take up to 10 years to create commercially viable chikanda strains. In the meantime, Vinya’s team is working with local communities to ensure the chikanda boom benefits the people who traditionally gather and prepare the tubers. The challenge, says Kaoma, lies in regulating the market to meet conservation goals while also respecting indigenous people’s right to the land.

To address this tension, Vinya’s team is working with chikanda producers in three Northwestern Province villages to create community conservation plans, written in their local language and accessible across literacy levels. In these plans, chikanda gatherers envision better collective management of dambos and more direct market access for the women whose labor powers the industry.

Guni Kokwe, co-founder of Sanga Research and Development, says that communities have yet to hit on a surefire sustainability plan. But, Kokwe says, one thing is for certain: “If there’s going to be a solution for this, it’s going to be a local solution.”

A Visual Guide to the Creatures That Could Disappear From Each U.S. State

Bake an old-timey cake from this handwritten cookbook.
botanical gardens

Minnesota Wants to Pay You to Care About Bees

Won't you please spare a thought (and some lawn space) for the rusty patched bumblebee?
art