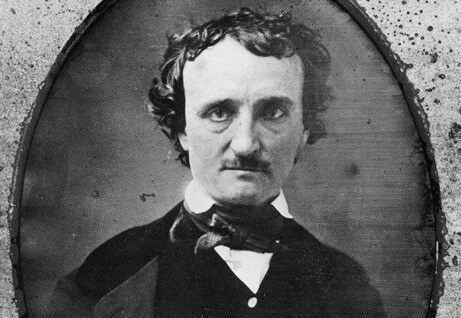 Edgar Allan Poe in 1849. Wonders and Marvels/Public Domain
In This Story
Place

A 19th century library favored by Edgar Allan Poe and H.P. Lovecraft, known by locals as "the Ath."
Place

This museum devoted to the gothic author holds such interesting ephemera as his socks and walking stick.
Place

The trials and tribulations of marking Poe's grave.

Edgar Allan Poe pioneered a distinctly American brand of gothic horror and romanticism, and introduced the short story to the literary tradition. Yet throughout his career he never received much fame or money. “The Raven” was his best-known work, for which he was paid $9. Poe spent his life traveling up and down the Atlantic coast, working odd jobs and performing parlor readings to make ends meet, going from one failed relationship to the next. He ultimately died with no family, raving mad in the streets of Baltimore.

As if in an attempt to rectify Poe’s lack of success, numerous locations of import during his lifetime have been posthumously dedicated to him, or at least honor his presence there. Here are 10 places in the Atlas that trace the footsteps of America’s master of macabre.

Edgar Poe was born to two actors in Boston on January 19, 1809, and tragedy hung over him from the start. Both of his parents died within a year of each other before he was two years old. Edgar was sent to live with a wealthy family in Richmond, Virginia, while his two siblings were sent to other homes. The Allan family never formally adopted him but did bestow their surname upon him, and thus he became Edgar Allan Poe.

Despite his brief stay in Boston, an intersection near his birthplace was named “Edgar Allan Poe Square” on the 200th anniversary of his birthday.

Life with the Allans was comfortable. The family traveled frequently, allowing the young Poe to be educated across Europe and the American Northeast. However it seems Edgar was never able to live up to his foster father’s expectations. At 17 he was engaged, but he racked up gambling debts and garnered a reputation as a drinker, and his betrothed married someone else.

Poe returned to Richmond often throughout his life, but Richmond never returned his affections. It wasn’t until the 1920s brought about a revival of his work that the Edgar Allan Poe Museum opened to chronicle his experiences in Virginia.

In search of a purpose, Poe enrolled in the new University of Virginia to study ancient languages in 1826. Despite being a good student, he didn’t find satisfaction in his studies and dropped out after just a year. He claimed his father refused to help him pay his debts.

In the 1920s, the secret “Raven Society” restored Poe’s former dorm room to its 1820s conditions, complete with furniture owned by the late poet. The room functions both as a miniature museum and the site of midnight induction ceremonies to this day.

Poe’s next endeavor was a military career. He was stationed at Fort Independence in Boston harbor. Though he at first seemed to enjoy the life of a cadet, he soon began to shirk his duties. Instead of appearing for drills, Poe could be found wandering along the water.

During this time he published his first book of poetry under the name of “A Bostonian.” Only 50 copies were printed, which Poe is believed to have paid for himself. His fellow cadets donated 75 cents apiece to publish Poe’s next book, believing it would contain the comedic poems lampooning military life Edgar had regaled them with. Instead, they were serious poems like “To Helen” and “Israfel,” and were much derided by the cadet corps.

He transferred to West Point Academy, and by 1831 was dismissed from the service for “gross neglect of duty and disobedience to others.” Though he was not fond of his time in the military, it seems it had some effect on him. Fort Independence is believed to have inspired the setting of the duel in “The Cask of Amontillado.”

Poe’s adoptive mother died while he was in the service. His father, whom he had become estranged from over mounting gambling debts, had remarried and had a son. This meant that Edgar, formerly the prospective Allan heir, was left without a proper inheritance.

Despite his lack of success, Poe decided to pursue his career as a writer. He traveled to Baltimore to be with his biological aunt, Maria Clemm, with whom he had become close. He met her daughter, his cousin Virginia. Though she was a child, she would be the object of Poe’s romantic obsession for the rest of his life. They were married in 1835, when he was 26 and she 14.

Over the following years he experienced small successes. The growing periodical journal industry was an outlet for his short stories and poems, some of which were well received. Edgar, Virginia, and Maria moved to Philadelphia, where much of the publishing industry was located.

He held several jobs at various magazines and even a government position at the Philadelphia Customs House, but was fired from each of them after appearing at work drunk. Poe also began a number of literary magazines himself, each one a flop. It was around this time that Virginia began to show symptoms of tuberculosis, coughing up blood while she sang at the piano.

“The Raven” became one of Poe’s few successes. After its publishing in the Evening Mirror he became a household name. The couple relocated to New York, where he became the editor of the failing Broadway Journal. Virginia’s condition only worsened, and so did Edgar’s drinking. She died at the age of 24 in their rural cottage in the Bronx.

Poe plunged into a deep depression. He largely supported himself through speaking engagements, occasionally “nurturing friendships” with the lovely ladies who admired his work. One plaque in Massachusetts commemorates such an occasion.

He may have been seeking stability in a wife, or at least solace in the arms of a lover, but inevitably each of the relationships ended badly. He came closest to finding happiness again with Sarah Helen Whitman, who introduced herself to him through letters. She was his perfect match, a Spiritualist poet who wore a coffin-shaped pendant and hosted weekly seances. He proposed to her in a cemetery, and she consented on the condition that he never touch alcohol again.

Two days before their wedding, when the couple was at the Providence Athenaeum, an anonymous person slipped Sarah a note informing her that Edgar had been drinking that morning. In tears, she broke off their engagement there in the stacks, dashed home, and drowned her sorrows in ether. The two never saw each other again, and Poe would be dead within the year.

He was living in Richmond in September 1849, when he left for New York. He never arrived and no one heard from him for a week. On October 3rd he was discovered sick and wearing a stranger’s clothes in Baltimore, outside the pub and pop-up polling place Gunner’s Hall. He was taken to Washington College Hospital and treated by a Dr. Joseph E. Snodgrass.

Poe was delirious, too far gone to explain how he had found himself in these circumstances. He continually asked for someone named “Reynolds” and his wife in Richmond (he was not married at the time) before dying alone on October 7. The cause of his death remains unknown: Historians and scientists have proposed everything from rabies to syphilis to being drugged by election riggers.

Washington College Hospital no longer exists, and the formerly seedy avenue where Poe was discovered is now a developed and polished neighborhood. However, Baltimore ghost tours still claim Lombard Avenue is haunted by the unfortunate poet’s specter.

Poe was buried toward the back of the graveyard in a cheap casket with no headstone. His funeral service lasted all of three minutes, and was attended by a handful of relatives as well as his doctor. The sexton elected not to deliver a homily because the crowd was so small.

In the 1870s, a poet visited Poe’s grave and wrote an article lamenting its neglected condition. A Baltimore public school teacher raised funds for a fitting monument to Poe, which was placed at the front of the churchyard. Poe was exhumed, and the diggers were said to have recognized his distinct features in his skull. He was reburied underneath his new marble monument along with Virginia and her mother.

Edgar Allan Poe’s writings influenced generations to come, but so did his person. His tragic life was riddled with melancholy, from loves lost to works rejected. Perhaps in order to right these disappointments, Poe’s modern-day admirers have hoisted him onto a pedestal scarcely rivaled by other writers. Not to mention the fact that mundane items which belonged to him are now priceless treasures: The Edgar Allan Poe museum proudly displays a pair of his socks, while strands of his hair can go for thousands of dollars. The raven that inspired his most famous poem is on display at the Philadelphia Free Library.

Poe-lovers have a personal relationship with their author, whose personal torments seep through his writing. Nowhere is this bond better evidenced than in the mysterious Poe Toaster. From the 1930s until 2009, a dark figure in a wide-brimmed hat appeared at Poe’s grave every January 19 to wish him a happy birthday. The figure arranged three roses on the monument, raised a glass of cognac, and left without a word, as if straight off the pages of “The Masque of the Red Death.”

Hawaii's 'Lava Fire Hose' Is Back at It Again

It's been spurting candy-colored lava for over a month.
edgar allan poeliteraturebooks

Help us keep them coming by directly supporting Atlas Obscura.
Become a Member
$5/month $10/month $20/month
See All Membership Options
Already a part of our membership program? Sign in.
No Thanks
Keep Exploring
literature

In a letter to her sister, the novelist politely recounts a grisly scene.
libraries

How to Take a Literary Pilgrimage in the Real World

He revised and revised whenever he took his show on the road.
Video

At the College Street market in Kolkata, India, independent booksellers fear the arrival of a massive mall.
Read more
Thanks for sharing!