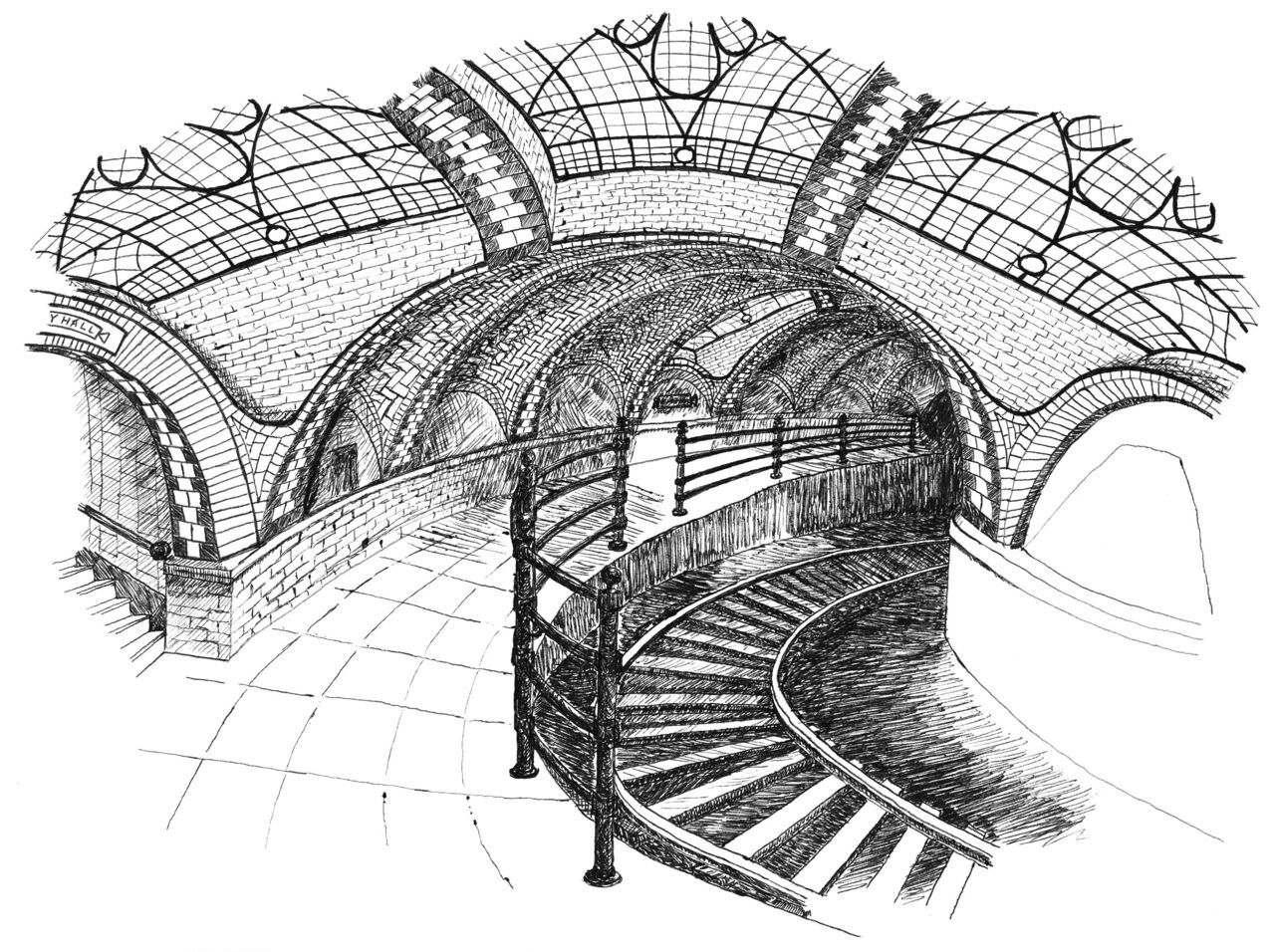 The subway doors slide open, commuters shuffle in and out, and swarm the platform. Philip Ashforth Coppola doesn’t seem to notice the bustle at all. He stays put, feet planted, close to the wall, flicking his eyes between the tiles and his notebook. He inches a blue pen across the page, making hundreds of precise vertical lines. He’s copying every single tile and other details that all those commuters barely register. There are a lot of them.

Coppola has spent four decades documenting and annotating the architectural features of the New York City subway system in a series of exacting pen-and-paper sketches. While the drawings are black and white, Coppola jots down the colors, from cobalt to peach, and orange ochre to viridian.

It’s work of great attention, and chronicling the art and architecture of each and every station has taken a lot longer than he thought it would. “I’ve spent a lot of years on it, but I haven’t accomplished that much,” he says in a 2005 documentary. That, of course, depends on how you look at it. Coppola has made his way through 110 of the city’s 472 stations. His 2,000 sketches have consumed 41 notebooks.

Jeremy Workman, who directed the documentary, and his coeditor Ezra Bookstein sifted through all of those notebooks to select 120 sketches for a slimmer, curated volume, which will be published by Princeton Architectural Press next month. An exhibition of Coppola’s work is also on view at the New York Transit Museum’s gallery at Grand Central Terminal. Both have the feel of a mid-career retrospective of an artist who has many more sketches ahead of him.

The book is titled One-Track Mind: Drawing the New York Subway, but Coppola’s gaze roams far beyond the tracks themselves. The city’s stations are, to a greater or lesser degree, heavily ornamented with mosaics, reliefs, plaques, and more. Such decorative elements were practically prescribed by the city’s first transit contract, in 1900, which reminded architects to envision stations “with a view to the beauty of their appearance, as well as to their efficiency.” While beauty and efficiency are probably not what most New Yorkers think of when they imagine the subway, one must admit that the stations aren’t boring. And Coppola aims to prove it, one mosaic at a time.

Once an art student, Coppola became fascinated with the ornamentation dating to the early years of the century-old system, and started sketching it in 1978. He gravitated in particular to the work of architectural firm Heins & LaFarge, which was commissioned to create Brooklyn’s grand Borough Hall station. “It’s like the Roman Empire come to life, it’s such a regal station,” he told The New York Times. “It’s simply the height. The apex.”

Coppola is, as Bookstein and Workman put it in their introduction, “part outsider artist, part master draftsman, part preservationist.” He has reproduced some of the dizzyingly detailed faience plaques that narrate the city’s history: at Fulton Street, a 1905 depiction of a steamboat churning up the Hudson, for instance, or, at Grand Central, a chugging locomotive. Other sketches are of places that most commuters won’t ever see, such as the old City Hall station, which closed to trains in 1946 but occasionally opens for tours. Coppola has carefully copied its vaulted ceilings, ornate ticket booth, intricate brickwork, looping tracks, and mosaic leaded-glass skylights. Their color in his telling? Amethyst.

Many of the other mosaics, plaques, flourishes similarly aren’t seen by most commuters, but not because they’re hidden or closed off. People just don’t notice them amid the buskers, crowds, delays, and irritated claustrophobia of commuter life in the Big Apple. Riders can be forgiven for forgetting how wondrous the subway can be. But Coppola’s work is a compelling reminder to slow down, step out of the throng, and look closer.

They were discovered with drones.
subwaystrainstransportationarthistory

A new book collects 33 routes that went off the rails.
subterranean

This photographer took on Berlin's entire U-Bahn network, one station at a time.
infrastructure

The Planes, Soviet Trains, and Rare Automobiles of North Korea

The Job That Will Let You Do Whatever You Want in a Swedish Train Station, Forever

Or at least until you want to do something else.
Read more
Thanks for sharing!