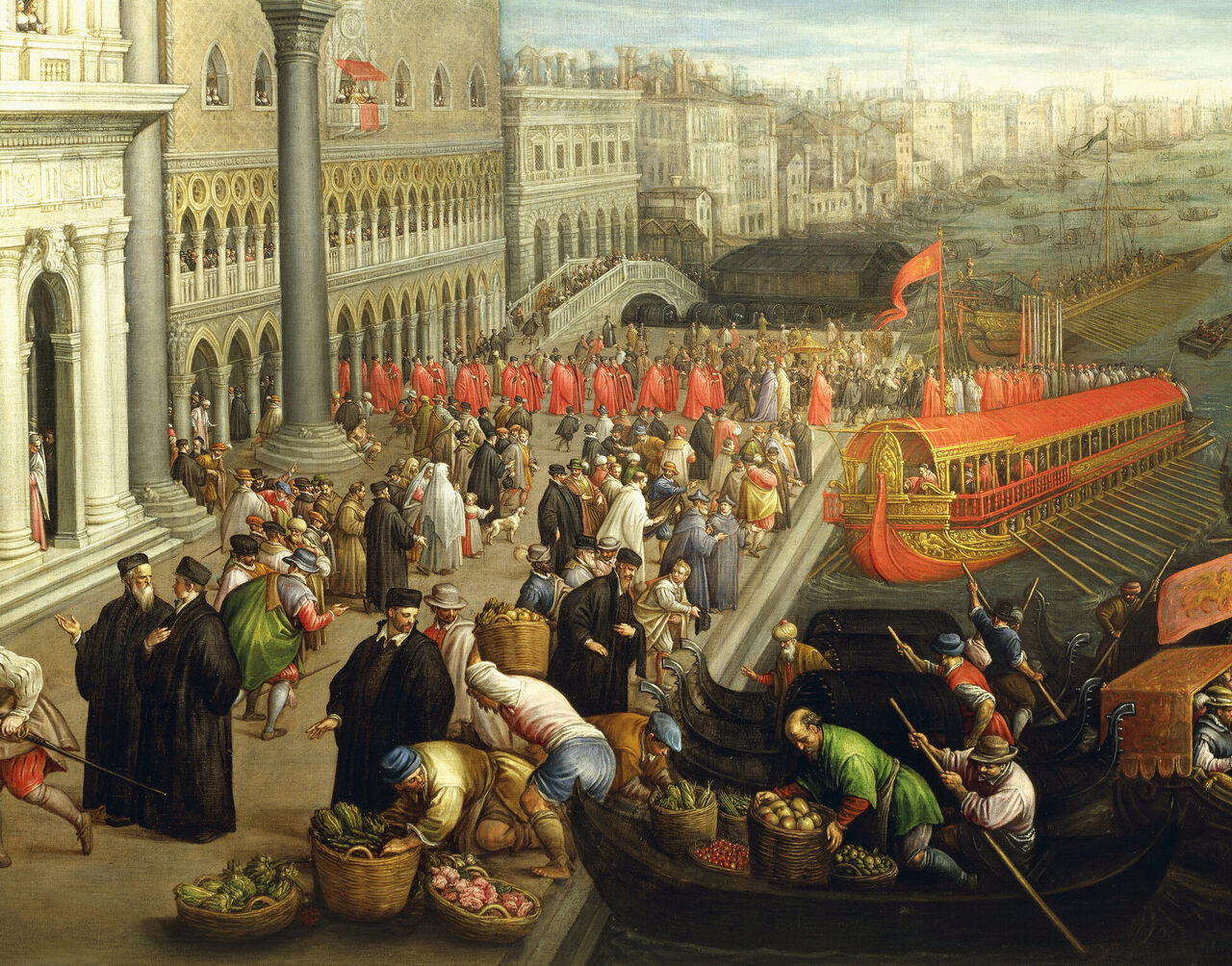 The banks of the Schiavoni in Venice, painted by artist Leandro Bassano (1557-1622). DEA / G. DAGLI ORTI / Getty Images
In This Story
Destination Guide

In 1516, in the locked back rooms of the Venetian governor’s palace, the city’s first professional cryptanalyst, Giovanni Soro, was hard at work trying to decipher an intercepted letter. Venice and its allies were winning the War of the League of Cambrai, just one among the drawn-out Italian Wars that embroiled almost all European monarchs., But the Venetians were unsure of the status of their rivals. The encrypted letter had been sent on April 3 from the enemy Captain Marcoantonio Colonna to an ally, the German Holy Roman Emperor Maximillian. In the letter, he begged Maximilian for financial assistance. “If the money is not sent within eight days, the Swiss soldiers will leave,” Marcantonio wrote. Soro struggled to uncover the contents for several days, and on April 8, he finally cracked the code. Within the year, Venice would be victorious.

A somewhat secretive figure due in part to his chosen profession, Giovanni Soro was a talented cryptanalyst. He could decipher texts in Latin, Italian, French, and Spanish. In 1506 he was appointed Venice’s official cryptanalyst by the Council of Ten, the governing body that ruled the Venetian Republic. He deciphered encoded dispatches and missives intercepted from other diplomats and designed codes to protect Venice’s own diplomatic correspondence. He also went on to establish what would soon become the most elaborate cryptographic organization of the early modern period, what some historians have called the first professional cryptographers.

The 16th-century Republic of Venice was not the first government to use cryptography and cryptanalysis. Renaissance Venetians who read the Latin classics of the Roman Empire would have been familiar with ancient codes as recorded by the historian Suetonius in his book Lives of the Caesars. In two passages he described how Julius Caesar and his protégé Augustus used substitution ciphers—“B for A, C for B, and the rest of the letters on the same principle, using AA for Z”—in their private correspondence to protect military and “confidential” information.

Although cryptography wasn’t new in the 1500s, it was newly relevant. The demand for government secrecy was a part of larger political changes in the early modern world. During the 15th century, Italian states became more powerful, and rulers increased their military presence and strength. This in turn led to more states interacting through diplomats and agents in order to negotiate and handle conflict faster. Or as historian Matthew Anderson puts it, Italian city-states “competed with one another intensely for power, for territory, in the last analysis for survival.” These intimate connections encouraged monarchs to secure their correspondence about military movements, marriage alliances, and other confidential information with their diplomats.

The northern Italian city of Mantua, for instance, used cryptography to protect and strengthen its growing military. Surrounded by the more illustrious cities of Venice, Genoa, and Milan, Mantua fell into the hands of the Gonzaga family following a coup d’etat in 1328 and faced challenges on several fronts. Under Francesco I Gonzaga (1366-1407) the city built the castle of San Giorgio and successfully defended itself against attacks from Milan. Francesco also used cryptography to protect his letters from his opponents. When penning correspondence to the king of Hungary in 1401, Francesco’s secretaries employed the first homophone substitution cipher, which not only mixed the letters of the alphabet with new letters, but also substituted additional symbols for each vowel.

Such secrecy played just as noticeable a role in Venice, with the earliest evidence for enciphered diplomatic correspondence in Venice dating to 1411. By the end of the century, the Italian states were in constant struggle over territory and competition over access to trade. The Venetians then decided to hire Soro, because they required more permanent officials to meet the growing demand for diplomacy as well as to counter their opponents’ use of cryptography.

At this time, around the outbreak of the Italian Wars, cryptography was no longer reserved solely for the elite. The mathematician Leon Alberti, for instance, wrote an instruction manual in 1467 titled De Cifris, which outlined the general principles for composing ciphers. The text was originally created for the Vatican but spread to individuals throughout the peninsula and was eventually printed publicly in Venice in 1568. In this work, for which later writers have dubbed Alberti the Father of Modern Cryptography, he explained how language can be symbolically and systematically represented by substituted letters. He also laid out the principles of frequency analysis with vowels and consonants, and, most famously, detailed a method called the Alberti disk that allowed the user to create a polyalphabetic cipher, or a complex encoding system.

Similarly, bankers and merchants copied government practices and encoded their correspondence. Tommaso Spinelli, a successful banker from Florence, used codes for instructions in his letters. In a letter to his brother dated October 13, 1442, Spinelli wrote about a certain Lorenzo di Niccolo in Bruges, who owed the bank a significant debt. Spinelli wrote, “I will initiate legal action against him through the papal court and will have him excommunicated.” He concluded the letter with secret instructions for his brother and a key to decipher them at the end.

The Venetian merchant Andrea Barbarigo also used codes in his private letters. Barbarigo was not a particularly wealthy merchant, but he employed agents who sourced and purchased spices, textiles, and other commodities he traded. He was not able to use government intelligence, and he relied on merchants to secure information about commodities and price changes. He would then send instructions on what and where to purchase to his agents in code to protect the information from other merchants, since he couldn’t access the government’s network “even though the need for such a code was unlikely,” according to his biographer and historian of Venetian merchants Frederic Lane.

Giovanni Soro, the “Father of the Venetian Cipher,” became an indispensable fixture of the Venetian administration. From 1505 to 1543, he was renowned for his talents at deciphering multilingual texts. Although our knowledge of Soro primarily comes from the diaries of the high-ranking Venetian official Marino Sanudo, he is recorded as having deciphered letters during the wars, including information on troop movements, as well as general dispatches of general intelligence. During this time, most of the codes employed special symbols for prominent individuals and location, and the most complex would replace vowels with several different letters. Regardless of the method, they contained valuable information that helped the Council make decisions regarding foreign policy and trade agreements.

Some evidence indicates that Soro also helped Venice create ciphers in addition to cracking the codes of their neighbors. According to the correspondence of the Venetian ambassador at Rome, Marco Minio, the ambassador had an official code. With the key, Minio could encipher his correspondence; and, when it arrived back in Venice, Soro would apply the same key to decipher it. Based on the monogram found on one of the letters, some historians claim that Soro had developed the new code that was being used by the ambassadors in 1519. Certainly, in 1529, Soro created a new code system that would work with ambassadors at Constantinople. The cipher key remains in the Venetian Archives and explained how the ambassadors at Constantinople were supposed to report on court intrigues and local affairs. The cipher was complex for the time and reversed the alphabet, depicted vowels in four different ways, and represented various monarchs and their states with unique symbols.

During the 1520s, as Venice entered the next Italian War, the War of the League of Cognac, Soro’s reputation spread beyond Venice. Pope Clement VII brought together an alliance of Venice, France, Florence, England, and Milan, against Charles V, the new Holy Roman Emperor, to expel the Hapsburgs from Italy. Because of Soro’s role in deciphering letters intercepted from Charles V’s ambassador in Rome, the French said he was “inspired by God.” When the Florentines intercepted private letters from Pope Clement VII to papal legates in France, the Pope sent copies of the letters to Venice to see if Soro could decipher them, claiming that “Soro can decode anything.” But apparently, Soro could not. Word came to the Vatican that the code had stumped him—a comment later authorities have suspected was only Soro trying to appease the Pope.

Soro was a wonder, but he was not immortal. Before he died in 1544, the Council of Ten commissioned him to train a new set of cryptographers, which established a bureau of professional cryptographers that would last for another hundred years. Trained in cryptographic skills, they passed entrance exams, studied frequency analysis and number theory, learned languages, and eventually had to decipher a document written in a complex cipher without a key. Upon completing their cryptanalysis apprenticeship, they would receive government salaries as much as 10 ducats a month, high pay considering other professions such as proofreaders received 4 to 6 ducats a month and master builders received just over 7.

The secretaries of secrets eventually melded into the rest of the Venetian administration in the 17th century, and the power of Venice declined throughout the 18th century until the city was defeated by Napoleon. Although other European states came to replace Venice’s role in the realm of secrets, Soro’s legacy as a cryptanalyst was summed up by his assistant and successor Alvise Borghi: Soro was “padre di questa rarissma virtu” or the “father of this rarest of virtues.”

Scientists are trying to keep one of the world’s last great wildernesses intact.
cryptographycodesroman

During WWII, Bletchley Park Was Home to Codebreaking and Tea Shenanigans

Staff at "Station X" threw their teacups into lakes and stuffed them into hedges.
music

With Musical Cryptography, Composers Can Hide Messages in Their Melodies

By mapping notes to letters, some musicians sneak secret words into tunes.
plague

A look inside the Mediterranean trading power, courtesy of its hard-working 16th-century porters.
floods

How Can a Basilica Stay Dry Amid Venice's Rising Waters?

The race is on to save St. Mark's—and its marble—from damaging, salty floodwaters.
Want to see fewer ads? Become a Member.
From Around the Web
THE GASTRO OBSCURA BOOK
Taste the World!
An eye-opening journey through the history, culture, and places of the culinary world. Order Now