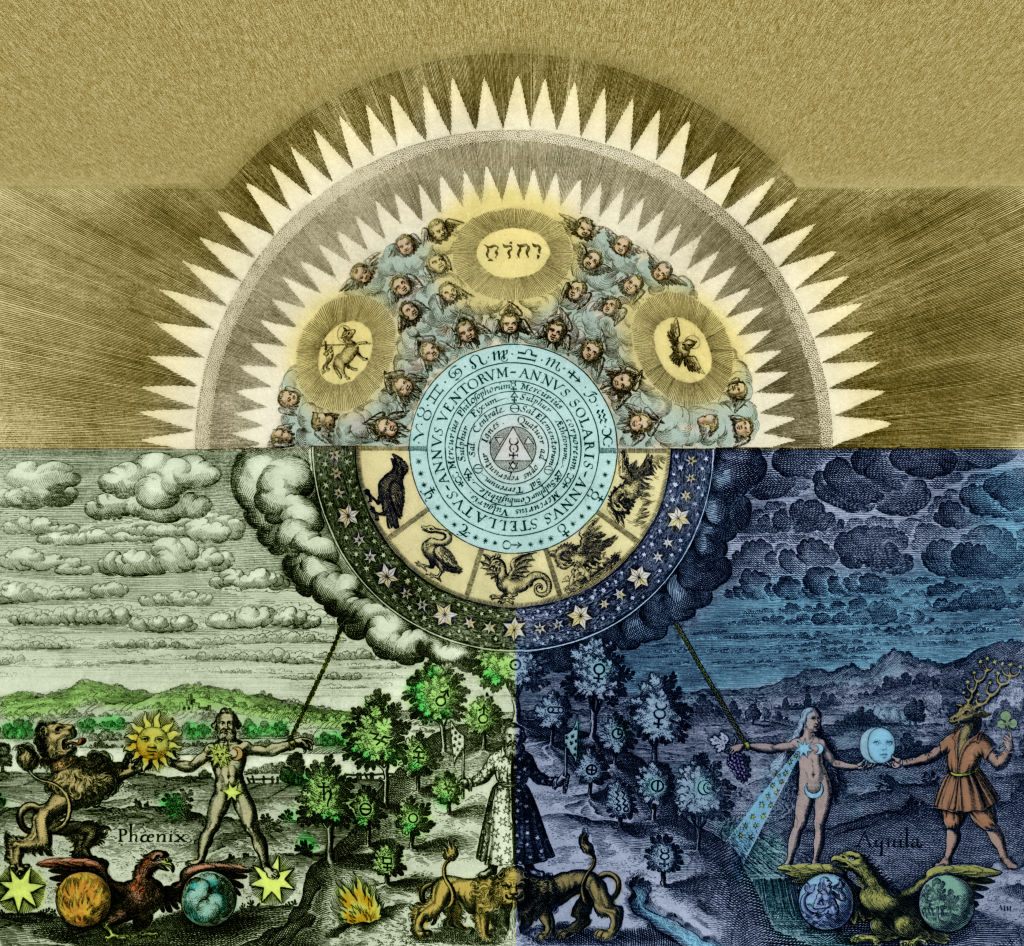 Alchemists were a puzzling bunch. Take, for instance, this 1618 engraving by Matthaeus Merian the Elder, which is full of alchemical secrets encoded in complex symbols. Fototeca Storica Nazionale/Getty Images

In ancient Sicily, a mathematician mystifies his friends with a colorful 14-piece dissection puzzle. In 14th-century China, a craftsperson carves intricate designs into an ivory globe hiding secrets. In 17th-century England, a young chaplain bets that he can solve an enemy cipher over dinner. Puzzles have always fascinated us. They’ve been used to encrypt top-secret military secrets and to frustrate us with our lack of knowledge around five-letter words. (Looking at you, Wordle.) To mark the launch of Atlas Obscura’s new AO Puzzles initiative, we went hunting through our archives to reveal some of our favorite stories about history’s greatest codes.

Has the recipe for eternal life been hiding in the pages of a mysterious notebook for centuries?

In the 17th century, alchemist Arthur Dee uncovered the secret recipe for eternal life, known to alchemists as the “Philosopher’s Stone.” There was only one problem; he wrote the recipe in a complex secret code and told no one about his findings. For centuries Dee’s notebook and the recipe hidden within it went overlooked. That is until three scholars joined forces to crack the code for Dee’s life-sustaining recipe. It remains to be seen if the recipe will actually impart immortality.

The Roman Puzzle Locks That Doubled as Fashionable Rings

Today we use Venmo; back then, Romans used encrypted rings.

You’re in ancient Rome and need to send a friend some cash. Lucky for you, you have a ring-like puzzle lock to make sure no pesky robber tries anything nefarious. You load up a coin purse with some gold and then fasten it closed with your circular ring lock. When the pouch arrives, your friend, let’s call her Aurelia, maneuvers the switches to reveal the tiny, hidden keyhole. Then she pops the ring lock open with her own key—a trick so ingenious that puzzle historian Jerry Slocum didn’t believe these locks existed the first time he heard of the the little-studied objects.

They were nicknamed the “devil’s work ball.” These hand-carved, ivory orbs nest within one another creating layer upon layer of ornately rendered garden scenes and exquisite geometric designs. Outsiders thought them to be too complicated for any human to craft. Surely, they were the devil’s work. After China’s 2017 ban on the domestic ivory trade the ancient artform disappeared, but the history of these puzzle balls remains as complex as the orbs themselves.

John Wallis is almost as much of a mystery as the codes he deciphered.

In 1643, a charismatic, young clergyman was enjoying a lavish London dinner party when he overheard a juicy bit of political gossip. An enemy letter had been captured in the battle of Chichester (England had been embroiled in a brutal civil war for months), but no one could crack the cipher. John Wallis, the young chaplain, boasted that he could reveal the contents of the letter on the spot. Centuries later, England’s Dominic Winter Auctioneers sold 53 letters Wallis deciphered during the war for roughly $37,000, but the letters do little to reveal the mysterious man and the methods behind the codebreaking.

It was said there was no code Giovanni Soro couldn’t break. In the early 1500s, the French were so enamored with Soro’s skill they said he was “inspired by God.” Even the pope entrusted his codebreaking needs to Soro. For much of his life, the Italian codebreaker worked for the Venetian government decoding intercepted diplomatic and military letters. So sought after was his skill that Venice charged Soro to train a new cabal of cryptographers, whose codebreaking skills would be used for another century by the Italian city state. This article uncovers the hidden world of Venice’s early codebreakers.

The author of Peter Rabbit was a shrewd art critic and keen observer of Victorian life–but she recorded her insights in code.

“I say fearlessly that the Michelangelo is hideous and badly drawn,” wrote author, fungi researcher, and watercolorist Beatrix Potter after a visit to London’s National Gallery. “No one will read this,” the teenage Potter wrote in her signature code in the last half of the 19th century. For 15 years, Potter encrypted her personal journals using a mono-alphabetic substitution cipher. But the journals sat largely neglected following the death of the esteemed children’s author. That is, until Potter enthusiast and collector Leslie Linder got his hands on them and, after a few false starts, was able to crack the code for Potter’s scribble-ridden, encoded notebooks.

Scoring an invitation is almost as difficult as solving the party’s many puzzles.

Every year, at a location disclosed only to invitees, there is a puzzle party. The annual gathering of puzzle aficionados began in 1978 as a way for collectors, craftspeople, and fans to all come together to try the latest mind-bending enigmas. Shrouded in secrecy, the annual gathering has been held in different locations across the U.S., Europe, and Japan. Press isn’t welcome at the party, and information about the soirée is only shared publicly after the fact. The multi-day weekend event is made up of banquets, lectures, tours, parties, and the “exchange” where attendees share their own puzzles with one another—but scoring a ticket is notoriously difficult.

Expressing your identity in a clever string of images was a thing long before emojis.
nazis

From a Nazi code machine found at the bottom of a bay to a vintage Babe Ruth card hidden in a piano.
ships

As queens or captains, women deftly operated ships across the Red Sea and Mediterranean 2,000 years ago.
hoboes

Everything You Thought You Knew About ‘Hobo Code’ Is Wrong

Rail riders past and present leave messages for each other, but not the ones you’ve probably heard about.
Video • Wonder From Home