When Groundhog Was on the Menu in Punxsutawney - Gastro Obscura
Want to see fewer ads? Become a Member. 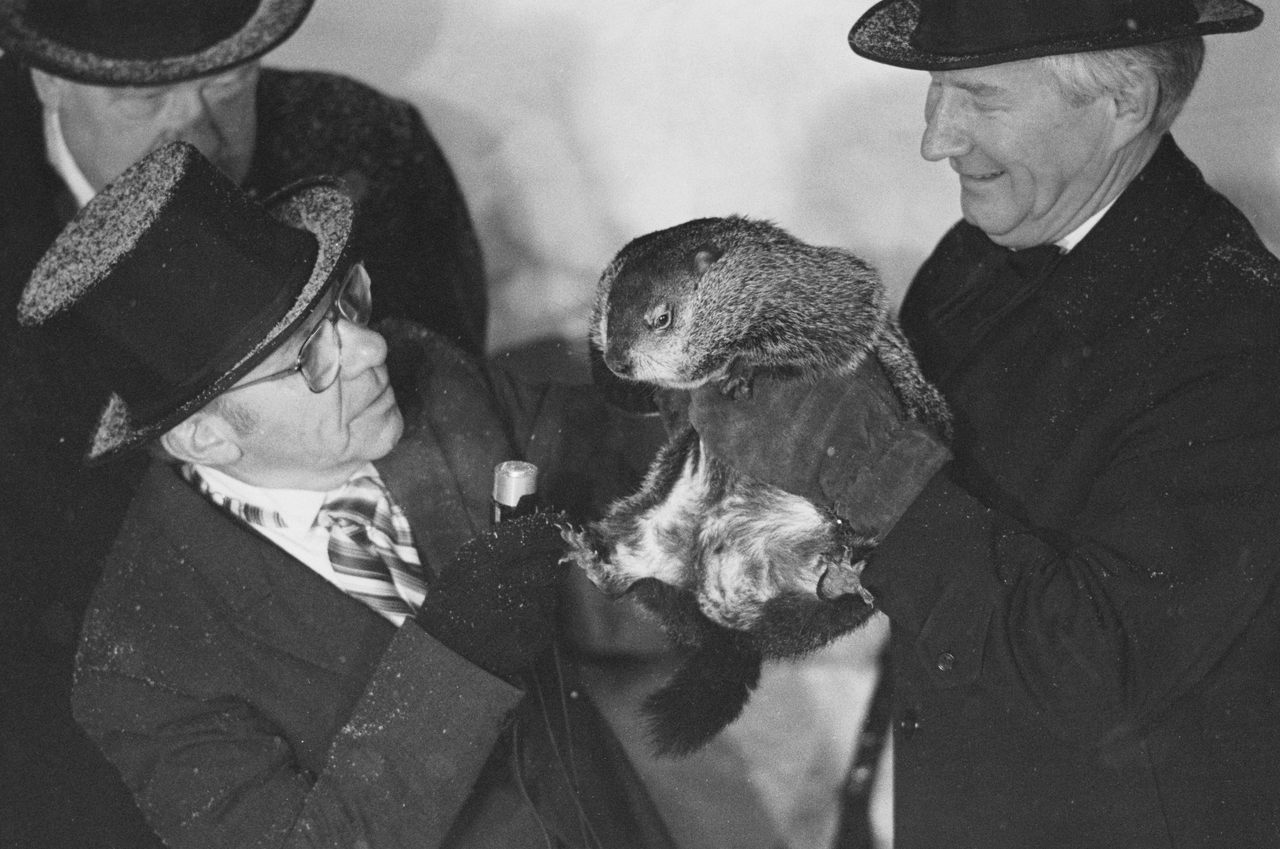 Every February 2 since 1887, a groundhog named Phil has made an appearance before a group of tuxedo- and top hat–wearing local gentlemen in Punxsutawney, Pennsylvania. In earlier decades, the reason the little rodent may have been tempted to dive back into the ground had nothing to do with six more weeks of winter—or Bill Murray having a midlife crisis—but rather with the very legitimate danger that some of the spectators might be planning to eat him.

“There was a time not too long ago when eating groundhog was fairly common throughout rural America,” writes William Woys Weaver in As American as Shoofly Pie: The Foodlore and Fakelore of Pennsylvania Dutch Cuisine. Groundhog dinners were once popular fundraisers among Pennsylvania Dutch communities in the 19th and early 20th centuries, with offerings ranging from roast groundhog with bread stuffing to buttermilk-brined groundhog braised with vinegar and wild ramps.

While part of this affinity was born from resourcefulness, Weaver goes on to insist that there was more to it than that. “Yet properly dressed, groundhog is indeed an underrated American delicacy, and smoked groundhog is an unsung luxury—I do not exaggerate,” he writes. Whether you call them groundhogs, woodchucks, or whistle pigs, the varmints have a mild flavor and texture that Weaver says many have likened to veal.

To anyone horrified by the idea of butchering Punxsutawney’s furry weatherman, it’s worth remembering that it’s no coincidence that the holiday of Groundhog Day originated in this Pennsylvania Dutch stronghold. Grundsau (or “Groundhog”) Lodges were popular gentlemen’s clubs that sprang up around the region in the 1930s. Given that these organizations were often hunting lodges and that Punxsutawney’s first branch sprang up in 1887, it’s not hard to imagine that at that first celebration, Phil—or one of his relatives—may well have been on the menu. In his book Groundhog Day, author Don Yoder cites a 2002 issue of the local magazine Hometown Punxsutawney in which the editor writes that in the past “the groundhog wasn’t the center of attention; he was the center of the meal.”

Since the dead of winter is hardly prime hunting season, members of Punxsutawney’s Groundhog Lodge may have consumed more “groundhog punch”—a questionable-sounding blend of vodka, orange juice, milk, and raw eggs—than actual groundhog. Yet there’s no doubt that locals enjoyed dining on woodchuck well into the last century, particularly during the annual Groundhog Picnic in the summer and early fall. “It is custom for members of the club to take an afternoon off with mattocks and spades and dig up and slaughter a sufficient number of woodchucks for a feast,” reported The Pittsburg Gazette of the town in September 1902. “The animals are cooked by an expert, and while roast woodchuck forms the basis of the feast a variety of other edibles are provided.”

“Groundhog, Punxsutawney Style” is certainly a key recipe in Cooking with the Groundhog, a cookbook published in 1958 to raise money for a hospital in Punxsutawney. Along with an assortment of community-sourced recipes, the book features helpful tips on brining, braising, and otherwise consuming this “clean-living, herb-eating, furry little animal” that makes for “good hunting and good eating.”

In a bizarre twist, the story behind the book feels worthy of its own groundhog-themed rom-com. Elaine Kahn Light, a plucky, young reporter for the Associated Press in Pittsburgh, journeyed to Punxsutawney for Groundhog Day, ended up falling hard for a member of the local Groundhog Lodge, and ditched the big city for small-town life. Light remained an active member of the community until the age of 99. She was particularly fond of the annual groundhog hunt and stag picnic each August, of which she wrote, “The menu hasn’t changed since 1886—barbecued groundhog, corn-on-the-cob and beer.”

Even Light recognizes that readers in other parts of the country might balk at the idea of eating roast woodchuck. “For the uninitiated and the squeamish, properly prepared groundhog tastes very much like rabbit,” she writes. “Some even compare it favorably with lamb and chicken. Prepared with wine and herbs, it becomes a dish for an epicure.”

A whole lot of game animals currently disdained by most American diners—including squirrel, raccoon, groundhog, beaver, possum, and muskrat—were once staples of the country’s cuisine. “We are very disconnected to the food system from the way it was a hundred years ago,” says cookbook author Alan Bergo, also known as the Forager Chef. Recipes for Brunswick stew and other dishes featuring these critters abound in cookbooks from the 1600s through early 1800s. “Small game used to be a major part of the American diet,” Bergo says.

According to Bergo, a former fine-dining chef who has become an advocate for responsible foraging and hunting, we could learn a thing or two from the ways our ancestors ate. Groundhogs are so abundant that most states impose few—if any—hunting restrictions on them. More importantly, relying on groundhogs as a food source instead of, say, pigs or cows, represents a conscientious departure from factory farming.

“You are eating outside of the giant meat-making machine here in the United States,” Bergo says. “It’s a very ethical thing to do, a very sustainable thing to do. You’re not supporting an animal that was raised in cages.”

Bergo catches several groundhogs each year on the farm he shares with his partner using humane Havahart traps. Up until their demise, the groundhogs spend their days nibbling on fruits and vegetables, and living as nature intended. “This was a woodchuck that lived a good woodchuck life,” he says. “They’re sitting [in the trap] eating apples—we put food in there for them. They don’t suffer and we dispatch them quickly.”

Groundhog may be sustainable, but Bergo wouldn’t serve it if he didn’t think the taste was up to scratch. Although game sometimes gets a reputation for being pungent or stringy, as long as woodchucks are correctly prepared, the lean, dark meat is an easy sell. “Groundhog is absolutely excellent,” Bergo says. “It’s like duck crossed with rabbit.”

There’s a straightforward reason for that. Omnivorous or carnivorous animals that feast on rotting meat, fish, or shellfish will tend to taste accordingly. “With the small game, just like any other animal, the taste is from the diet,” Bergo says. “So possum or something that is eating carrion or crayfish is going to have an incredibly strong taste.”

As Michael Twitty writes in The Cooking Gene, resourceful Black cooks in the American South historically would fatten up possums on persimmons. After a week or so on a carefully controlled vegetarian diet, the meat would take on a completely different flavor. Since groundhogs are born vegetarians, cooks can skip this step. “Groundhogs are eating organic produce out of the garden,” Bergo says.

Bergo hopes that in the future, diners will keep an open mind about small game meat—Punxsutawney Phil included. Choosing to eat meat is an inherently complicated issue, but opting out of the meat industrial complex where possible reduces both cruelty and environmental impact. And for those willing to set aside their preconceptions, there’s a real culinary payoff.

“I’ve served people [groundhog] and just told them that it’s small game,” Bergo says. “Everyone has said, ‘This is fantastic.’”

Adapted from a recipe by Alan Bergo on The Forager Chef.

This Depression-Era ‘Magic Cake’ Has a Secret Ingredient

From boozy fruit preserves to tomato soup cake, we're looking back at a year of culinary curiosity.
food

The infamous ‘Don’t Ask Cake’ is better than it sounds.
death

Step into a pastel time capsule where candy is truly dandy.
Lititz, Pennsylvania

Don't get it twisted: This is the oldest pretzel bakery in the United States.
East Greenville, Pennsylvania

This roadside stand packs 300-plus varieties of tomatoes, from "Maiden's Fire" to "Kaleidoscopic Jewel."
Pittsburgh, Pennsylvania

This restaurant offers a side of antiques, curios, and a bathroom chock full of owls.
Mount Joy, Pennsylvania

In the bowels of a 19th-century brewery lurks a fine-dining restaurant offering an array of themed feasts.
Want to see fewer ads? Become a Member.
From Around the Web
THE GASTRO OBSCURA BOOK
Taste the World!
An eye-opening journey through the history, culture, and places of the culinary world. Order Now