How to Turn a Volcano Into an Oven - Gastro Obscura
Want to see fewer ads? Become a Member. 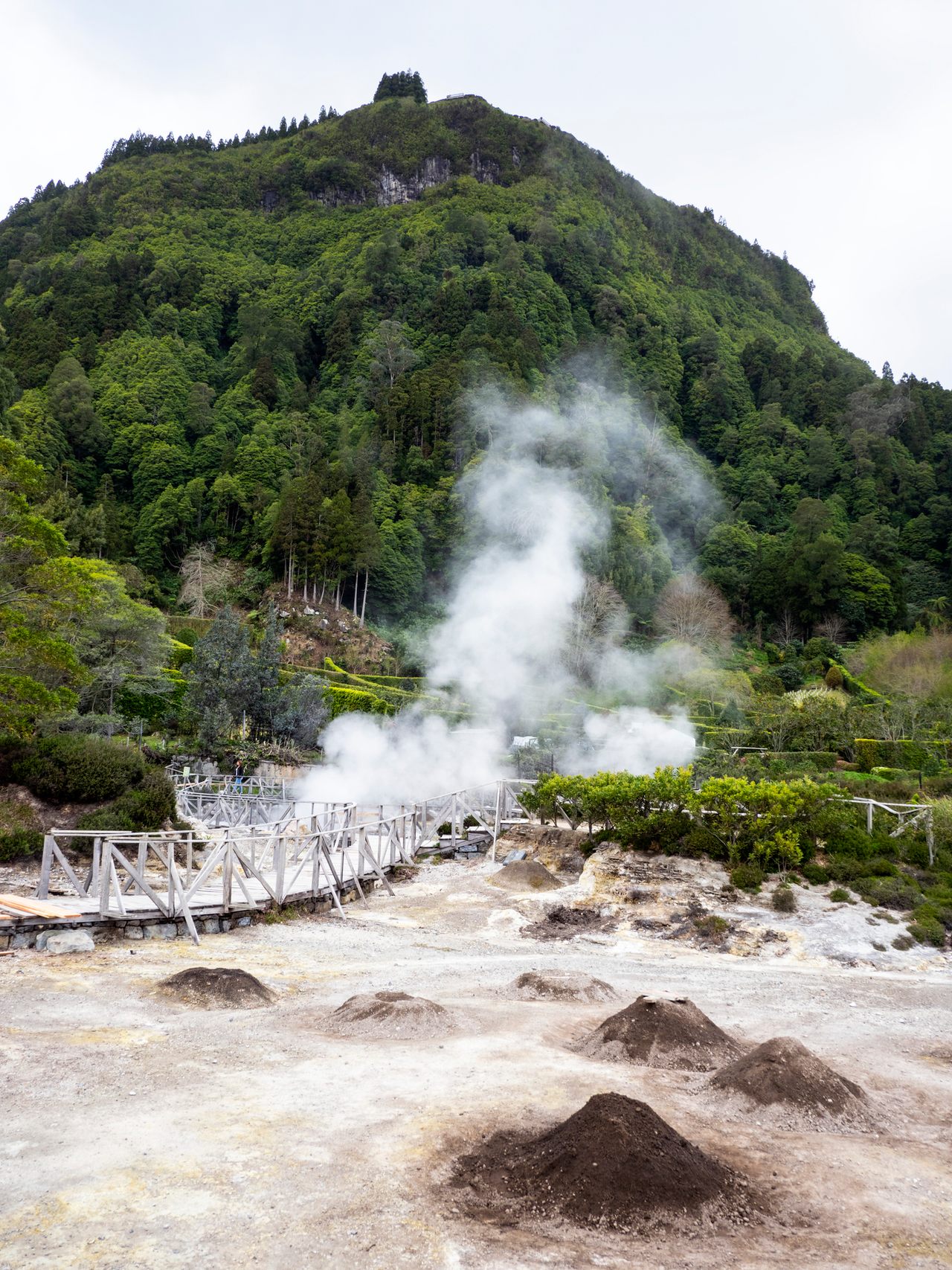 The mounds in the foreground mark the spots where stew has been buried at Lagoa das Furnas. Jose A. Bernat Bacete / Getty Images
In This Story
Place

For this chef, an active volcano is his oven.
Food

In this island town, stew gets cooked by volcano.

THIS ARTICLE IS ADAPTED FROM THE APRIL 24, 2022, EDITION OF GASTRO OBSCURA’S FAVORITE THINGS NEWSLETTER. YOU CAN SIGN UP HERE.

Earlier this month, I found myself driving through the winding hills of São Miguel, a small island in the Portuguese Azores. When I reached my destination, I was hit with the smell of sulfur and the warmth of steam. They were coming from fumaroles, holes in the ground that hissed with the same volcanic activity that once created this island.

That day, those bubbling natural cauldrons were cooking my lunch.

Amid the plumes of steam, a crowd was gathering around a man who had started to dig. When he finished, he and an assistant reached two long hooks into the hole and unearthed a large pot. The show was more suspenseful than I expected: The assistant stumbled, nearly spilling the pot’s contents and eliciting gasps from the audience.

Thankfully, he recovered, and another pot of cozido das furnas—a unique stew cooked in the geothermal heat of these hot springs—was on its way to the restaurant.

Cozido das furnas is a specialty of São Miguel, but this isn’t the only place where people use volcanic activity to cook. It’s possible that prehistoric people in Tanzania were even cooking with geothermal steam as early as 1.7 million years ago.

While technology has advanced since then, some chefs still prefer the gentle heat supplied by hot springs or the speed and showmanship of cooking directly over lava. This week, we’re looking at incredible places around the world that cook via volcano.

Twice a day, vans from local restaurants pull up to the hot springs that border Lagoa das Furnas, the island’s giant crater lake. They come for the stew that’s been simmering inside the area’s fumaroles.

The recipe for cozido das furnas is simple: It’s typically a hearty combination of beef, chicken, pork, sausage, potato, taro, cabbage, kale, and carrots that have been seasoned only with salt. But the time spent cooking in the gentle geothermal heat yields juicy, pull-apart meat and tender, ever-so-slightly salty vegetables.

In the 1970s, two architects set out to build the ultimate hell’s kitchen: a restaurant situated inside a volcano.

The result was the aptly-named El Diablo on Lanzarote Island. Today, chefs cook an array of meat options on a giant grill suspended above an opening in the volcano. Instead of charcoal, this grill runs on the lava that burns below.

Guests can enjoy the lava-cooked food without fear of being cooked themselves. The surrounding volcano has been dormant since 1824.

The city of Potosí sits in the shadow of Cerro Rico, or the “Rich Mountain.” Its name is a nod to its silver deposits, but long before the mountain became the cash cow of the Spanish Empire, it was an active volcano.

One of the last remnants of the mountain’s fiery past are its volcanic rocks. Today, Potosí’s restaurants use these nuggets to cook k’alapurka, a corn flour-based soup that comes with potatoes and fried pork or jerky.

On its own, k’alapurka sounds like a perfectly hearty, yet standard meal. It’s only when the server drops the heated rock inside that the golden broth becomes its own mini hot spring, bubbling and spurting as it cooks.

Even when the sizzling dies down, this soup still packs heat: It comes garnished with a ring of ground chili pepper, oregano, and ají sauce.

Hikers must first climb a volcano to earn their meal at Pizza Pacaya.

Once they reach the top, they’ll be greeted by Mario David García Mansilla, a chef who has already made the trek himself—with 60 pounds of equipment and ingredients on his back.

Even though the ascent takes about 90 minutes, Mansilla only needs 14 to cook each pizza. That’s because he cooks his pies atop hardened lava. Reaching up to 1,800 degrees Fahrenheit, the sizzling surface puts any standard brick-oven to shame.

Every morning, Siggi Rafn Hilmarsson buries a pot of dough along the black, steaming shores of Lake Laugarvatn. While the lake’s hot springs are famous for hosting bathers, they also offer ideal conditions for gently steaming bread to moist, chewy perfection.

After slow-cooking for several hours, the dough transforms into hverabrauð, a dense, cakey rye that literally translates to “hot springs bread.” Sliced and slathered with butter, the brown rye is often served with smoked trout from the lake.

The Japanese City Where Food Is Steamed in Hell

Chefs have been cooking with Beppu's hot-spring “hells” for centuries.
hot springs

The Icelandic Bakery That Buries Its Bread in Hot Springs