At Pizza Pacaya, the Oven Is an Active Volcano - Gastro Obscura
Want to see fewer ads? Become a Member. 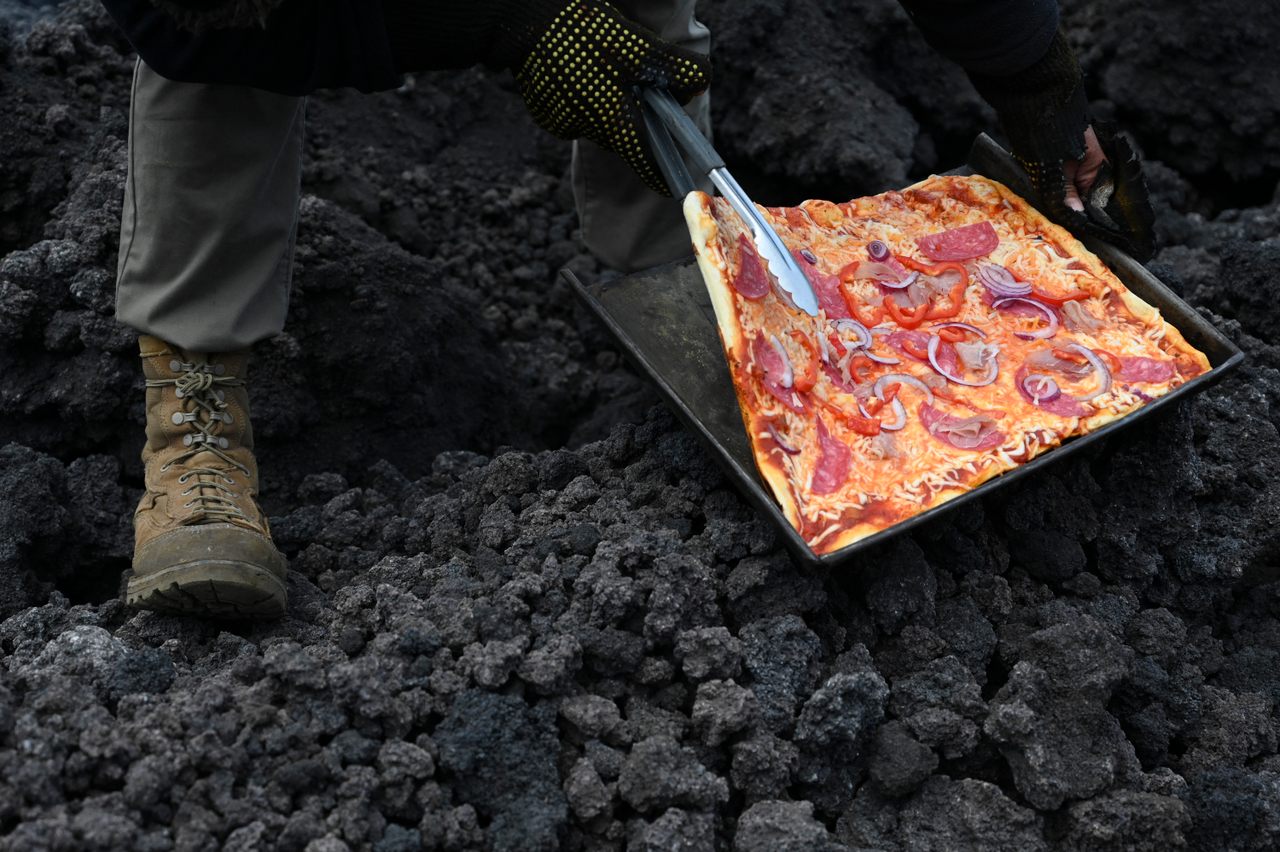 David García checks a pizza he is cooking on a Pacaya lava river in May, 2021. OHAN ORDONEZ/AFP via Getty Images
In This Story
Place

For this chef, an active volcano is his oven.
Destination Guide

The earthquake had already woken up Mario David García Mansilla, a Guatemalan cook, when he saw the “balls of fire” flying over his house. It was the night of May 27, 2010, and the Pacaya Volcano was having its biggest explosion in recent years. When García saw the burning rocks flying, he did what any reasonable person would do: look for the keys of his car, a ‘72 Volkswagen Beetle. With the volcano’s roars flooding the landscape, he talked to a couple of friends and decided to pick them up. Then, he did what any unreasonable person would do: He drove directly towards the volcano.

As they approached the erupting mountain, the sky lit up in a fiery red. He stopped the car less than a mile (1 km) away from the volcano, he says. “The first thing you feel, it’s the intense heat, like going into a sauna,” García recalls. “And the noise is like a seven-engine plane: deafening.” He wasn’t scared. Right there, he says, is when he decided that he would never move away from the 16,000-person town of San Vicente Pacaya, one of the 21 small villages that sit on the slopes of one of the most active volcanoes in Guatemala.

Ten years later, he has not only stayed, but he has fused his life with the volcano. The 34-year-old accountant and chef has become the first to bake pizzas on the smoking lava of Pacaya. His unconventional restaurant, Pizza Pacaya, employs two other people, and it’s located on any corner of the Pacaya hot enough to bake pizzas.

Located in southern Guatemala, about 15 miles (24 km) south of the country’s capital, the Pacaya is, generally speaking, a “friendly” volcano. It’s been active since 1961, and most of its eruptions resemble the kind of slow-paced (but still potentially dangerous) lava flows seen in places such as Iceland or Hawaii. This has made the 8,200-foot volcano a popular tourist destination, with up to 300 people visiting every day, according to Guatemalan authorities.

After the 2010 emergency, García climbed the volcano’s hillside to see “what was up there” on numerous occasions. In one of his visits, he saw guides giving tourists marshmallows to roast. “That’s when something clicked in my head,” García says. He realized he could cook up there, merging his newfound love of volcanoes with the culinary passion he had pursued since adolescence, against the social norms that considered cooking “women’s work.”

His first hunch was to roast steaks or braise chicken. But he soon realized that he would need to climb the volcano with too many side dishes on his back. As he scouted the landscape, he saw huge caves of drying lava populating the landscape. That’s when it hit him: What if he used the caves as pizza ovens?

These kinds of caves form when volcanoes erupt thick and viscous lava, explains igneous petrologist and volcanologist Hannah Shamloo. “Think of a chunky peanut butter versus water,” she says. As the chunky-peanut-butter-like lava flows out of the volcano, it topples itself, forming structures. Whenever gases try to escape it, they form bubbles on the surface that sometimes don’t burst. As the lava keeps flowing, the never-busted bubble solidifies: A cave is formed. Underneath the insulated lava crust, the lava stays at about 1,472 degrees Fahrenheit (800°C).

The first pizza García cooked came out completely black. A few days later, he went back and made three pizzas with the core ingredients he still uses: tomato sauce, abundant cheese, and pieces of meat. After 10 minutes, one came out completely burnt, but the other two came out nicely: golden crust, melty cheese. When he ate those, “I thought, ‘Wow! This is gold what I have in my hands!’” he says.

However, it was only in 2019 that he formally started a business at the top of the Pacaya Volcano. Since then, García has visited the volcano almost daily. Wearing protective gear, military-style boots, and a backpack containing some 60 pounds of equipment and ingredients, he bakes pizza, usually for customers who made reservations. When lava started flowing from a newly formed fissure in late April, he started cooking directly over the still-melted rocks. “When I do it this way, when I go back home at the end of the day, I have to put my feet in salted water,” he says. “The heat is too high.”

García is by no means the first person to cook stuff over volcanic lava. Making anything from espressos to frying eggs is almost “a rite of passage amongst volcanologists,” says Shamloo, who works at Oregon State University. García is, however, among the first to translate this hobby into a profitable business.

“There comes a day for every cook when you want to feel fulfilled with yourself,” García says. “You really want the diner to say, ‘Wow, that’s impressive.’” With Pizza Pacaya, he says, he feels like he’s reached that summit.

What in the World Is Sea Snot?

From blog to bistro, Prashanta Khanal’s focus is forgotten and overlooked foods.
prisons

Kurt Evans is reducing recidivism, one pizza at a time.
Video

For this chef, an active volcano is his oven.
Antigua, Guatemala

This restored colonial house was once home to the botanist responsible for bringing avocados to the U.S.
Antigua, Guatemala

Believe it or not, the now-ubiquitous California avocado originated in Guatemala.
Condom, France