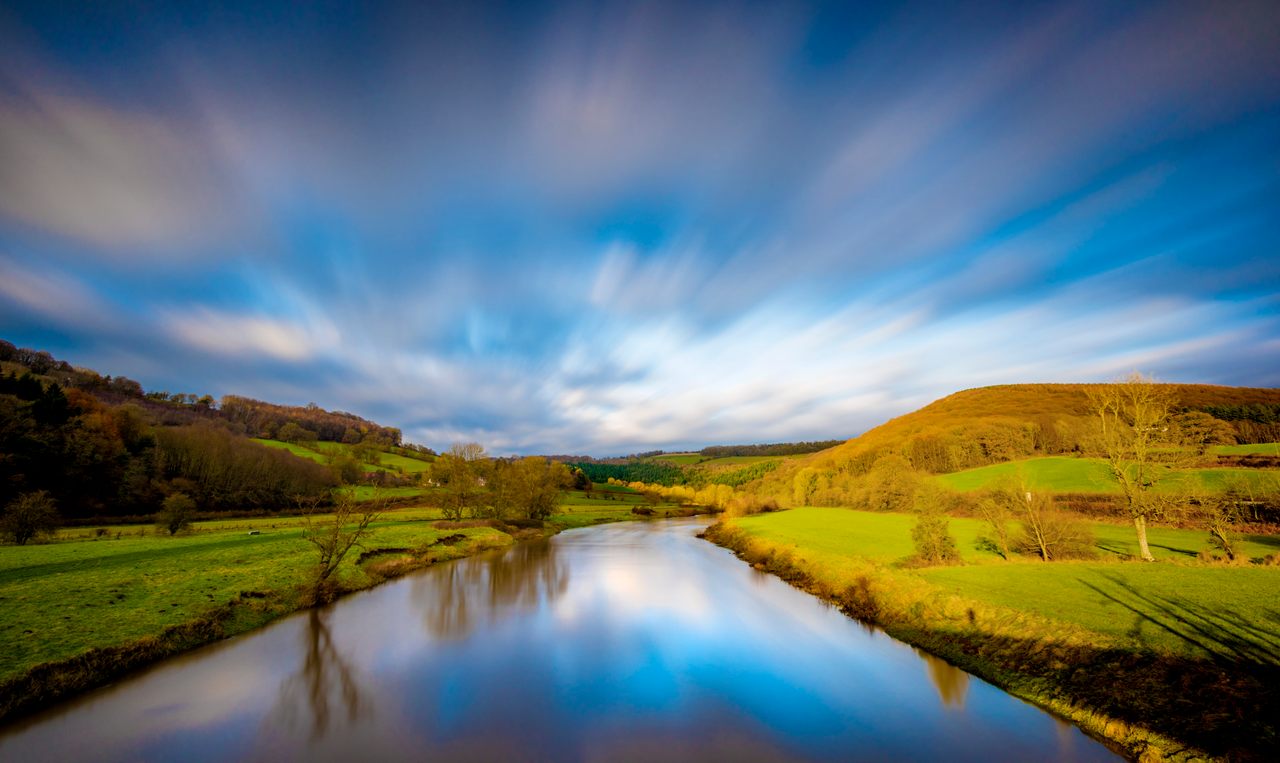 The ancient border between England and Wales was partly natural, thanks to rivers such as the Ceiriog and the Wye, shown here, and partly engineered with a system of earthworks and hillforts known today as Offa's Dyke. Michael Roberts/Getty Images
In This Story
Place

Britain’s longest ancient monument, this great 8th century earthwork was built to mark the boundary between what would become England and Wales.
Destination Guide

On a gray March day, Tracey Jones sits in her shuttered pub, contemplating the last six months and the invisible barrier just outside the door. The pub Jones took over in October, The Bridge Inn, is named for the nearby crossing over the Ceiriog River, which, along this stretch, marks the border between England and Wales. Jones’s establishment is in England, but the Welsh town of Chirk is just across the river. For years, the international border just a stone’s throw from the pub didn’t matter. “The majority of our regular drinkers are from Chirk,” says Jones. “Even though the pub is situated on the English side of the border, it’s really considered to be a predominantly Welsh pub.” COVID-19 changed all of that.

Thanks to erratic and uncoordinated lockdowns—some ordered by London, others by the Welsh government in Cardiff—The Bridge Inn has been closed more than it’s been open since Jones started running it. She says she’s been able to serve customers for a grand total of seven weeks since autumn. The situation is especially ironic for Jones: “I was born and bred over the bridge in Chirk.”

The course of the English-Welsh border in front of The Bridge Inn has changed little since it was first defined by an Anglo-Saxon king in the eighth century. Determined to stop Britons in the west from reclaiming their lost lands in the east, King Offa of Mercia constructed a line of defensive ditches and hillforts, augmented by natural barriers such as rivers. Known as Offa’s Dyke, over centuries the boundary evolved into little more than an administrative line on the map. People came and went as they pleased, until the pandemic resurrected the ancient border.

As one of the countries within the United Kingdom, Wales has limited powers to write its own laws. In early 2020, as the spread of COVID-19 triggered regional travel bans and lockdowns, Welsh restrictions diverged from those in neighboring England. Police could fine British citizens suspected of crossing the border for non-essential reasons. In May, when England opened up for the summer, Wales stayed in lockdown. And so it went for much of the year, one country opening just as the other shut down.

Jones says that when she began managing The Bridge Inn in October, “We were sure there wouldn’t be any further national lockdowns when we took over. How very wrong we were.” In November, England stayed open while Wales went into lockdown. Wales later emerged only for England to lock down.

The Bridge Inn’s Welsh regulars had to find Welsh pubs to drink in when England was locked down but Wales was open. Welsh drinkers were welcome at the Stanton House Inn in Chirk, where landlord Mark Jones (no relation) has been pouring pints for the last 20 years. If Stanton House’s Jones served an English customer, however, he could be fined almost $14,000. “We’re about half a mile from the English border,” he says. “When England was in lockdown we were asked to turn strangers away if they had no identification, because they could have been crossing the border.”

For the longtime publican, the rules made sense when both countries were in lockdown, but simply didn’t work when there was no coordination between the two countries. Says Stanton House’s Jones: “When England was open and we were closed, people just went from Wales to England. Our customers all crossed the border to (The Bridge Inn). I can’t blame them, having a pint after work is part of our working man’s life!”

The situation was even more absurd a few miles along Offa’s Dyke to the south. Here, the border cuts straight down the main street of the village of Llanymynech. Stand on the eastern sidewalk and you’re in England; cross the road, and you’re in Wales. John Turner’s pub, The Dolphin Inn, is on the Welsh side of the street facing two rival pubs in England, just yards away. As in Chirk, there was an official expectation that Turner would restrict access to his Welsh pub when England was in lockdown. “Even though we know most of our customers, we wouldn’t have known which side of the border they lived on,” says Turner. “This made it impossible to police.”

In Llanymynech, the hardened border has affected more than the pub-goers. The town boasts an “international” golf course: Offa’s Dyke runs through the greens and fairways, leaving 15 holes in Wales and 3 holes in England. Secretary Sian Whiteoak says the club itself is affiliated with England’s golf union, but pays taxes in Wales. In early January, golf was legal in England but outlawed in Wales. English golfers teeing off at the club discovered that Offa’s Dyke was no longer just ancient history when the Welsh authorities—escorted by police—arrived to close down the course.

The golfers left without incident, but British citizens being turned back, fined, or potentially arrested for crossing British borders is unprecedented. And it’s not just happening along Offa’s Dyke. The English-Scottish border, for example, first defined by the Treaty of York in 1237, has also been closed for non-essential crossings for much of the pandemic. There, the hardened border, on the heels of the U.K.’s departure from the European Union, coincides with revived calls for a referendum on Scottish independence.

For communities on the Welsh-English border, the issue is not independence but a lack of coordination between the two countries’ pandemic policies. King Offa probably could not have imagined that a microscopic virus would prove more effective at dividing the countryside than all his hillforts and elaborate earthworks. Like many other small business owners affected by the resurrected ancient barrier, the pub landlords are making the best of the fluid situation.

At The Bridge Inn, Jones is preparing a beer garden to serve patrons from both sides of the Ceiriog. “We plan to reopen on April 12th if given the go-ahead, as we’re fortunate enough to have some outside space,” she says.

In Llanymynech, Turner wants to get back to pulling pints and serving customers, too, regardless of their nationality, just as the establishment has done since the 19th century—and possibly much longer. The year 1517 is inscribed on a beam above the back door, hinting that part of the building may predate the 16th century laws that officially annexed Wales to England. Llanymynech endured that, and will endure the pandemic, too. “We have a good business, with a fabulous customer base,” says Turner. “There are going to be further disruptions once lockdown is over, but we’re confident we will survive.”

Feast on These Recipes From America's National Parks

A contemporary debate would feel familiar to Europeans alive when the Bubonic plague arrived.
music

In this town located 15 minutes outside of Fredericksburg, musical performances are hosted 363 days a year. Grab a beer and kick back under 300-year-old oak trees that have heard some of the best country musicians of all time.
Sponsored by Fredericksburg Convention and Visitor Bureau
bars

It's now a monument to a forgotten campaign against alcohol.
Video • Wonder From Home