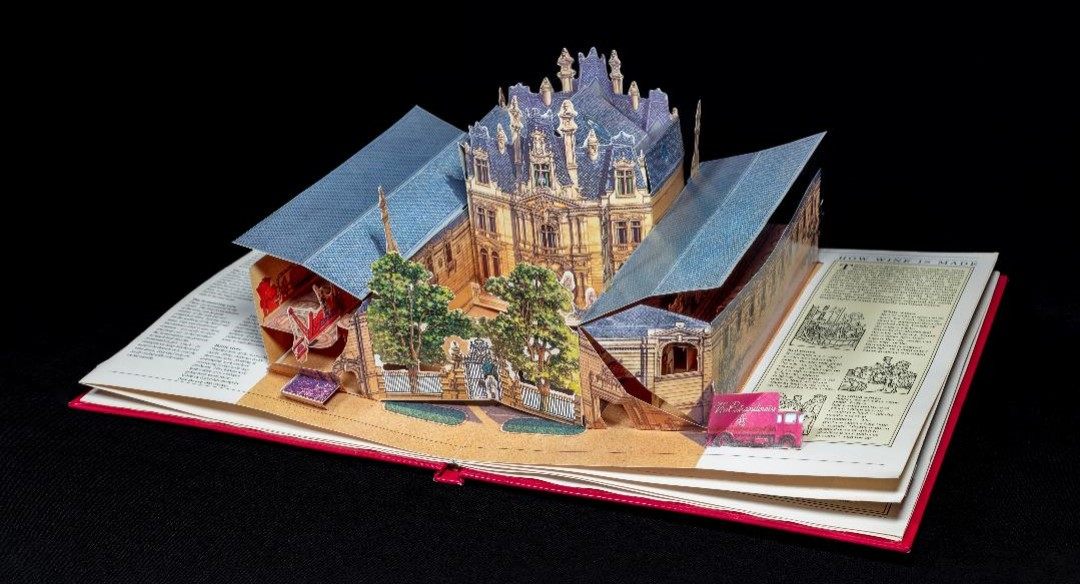 Hugh Johnson’s Pop-Up Wine Book is both informative and artful. All images courtesy of UC Davis Library Archives and Special Collections
In This Story
Destination Guide

In the 1770s, Spanish colonizers first started growing grapes in what they called “New Spain.” Since then, California has become one of the leading winemaking regions of the world. The state has served as a crossroads of viniculture traditions from different countries. For example, the famous Zinfandel grape probably originated in Croatia, became widespread in southern Italy, and eventually made its way to California in the 1820s via Austria.

The diverse history of California viniculture is reflected at The University of California, Davis, which owns what it calls “the world’s greatest wine library.”

That’s when the wine library was created, says Dr. Audrey Russek, Food and Wine archivist at UC Davis. “The collection was started to support research on winemaking and viticulture,” she explains. Today, it contains some 35,000 books in 50 languages, as well as wine labels, press clippings, and the personal correspondence from some of the world’s most important vintners.

The oldest item in the collection is a 12th-century manuscript, probably written by the monks at Abbey de Cercamp in northern France. The book which once belonged to the wine merchant and gourmet André Simon, lists out the health properties of wine. Most of the text was transcribed from an even earlier source, Saint Isidore of Seville’s Etymologiae, a 7th-century encyclopedia.

The library also owns Le débat du vin et de leaue, a 16th-century copy of a poem written as a debate between wine and water over their respective virtues, in the style of classical epic poetry. An earlier version of the poem was the first text on wine ever written in French.

Flicking through the library’s digitized collection feels like stepping into a time machine. It’s a colorful kaleidoscope of ephemera: labels from the 1920s, menus from the 1950s, and wine lists from the 1970s. Some of the books are more works of art than informative tomes, such as a miniature accordion book containing a quote from Homer’s Odyssey, hidden inside of a cork.

Each side of the cork can be pulled apart, revealing the words: “The wine urges me on / the bewitching wine / which sets even a wise man to singing / and to laughing gently / and brings forth words / which were better unspoken.”

Some of the collection’s most unusual items, however, cannot be digitized or checked out. “Some of my favorite items are the ones that give us a unique perspective on a period or an aspect of winemaking,” Russek says. For example, the library’s Archives and Special Collections contains a pair of worn-out boots that once belonged to pioneering plant geneticist and winemaker Harold P. Olmo.

Over his 46-year career, Olmo developed more than 30 new grape varieties, including Rubired, Ruby Cabernet, Carnelian, and Royalty. He also started the state’s first quarantine facility at UC Davis, allowing California winemakers to import vines from abroad while preventing the spread of pests and disease.

The boots once hung on a tribute wall to Olmo at a wine bar in Davis, California.When the wine bar closed in 2019, a viticulture professor at UC Davis snatched them up and added them to the library. “You can really see that they have been used in the field,” Russek says. “It gives you a material connection to this subject that books on winemaking don’t provide.”

These sort of personal relationships are central to the operation of the archive. “Keeping relationships with antiquarian booksellers, winemakers, [and] wine writers is essential to our work,” Russak explains, adding that sometimes the library sources items on its own, while sometimes people contact them to donate books, personal papers, or artwork related to wine.

“One of the things I love about our collection is that, while it certainly has a social, economic, and political significance, it is also very personal,” Russek adds. The best part of her work, she says, uncovering personal stories behind library items.

The collection can inspire high passion. For example, the library holds a 1608 text by Italian Renaissance scholar and polymath Giovanni Battista Della Porta, titled De distillatione. One graduate student was so impressed by Della Porta’s illustrations of 17th-century distillation equipment and mythical creatures that she got one as a tattoo.

Della Porta’s work is not the only one with stunning illustrations. Before photographs became the standard way to catalog grape types, researchers would task artists to create illustrations of fruit throughout different maturation stages. “The vibrancy and color of these are absolutely beautiful,” Russek says, referencing a Zinfandel illustration from a 1877 technical volume titled Grapes and Grape Vines of California, intended for winemakers new to the region.

The main focus of the collection is still the one originally set down by the state in the 1880s: helping researchers, faculty and students to research anything related to wine, from fermentation techniques to food pairings. But, Russek notes, UC Davis is a public university and the collection is open to the wider public as well. Food writers, winemakers, and wine lovers often ask staff to help them find sources they need for their research. “I like to think of our archives and special collections like your grandmother’s china,” Russek says, “It’s not meant to stay on a shelf. It’s meant to be used.”

The Mountain Mixologist of the Slovenian Alps

Rocky artifacts may offer insight into an Etruscan industry.
art

A series of gift guides for the curiosity-seekers in your life.
food

It's time to change our 10,000-year relationship with cattle.
libraries

They're saving food history for the future.
Video • PinDrop