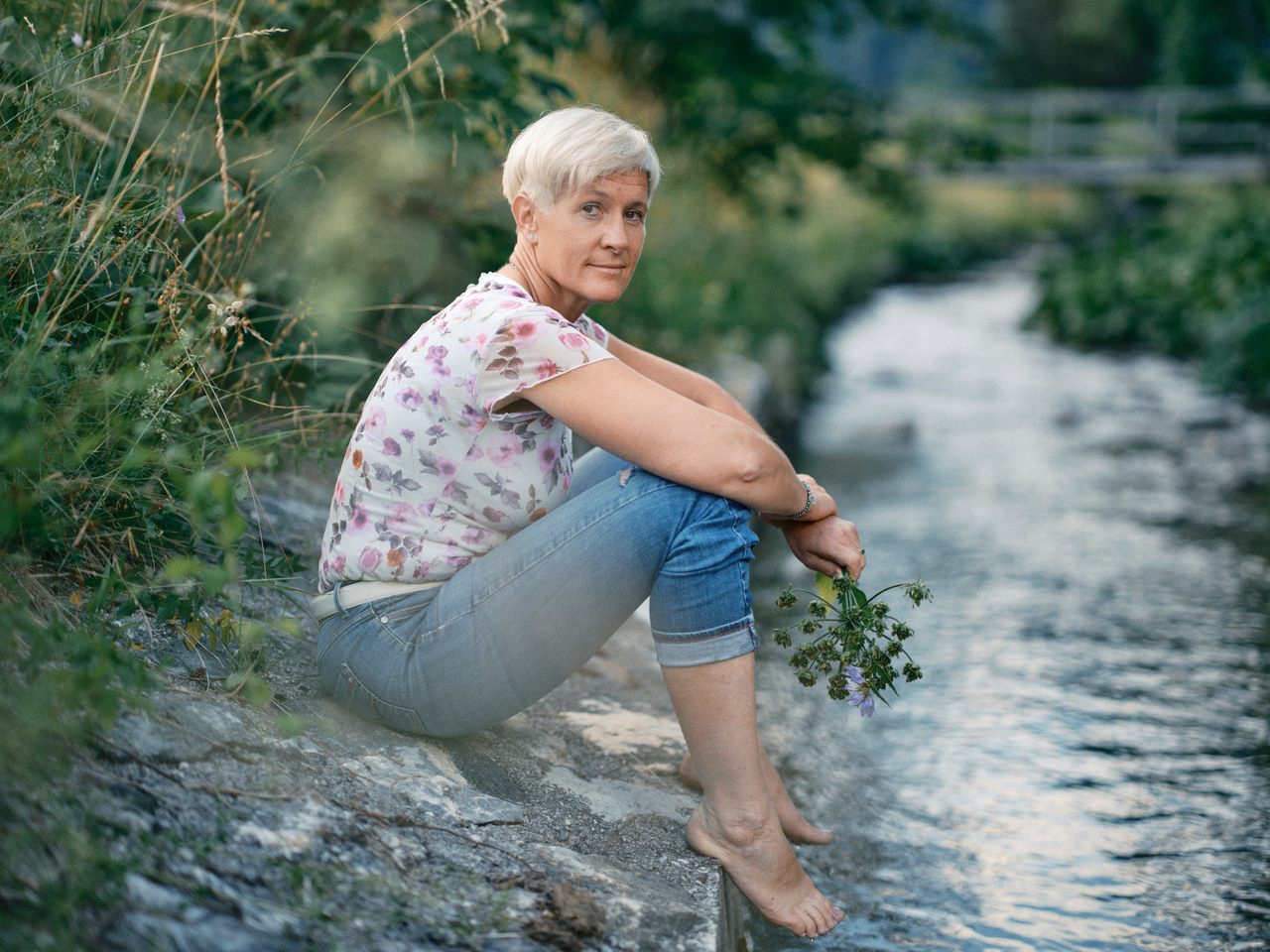 Rebolj, with some foraged finds. "Flowers will call me when they want to be picked," she says. Primož Korošec
In This Story
Destination Guide

The “blonde witch,” as locals affectionately call her, cannot walk more than a few paces in the alpine meadows around her home without gathering ingredients. What most of us pass over as merely lovely to look at—tall grass dusted with bursts of color from gentian, plantago, and lady’s mantle petals—Tanja Rebolj sees as key components of medicinal, and delicious, liquors of her own invention. Slovenians call her 22 varieties of liquor “schnapps.” But it’s not schnapps as the rest of us know it.

Stop in any gostilna, the Slovene word for a country restaurant (or anyone’s home, for that matter), and you’ll be offered šnopec (schnapps), a hard alcohol distilled from fermented fruit (usually apples) and then flavored with a single ingredient: Williams pear or walnut, lemon or honey, blueberry or young spruce tips. My mother-in-law, for example, likes to add sugar and fresh lemon juice to make limonica, a cousin of the Italian limoncello. Homemade, single-flavored schnapps is so ubiquitous in Slovenia that just about everyone has a relative who makes it. It’s considered not just a welcome drink, but a cure-all for everything from a hangover to tummy troubles to over-tight leather shoes. (Rub them with schnapps!)

But Cvet Gora—a former post office that Rebolj has turned into her home, a bed-and-breakfast, and an eco-shop featuring her homemade drinks made from foraged ingredients—does schnapps differently.

Cvet Gora is in Jezersko, a town tucked high in a mountain pass in the Kamnik-Savinja Alps range. It was the first official “mountain village” in Slovenia, joining a network of settlements throughout the Alps that are hubs for sustainable, environmentally-friendly mountaineering and hiking. Snuggled up to the border with Austria, which is a short stroll away, Jezersko began as a stopover point for furlani, the 19th-century equivalent of truck drivers, who carried cargo on horse-drawn carriages. Today, it’s a popular destination for hikers, mushroom hunters, and bicyclists, who pop down from, or up to, Austria as part of an alpine loop that takes in majestic views.

As a child, Rebolj often visited Jezersko for mountain walks (a common Slovenian pastime), and she wound up marrying someone born and raised there. A decade ago, Rebolj was moving through the ranks of the Slovenian army as a logistics specialist but felt she was not being treated equally to her male counterparts. So she left.

Unsure what to do post-military, Rebolj drifted, in need of a new outlet. “My mother-in-law knew about 20 plants that grow around here in Jezersko,” she explains, “and she used to make a tea from them. When she passed away, the locals were still asking after it. So I began to make the tea from her recipe.” Wanting to also establish her own tradition, Rebolj turned to schnapps.

Rebolj’s interest in wild plants grew and she read voraciously on herbology, medicine, and botany. Over the past 20 years, she earned the “blonde witch” title not only from brewing “magic potions,” but from a magic trick that she cannot really explain, but which happens regularly enough that she’s starting to believe she might have some special power. “Flowers will call me when they want to be picked. It’s maybe funny, maybe strange, but there were situations when I was driving to Jezersko and thought to myself, ‘Okay, I need this plant.’ And the plant would call me. There were places where I had a feeling that I must stop. And I stopped and I found the plant.”

The saying goes that you shouldn’t get high on your own stash, and though Rebolj tastes her schnapps to get the preparation right, she doesn’t drink it. Having spent years developing 22-and-counting varieties, each based on a traditional home remedy and involving far more ingredients than the typical schnapps, she has a lot to taste for. She’s more mixologist than moonshine maker.

Rebolj’s schnapps varieties are rooted in both history and science. She reads academic studies about the plants she gathers and bases her recipes on naturopathy and herbology as taught by contemporary specialists. Each bottle’s label includes Early Modern engravings of a key flora ingredient, as well as an image from the 17th-century encyclopedia Glory of the Duchy of Carniola by Baron Janez Vajkard Valvasor, a polymath who penned and printed an enormous compendium of knowledge, legends, and folk traditions in Carniola, part of what is now Slovenia. That book references witchcraft, magic, and home remedies, linking her contemporary potion-brewing to traditions dating back centuries.

Rebolj began to serve her schnapps to customers in 2013. When I host tours, I like to bring guests to Cvet Gora to do a tasting of all of her creations, with Rebolj narrating as we sip (including on an Atlas Obscura tour that I lead called “Forest to Table in Alpine Slovenia”). It’s like listening to the director’s commentary as a DVD extra. Her Antiživček (Anti-Nervousness) schnapps includes herbs such as chamomile, echinacea, and valerian, which are said to be calming and promote sleep. Rebolj developed Hribovska Kri (Hill Blood) when men complained that she made schnapps meant to be beneficial for what she calls “lady problems” (menstrual pain, menopause symptoms), but not for men. So she countered with a schnapps that she jokes is for “man problems,” that, as she says, “is like natural Viagra, but I can’t call it that, because they’ll sue me.”

There is also Zimska Pravljica (Winter Fairy Tale), a liquor that somehow tastes precisely as I imagine liquifying apple strudel would. “I bake apples, then I put in rum and cooked wine, then spices for Christmas, like cinnamon, anise, nutmeg, and clove. These spices are also supposed to be good for the stomach and serve as a digestive aid. But people really like them because they taste like strudel.” Others in the lineup include (roughly translated) Alpine Wound Healer, Memory Eraser, Jezersko Doctor, and Jaga Baba.

The “herbal queen” of her lineup, as she describes it, is Jezerska Pehta (Pehta from Jezersko, based on a fictional witch-like character in a beloved Yugoslav film about a shepherd boy named Kekec, who is something of a Slovenian Huckleberry Finn). It consists of 102 ingredients, each one foraged by Rebolj and meshed into a recipe that took eight years to develop. “Most years I don’t make it, because I only make it if I have all the ingredients,” she says. Jezerska Pehta is a tongue-dance of flavors, vaguely recalling Jägermeister. Focus and you feel like you can intuit any of its many ingredients.

Rebolj gathers all the ingredients for her liquors herself, and almost all come from within one kilometer of her home. Slovenia’s most famous chef, Ana Roš of the restaurant Hiša Franko (she was 2017 World Female Chef of the Year and appeared on Netflix’s Chef’s Table), promotes a “zero kilometer” policy: She wants all her ingredients to come from less than one kilometer from her restaurant. Rebolj isn’t dogmatic about it, but she aims for the same.

Rebolj has taken a national tradition—homemade schnapps—and at once expanded and contracted it, both in positive ways. She’s stretched the concept of what schnapps can be, transforming it from a simple alcohol featuring a single flavoring ingredient into a series of complex and subtle recipes. But she has also focused it, making the national tradition hyper-local, using ingredients found in her backyard.

At the moment, the only way to taste her schnapps is to travel to Jezersko. And by the way, Rebolj welcomes apprentices. I’ve already chosen my room—the one closest to the cupboard full of Zimska Pravljica.

What Do We Really Know About the History of the Printing Press?

Farmers and foragers set up at sunset to sell hundreds of species valued in traditional medicine and ritual.
carnivorous plants

Some of Borneo's pitcher plants took insects off the menu in favor of mammal droppings. It's an evolutionary triumph.
science

A past global staple you've never heard of, maslins are poised for a comeback.
forests

Environmentalists see small reforestation pilot sites around the capital of Amman as a first step to a greener future.
Video

This small Slovenian town has become a magnet for microbreweries.
Bled, Slovenia

On a small Slovenian island, diners can mix and match a classic cake into dozens of sweet and savory flavor combinations.
Maribor, Slovenia

The world's oldest grape-producing vine has survived four centuries of turmoil and even has its own anthem.
Condom, France

See and taste one of the oldest and rarest collections of Armagnacs in the world.
Want to see fewer ads? Become a Member.
From Around the Web
Atlas Obscura Trips
Forest to Table in Alpine Slovenia
View This Trip
Thanks for sharing!