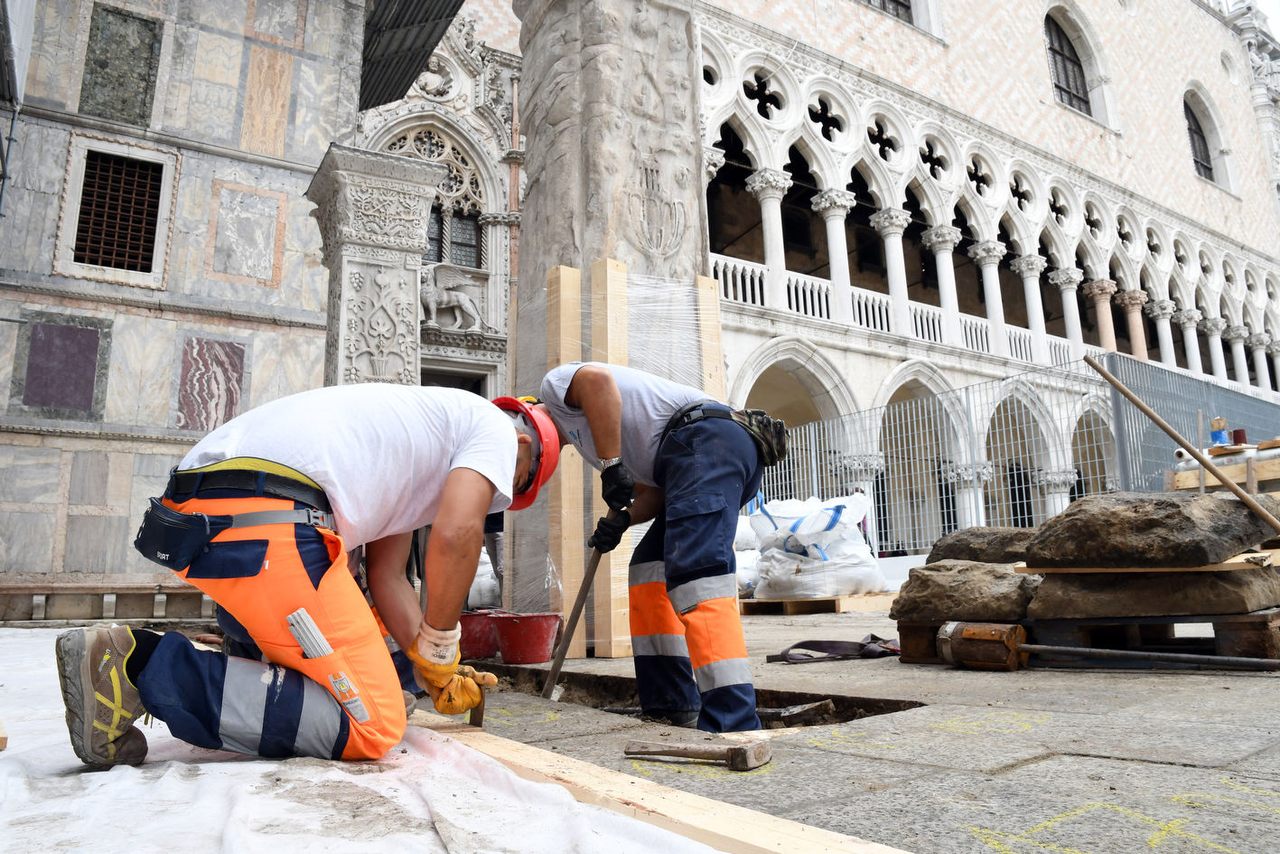 On a hot morning in August 2018, workers digging in front of Saint Mark’s Basilica in Venice to perform drain maintenance hit an unusually hard patch. They kept digging, and there was a skull, then some more bones. They halted work, and two fully articulated skeletons emerged, separated by a few inches of dirt.

The work eventually resumed, but skeletons have continued to turn up in the famed square. In November 2021, small excavators at work in the northwest portion—part of an effort to install a protective glass barrier against high tide—encountered 20 dark-colored skulls and various other bones. In June 2022, the same area produced 15 skeletons, including one skull with unusually well-preserved white teeth. The installation of the protective glass structure was put on hold to allow state archaeologists, led by Sara Bini, to study the finds, which so far have been dated to between the 14th and 15th centuries.

None of this is unusual for Venice. For centuries La Serenissima has struggled to make room for its dead.

“Venice, as a city built on water, had a space problem when it came to burials,” says Luigi Fozzati, who worked as lead underwater archaeologist for the local chapter of the Ministry of Culture for 20 years. Until 1804, when a law—from the then-ruler of Venice, Napoleon Bonaparte—banned burials within the city, Venetians used whatever limited space they could find in the city’s 117 islands. “People were buried within churches, outside of churches, and sometimes even in other parts of the city,” Fozzati says. Throughout the centuries, architects often had to build churches, piazzas, and palazzos on top of preexisting burial sites. “Whenever the government performs maintenance work on areas next to churches, I expect skeletons to pop up,” Fozzati says. This was probably the case in Saint Mark’s, where architects planned the famous square on top of a medieval cemetery.

Multiple plagues hit the city over the centuries, creating a glut of bodies, further adding pressure to Venice’s burial capabilities. The Black Death of 1348 killed more than 50 million people across Europe, and an estimated 40,000 to 70,000 in Venice, then a city of just 100,000 residents.

“Gatherings in restaurants and churches were prohibited and new rules about burials came into place,” says Fabio Zampieri, a medical historian at the University of Padua. “People who died from the plague had to be buried in uninhabited islands far from the city center to prevent contagion,” he continues, explaining that doctors in the 14th century believed that the plague could be transmitted by “vapors” emanating from dead bodies. During the nine-month pandemic, authorities struggled to fit up to 40 corpses per day on boats sent to designated islands at the outskirts of the city. The only exception was made for people from noble families, who could be still be buried in Venice—just under a lot of dirt.

During the second wave of plague, in 1423, the Venetian Senate took the concept of plague islands a step further. In 1424 authorities dedicated an island, Saint Mary of Nazareth, to plague patients for the first time. Afflicted patients were taken to the six-acre island, renamed Lazzaretto, for a 200-bed hospital where they could get care from friars from the Chiesa degli Eremitani, or Church of the Hermits. But as Zampieri says, there was no cure for the plague, so people were mostly taken there to die—away from the city center. The mortality rate for the bubonic plague was between 30 and 70 percent. Experts recently uncovered 1,500 skeletons buried on Lazzaretto, and believe that thousands more remain under the island’s green meadows.

In 1468 another island, Lazzaretto Nuovo (New Lazzaretto, while the other was dubbed Lazzaretto Vecchio, or Old Lazzaretto), was designated as a place to keep patients recovering from the plague and to hold people entering Venice by boat. Both groups were kept there for 40 days to monitor the emergence of plague symptoms—quaranta giorni in Italian. As soon as someone showed symptoms, they were taken to Lazzaretto Vecchio, Zampieri says. We owe the term and practice of quarantine largely to this 15th-century public health measure.

The third plague pandemic hit Venice from 1575 to 1577, claiming among its victims such high-profile Venetians as painter Titian and his son Oratium Vecellium. The death rate was as bad as the Black Death’s—about a third of Venetians—but the city’s population was almost double what it was at the time of the first plague in 1348. “In just two years bout 50,000 people died out of 180,000 inhabitants,” Zampieri says. “It was one of the worst pandemics that hit Venice.”

If space for burials was a challenge before, it became untenable.

Bodies buried on Lazzaretto Vecchio from prior to the early 15th century were wrapped in sheets and placed in rectangular trenches, in several distinct layers. Graves from later periods, by contrast, appear as piles of corpses hastily dropped on top of each other in large holes. As Vincenzo Gobbo, archaeologist at Ca’ Foscari University, told National Geographic, there was simply no time to take care of burials on a tiny island where as many as 500 people were dying each day.

Within Venice the death toll was sometimes so high that authorities did not have enough time to transport remains out of the city, so they resorted to piling bodies underneath public squares. “If you look carefully at some squares in Venice, you’ll notice that the pavement in the central part of the square is taller than its surrounding by around 7 inches,” Fozzati says. That extra bit of pavement, Fozzati explains, is full of skeletons from the 16th-century plague.

Indeed, pavement height in Venice is often dictated by plague graves. Traditional bookbinder and Venetian native Paolo Olbi says that Venetians learn this spooky fact as children. “Everybody knows that places like Campo Sant’Angelo or Campo Santo Stefano are full of bones,” he says. “If you step in the central part you are effectively walking over skeletons.”

“A law was passed mandating that people who died from the plague had to be covered by at least five feet of dirt,” Fozzati says. Sometimes, if authorities found that someone had been buried in a shallow grave, they would demand a reburial. During the fourth plague pandemic of 1630, the priest of the Church of San Simeon Grande had to lift the entire pavement up by five feet to comply with the law after authorities discovered that a priest already buried in the church had died from the plague.

According to Fozzati, these relics of past pandemics often emerge during routine maintenance work, such as installing wires or water discharge tubes. During his 20-year career he has received many calls from engineers and plumbers who accidentally bumped into skulls or femurs.

Italian laws on the preservation of cultural heritage mandate that workers who encounter archaeological material must notify state archaeologists. In the case of Saint Mark’s bones uncovered over the last four years, a team of experts led by the state archaeologist Sara Bini has been performing chemical analysis on the skeletons. “Right now we think that they probably were high-class people, since they were buried so close to the Basilica,” she says. “We are currently studying the remains to find out their sex, age, and any pathologies that they may have suffered from at time of death.” Last September, Bini and her team showcased the remains to the public to promote Venice’s archaeological heritage to locals.

These expert interventions are necessary, even as they slow down infrastructure work. “Twenty years ago I remember reading a news story about two skeletons found floating around in the lagoon,” Fozzati says. “The police thought that they belonged to two girls who had disappeared earlier that year and took them to the police station.” Fozzati immediately called the police. “I told them to be careful when touching the bones as the plague bacteria can survive for centuries if a skeleton is buried in humid grounds,” he says. Later research confirmed that the skeletons were indeed from people who had died centuries earlier, probably during a plague.

Skeletons and bones are not a rare sight in the marshy waters of the lagoon. “The erosion caused by motorboat waves can sometimes break the external structure of graves located near the canals,” Fozzati says, especially in the north part of the lagoon, where there are more boats. “Sometimes skeletons pop out of the graves and are found floating around by local fishermen.”

This could be only the beginning, thanks to sea level rise and overtourism. “The number of motorboats currently allowed to circulate in the canals generates too much swell,” Fozzati says. “This is putting at risk the foundation of buildings, including graves.” It turns out that the crush of tourists Venice sees year-round affects the dead as well as the living.

With proper training, dogs can follow their noses to human and animal remains from bygone centuries.
caves

Scientists know people were in Yukon 24,000 years ago. But what were they doing there?
skulls

The answer involves pseudoscience, politics, and a burglary at a windmill.
bones

In Malta, ‘Dead Men’s Bones’ Are a Sweet, Spiritual Tradition

The cookies are just one way that the island nation remembers the dead.
Video • Wonder From Home