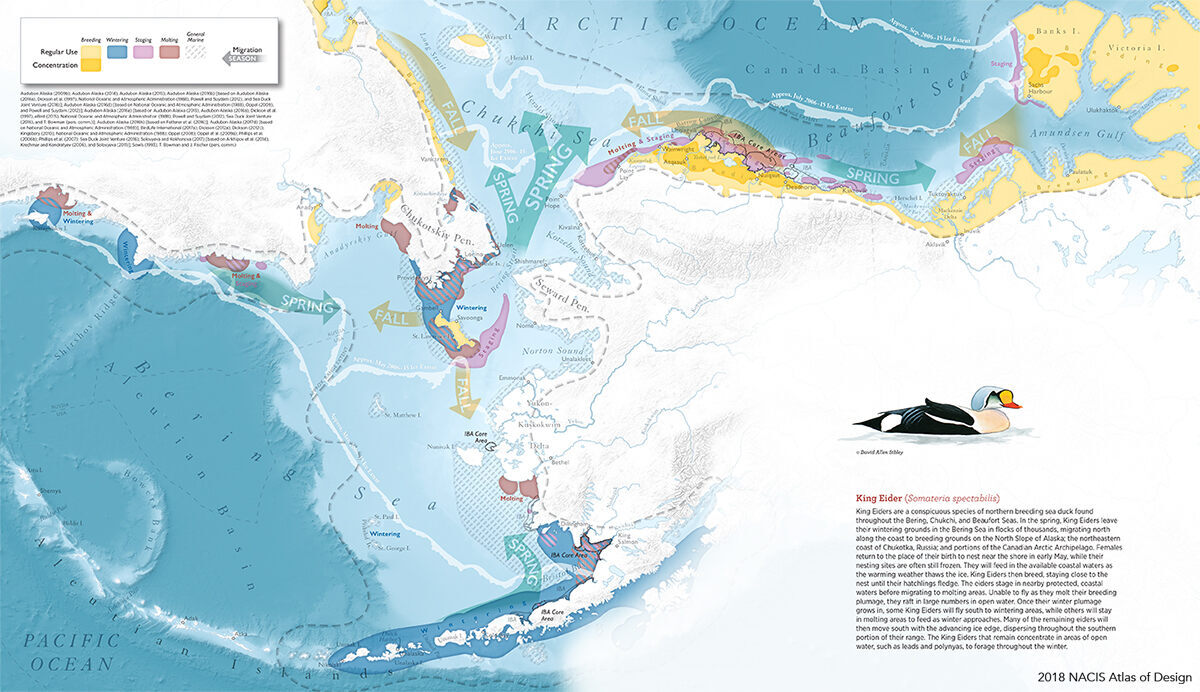 King Eider by Daniel P. Huffman visualizes the arctic life of the king eider sea duck. This is one of 135 pieces that Huffman produced for the Ecological Atlas of the Bering, Chukchi, and Beaufort Seas. All Photos: Courtesy 2018 NACIS Atlas of Design

Calling all map enthusiasts: the North American Cartographic Information Society will soon be releasing the 2018 Atlas of Design, its latest compendium of the world’s newest and best maps. Every two years since 2012, NACIS, a nonprofit organization that supports and promotes cartography, has released a new volume of maps, carefully selected from hundreds of entrants by a panel of judges. This year reveals a bumper crop of map-makers: NACIS received over 300 submissions for just 32 spots.

The entrants were judged by a panel of 12 and Lauren Tierney, who co-edited the Atlas of Design along with Alethea Steingisser and Caroline Rose, acknowledges a healthy divergence of views. “We don’t believe there’s any way to really be objective about something like this,” she says. “The judges were often in disagreement; almost every map was scored well by at least one judge and poorly by another. This disagreement was exactly our goal in bringing the panel together, because our aim was to ensure that the final selection was not dominated by one style or taste, but held something for everyone.”

While the editors of the latest edition of the Atlas of Design don’t identify any dominant trends in cartography over the past few years, “new techniques and cartographic designs emerge that are incredibly varied and different than the last year. As different techniques become popular in the field, they emerge in some of the entries we received.”

One vertical map depicts the boundaries of the Earth’s tectonic plates in startling, luminous colors. Another shows the life of a king eider sea duck. Another, by Heather Smith, is in the style of a 19th-century strip map: it depicts the Annapolis river, and runs six-feet long.

“The Atlas aims to inspire readers both within the field of cartography and without toward new understandings of design, and of the power that a well-crafted map can have,” says Tierney. “In an age when more and more mapping tasks are being turned over to computers, the Atlas provides one more answer to the question: What do cartographers do?”

Atlas Obscura has a selection of images from the upcoming fourth edition of the Atlas of Design, which will be released in October 2018; pre-orders are available until September 15, 2018.

The People Keeping Bees on Paris's Most Famous Landmarks

The Cowboy Cartographer Who Loved California

When Local Roller Rinks Had Their Own Collectible Stickers

Distinctive designs from the "Golden Age" of roller-skating.
design

Celebrating Berlin's Typography, Before It Vanishes

A tour of the city's most striking signs.
soviet history

A fresh perspective on the fragility and resilience of our world.
Read more
Thanks for sharing!