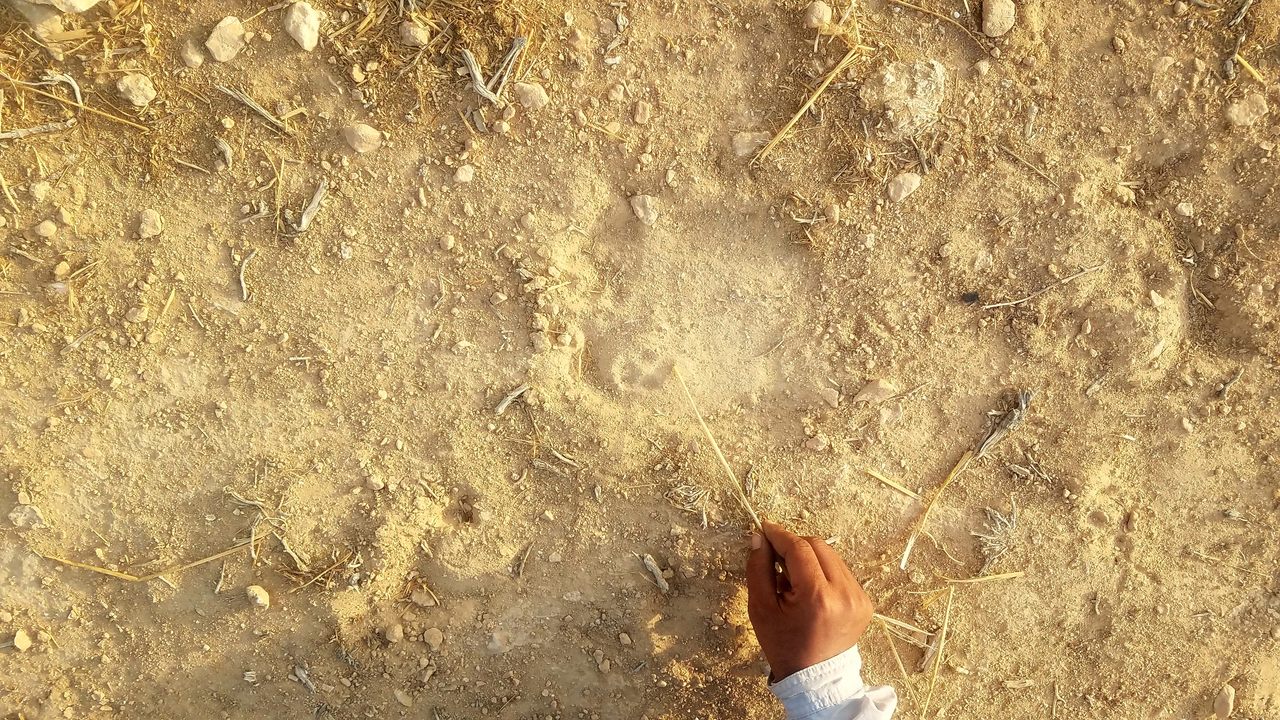 It's not just a print. It's a story. Gitit Ginat
In This Story
Destination Guide

The wolf had come from afar. The Aravah area, to be exact, dozens of miles away. It was possible that the camels, the horse, Barbara the dog, maybe the cat had seen it. Maybe they had chased it off.

No human saw this wolf, but Adel Walidie knows its story. He holds in his fingers a dry, crumbling dropping. From it he can tell that a wolf visited, that it was there a few days before, that it came from the Aravah. The wolf had eaten dates, and there are no dates in the Ramon Crater, a geological feature in Israel’s Negev Desert, where Walidie’s tent is. The closest place they are grown is in the Aravah.

Walidie, who belongs to the Azazme Bedouin tribe, owns a hospitality complex, Ben Midbar (“Child of the Desert”), on a cliff overlooking the crater. He learned from his father, Walidi, how to raise and train camels. He later served in the Israeli military and then studied in the Interdisciplinary Wilderness Therapy Program in Tel Aviv’s Kibbutzim College. He was the first Bedouin guide in the Society for the Protection of Nature in Israel, and also happens to be one of the better-known trackers in the Negev region.

Tracking was how the traditionally nomadic Bedouins—who had no central law enforcement body—guarded their property, herds, and homes, by investigating and chasing down a thief, for example. It was also developed as traditional technique for camel herding. In the not-so-distant past, Bedouin boys would leave their homes in the Negev with their camels and stay alone in the desert for months on end. Once a week, a family member would come to bring them food and had to track their location. The camels sometimes grazed, unattended across vast reaches of desert. When their owners wanted to gather them, they relied on tracks and their feces to find them.

These subtle signs in the desert contain volumes of information to the properly trained eye. By the depth of the tracks, a tracker can tell whether a camel was carrying anything on its back. They can also tell whether the camel was being led by person or roaming freely. If the camel’s droppings contain corn, rye, or any man-made food, then the camel was not grazing. Also, a camel being led would not graze nearby bushes, and if it did, it would only be along a set route. A roaming camel, on the other hand, skips around from bush to bush with no clear pattern.

Desert trackers such as Walidie apply this same knowledge to construct a story from a human footprint. This knowledge formed the basis for the cooperation between the Palmach (the Jewish underground army during the British Mandate for Palestine) and the tracker Sheikh Odeh Abu Muamar, before the foundation of Israel. Later the Israeli Defense Forces (IDF) formed a Bedouin Tracker Unit in 1970, which is in charge of finding enemy combatants or drug and arms dealers who cross the into the country. This has blurred the line between the traditional Bedouin practices and modern desert law enforcement.

But both sides of this cat-and-mouse game know the desert well. Drug and arms dealers who do business along the borders with Egypt or Jordan may be just as proficient in the techniques. So they can mislead, by carrying another person on their backs, or fixing a track pattern from a desert animal, such as a camel, horse, or donkey, to their shoes. They might switch shoes, or scatter pieces of equipment to delay a pursuing tracker, or change direction abruptly, or go in circles. The best trackers account for these tricks, and use imagination to suss out the intention behind tracks and signs.

Not every pursuit across the desert finds illegal activity. “One day, [the famed tracker] Abu Muamar ordered one of his soldiers to catch an infiltrator who crossed the Israeli-Egyptian border,” Walidie says. “The Bedouin soldier, named Khalil, crossed ravines and mountains in pursuit of the anonymous infiltrator, and finally found him sitting under a tree and eating. When Khalil carefully approached the man, he discovered it was his father, who lived in Egypt and wanted to visit some relatives in Israel. Khalil sat by his father and they dined together.”

Walidie sees himself as an envoy of Bedouin traditions, including tracking. He aspires to educate new generations of “desert children,” to “wean them off iPhones, acquaint them with the natural environment of the desert, and teach them how to preserve it.”

Unfortunately, there is nothing written he can use to pass on this knowledge. “There are almost no publications about tracking in the Arab world, and the massive body of knowledge gathered over the years by the Bedouins in Israel was also never studied by Israeli academia,” says ecologist Asaf Ben-David. “In fact, there is no single body that is concerned with organizing all the accumulated knowledge about tracking.”

About a decade ago, Ben-David, a PhD student at the University of Tel Aviv, founded Makom Mifgash (“Meeting Place”), a wild-animal tracking community that offers workshops, reading materials, and meetings. He also published a tracking guide, which he hopes to translate into English.

Tracking is a long-standing tradition and skill around the world. “The uniqueness [of Bedouin tracking] stems from the terrain. The marks left by humans and animals in the Negev are imprinted on non-sandy desert ground,” Ben-David says. “However, there is no substantial difference between Bedouin and Inuit tracking. Intuits can read snow, and Bedouins can read the desert.”

Modern tracking, including the techniques employed by the Israeli military, makes use of technological tools, but it is impossible to know the desert from a map alone, or from a car. The Judean Desert, the Negev, the Aravah, and Sinai have countless trails, paths, and ravines. Tracking in the desert means knowing them, one-by-one. Doing wildlife research in the desert, for example, also requires that intimate level of knowledge.

“To place cameras, you must first track. To check DNA in prints, you need to locate the prints,” says Ben-David. “This is true for both animal tracking and human tracking. In human tracking, such as in the IDF, there are situations where technology is not the answer, and a human has to piece all the information together. There are many layers of information. If a programmer ever tries to build a tracking AI, they will have to calibrate huge amounts of data, such as terrain, food, weather conditions, weight.”

“The modern world gives us new tracking tools, but this is dumb tracking,” says Walidie. “It suggests going outdoors without really going outdoors. Technological tools can’t make you understand where you are, in the deeper sense: to know how to listen, to focus, to become sharp, to feel. A person who can achieve this mindful focus will know where they are, even if they are a Middle Eastern person in Canada. When you don’t know where you are, you don’t know your place in the world.”

Inspired by a 15th-century editor, Paolo Olbi pushes to keep this from being the last chapter.
science

The adorable appearance highlights an unexpected ally in conservation.
caves

We're celebrating the first year of our daily podcast with some episodes that really just sound amazing.
world's largest

Podcast: The Belt and the Berm, Part 2