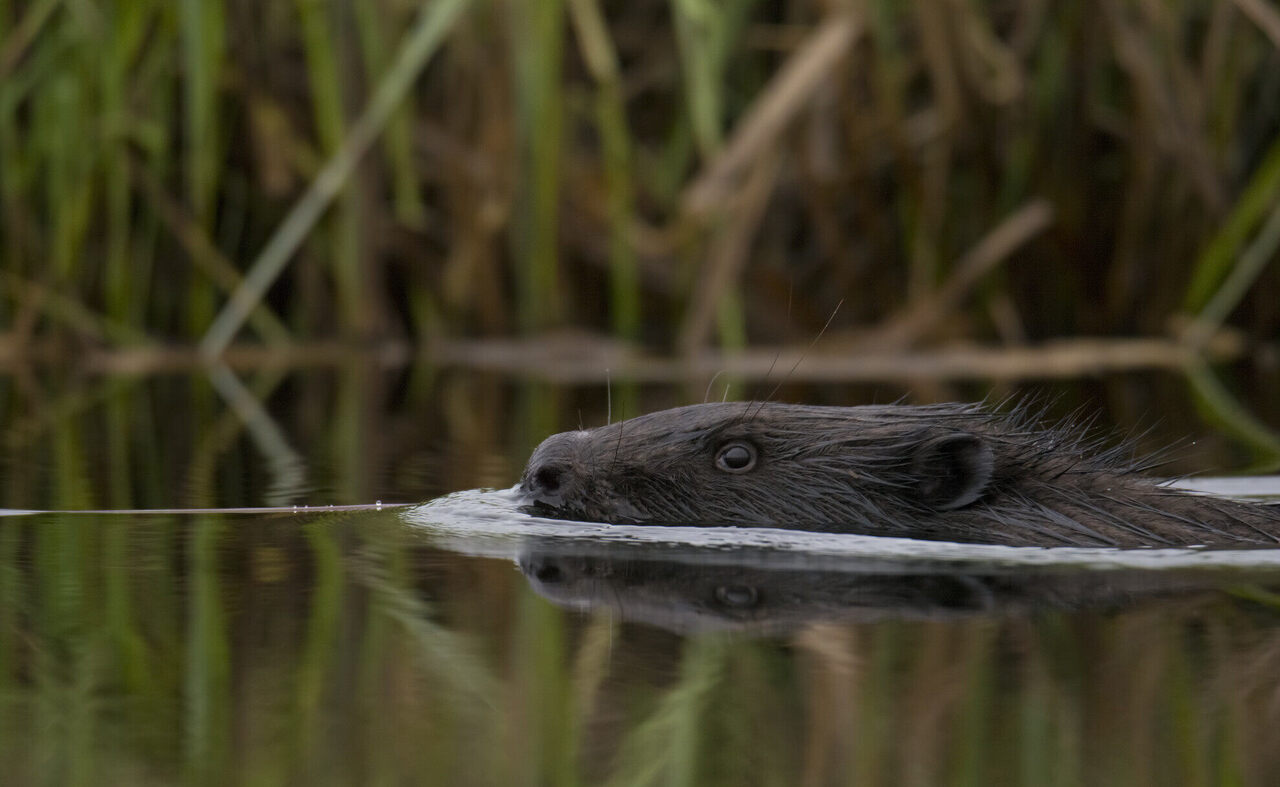 Welcome back to England, buddy! Artur Rydzewski/CC by 2.0
In This Story
Destination Guide

The future residents of the Holnicote Estate, which sprawls across a portion of Exmoor National Park in Somerset, England, are two families with dark eyes, strong teeth, and thick brown fur. As they settle in in early 2020, these new tenants—mums, dads, and probably a couple of kids—will go about making the place their own.

Because they are Eurasian beavers, they won’t fuss over hanging art or the color of the walls. Instead, they’ll head for a tributary of the River Aller or for a spring-fed pond. The two families will live in separate, fenced enclosures, each covering about seven acres of the estate’s 12,000, and then busy themselves with building dams.

The beavers are being moved in by the National Trust as part of an effort to reduce flooding and ramp up biodiversity. They’re one branch of a multiyear river restoration project, which is slated to wrap in 2024 and also includes bioswales (vegetated channels for runoff), ditches, and more.

“It’s a ‘control-alt-delete’ for the river system,” says Ben Eardley, project manager for the National Trust at Holnicote. Over time, as river landscapes are managed by humans, the waterways often become less complex and dynamic as ecosystems, Eardley says, essentially turning into “drainage ditches to move water through the landscape as quickly as possible.” The hope is that the beavers, by doing what beavers do, will decrease flooding, limit erosion, and improve water quality. Drone footage, time-lapse photography, and water-quality monitors will be used to help researchers gauge whether it’s working.

The families are some of the the latest in a smattering of Eurasian beaver reintroductions in the United Kingdom, where their ancestors went extinct several hundred years ago. The Eurasian or European beaver (Castor fiber) once roamed waters all over the continent, and in England they were once so common and beloved that many towns and rivers were said to be named after them—including Beverley in Yorkshire and Beversbrook in Wiltshire. But they found that it’s hard to have humans as neighbors.

The 19th-century naturalist James Edmund Harting recounted the Eurasian beaver’s troubled tale in his 1880 book, British Animals Extinct Within Historic Times. They were hunted and hunted and hunted across the United Kingdom. In 940, Harting writes, Welsh law dictated that the king had first dibs on any beaver, marten, or ermine hunters brought in, so his robes could be decorated with their pelts. Still, wild populations hung on for a while: Harting notes that a 1588 history of Wales reported that the River Teifi was downright lousy with “castors” in the 12th century. The creatures, “all hearie saving the tail, which is like a fish taile, as broad as a man’s hand,” built themselves great wooden “castells,” Harting reported, citing earlier dispatches. The rodents were commonly spotted in Scotland, too. Demand for their pelts and their castoreum (stored in sacs near the animals’ anuses, used by beavers to mark territory, and by humans for perfume and in food) finally sent England’s beavers waddling into extinction in the 16th century.

Beavers have long been considered “ecosystem engineers,” capable of tinkering with the order of things, and reintroduction efforts in the United Kingdom have been controversial for several decades. Back in the 1990s, in a paper in the journal Mammal Review, zoologists from the University of Oxford asked whether the efforts to revive the country’s beaver populations were a brilliant conservation tactic or just “nostalgic meddling.” More recently, a team of scientists from the University of Stirling, writing in the journal Freshwater Biology in 2016, examined beaver reintroduction in eastern Scotland and came to the conclusion that things were going pretty well. That team, led by ecologist Alan Law, found that streams with beavers were more biodiverse than others. They also found that beavers could help revive degraded landscapes, partly because their dams helped streams concentrate their nutrients.

Carol Johnston, a professor emeritus in South Dakota State University’s department of natural resource management and an expert in beavers’ work in wetlands, has found that the creatures naturally help mitigate floods and improve water quality. In the United States, where beavers never quite tottered to oblivion, humans have even installed “beaver dam analogs,” or BDAs, to do some of the same work, according to an article in Science by writer and beaver expert Ben Goldfarb. These interspecies developments, built by humans and colonized by rodents, seem to have some of the same positive effects that were observed in Scotland. In the Western United States, BDAs have buoyed steelhead fish populations and kept streams wet longer, Goldfarb notes, but also sometimes run into permitting snags.

Though tensions have occasionally flared between 21st-century humans and their flat-tailed neighbors—such as when farmers in Scotland groused that the beavers flooded farmland and filled ditches with dam-construction material—the track record of reintroductions in England has been strong. Beavers moved into West Devon in 2011 quickly constructed 13 dams along a narrow stream. “The beavers have transformed this little trickle of a stream into a remarkable, primeval wetland,” Mark Elliott, lead beaver project officer of Devon Wildlife Trust, told The Guardian. When beavers do overstep their bounds, Eardley says, it’s easy enough to nudge them along or discourage them from building dams, rather than resorting to lethal measures.

At the Holnicote Estate, the robust rodents will find hospitable conditions, including plenty of willow, which “is like beaver candy,” Eardley says. The areas will be enclosed by four- or five-foot fences that will allow otters and badgers to pass through, and deer to hop over. Eardley’s team hopes that these furry families will feel right at home—and will leave the woodland a little healthier than they found it.

For Sale: The Only Bar in a 14-Person Montana Town

Newspapers used to describe sightings of dozens at a time. These days, one researcher says, "most Australians have never seen one."
animals

It may take years—even decades—to understand the impact of disposable masks and gloves on the environment.
railroads

Khulan have been on the wrong side of the tracks for far too long.
Video

Garbage doesn't belong in water, but in some of Britain's urban areas, it makes for a surprising habitat.
Read more
Thanks for sharing!