Snails, Leeches, and Other Critters Are Right at Home on River Trash - Atlas Obscura
Want to see fewer ads? Become a Member. 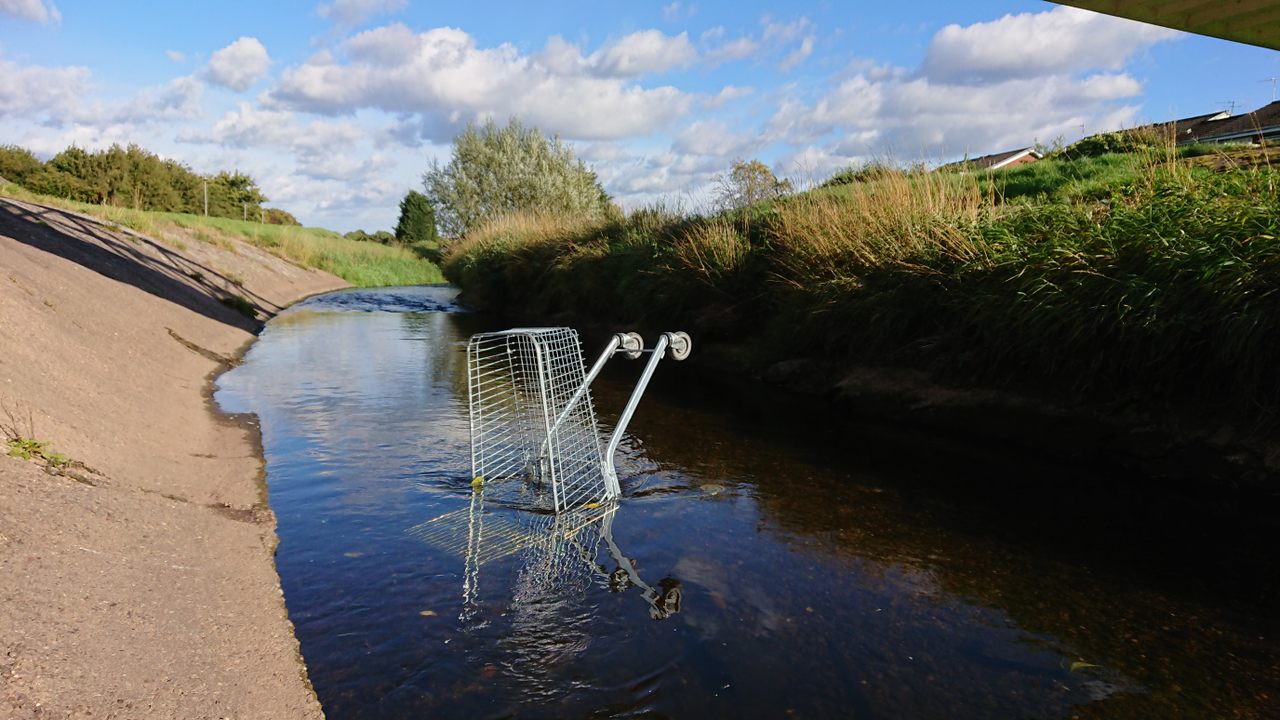 We humans are a filthy bunch. We’ve scattered our trash on landscapes the world over, from beaches and deserts to national parks, mountain peaks, and the deepest crannies of the ocean. By and large, our debris is an unwelcome and even dangerous addition to natural environments. In oceans, plastics can smother corals or clog animals’ stomachs; on land, as the coronavirus pandemic continues, birds might find themselves ensnared in the stretchy straps of single-use masks. Litter is never good—but life is resilient and sometimes animals make the most of it.

Researchers in the United Kingdom recently surveyed three urban rivers in Leicestershire and Nottinghamshire—a trio of gravel-bottom flows with little vegetation and a fair amount of trash. The humans were looking for invertebrates, specifically the ones that turn people’s castoffs into habitats.

Each river is visibly fouled. Flimsy bags are tangled just beneath the surface, half-sunk tires jut from the shore like peninsulas, plastic bottles cluster in eddies like little islands. Clumps of wet wipes suggest that some of the trash comes from sewage overflows or pipe snafus, according to Hazel Wilson, a hydromorphologist at the University of Nottingham and lead author of the team’s new paper in the journal Freshwater Biology. Food and drink packaging points to folks flinging things in as they pass by, or wind picking wrappers out of trash bins. Another primary source of litter is flytipping, or unauthorized dumping, Wilson says. There’s also more trash that can’t be seen, concealed by algae. “Most passersby are probably not aware of just how much litter there is in these rivers,” Wilson says.

But the creatures that live in the water are well aware of it all—in many cases, they’re camped out on it. The researchers found that these trash-dwelling communities are more diverse than those living on the rocks, a difference the scientists partly attribute to the varied shapes and surface textures of bits of plastic, fabric, metal, and other detritus, compared to small stones. “A general pattern in ecology is that biodiversity increases with complexity,” Wilson says. “So it could be that the more complex litter items provide more opportunities for different invertebrates.”

The rivers were teeming with gastropods, leeches, flies, and more. In all, the researchers tallied 16,894 macroinvertebrates—the ones large enough to see without magnification—spanning 61 taxa. The team also noted five taxa that live only on litter, not rocks, including Calopteryx splendens, a species of damselfly whose wings look smudged with inky thumbprints. Of those five kinds of creatures, the researchers noted two species that almost exclusively opted for plastic or fabric (which the team lump under the umbrella of “flexible litter”). Limnophora, a silvery fly, and the mud-brown snail Bathyomphalus contortus were fiends for the stuff. The researchers suspect that these bendy, yielding materials may mimic the structure and movement of aquatic plants.

“I think it’s really interesting that [the paper] shows that anthropogenic litter is not always only negative,” says Sonja Ehlers, a biologist at the German Federal Institute of Hydrology and University of Koblenz-Landau who has studied how caddisflies incorporate bits of plastic trash into the cone- or tube-shaped cases they build and live in. Ehlers, who was not involved in the research, says that Wilson’s team’s paper is one of the few to look at human litter in freshwater systems (considerably more work has tracked its consequences in marine environments). Ehlers was curious about the specific composition of the plastics—and whether the animals were ingesting them—and how the results might vary based on season and weather. (The team sampled each site twice, on consecutive autumn days.) Heavy rains might wash more trash into the rivers via floods or discharges from overloaded sewage pipes, Wilson suspects.

Though the trash resulted in a biodiversity bump, the takeaway isn’t, “Hey, maybe garbage is fine; by all means, dump away.” “Litter has an overall negative effect—it’s unsightly, it can harm animals that consume or become entangled in it, and many items can last indefinitely and break down into harmful pollutants like microplastics and toxic chemicals,” Wilson says. “We definitely don’t want to see this as justification of putting litter in rivers, or for leaving it there.”

Instead, Wilson sees the findings as a call to restore urban rivers, and to replenish them after clean-up efforts. After trash is fished from the water, “we need to think about replacing the habitat lost during removal with alternatives that don’t harm the environment,” Wilson says. That might look like drowning some branches or installing some aquatic vegetation to emulate the less-terrible attributes of our waterlogged garbage.

The Architect Baking Bread Along the Border Wall

It may take years—even decades—to fully understand the impact of disposable masks and gloves on the environment.
animals

These ecosystem engineers have a good track record in helping restore wetlands.
islands

The adorable appearance highlights an unexpected ally in conservation.
Video • Wonder From Home