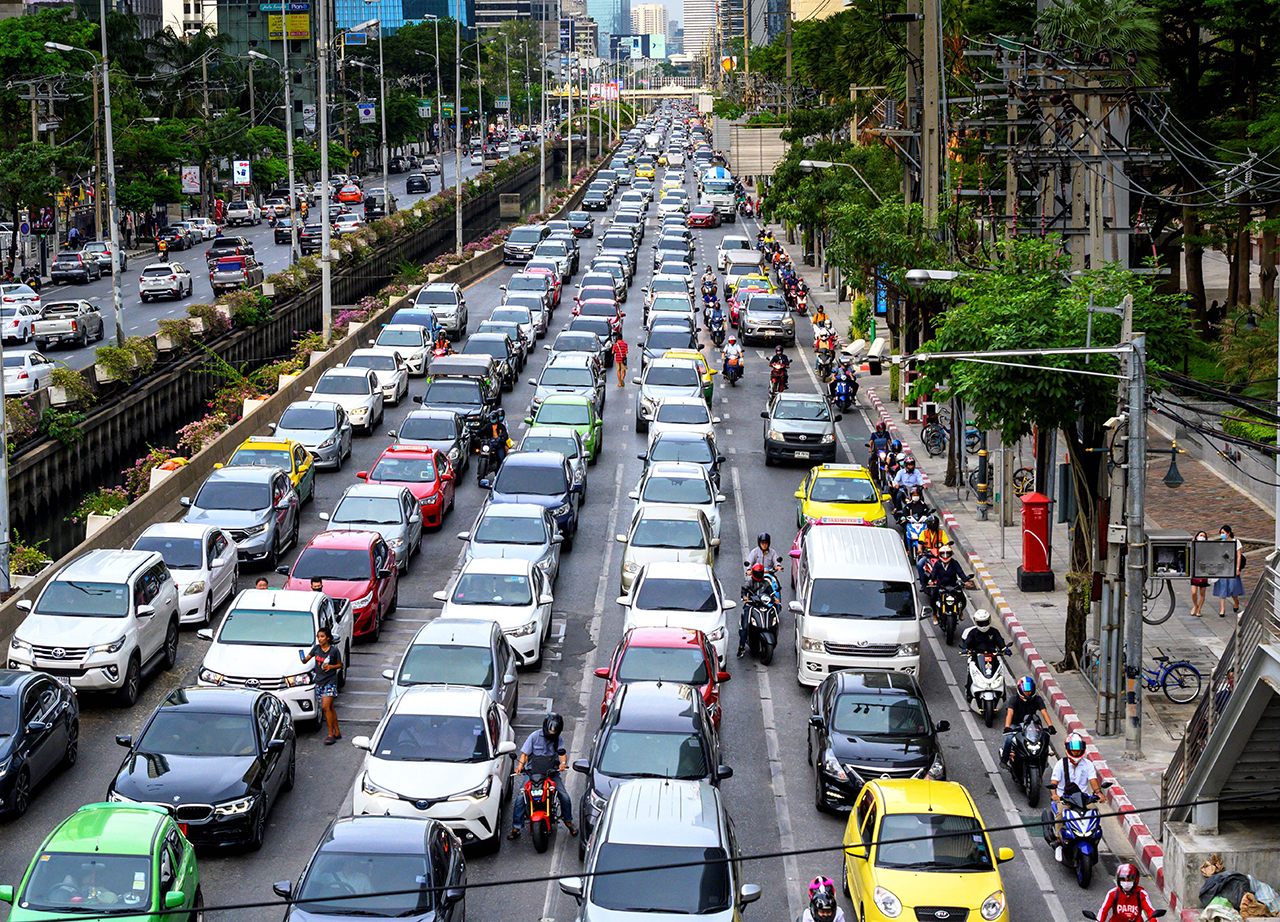 Cars at a standstill in rush hour in Bangkok on May 25, 2020, following the lifting of the city's pandemic restrictions. MLADEN ANTONOV/AFP via Getty Images
In This Story
Destination Guide

Bangkok is a huge city—more than 10 million people with countless more coming in each day from neighboring provinces for work. The result, as you might expect, is a vast sprawl of bumper-to-bumper traffic: street cars, trucks, and motorcycles, sidewalks teeming with pedestrians, even canals full of boats.

The Thai capital’s infrastructure is part of the reason for the intense gridlock, since the city grew rapidly, with little land use or transportation planning. Its road surface area accounts for only about 8 percent of the metropolis, compared with 20 to 30 percent in other cities, according to Al Jazeera. In other words, it’s got less than half the number of roads it really needs. And that means waiting. Lots and lots of waiting.

Traffic is something you have to plan for in Bangkok, but there are, of course, times when life just won’t wait for the bus stuck in the intersection to make its way through. Take the young woman whose water had just broken … in the back of a taxi. People who live in metropolises such as Bangkok have a way of adapting to these kinds of difficulties. In this case, the taxi driver didn’t call 911* but rather JS100, a local radio station. More than that, JS100 is an institution born of the city’s traffic: part emergency hotline, part entertainment, part lost and found. It’s the communications hub of the entire city. According to journalist and podcast producer Pailin Wedel, “They’re the guardian angel watching over the city … From letting people know about accidents, to bottlenecks in traffic, to someone forgetting a huge amount of money in the back of their taxi they’re trying to track down, all the way to ‘Oh, someone’s found a big python in their bathroom, can someone come rescue them?’”

The radio station staff then summoned the authorities to help, but not just any cops will do. In another nod to the intractability of Bangkok’s traffic, the city employs more than 100 specially trained motorcycle midwives, or officers who carry full medical kits on their backs and are taught how to tie the umbilical cord and ensure that a baby’s airway is clear of obstructions. They ride motorbikes to make it easy for them to weave in and out of traffic. Since the system was set up by the Royal Thai Police in 1993, they’ve successfully delivered 184 babies.

Wedel rode along—on the back of a motorcycle—with one of the midwife/police officers, Colonel Athibadi. And the call came in, via the radio station, for the woman whose water broke. In this case, Athibadi decided not to help her deliver in traffic, but rather to clear the cars and buses out to get the mother-to-be to the hospital. That itself is no easy task in Bangkok—two police motorcycles lead the way, sirens blaring to part the flood of vehicles. “I am used to riding on motorbikes in Bangkok, but weaving in and out of traffic on the back of the police motorbike was probably the fastest I’ve ever gone on two wheels,” says Wedel, adding, “It was exciting but also terrifying.” And … they made it, just in time for the arrival of the couple’s first child. But Bangkok’s motorcycle midwives are ready for a roadside birth, if it comes to that.

To learn more about how Bangkok has adapted to its unique challenges, listen to Far Flung with Saleem Reshamwala (formally called Pindrop), a podcast produced by TED that travels around the world in search of surprising and imaginative ideas. You can find it on Apple Podcasts, Spotify, or wherever you listen to podcasts.

* Correction: This article was updated because Bangkok does have a 911-like emergency hotline, but many people choose to call the radio station instead.

How to Scour the Landscape for Cultural Heritage From Your Home

The treat represents the diverse history of the Kudeejeen neighborhood.
monks

In a country with only a few hundred female monks in the Theravada branch of Buddhism, the lifestyle is quietly radical.
feminism

“The step-up in your pulse when a nifty number looks your way isn’t love. That’s sex, mister.”
Video