The World Is Studded With Artificial Mountains - Atlas Obscura 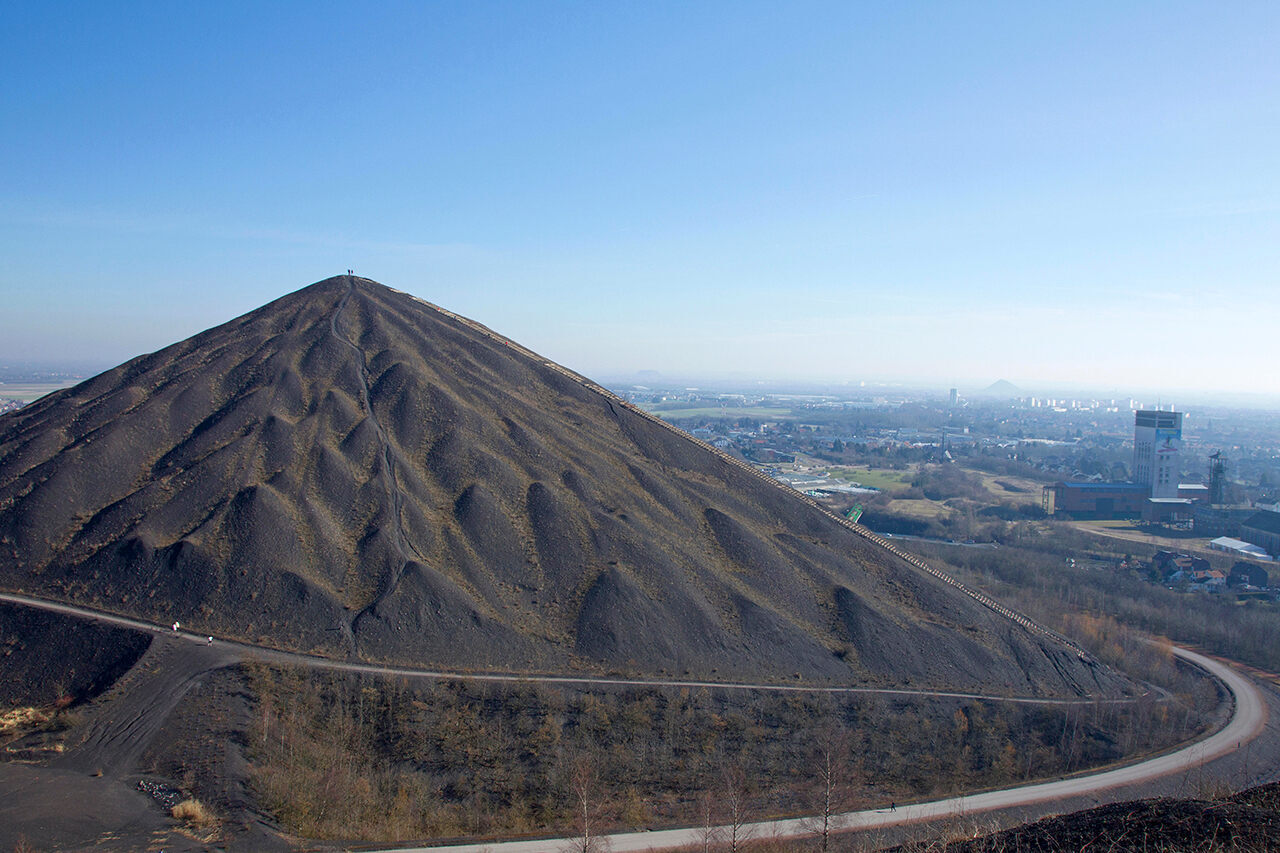 A towering slag heap in France. Caroline Vancoillie / Alamy
In This Story
Place

From atop the jagged mountain, cars, people, and houses appear as tiny versions of themselves, the noise of their day to day activity muted so high in the air. Scrubby vegetation grows from cracks in the rock, soaking up the sun and rustling in the slight breeze. Birds caw as they alight at the top of a slope, observing the expanse below them.

The mountain is just another part of the topography to those that live near it, but it is not a natural part of the landscape. The mountain is completely artificial, a colossus formed not by eons of geologic change but the vigor of industrial concrete production. Artificial mountains have sprung up all over the world, the result of hellish manufacturing processes, piled construction and mining waste, or in some cases built deliberately to add a humongous new feature to the horizon.

The majority of the artificial mountains in the United States are the byproducts of cement and steel production, formed at the height of those industries between the late 1800s and mid-20th century. Cement, the binder that holds concrete aggregate together, is made by heating limestone and clay into a product called clinker, which is then ground with gypsum to make powdered cement. Though cement has been made in the U.S. as long as people have needed it, production really got underway in the 1920s, with 159 plants in 33 states operating by 1929. These mountains have long dotted industry-heavy areas of the United States and can be truly gargantuan in scope. Brown’s Dump in West Mifflin, Pennsylvania, for example, was over 200 feet tall and covered the equivalent of 130 city blocks.

Despite their size, it’s almost impossible to know how many there are, as there was no concerted effort to keep track of them while they were being created, says Dr. Heather Brown, Director of Middle Tennessee State University’s School of Concrete and Construction Management. Dismantling those that do exist can be tremendously difficult and expensive, but there is potential money to be made from repurposing them.

“It’s easier to create new concrete than to crush it onsite,” she says. “But the material is still usable. It can be crushed, ground, or turned into powder.”

Other artificial mountains are formed from slag, the molten rock separated from iron ore during steel production. Slag is dumped in a waste pile, which hardens into concrete-like rock when cooled. Ron Baraff, Director of Historic Resources and Facilities with Rivers of Steel, an organization dedicated to preserving Pennsylvania’s industrial history, used to play on a former slag dump called Squirrel Hill when he was a kid, one of the numerous dump sites in the Pittsburgh area. The construction of a slag mountain could be a mesmerizing sight. From 1913 until the 1960s, residents of West Mifflin, Pennsylvania, parked their cars along an embankment to watch trains pulling enormous cars with massive cauldrons full of molten rock. In some cases dozens of cauldrons were emptied at once, pouring their molten rock down the side of the hill in eerily beautiful rivers. Observers said they looked like symmetrical rivers of fire and lit the sky red.

There is a darker side to this beauty, however. Environmental studies of the so-called Bairstow Mountain, a slag pile and industrial waste heap in Hammond, Indiana, revealed that runoff was deluging the Calumet aquifer with heavy metals and other hazardous compounds. In 2018, geese living on a golf course built on the same mountain began dying mysteriously, possibly after ingesting lead after part of the pile caught on fire and released the toxins inside.

Smaller-scale artificial mountains can be problematic as well. Outsider artist Leonard Knight built Salvation Mountain in Niland, California out of concrete, sand, and accumulated junk. He used so much salvaged paint to cover it with brightly colored religious messages that the county declared the site a “toxic nightmare” due to the amount of lead in the soil and considered dismantling the mountain and hauling it to a toxic waste dump.

Salvation Mountain collapsed under its own weight in 1988, demonstrating the concerns with another type of artificial mountain—those created from piling construction debris or mining waste.

Piles of the rock extracted during mining, also called spoil tips, can rise hundreds of feet into the air. Their loose composition can make them unstable and quite dangerous. In 1966, more than 115 children were killed when a mountain made from coal mining debris slid into a school in Wales. A similar disaster occurred in late 2015 when a steep mountain made from building construction leftovers in Shenzen, China collapsed, sent a landslide of mud and concrete onto the factories and neighborhoods below, and caused more than 85 people to go missing. In 2016, an artificial mountain built to extend an airport runway in Charleston, West Virginia collapsed and destroyed a church and a home.

The creation of new concrete mountains slowed to a stop as competition, new industry, and advancing technology effectively rendered massive steel mills obsolete by the 1980s. So what do you do with these leftover mountains?

Concrete producers have been reusing leftover concrete for as long as they’ve been making it, Baraff says. Leftovers can be crushed up and used for road bed substrate, components for more concrete, and even fish tank gravel. But recycling concrete can be quite costly, and some municipalities are reticent to re-use old concrete because of the testing required before it can be used in state projects.

Even so, many municipalities have been happy to keep the proceeds that come from putting the mountains to new use. This is what happened with Brown’s Dump in Pennsylvania. Part of it was quarried and used for building roads and bridges, while another part was crushed and reused in the construction of a mall on the same grounds in 1979.

Other communities have realized that the vast expanses of slag-covered land can be readily repurposed. Indiana’s Bairstow Mountain was covered and turned into a golf course and marshland, while an artificial mountain in Pittsburgh has been turned into a high-end housing development called Somerset at Frick Park.

Slag piles also have another valuable use. One company in Johnstown, Pennsylvania established itself by extracting ferromanganese from slag, an alloy used to harden steel. Given that ferromanganese is usually imported and can sell for hundreds of dollars a ton, one mountain recycler told Baraff that such a business is like “having a license to print money.”

Too much leftover concrete is of course costly to manufacturers, which is why many in the industry are trying to better estimate the amount of material required for a project or invest in a recycling process that separates mixed concrete into its constituents for reuse. Nevertheless, there have been some deliberate—and surprising—attempts to build new concrete mountains.

Some European architects made waves a few years ago with outlandish plans to boost tourism by building artificial mountains on the same scale as real mountains in relatively flat areas of Germany and the Netherlands. The conceptual drawings show comically large mountains shooting out of the flat landscape like something in a fantasy novel, covered in goats, luxury suites, ski facilities and other attractions. Cranes would build the mountains block by enormous block, then shave them into appropriately craggy shape.

On the slightly more practical side, researchers with the United States’ National Center for Atmospheric Research were given a $400,000 grant in 2016 to explore the idea of creating an enormous artificial mountain in the United Arab Emirates to bring more moisture to the increasingly populated and water-hungry desert city of Dubai. Mountains facilitate rain by forcing warm, moist air to rise and cool, creating clouds. Coupled with the UAE’s experiments in cloud-seeding through its UAE Research Program for Rain Enhancement Science, a brand new mountain might make more rainfall possible.

These ideas are far off (if not completely implausible), and would require a tremendous amount of resources in a world already feeling the effects of humanity’s thirst for construction. Today, estimates hold that enough concrete is produced around the world in a single day to create the equivalent of China’s Three Gorges Dam, which, at 23 million cubic* meters, is one of the biggest objects ever constructed.

And this isn’t even taking into account the buried concrete leftovers that are just as prevalent (if not more so) than concrete mountains. There are approximately 500,000 abandoned wells and mines in the United States, Dr. Brown says, many of which are filled with concrete and are even less accessible for reclamation or reuse than the aboveground piles.

“Construction waste is a hot-button issue,” she says, but “I don’t know if there will be an effort to catalog the [mountains or buried concrete waste], especially if they’ve been there for a while. Many are located near areas of industry, but many were also located in remote locations—out of sight, out of mind.”

* Correction: This story originally referred to the volume of the dam in “square meters” rather than “cubic meters.”

An analysis of the 10-foot-long appendages shows that as the Arctic warms, narwhal diets are changing, and their bodies are accumulating more mercury.
islands

What Is Killing Albatross Chicks in the Falkland Islands?

The population is healthy overall, but a mysterious contagion has researchers looking for answers.
wwi

1:26
Want to see fewer ads? Become a Member.
From Around the Web
Related

An abstract view of a changing world.
Read more
Thanks for sharing!