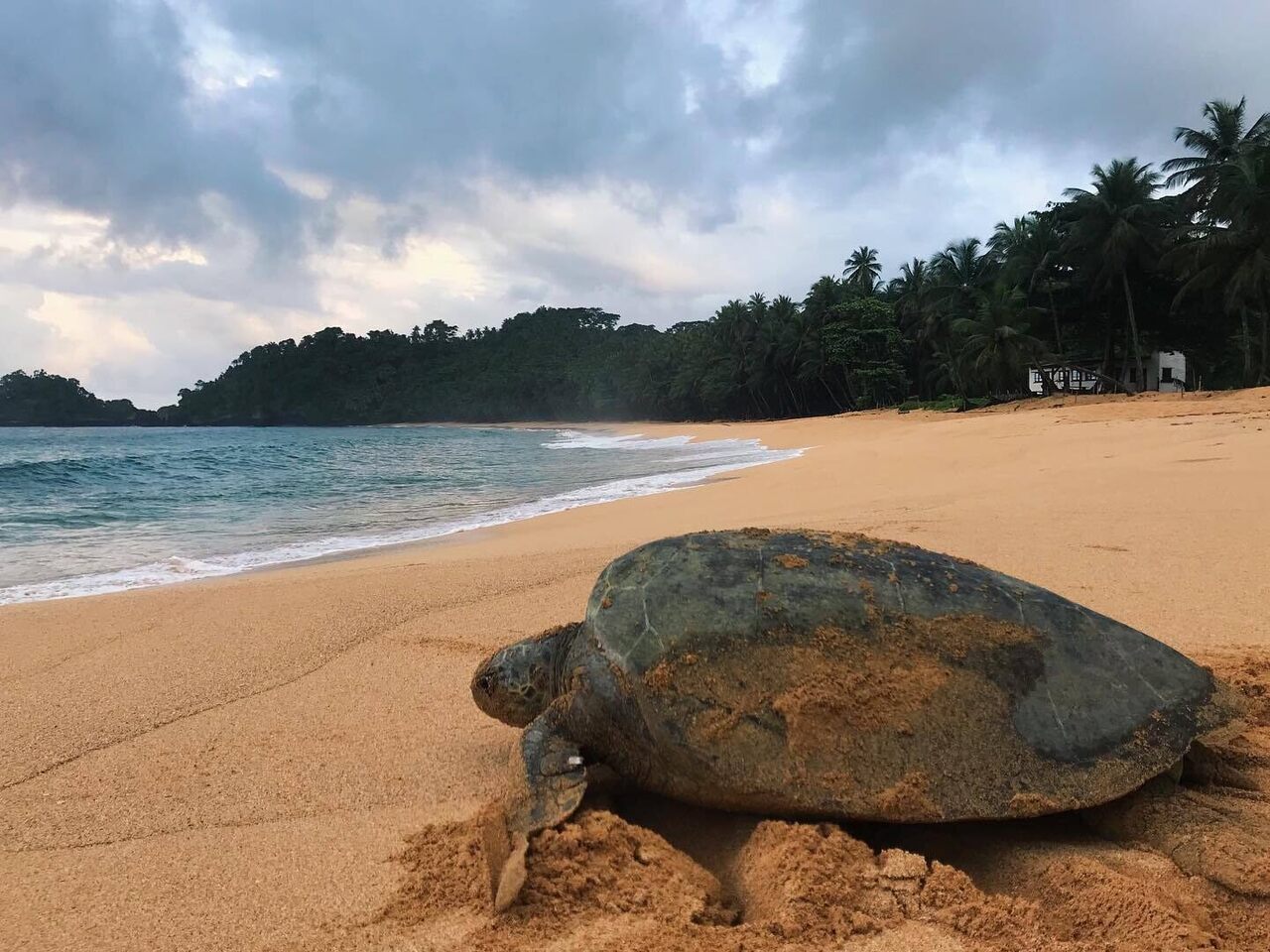 The endangered sea turtles of São Tomé now have the island's biggest pop star on their side. Courtesy of Programa Tatô/Garbiela Fernandes
In This Story
Destination Guide

Few instruments of social change can match the power of pop music with a message. With a catchy enough earworm, hitmakers can provoke the masses to “Fight The Power,” “Give Peace A Chance,” or even “Impeach the President.” São Toméan pop legend João Seria has an even more pointed message for his listeners: “If you see sea turtle meat for sale, don’t buy it.”

Seria’s breezy, bouncy, turtle-friendly 2017 song “Mem di Omali,” or “Mother of the Sea,” was actually part of a calculated conservationist endeavor, the outlines of which are covered in a newly released paper by scientists from the University of Oxford and Programa Tatô, a São Toméan NGO. To raise awareness of sea turtles’ endangered status and curb the local market for their meat, the international team launched a mass-marketing campaign in São Tomé of music, theater, and food festivals. It is having a marked effect, and not a day too soon.

Lead researcher and Oxford zoologist Dr. Diogo Verissimo is blunt. “If things don’t change, in a few decades we won’t have any sea turtles left in São Tomé,” he tells me over the phone. The five species of sea turtle that thrive around the islands of São Tomé and Principe not only play a crucial role in maintaining marine biodiversity, but also attract tourism on which the local economy depends, according to co-author Dr. Ana Nuno.

“It’s an animal that’s been heavily exploited for centuries,” says Verissimo. São Toméans are not to blame for the sea turtles’ endangered status, he emphasizes. The industrial-scale harvesting of yesteryear by the Portuguese is what laid turtle populations low. But the animal’s vestigial role in modern São Toméan cuisine keeps them endangered.

While it’s no daily bread, sea turtle meat and eggs do feature in the São Tomé and Principe’s food. São Toméans mark special occasions such as birthdays, Easter, and anniversaries with a stew called calulu that often includes sea-turtle meat. According to a 30-year-old São Toméan who wishes to remain anonymous, they traditionally blanche cleaned turtle meat with sape-sape leaf before stewing it with aromatics, chili, lime, and tomato paste. At other times, they beat the eggs with corn flour to make omelets. Turtles are typically harvested during their nesting period, he writes in an email, from September to March. “But there are also out-of-season catches, from underwater fishermen.” Seria himself, who is 73 years old, admitted to researchers from Programa Tatô that, for decades, he partook in the regional specialty.

Until 2015, São Toméans bought and sold turtle meat in the island’s central market. While a law that year banned the possession, trade, or sale of turtle meat, clandestine consumption persisted, though Verissimo is reluctant to even call it a black market. “It was pretty open,” he says. “If you asked for it, you could still get it.” When conservationists saw the ban was ineffective, the only solution became what Verissimo calls “voluntary compliance”; people had to decide not to eat sea-turtle meat of their own volition.

To make a persuasive case, the team of mostly Portuguese scientists conducted more than 1,000 interviews probing islanders’ thoughts on sea-turtle products, marine biology, and media. To ensure accuracy, the team employed proxy interviewers. “The reality is that me, a Caucasian man, going into these communities and asking these questions would cause a distraction,” says Verissimo. The interviews revealed that both rural and urban communities believed sea turtles would never go extinct. Further, while politicians ranked as the least likely to alter social behavior, figures from television and radio ranked as the most likely. Enter the pop charts.

Programa Tatô approached Seria, an ambassador of São Toméan culture, with their research. To say he was receptive would be an understatement. “We just had a conversation about sea turtles’ role in the ecosystem,” says director Betânia Ferreira Airaud. “Then he wrote and recorded the song in one day.”

In the video, a bare-chested Seria signals a thumbs up while casting an earnest glance toward the crystal-clear waters off the pristine beach, singing: “My people, let the sea turtle live / She was born in São Tomé, traveled throughout the world and returned to lay her eggs in this country.” He trades verses with another São Toméan pop star, Sebastiana, and weaves in and out of three local dialects, which, according to Verissimo, was by design. “We wanted the song to be as close to the people as possible,” he says. The song was broadcast across the island’s state-run TV and radio and amassed more than 30,000 hits on Youtube.

Still, the blithe, beach-ready single was just one of the conservationists’ weapons in the war on the turtle market.

They collaborated with a local amateur theater group to write and perform radio soap operas after the nightly primetime news, stocked with key messages and slogans. They organized youth soccer tournaments under the campaign’s name, “Mem di Omali.” They distributed bumper stickers, which read, “I don’t transport sea turtles,” amongst the fleet of taxis that often bring shoppers to and from the central market. They even held a day-long festival centered around a cooking contest and well-known local chefs presenting turtle-free versions of São Toméan dishes that typically employ sea-turtle meat.

Detailed counts of sea-turtle populations will be revealed later this year, but already a change is in the air. Preliminary results show not only an uptick in sea-turtle numbers, but a shift in social behavior, according to Verissimo. The turtles are now more visible features of local beaches, and São Toméans rally around the nesting mothers. Programa Tatô fields calls from breathless beach-goers who see them onshore and promise to watch over them. Coordinator Sara Vieira says youth programs have been particularly effective. “We have kids calling the police to denounce even their own families,” she says. “They’ll tell on their uncle for having a sea turtle in the house.”

Seria’s song is a lighthearted solution to a dire problem, but it’s proving no less effective. “All fishermen who live in coastal communities, do not catch turtles,” he sings. It’s simple pop you can feel both onshore, and underwater.

To Study Pesky Aphids, Scientists Suck Them From the Sky

Every summer and fall, giant vacuums gobble up insects for 13 hours a day.
scientists at workmarketingmarineturtlesendangered animalsseafoodconservationmusicscience

Scientists Tracked Truly Enormous Tuna From Way Up in the Air

Drones helped researchers keep up with fish that are longer than a person and as fast as a car.
science

The Slippery Problem of Measuring Enormous Hunks of Hail

They’re huge, rare, and melting all the time.
Video • Object of Intrigue

Lauded by poets, a Scottish town's hot-smoked haddock may date back to the Vikings.
Gastro Obscura

North Carolina's seasonal delicacy is brought to you by algae.
Related

Local insect farms could save lemurs, baobabs, and more.
Read more
Thanks for sharing!