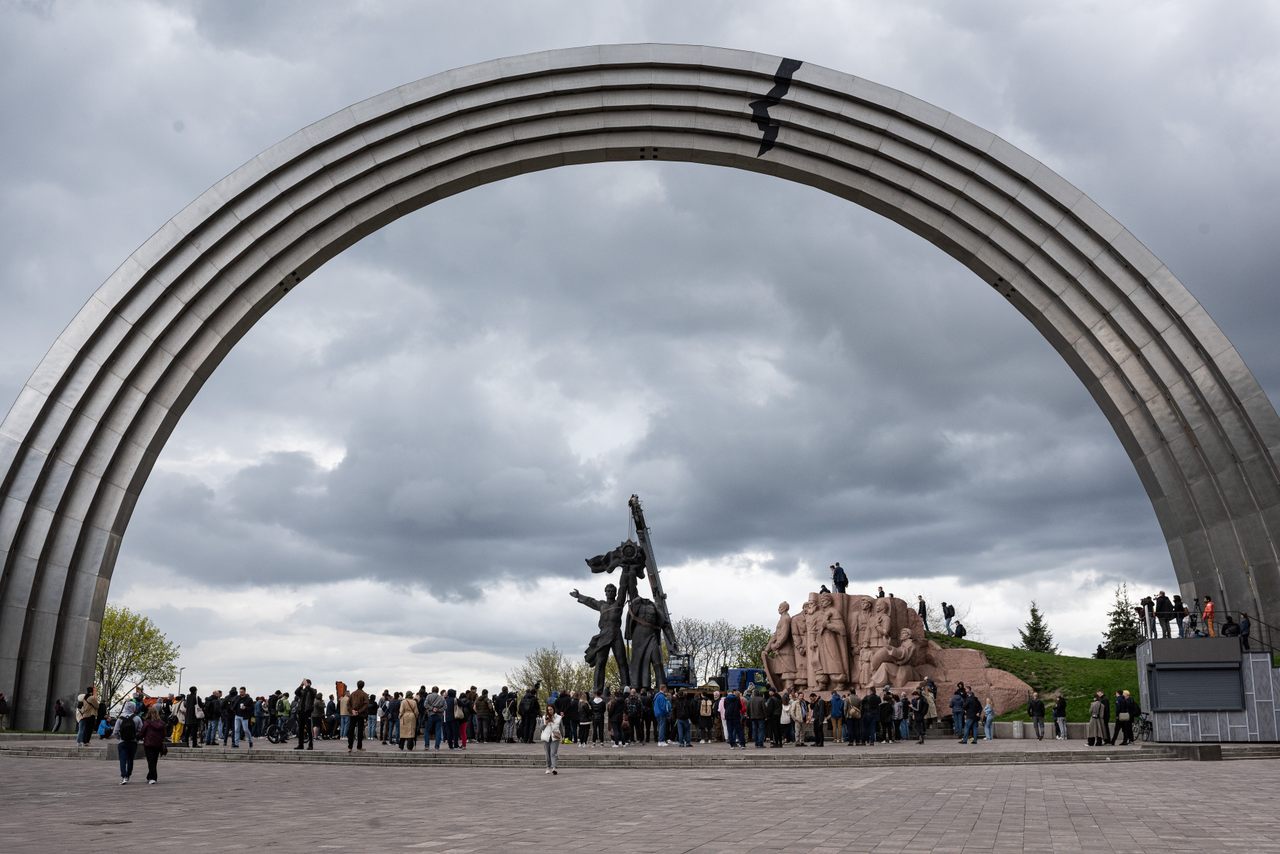 The monument once known as the Arch of the Peoples' Friendship has long been a source of controversy in Kyiv. In 2018, a "crack" was installed on the arch to symbolize the fracture of the Ukrainian-Russian relationship. Alexey Furman / Stringer via Getty Images
In This Story
Destination Guide

A 115-foot-high metal parabola known as the Arch of the Peoples’ Friendship sits in the center of Kyiv. Big enough to be seen from a mile away, it arcs over a large observation deck that was also long home to a 26-foot-high statue of two workers—one Ukrainian and one Russian—and a granite stele depicting the 1654 Pereyaslav Council, which started the incorporation of Ukraine into the Russian state. This huge monumental park offers a view of the Dnipro River and was very popular among locals before Russia’s full-scale invasion in late February 2022.

With bloody fighting underway just a few miles from Kyiv, many residents fled the Ukrainian capital; you could no longer meet any people strolling near the arch. But on the rainy afternoon of April 26— almost four weeks after the Russian army had retreated from the city outskirts—a few dozen people again gathered under the arch, not for a promenade but to watch a crane pull down the workers’ statue.

Kyiv mayor Vitali Klitschko was among those present at the dismantling of the monument, one of several constructed in Kyiv in 1982, the year the Communist Party leadership celebrated the 1,500th anniversary of the city’s founding (though there is conflicting historical evidence on the origins of Kyiv). When it was erected, the base of the worker’s statue read, “To mark the reunification of Ukraine and Russia.” But the inscription was removed by protesters in the years after the USSR collapsed.

Klitschko, mayor of Kyiv for eight years, had never been active in removing Soviet and Russian symbols, but in April, he posted an emotional explanation on his Facebook page for why the workers’ statue must be removed now, in the midst of war: “russia [sic] ‘marked’ its attitude to Ukraine by brutally killing peaceful Ukrainians, destroying our cities and towns, and is striving to destroy our statehood. 8 meters of metal of the so-called ‘two people’s friendship’ will be removed from the center of Kyiv.” He also promised that the granite stele would be covered and that the Arch of the Peoples’ Friendship would be renamed and illuminated with yellow and blue lights, the colors of the Ukrainian flag.

The Ukrainians’ attitudes toward the monumental park in the center of Kyiv has never been unambiguous. In the 1980s, some in Ukrainian society dubbed the arch the “yoke,” a reference to its shape and its colonial nature. “Peoples’ friendship”—fraternal cooperation between nations—was one of the USSR’s defining ideological principles and monuments to this “friendship” between the USSR and the Indigenous people and smaller countries under its control marked not “annexation” or “conquering” but “unification” or “voluntary integration,” emphasizing the peacefulness of these processes, though in fact, like other empires, Czarist and later Soviet Russia incorporated virtually all of the ethnically non-Russian territories either by military force or by diplomatic pressure.

After the Soviet Union collapsed the processes of dismantling the heritage of communist regimes occurred in many ex-USSR republics and former Soviet satellite states. In Ukraine, however, decommunization progressed slowly and happened mostly on the initiative of local authorities in the Ukrainian-speaking western regions and not in the Russian-speaking East. “This difference is determined by both objective historical and political reasons: Ukraine was much deeper and longer integrated into the Soviet Union, and there was no public consensus around anti-Soviet ideas,” historian Andriy Liubarets explains.

More significant changes began in the winter of 2013-2014, when statues of Lenin throughout Ukraine were torn during the Revolution of Dignity in protest of the Russian-leaning government. Following the Russian annexation of Crimea, the parliament adopted laws condemning the Communist and Nazi regimes and ordering local authorities to remove, dismantle, or rename objects and places constructed in their honor.

The laws covered hundreds of towns and villages, thousands of statues, dozens of thousands of streets, and countless reliefs and memorial plates throughout the country. The two biggest obstacles to decommunization were the absence of systematized information about Soviet objects and the lack of will of local political authorities. Instead the process was powered by volunteers including those behind “Decomunizatsiya. Ukrayina” which helps to gather information about the remaining Soviet heritage and to force authorities to execute the laws.

“Not all officials are ready to bid farewell to the Soviet past. Some of them want to reach a compromise: to leave a monument and just change its name or to put an explanation plate on it,” explains Oleg Slabospitsky, an activist in the decommunization movement. He had tried previously to have the monumental complex, including the workers’ statue bearing a Soviet hammer and sickle, dismantled.

“We tried to deal with it even before the Revolution of Dignity. After the Revolution, this issue became more topical. We sent our appeals to the mayor and City Council, trying to implement the dismantling process in a legal way, but received no feedback. Therefore the arch is still not included on the list for dismantling. We also communicated with the authorities unofficially, and our allied deputies of the parliament and the City Council sent appeals on their behalf,” he says.

Social media users had new ideas for the arch—more fanciful than practical. One was to paint the arch with images of missiles, so that the curve represents their trajectory. In another, the arch is symbolically destroyed by a Russian shell—as the friendship had been with the annexation of Crimea. In 2017 the arch was supposed to be temporarily decorated as a rainbow and renamed the Arch of Diversity for the upcoming Eurovision Song Contes, but the painting process was interrupted by the right-wing activists claiming that the rainbow colors were “concealed propaganda of LGBT.” Nevertheless, at night the arch was illuminated with the same pattern.

And in 2018 it became the location for “The Crack of the Friendship” artwork. Ukrainian human rights activists put a crack-like sticker on the arch. The action was performed to draw public attention to the fate of Ukrainian citizens imprisoned by Russia for political reasons. “It’s a monument to totalitarianism,” Volodymyr Kuznetsov, the author of the idea, explained. “We decided to emphasize the aspect that the friendship per se doesn’t exist.”

On May 14, 2022, while Ukrainians continued to repel the Russian invasion in the East and the capital was still occasionally shelled, Kyiv City Council decided to let the arch stand and to rename it. The towering metal parabola is now called the Arch of Freedom of the Ukrainian People and still has its “crack.” The workers’ monument is gone, and the granite stele is hidden behind metal panels awaiting dismantling. Kyiv residents are beginning to return to their homes, and the square under the arch is crowded again these warm summer days.

But for Slabospitsky these attempts to reclaim the monumental plaza are not enough. “Whatever you call it and whichever colors you light it up, people know that it’s dedicated to the friendship of Ukraine and Russia. As for me, the ideal option is to build the pantheon where the remains of Ukrainian national heroes will be kept. Otherwise, an original modern monument commemorating the Russo-Ukrainian War can be installed on this site.”

The Country That Still Considers Saddam Hussein a Hero

The dictator's face crops up on cars, playing cards, watches, and even Instagram.
ruins

From royal abode to performance-art venue, Malcha Mahal has a rich and mysterious history.
art