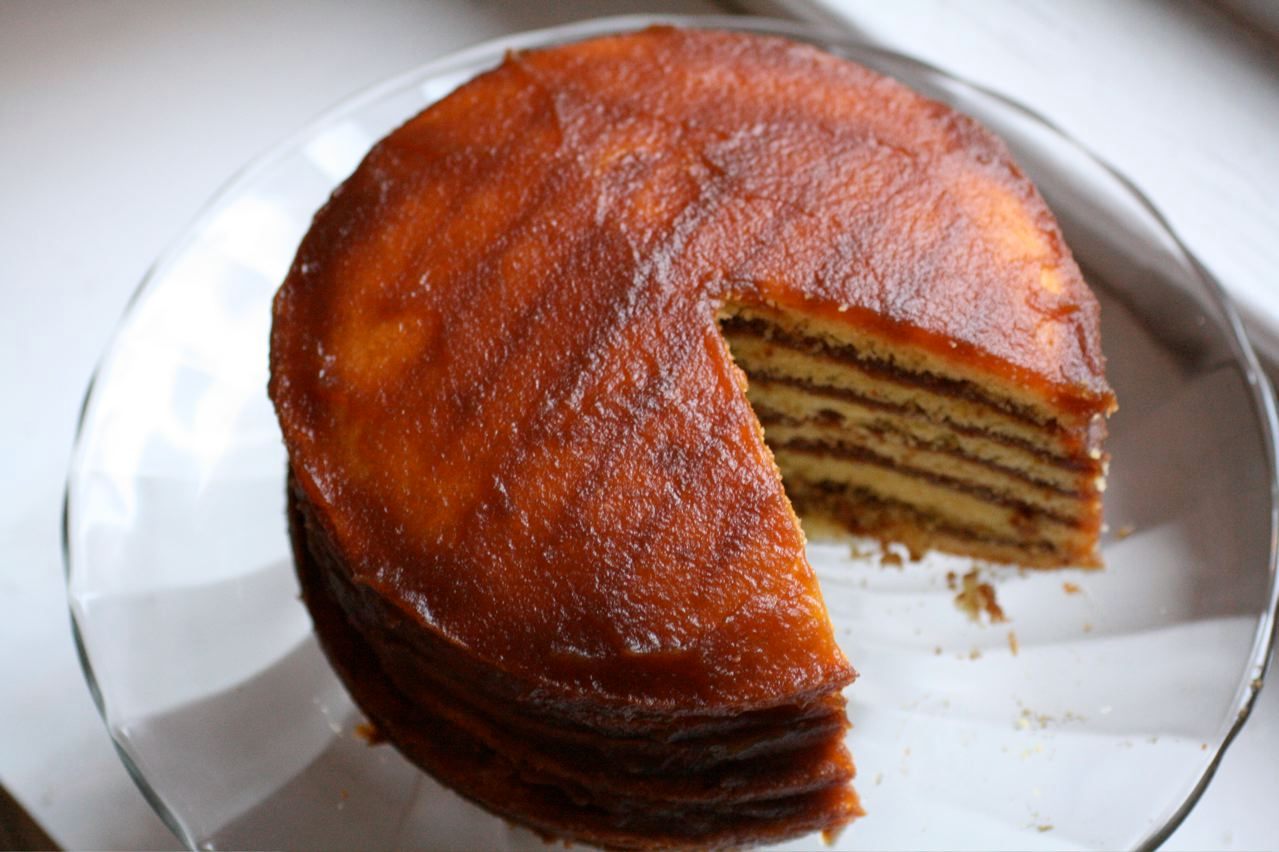 Stack cakes are a classic Appalachian treat. thebittenword/CC BY 2.0
In This Story
Destination Guide

It is difficult to imagine the Christmas season without baked goods. Holiday cookies, cakes, pies, breads, and a variety of other well-loved treats are at the heart of countless traditions. While a plate of festive indulgences is sure to inspire delight and comfort, rarely do we associate health and healing with such foods. However, in the North American region of Appalachia, it was once believed that any sweets baked on Christmas Day held the power to prevent and heal illness.

The culture of the Appalachian region, which stretches over 13 Eastern states, is particularly concentrated in West Virginia, Kentucky, Pennsylvania, Tennessee, and North Carolina. History suggests that more than 90 percent of the area’s first European settlers originated from northern England, southern Scotland, and parts of Ireland during the latter half of the 18th century. In later years, Swedish, Finnish, German, and Welsh pioneers would arrive. With these populations came cultural practices and beliefs deeply rooted in Christianity.

The mountainous, rural territory made for challenging living conditions and laborious work. With few resources available, settlers grew skilled at growing, foraging, and preserving food, since for most of the year, fresh ingredients were either unavailable or too expensive. Between malnutrition, dangerous working environments, and lack of adequate medical care, the threat of illness was ever-present.

Religion was a source of hope, and Christmastime was a respite from the ongoing hardships of daily life, which were only made more difficult by the harsh mid-winter weather. People welcomed any reason to believe they’d see easier days in the coming year. By the 19th century, an array of rituals and superstitions had come to be associated with Christmas, the majority of which were in the interest of good health and prosperity.

One was the belief that anything baked on Christmas Day carried the ability to heal and prevent illness. For this reason, some families would bake extra cakes and loaves of bread, and preserve them to be eaten throughout the coming months of the year. Like most folk beliefs, the origins of this practice are uncertain. However, history suggests that it dates back many centuries, to when “Old Christmas” was still a common day of celebration. This day, which falls on January 6, was upheld as an important holiday in Appalachian communities long after the modern calendar shifted the celebratory focus to December 25.

Some of the most common sweets prepared on Old Christmas were fruitcake, apple stack cake, mincemeat pie, and gingerbread. These recipes were brought over by the Anglo-Scottish settlers and adapted over time based on availability of ingredients. Fruitcake prepared in the traditional Appalachian way is markedly different from the neon-studded, candied loaves that appear in today’s grocery stores each season, though whether it’s any more palatable is up for debate. In Sidney Saylor Farr’s book More Than Moonshine (1983), her friend Nell Caldwell relates how her family’s fruitcake was “not your everyday traditional one … there was no money to buy such things at the store.”

The word “fruitcake” in Appalachia meant many different things, depending on the region and one’s family lineage. For many, it was an extremely dense, chewy mixture of foraged nuts, dried fruits, and preserves, which after baking was heavily soaked in whiskey, brandy, or moonshine. Some families’ fruitcakes more resembled the Scottish black bun, with a cracker-like pastry dough encasing the heavy nut and fruit mixture. “Poor man’s fruitcake” is the slightly derogatory term for apple stack cake, the quintessentially Appalachian sweet made from sorghum-sweetened, pancake-like layers spread with spiced dried apple preserves. As with most recipes in Appalachia, these treats were popularized for their use of low-cost, preservable ingredients.

Beulah Garcia, a native of West Virginia, recalls her family’s tradition of making fruitcake, which was “washed with rum or sweet cherry once a week to preserve it.” Eating a slice alongside a cup of tea with honey, she says, is especially good “for a common cold.” She adds that gingerbread and gingerbread men are “also good for your body,” due to their spices.

These beliefs aren’t entirely unfounded. The spices used in holiday recipes, such as dried ground ginger root, cinnamon, and cloves, do have medicinal properties. Ginger is known to calm nausea and digestive issues, while cinnamon is a proven antioxidant and anti-inflammatory with the ability to lower blood sugar levels. In their book Appalachian Folklore: Omens, Signs and Superstitions, Nancy Richmond and Misty Murray Walkup cite cloves as being “used to treat gout and as an antiseptic.” However, the small quantities used in baking are unlikely enough to treat any medical ailment. The various alcohols used to preserve these holiday treats could have also contributed to their presumed healing properties. Traditional Appalachian remedies cite whiskey and moonshine as curatives to a range of bodily woes, from arthritis and asthma to common colds and congestion.

Perhaps more significant than the ingredients in the baked goods was the day on which they were prepared. Numerous Christmastime folk legends centered on health and prosperity correlate with the reputed healing powers of the day. “Christmas brought all sorts of luck as long as you were looking for it,” says Marie Hatcher, a lifelong Kentucky resident. “We’d go visiting and eat cakes with our neighbors, knowing Jesus would bless us healthy that year. If we got 12 visitors to our home, we knew it’d be a good and easy year.” What Hatcher references was common practice in Appalachia on Christmas Day, where neighbors would visit each other’s homes and eat slices of cake or other sweets. A dozen visitors into one’s home—a reference to the 12 apostles—promised a year of good luck for the household.

Like most folklore, the Appalachian tradition of preserving and eating Christmas baked goods for their healing virtues remains somewhat mysterious. If nothing else, the holiday treats served to lift the spirits of those who baked and enjoyed them. When eaten on Christmas, they were a means to share feelings of hope and wellbeing with loved ones, and when preserved and eaten months later, they were a reminder of the most joyous days of the year. Even though this Appalachian belief may have dwindled in modern times, go ahead and enjoy an extra piece of cake this holiday, for luck and good health in the year ahead.

When the Christmas Plant Was a Pepper, Not a Poinsettia

Chilis were once holiday must-haves.
food