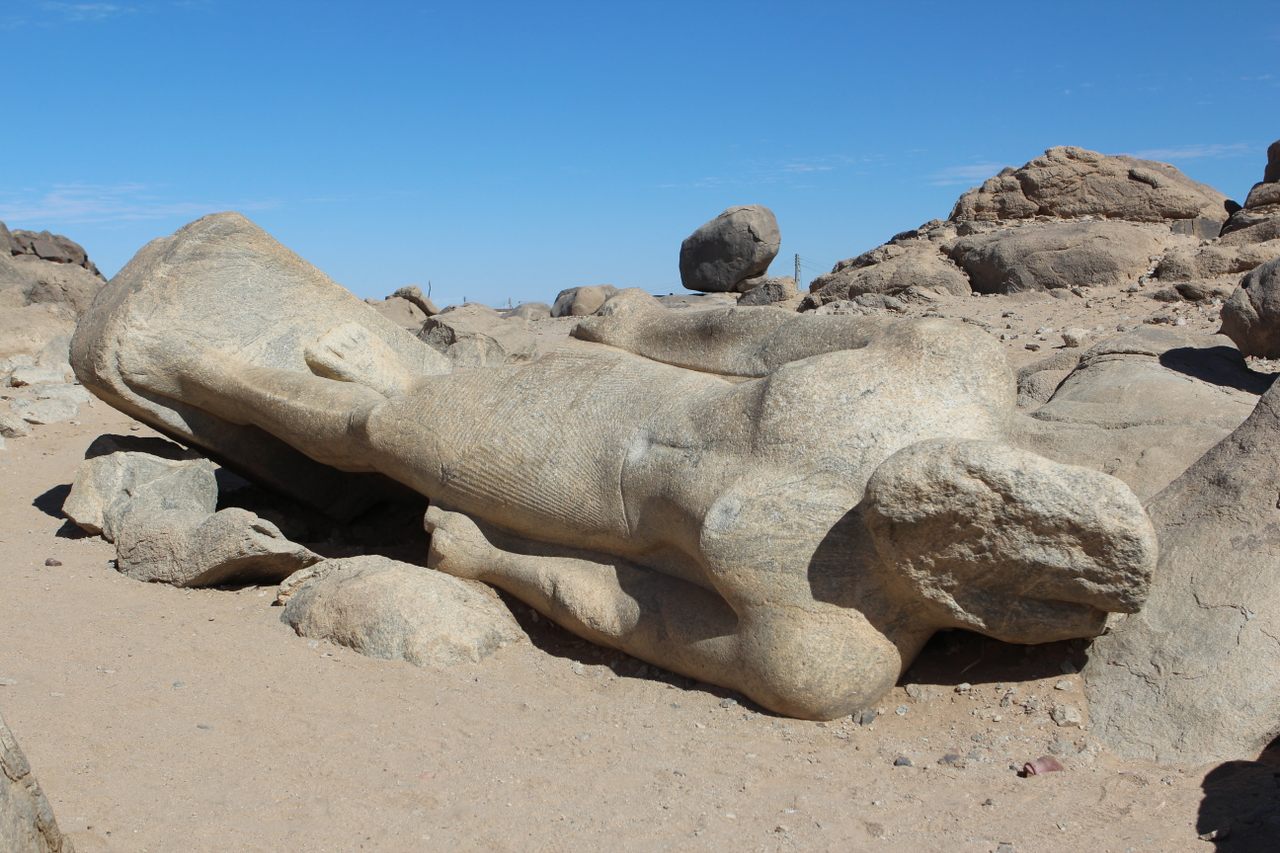 A broken statue at Tombos in Northern Sudan, where archaeologists continue to unearth evidence of a powerful civilization dating back to the third millennium B.C. Carsten ten Brink/Getty Images
In This Story
Destination Guide

Circular mounds of rocks dot the desert landscape at the archaeological site of Tombos in northern Sudan. They reveal tumuli—the underground burial tombs used at least as far back as 2500 B.C. by ancient inhabitants who called this region Kush or Nubia. As a bioarchaeologist who excavates and analyzes human skeletal remains along with their related grave goods, I’ve been working at Tombos for more than 20 years.

Discussions about ancient history in Africa are dominated by the rise of Egypt. But there were several societies that rose to great power in the Nile River Valley since the middle of the third millennium B.C., including this often overshadowed neighbor to Egypt’s south. Even though ancient Kush rivaled and, at times, conquered Egypt, there’s been a relative lack of modern attention paid to this civilization. Early 20th century research expanded scholars’ understandings of ancient Kush, but the interpretations had colonial and racist biases that often obscured this civilization’s strengths and achievements.

I’m codirector, with Stuart Tyson Smith, of the excavations at Tombos. These burials tell our archaeological team about many aspects of life and death in this place millennia ago. Just like those living along the Nile River today, ancient people dealt with various challenges including environmental changes, sociopolitical transitions and interactions with other groups. Equally important to our discoveries about the past is sharing our findings with the local community and supporting Sudanese who want to pursue archaeology careers.

The remains of the ancient inhabitants of Tombos reveal information about their physical activity, as well as infection and nutrition. Conditions such as heart disease, cancer, and the effects of hard labor all leave marks on the human body that provide insights into the epidemiology of disease in the past. They help us trace the factors that play a role in health conditions and their social context. For example, we’ve found the remains of an adult woman and child who lived with a growth disorder, which shows that people with physical differences were incorporated into society.

By analyzing the isotopes, or forms of chemical elements, incorporated into inhabitants’ teeth, we’re able to piece together where they may have lived during childhood.

As the team uncovers what lies beneath the ground, we learn about individual ancient community members. For instance, we’ve found the remains of an older woman who lived into her 60s and experienced arthritis, a younger woman whose burial included a baby, and a middle-aged woman with a basket full of whole and broken small figurines, beads, and other items. Discovering people who apparently lived different kinds of lives lets our team create a picture of who populated Tombos when it was thriving.

The tomb structures show us how people wanted to represent themselves and their families publicly after death. We can link body position and the artifacts accompanying the burials to different cultural and religious practices. One well-provisioned burial of a middle-aged man included both a bed and coffin, combining traditional Nubian and Egyptian practices. The tomb also contained bronze bowls, a decorated wooden box, a pile of amulets that were treated as magical objects and a cache of iron weapons, which demonstrate early iron use in Nubia.

We’ve found that when Egyptians ruled Nubians during the New Kingdom empire around 1200 B.C., some immigrant Egyptians and local people selected Egyptian-style pyramid and chamber tombs for their burials. At the same time, some people at Tombos also used the local tumulus tomb structure similar to earlier graves in Nubia, showing how much people varied in their choices about burial.

Our archaeological team’s ability to successfully build a picture of people from the past relies on active and close engagement with the local community. Our interactions with town residents—through archaeological work, casual conversations over tea and formal presentations of our findings—have shown us that they are proud of the region’s ancient people and wish for themselves and others to know more about them.

A recent lecture and discussion that my Sudanese colleague, Remah Abdelrahim Kabashi Ahmed, and I held for the women of Tombos showed us how curious they are about the past as well as the present. Remah, who is training in bioarchaeology, and I answered questions such as: What kind of medicine did people use then? How old was the baby at death? Why did people put a bed and jewelry in their tomb? They notice the use of beds in ancient burials that look similar to those carved in recent times. They ask if we as women find the work physically difficult.

Importantly, they tell us that they want more presentations because their male family members who work at the archaeological site with us don’t share with them what we’ve found. As a result, we’ve expanded our outreach in many ways, including by collaborating with the local schools to produce some teaching materials about archaeology, local history and Tombos site findings. We also hosted a teacher and her students on a tour of the site to see our open excavations.

We work closely with the Sudanese administrative body that oversees archaeological research, the National Corporation for Antiquities and Museums. But this is not enough. It’s important for foreign researchers to study the past in collaboration with partners from the community and Sudanese academic colleagues. These partnerships are vital steps in working together to create new knowledge about the region’s ancient history and improve upon the exclusionary and racist perspectives of earlier researchers.

Tombos team member Mohamed Faroug Ali, a Sudanese archaeologist at International University of Africa in Khartoum, led the creation of the American Sudanese Archaeological Research Center, with the goal of encouraging international research and collaboration in Sudan. We’ve run virtual lectures and provided scholarships for Sudanese students pursuing degrees in archaeology. We’re working toward developing a degree program at the International University of Africa.

Our goal is to support training Sudanese so local people—with more direct connections to the ancient civilization we’re studying—can participate in these archaeological projects at all levels. Promoting and practicing ethical research that includes the people who live in the area today is as important to the Tombos team as learning more about the lives of the ancient inhabitants.

Michele R. Buzon is a bioarchaeologist and a professor of anthropology at Purdue University

For more than a millennium, Tipasa was a symbol of cross-cultural exchange. Now the sea is coming for it.
science

At a site in Spain, archaeologists piece together the last days of Tartessos, an advanced society that vanished 2,500 years ago.
Video

3:07
Want to see fewer ads? Become a Member.
From Around the Web
Atlas Obscura Trips
Pyramids and Petroglyphs of Sudan
View This Trip
Thanks for sharing!