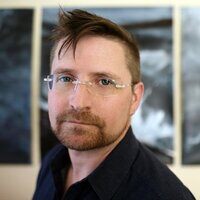 Mark Hayward is a curator, creative director and artist who has worked with numerous cultural institutions & corporations in the US, Europe and Asia. For eight years he was a curator and exhibition developer for the Museum of Science and Industry, Chicago. His clients have included NASA’s Kennedy Space Center, National Museums Liverpool, Louisiana’s Old State Capital, Marina Bay Sands Singapore, Empire State Building and Paramount Pictures Studios. He has completed commissions for the Chicago History Museum, Grand Performances and Eagle Rock Music Festival. He and his husband Charley live in Los Feliz and have three cats: Sabrina, Clementine and Flash-the-Wonder-Kat. Mark is currently working on an illustrated guidebook to LA and a field agent for Obscura Society LA.
http://ideamonkeyinc.com/

Created as a punny statement about genetic engineering this monstrous hybrid statue has become a beloved icon.
53.4096, -2.9898

This ratty natural history collection is a charming relic among a city rushing into modernity.
31.2336, 121.4828