Once referred to as “The Coney Island of the Pacific,” L.A.’s beachfront neighborhood of Venice has long been a popular tourist destination. Its colorful characters, quirky architecture, and carnivalesque atmosphere are well-known the world over. But take a moment to look past the kitsch, and you’ll discover a place where artistic ingenuity thrives more than a century after Abbot Kinney endeavored to bring a grandiose version of Venice to America. The bohemian beehive has always attracted artists and performers, and everyone is welcome to enjoy the show. 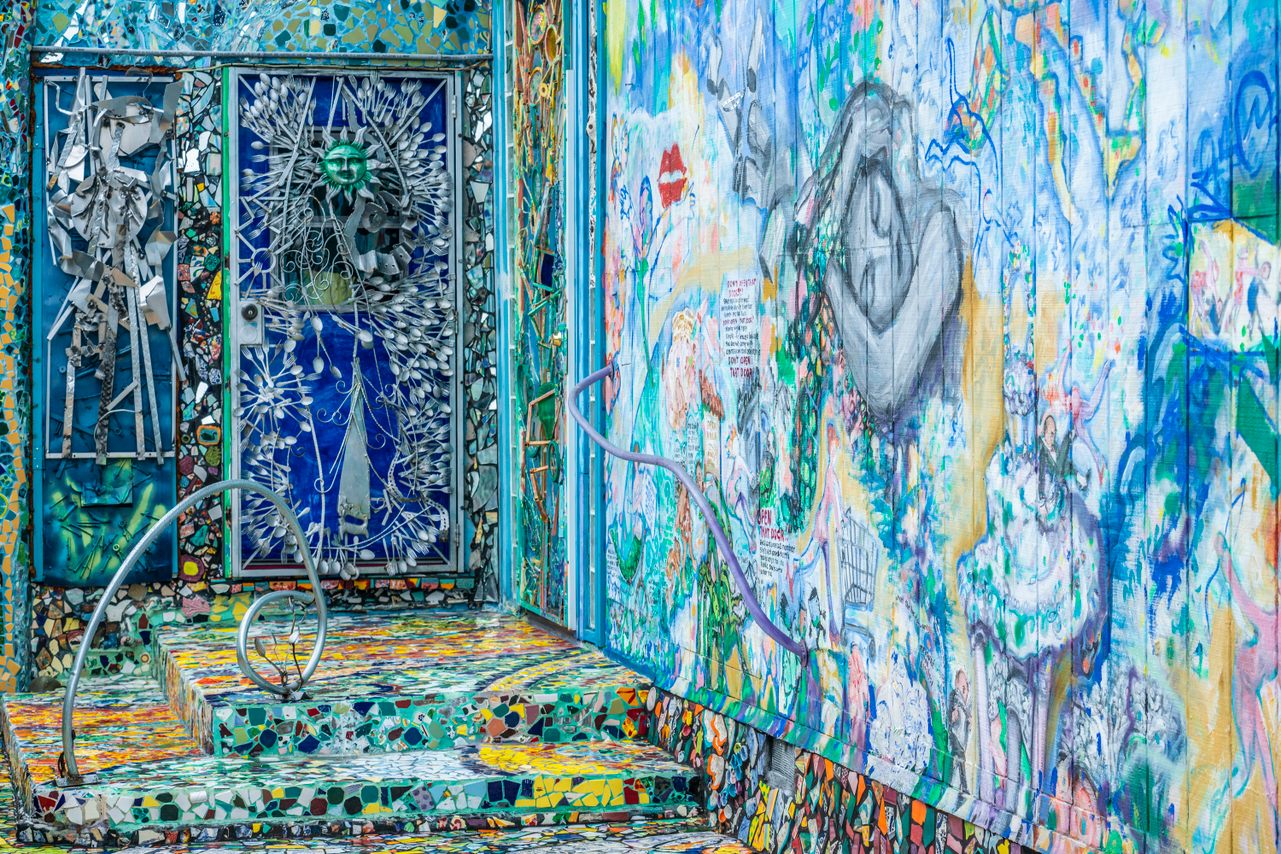 1. A Mesmerizing Home That Invites Exploration

Begin your journey about 1.5 miles away from the shore at the Mosaic Tile House, home of the artistic duo Cheri Pann and Gonzalo Duran. After purchasing what had been a small, drab stucco home in the flats of Venice in 1994, the married couple set about covering it in colorful, sparkling tiles. Every inch of the house (including its exterior and yard) is lovingly decorated with found tchotchkes and ceramic tiles handmade by Pann. Duran shatters the tiles and artistically arranges them, giving the house its mosaic-like appearance (and name).

The home is a proud testament to the whimsical energy that’s fueled this still–in–progress project. Highlights include a sculpture of a fortune cookie brimming with fortunes and a panda that peers at visitors from the front porch. Small, abstract paintings with cheeky maxims such as “Love is eternal, even if it’s only for five minutes...” are everywhere.

Once you’ve had a chance to explore every corner of the home, don’t neglect to pose for a photo in front of the home’s tiled angel wings. They’re Pann and Duran’s take on Colette Miller’s famous murals: ubiquitous wall art in Los Angeles. 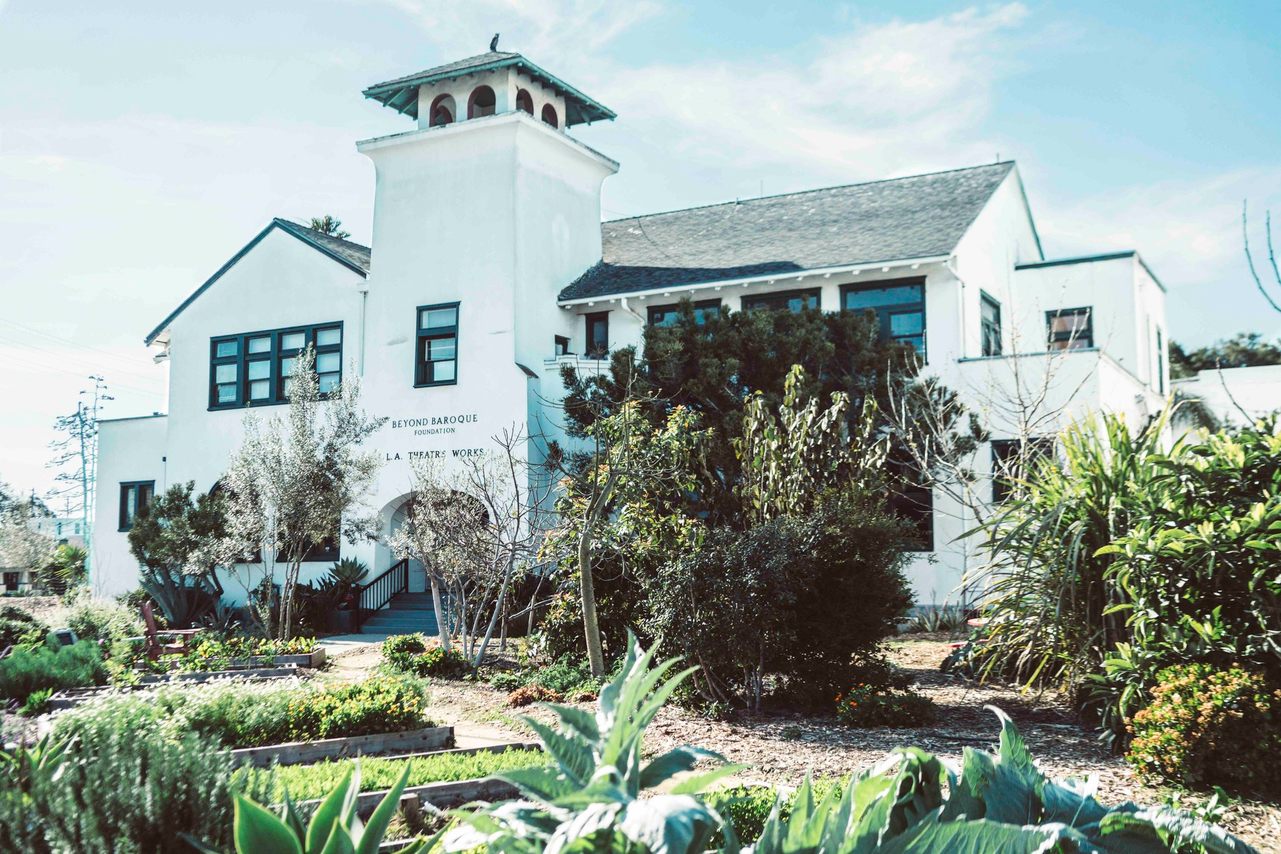 Head closer to the water for a literary pilgrimage that will enrich your understanding of Venice’s creative history. Housed in the original Venice City Hall and opened in 1968, Beyond Baroque has played a pivotal role in establishing Venice as an artistic mecca.

This independent literary arts center is dedicated to “expanding the public’s knowledge of poetry, literature, and art through cultural events and community interaction.” Wordsmiths including Patti Smith, Tom Waits, and Wanda Coleman are just a few of the center’s renowned patrons and performers.

Today, the center hosts readings, classes, art shows, and lectures. It’s the home of the Scott Wannberg Bookstore and Poetry Lounge, which holds the largest collection of new and used poetry in the city. And in the archive center, you’ll find the West Coast’s most comprehensive, independent collection of small press chapbooks and magazines.

As you make your way out, stop by the Social and Public Art Resource Center (SPARC). Once the site of the Venice division of the Los Angeles Police Department, the building SPARC is housed in was an active jail from 1929 until the late ‘70s. Today, it proclaims to have "liberated" the space for the arts through its focus on community based artistic outreach.

Founded by a high school teacher, this poetry magazine became a center for all things literary.
See More 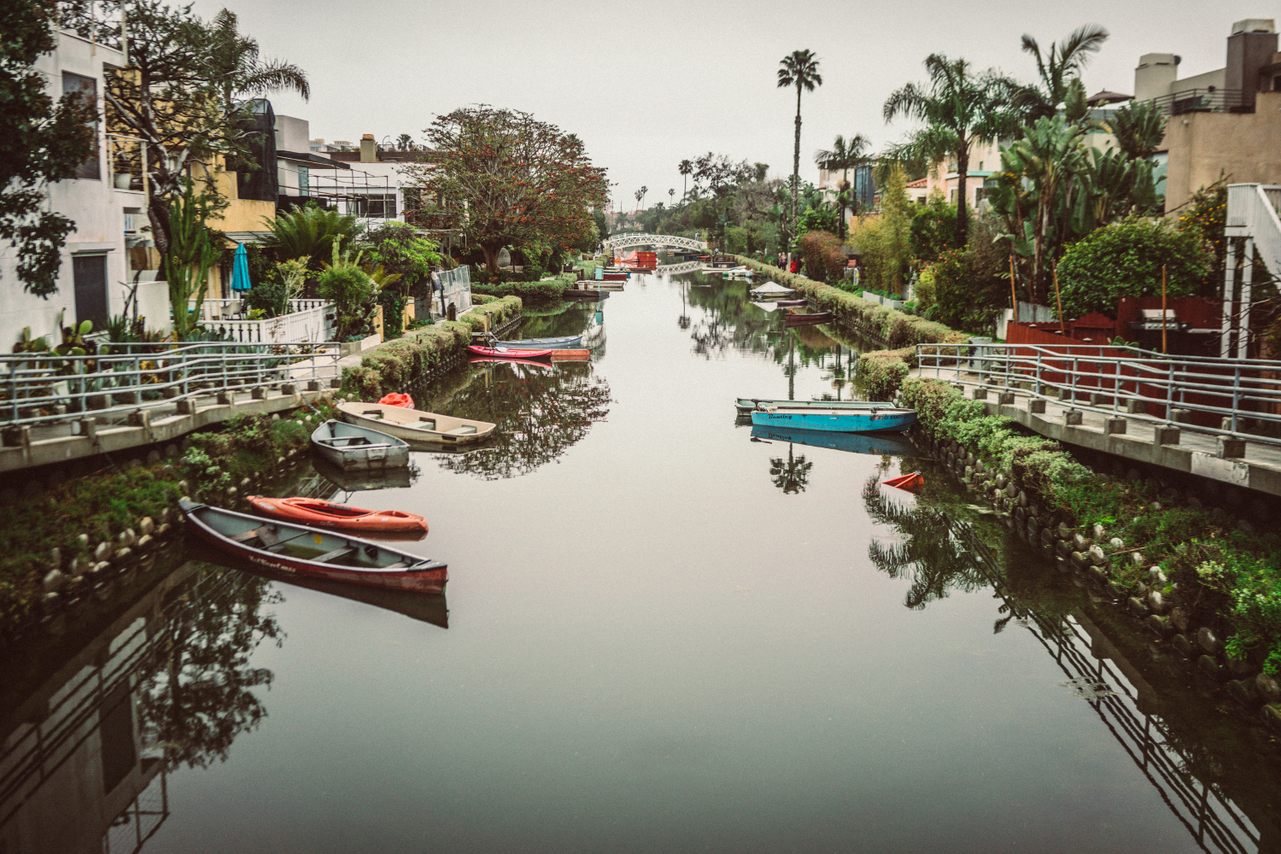 No visit to Venice is complete without a stroll through the Venice Canals. These spectacular waterways are also central to the story of Venice’s founding.

In 1905, an eccentric conservationist and developer named Abbot Kinney opened “Venice of America,” modeled after the famed city in Italy. Laid out as a recreation area, the development’s greatest draw was its boardwalk—now known as Ocean Front Walk—plus an extensive network of Venetian-style canals that were stocked with imported gondolas manned by gondoliers.

The development was a roaring success, drawing comparisons to New York City’s Coney Island. But the reputation was short-lived. Poor design led to stagnation and pollution, effectively transforming the canals into swamps. Adjacent sidewalks crumbled and the canals were filled in by the 1930s to make way for the increasingly dominant automobile. What remains today are six waterways built in 1910 for a neighborhood called the Venice Canal Subdivision. By the 1940s, these remaining canals, too, had fallen into disrepair. They were finally renovated and reopened in 1993.

As you stroll along the canals, take a moment to appreciate the latticed white bridges, the multi-million dollar Victorian and modernist beach cottages, the twinkling silver Christmas ornaments hung in the trees, and the locals rowing small red and blue canoes along the canals’ placid waters. It’s a vision of what the “Venice of America” might have been.

After starting as a whimsical tourist attraction that eventually found its way to ruin, these renovated canals offer a lush and exotic locale on the Pacific Coast.
See More 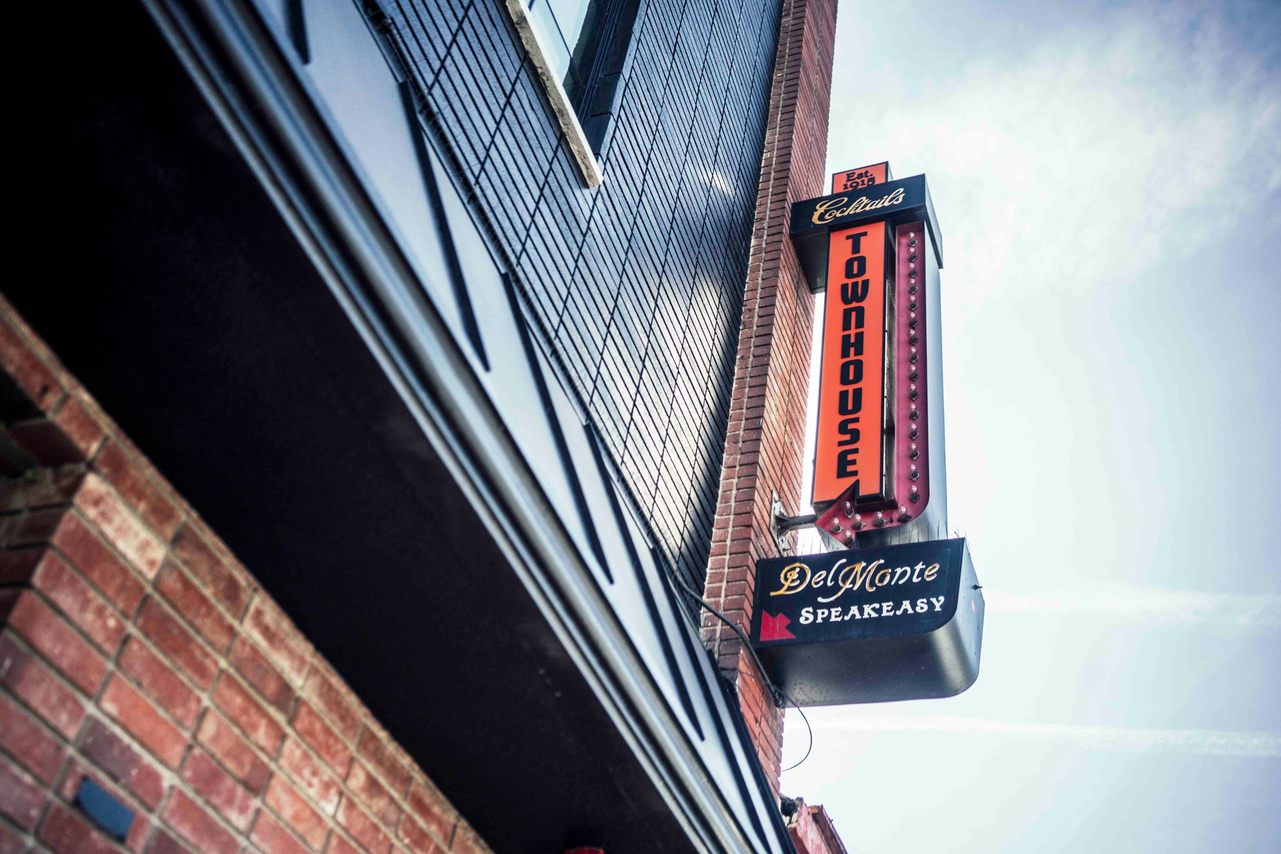 4. Townhouse and the Del Monte

As you continue toward the beach, take a break at Townhouse, a dimly lit, legendary bar in the heart of Venice. In 1915, an Italian immigrant named Cesar Menotti opened a grocery store here, filled with fresh California produce. But by the time Prohibition was enacted in 1920, he’d begun filling his basement with something else: illegal booze.

The basement speakeasy, known as the Del Monte, was only accessible via a secret elevator inside the grocery store. Remnants of Townhouse’s notorious past can still be found in the bar. Under the doormat, the words “Menotti’s Buffet” are spelled out in tile. In the basement, a bolted door leads to a hidden tunnel once used for the transportation of illegal liquor. 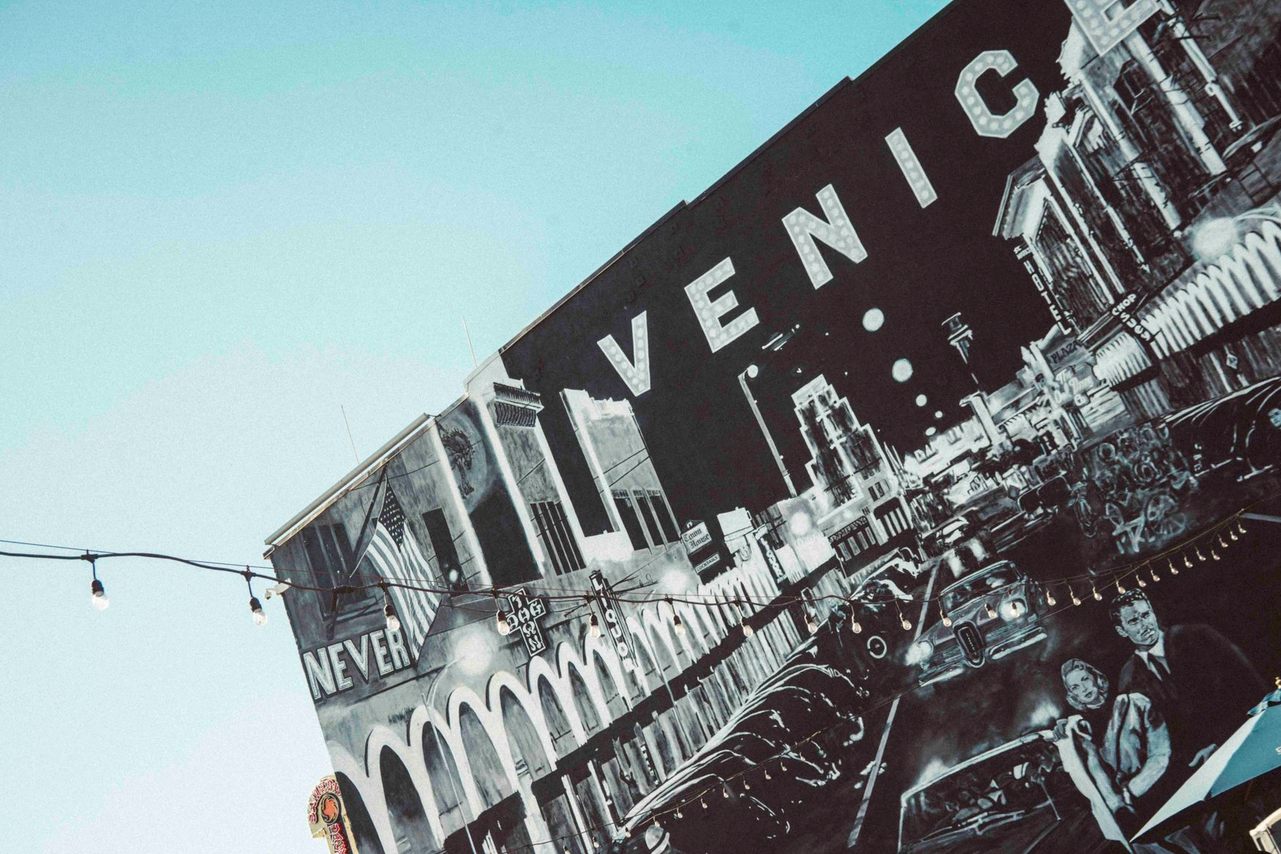 A Touch of Evil’s protagonists make their way through an artistic interpretation of Venice.
TOUCH OF VENICE

5. A Massive Mural With Hidden Details

This 102-by-50-foot mural was inspired by the 1958 film noir Touch of Evil. Though the Orson Welles-directed classic takes place in a corrupt, fictional border town, parts of it were filmed in Venice. The mural depicts its famous opening shot, filmed along Windward and Pacific avenues.

See if you can spot the  portraits of both Never and Welles hidden in the piece, plus a depiction of Townhouse’s old marquee and a sign advertising “Dogtown” in salute to Venice’s skateboarding scene. 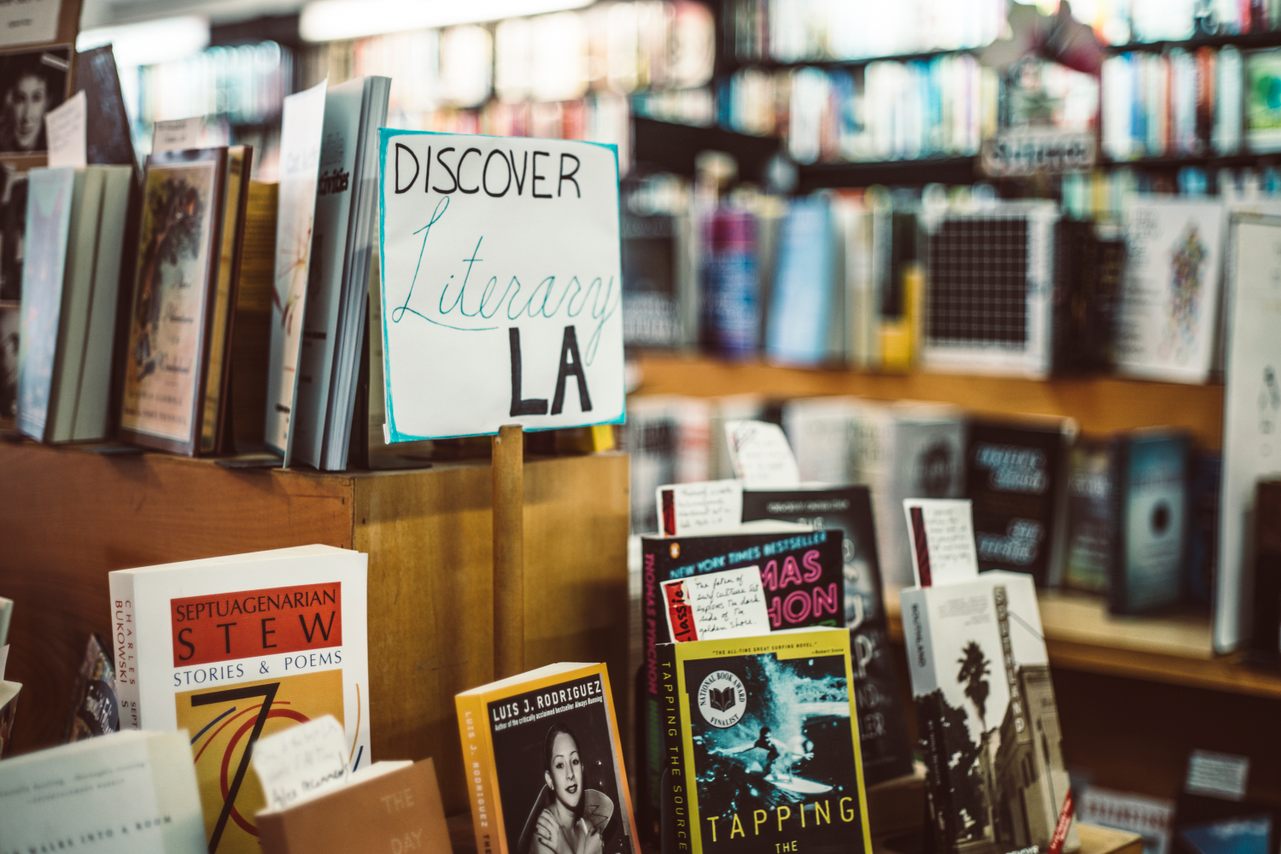 Once you arrive at Ocean Front Walk, you’ll want to take a moment to process the sensory onslaught this strip is famous for. On any given day, you’re likely to see local artists selling colorful wares, reggae performers, acrobats, and even a man who gives bad advice for the price of a dollar.

Then duck into Small World Books, a shop tucked behind the popular Sidewalk Cafe. Opened by Mary Goodfader in 1976, this 2,000-square-foot independent bookstore is a peaceful respite filled with bestsellers as well as small press gems. Unsurprisingly, given Venice’s deep ties to the Beat Generation, Small World has a large section of both new and classic poetry, as well as critical texts, zines, and anthologies. On the way out, don’t forget to pet the resident shop cat, Conan the Librarian. 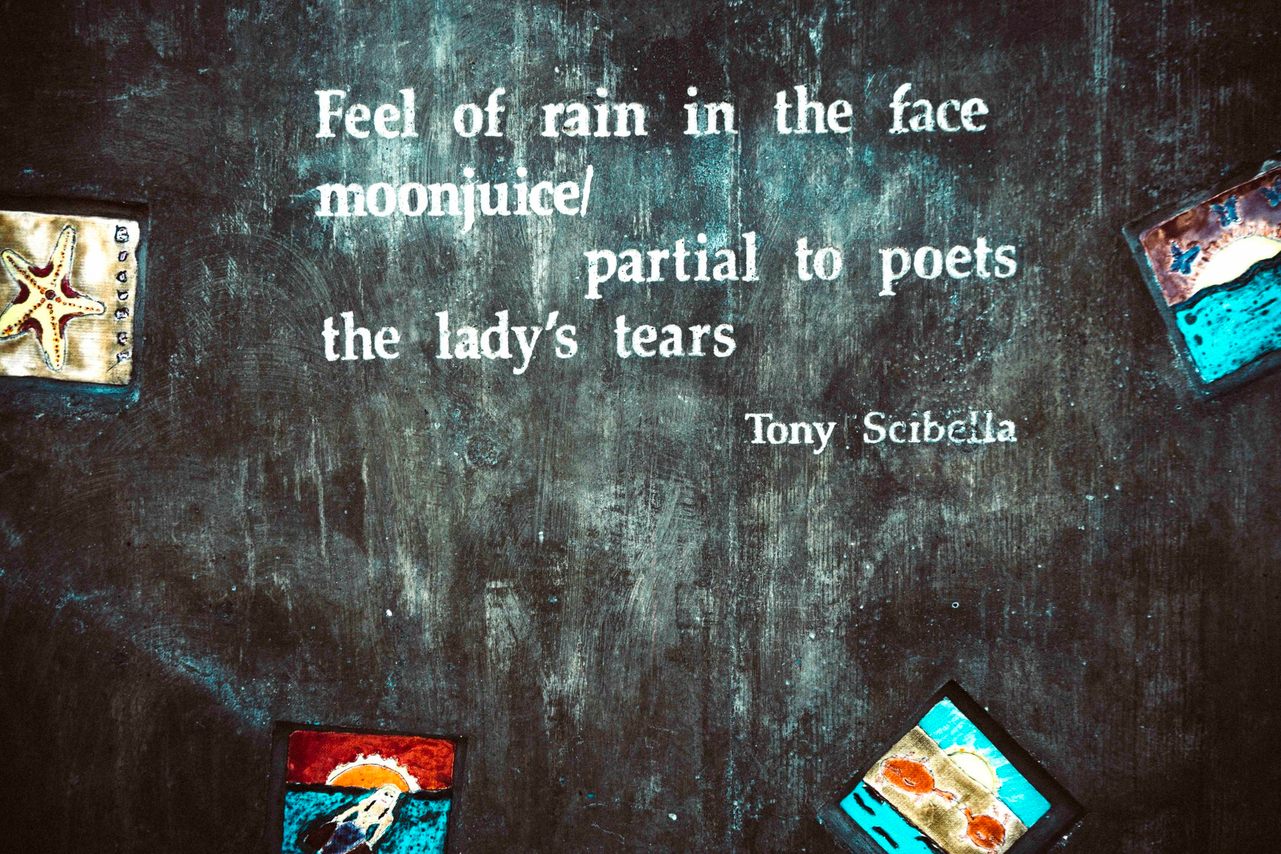 An enigmatic verse from one of Los Angeles’s most beloved poets.
HIDDEN MONUMENTS

7. An Easy-To-Miss Tribute to Venice’s Poets

Head onto the beach, turning to the left to reach the Recreation and Parks/Los Angeles Police Department substation building. There, on a grey concrete wall is an easy-to-miss, humble monument to Venice’s prized poets.

Curated by Fred Dewey (the former director of Beyond Baroque), the Venice Beach Poet’s Monument was erected in 2000. Engraved on the wall are quotes from poets, musicians, and actors who have called Venice home, including Linda Albertano, Exene Cervenka, Jim Morrison, and Viggo Mortensen. Also included is a verse by the poet Philomene Long, expressing her love for Venice’s artistic community:

Stained with the blood of poets

Beneath the breast birds

The Muse, Angel of Surprise

Poems out of pavement cracks 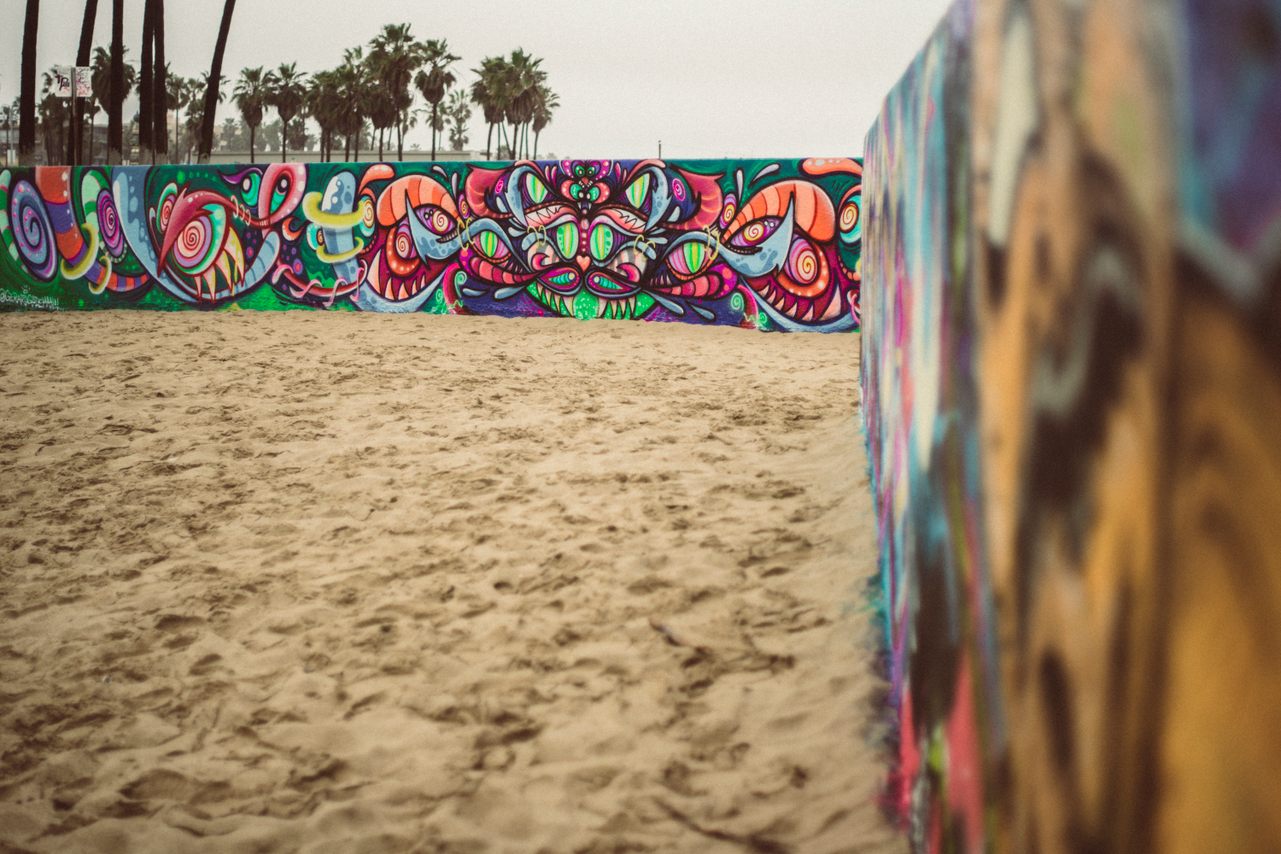 Just past the Poet’s Monument is another monument of sorts, one dedicated to free expression and artists of all kinds. Maintained by the Setting the Pace Foundation, the Venice Art Walls are concrete canvasses that anyone can paint, so long as they have a permit from the STP Foundation (download one on the official website).

On the weekends, artists and amateurs alike come here to create, painting designated sections of the wall. Spray paint mingles with the ocean breeze, and stencils and markers lay half-hidden in the sand. With ocean waves in the background and seagulls flying overhead, the Venice Art Walls are a buoyant representation of the vibrant, freethinking spirit of Venice. 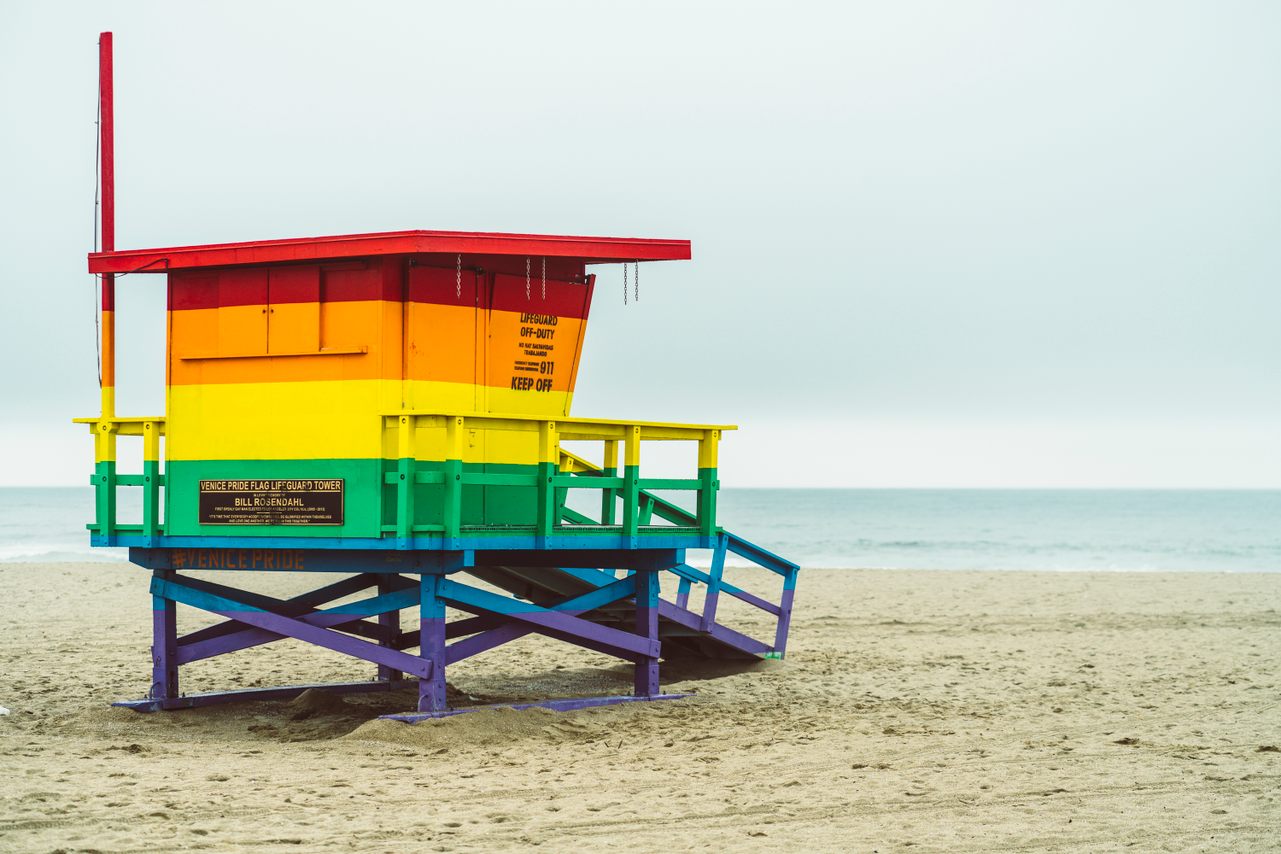 Even in Venice, the Pride Flag Lifeguard Tower is hard to miss.
ART AS ACTIVISM

9. LGBTQ+ Pride on the Beach

Take off your shoes and walk farther down the beach to a stretch of shore that’s long been a popular hangout for the local LGBTQ+ community. There you’ll find the rainbow-colored Venice Pride Flag Lifeguard Tower. Painted in June 2017 by the artists Patrick Marston and Michael Brunt, this multicolored watchtower is dedicated to Bill Rosendahl, who in 2005 became the first openly gay man elected to the Los Angeles City Council.

The distinctive paint job was actually meant to be temporary. But its popularity (no doubt aided by its Instagrammability) was such a hit that it’s now a permanent fixture on Venice Beach. Fixed to its side is a plaque featuring a quote from Rosendahl that speaks not only to the LBGTQ+ community, but to the unique, accepting attitude of Venice itself: “It’s time that everybody accept themselves, be glorified within themselves, and love one another. We’re all in this together.” 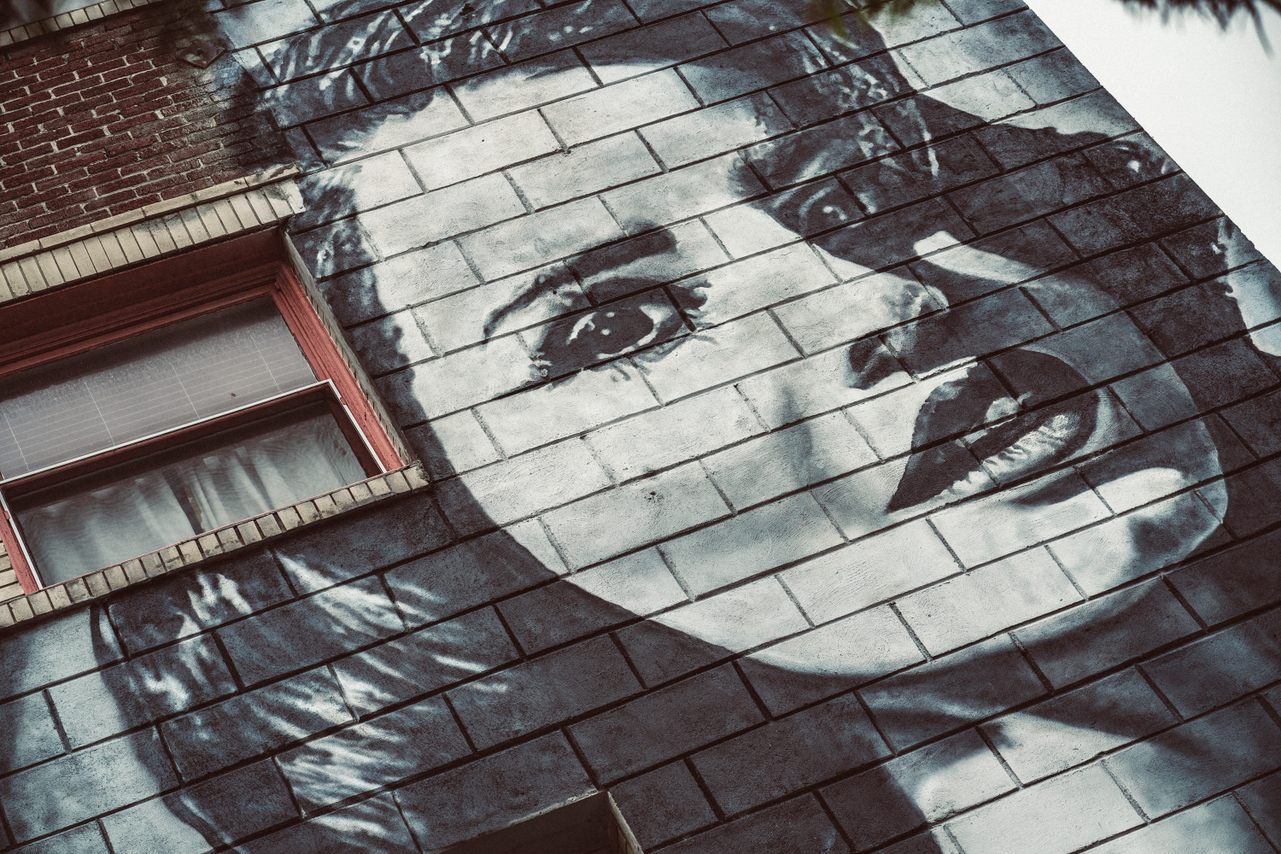 10. Famous Faces on a Historic Hotel

When you’ve had your fill of the beach, make your way over to Paloma Avenue. Here you’ll find the Ellison Suites, a historic hotel built in 1913. The building has a long and storied past, including a stint, shortly after its opening, when it was owned by the comedy legends Laurel & Hardy.

Murals by Jonas Never dominate the complex’s facade, some predictable (Jim Morrison, Marilyn Monroe) others, less so (John Hurt, Lana Del Rey). Though the choice of subjects may seem perplexing, each subject has a unique relationship with Venice. 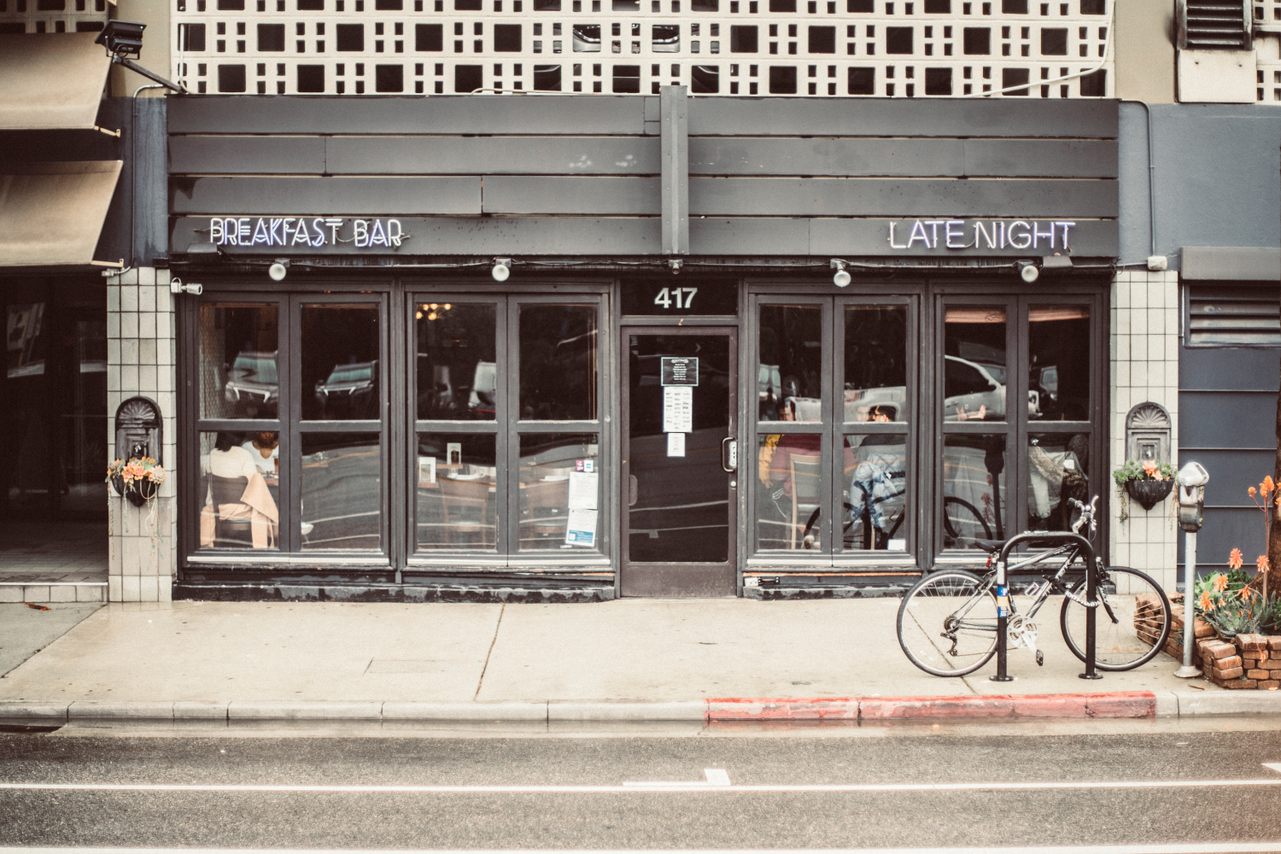 Make your way back toward the canals and end the day as a 1990s rockstar might have at Nighthawk Breakfast Bar. Dreamed up by the restaurateur and television personality Jeremy Fall, Nighthawk has the look and feel of Edward Hopper’s iconic painting Nighthawks—mid-century with a touch of noir.

The restaurant’s concept was inspired by musicians who performed on Sunset Boulevard, then ate late-night breakfasts at diners after shows. Nighthawk serves breakfast-inspired late-night eats and cocktails (think milk-based Peanut Butter Cap'n crunch and bourbon) and out-there takes on breakfast staples such as Benedict fries or candied bacon and tots.

As the day draws to a close and you once again find yourself on the beach’s outskirts, take a moment to reflect on Abbot Kinney’s idealist dream of an artistic entertainment mecca. Consider how it came to fruition over an iced Chocolate Caliente Coffee, spiked with mezcal.