Los Angeles’ Highland Park is a diverse, eclectic neighborhood that Native Americans and Latinx communities have inhabited for centuries. Celebrated for its history, art scene, ethnic diversity, and cuisine, Highland Park is filled with surprising delights that more and more people are discovering every day. Exploring the neighborhood's nooks and crannies is one of the most rewarding ways to spend a day in L.A. 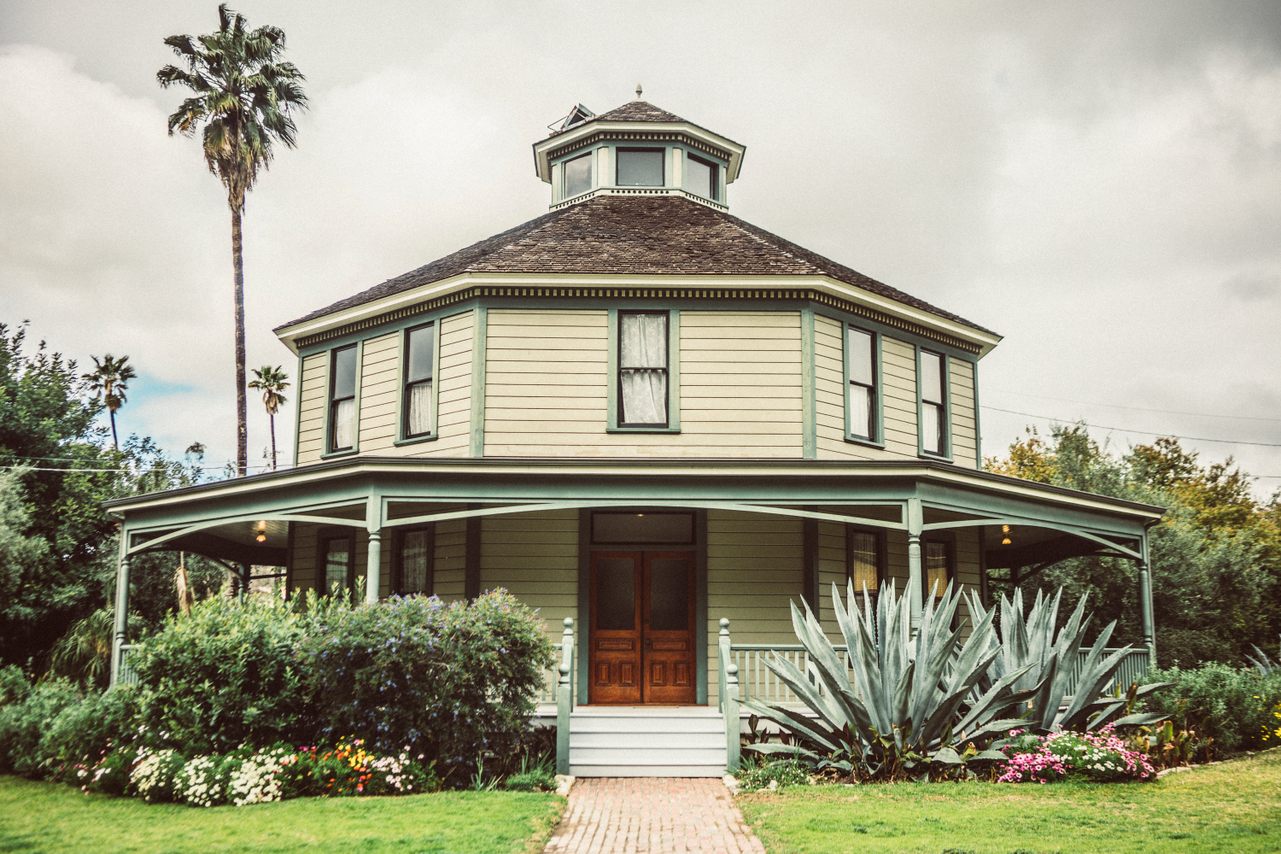 1. A Cul-de-Sac Frozen in Time

A curious sight may pass your eye as you cruise through Highland Park: stately and colorful Victorian homes clustered at the end of a cul-de-sac. They’re not part of a movie set. This is the Heritage Square Museum.

The open-air museum is comprised of eight historic buildings saved from demolition during L.A.’s population boom in the 1960s. Heritage Square Museum has effectively served as a refuge for endangered structures. The buildings that exist here were all relocated from their original locations in the city.

Highlights include the Hale House, one of Heritage Square’s oldest structures, now faithfully repainted in its original pink and green hues. The Ford House bears ornate carvings on its interior and exterior walls, the work of its former owner, John J. Ford. A well-regarded carver, his work can also be seen in the California State Capitol. The Longfellow-Hastings Octagon House is an eight-cornered structure that was part of a short-lived architectural fad. Built in 1893, it’s one of the youngest of only around 500 remaining examples of this unique architectural style. 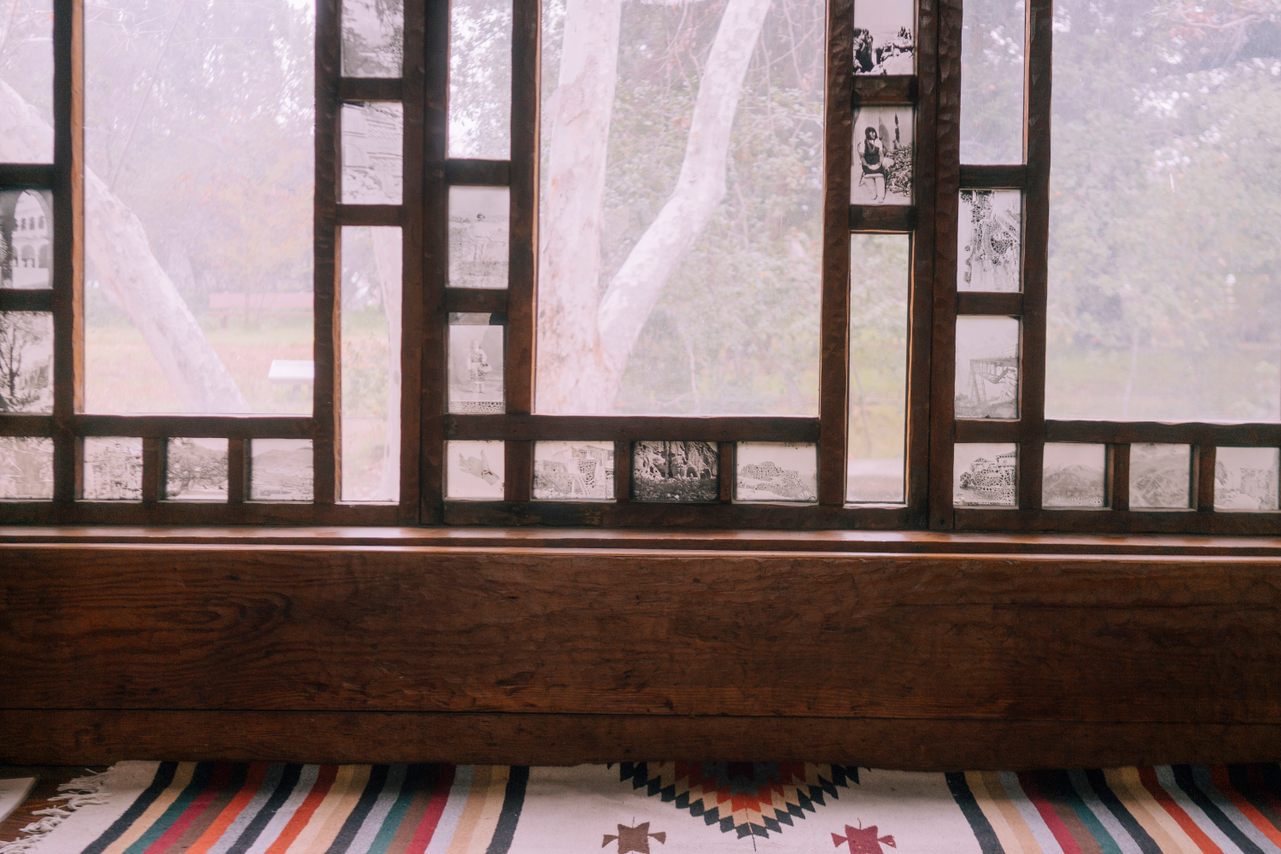 An eccentric 19th-century polymath, Charles Lummis was deeply interested in the study and preservation of the ethnographic records of the West. He built his house as an homage to Southwest history and named it "El Alisal," the term native Californians used to describe the many sycamore trees found near the Los Angeles River. More colloquially, the home is known as Lummis Castle for its fortress–like appearance.

The concrete walls that make up this pueblo-style home feature stones sourced straight from the riverbed, and a mural at the back of the home features a young Tigua girl painted from a photo Lummis took himself. The gardens, which were designed to demonstrate the possibility of a “low water garden,” feature beautiful succulents.

Inside, keep an eye out for several small but significant details. Look closely at the fireplace located in Lummis’ study to see an incredible carving featuring Native Americans engaged in a traditional fire dance. In the main room, the windows are embedded with photo positives that document Lummis’ travels in Mexico, Latin America, and the American Southwest. The design choice was truly novel: to this day, it’s only ever been replicated once (at the Riordan Mansion in Flagstaff, Arizona).

A castle that was built stone by stone by an eccentric journalist.
See More 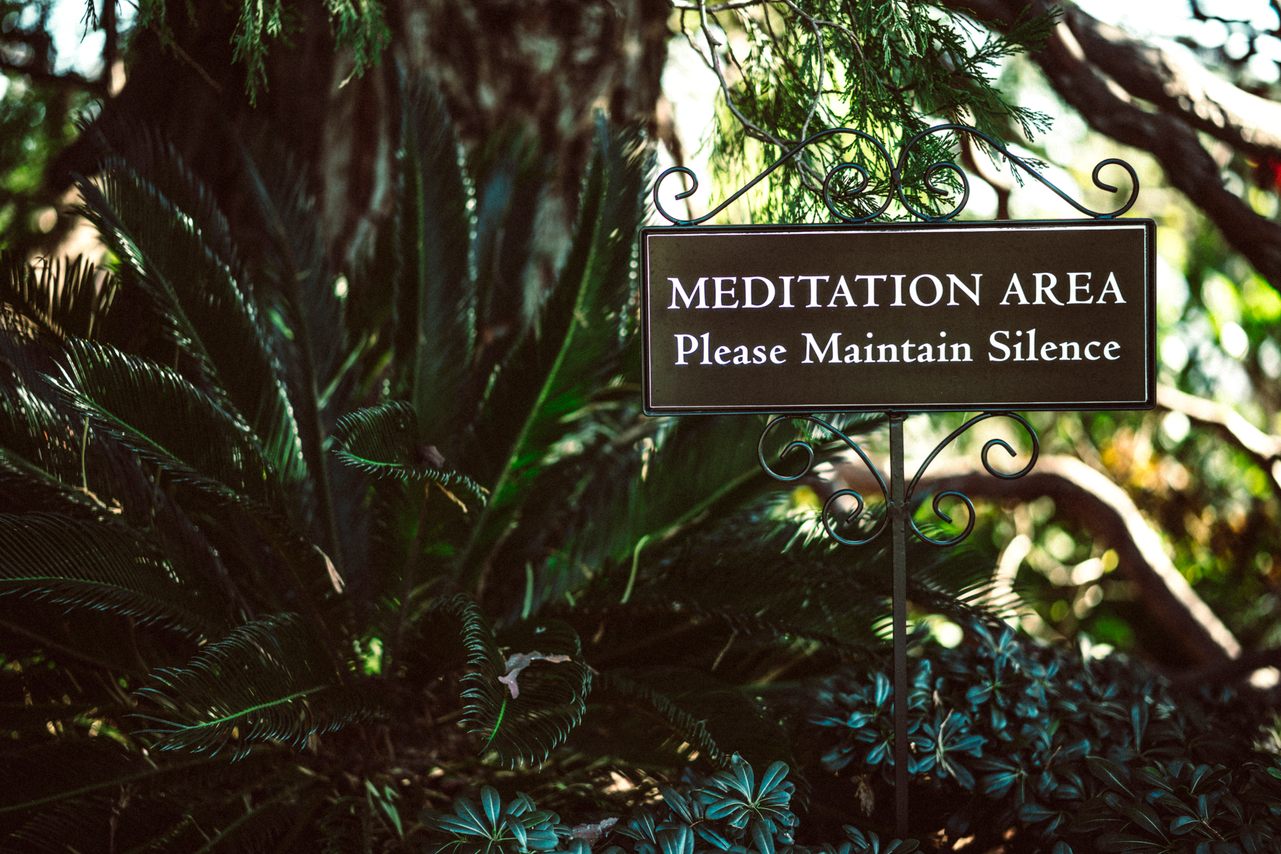 3. Breathtaking Views Atop a Spiritual Center

Perched on top of a steep, 940-foot hill overlooking Highland Park rests a white, Italianate structure that serves as the international headquarters of the Self Realization Fellowship. Founded by Paramahansa Yogananda, the spiritual organization has championed meditation and yoga since 1925, making it a pioneering force for these practices in the West.

Inside the center’s library, you’ll find various personal items of Yogananda’s, including his binoculars, lunch box, and writing case. Elsewhere on the grounds, there’s a Hindu mandir (temple) that houses a wishing well for “soul wishes,” and several imported, non-native plants such as mango trees. Perhaps the most unique aspect of this oasis is a hidden treasure in the meditation garden: an inconspicuous cluster of cacti that are in fact the first spineless cacti ever bred. They were created by the horticulturist Luther Burbank, a follower of the Fellowship faith, and were given as a gift to the organization.

If you’re up for it, the hike to the top of the gardens offers magnificent views. Yogananda was said to have chosen the spot for its vistas. He told followers that as a child, he had visions of a majestic white house atop a tall hill.

This peaceful garden is hidden on the grounds of a spiritual organization founded by a pioneer yogi.
See More 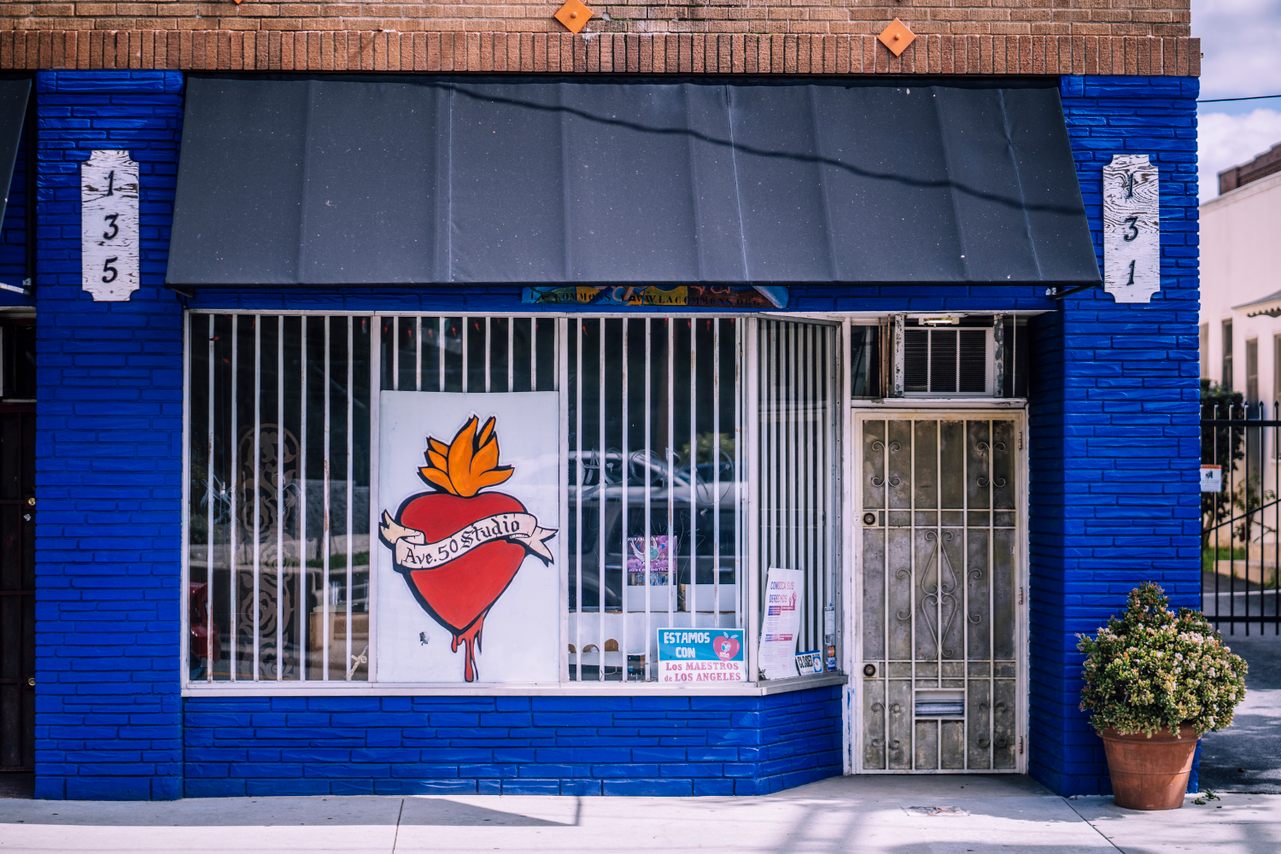 Highland Park has been home to a formidable artistic community since the early 20th century. The influence of both indigenous and Mexican-American communities is inextricable from this scene, and in the heart of it all is Avenue 50 Studio, a haven for Latinx artists from the neighborhood.

A “gallery for the people,” Avenue 50 was founded 20 years ago as a response to the lack of access local Chicano artists had to gallery spaces.

These days, owner Kathy Gallegos makes it a point to represent artists of all backgrounds, with the belief that different perspectives can help encourage a sense of community. The exhibits rotate on a monthly basis, allowing Avenue 50 to showcase many emerging creators. A stone’s throw from a Metro Gold Line stop, the Studio is accessible both literally and figuratively. 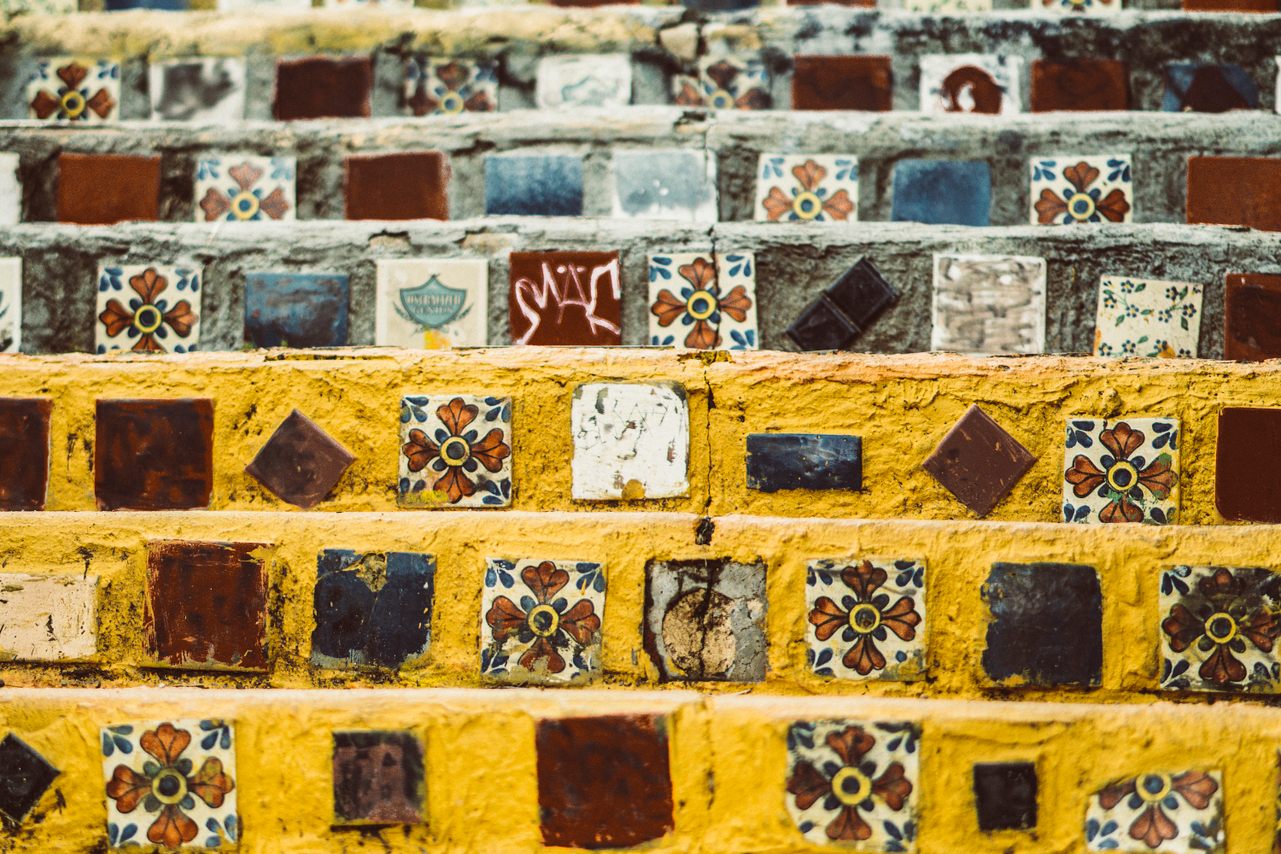 A tiled staircase in La Tierra de la Culebra.
ART OF THE OUTDOORS

Parked in the middle of a residential road, La Tierra de la Culebra (“The Land of the Serpent”) is an art park and environmental learning center. Founded in 1992, this once-forgotten lot has been repurposed into a public space for workshops, crafting, and community events. Charming details including hand-painted murals, mosaic benches, tiled steps, and native plant gardens beckon you to explore.

The park’s most visible feature is a 450-foot, raised stone serpentine path made from concrete, piqué tiles, and river rocks that were found on-site. The path unites the three terraces of the park, and leads through a cozy rock amphitheater. This serpent, the park’s namesake, symbolizes strength and regeneration. 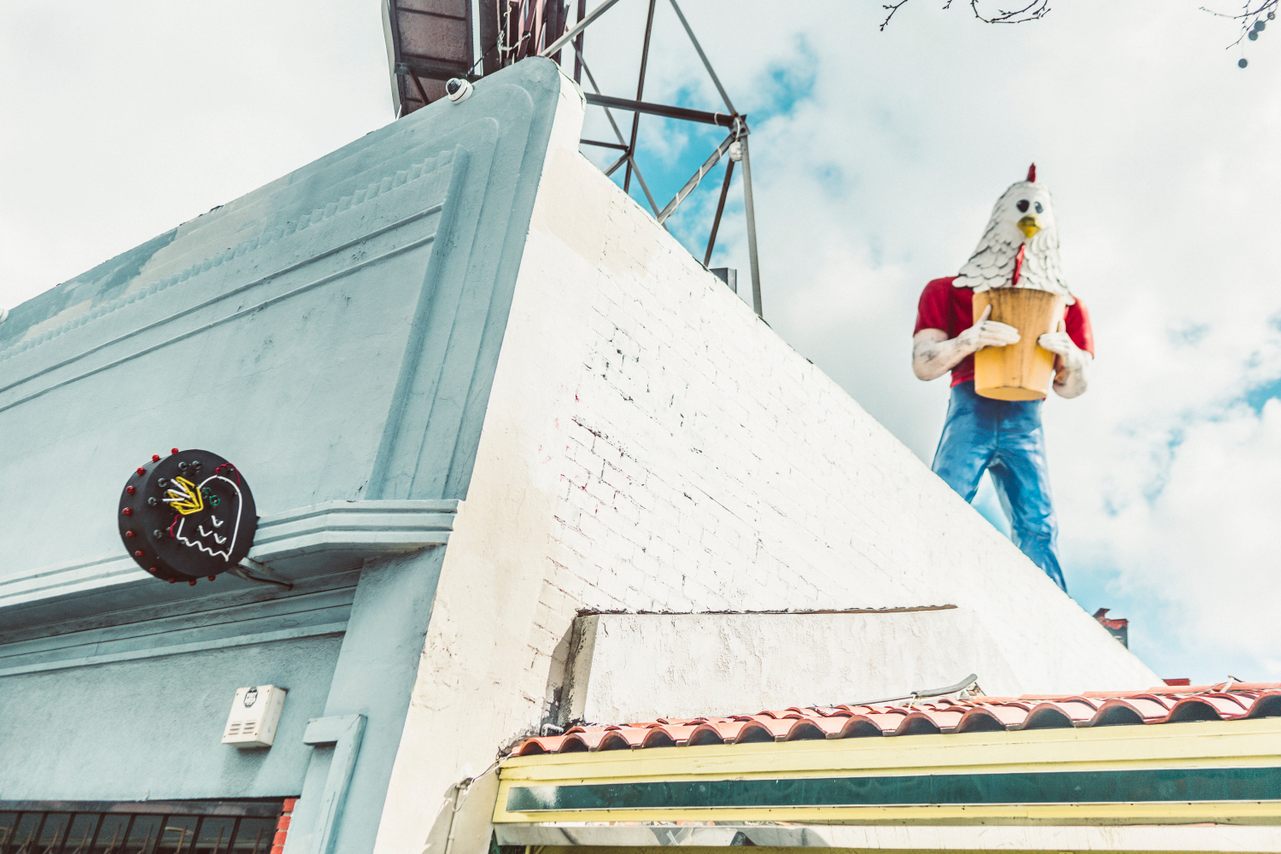 It’s easy to drive right by the “Statue of Liberty of Los Angeles” if you’re not looking up. But standing atop Future Studios, a design firm owned by Amy Inouye, is the charming and eccentric Chicken Boy. In his past life, this 22-foot-tall statue lived on top of a restaurant that served, by all accounts, unremarkable chicken. When its owner died in 1984, Inouye took it upon herself to save the bizarre-but-beloved monument, finally placing it back in the public eye in 2007, after a long sojourn in storage.

Chicken Boy is made completely of fiberglass, and his body was built by a Venice, California-based company that manufactured statues based on Paul Bunyan. Aside from replacing the axe Bunyan would have held with a basket (and adding a chicken’s head), Chicken Boy’s designers didn’t do much to modify his appearance, which explains his slightly uncanny, humanoid form.

The so-called "Statue of Liberty of Los Angeles" is on a one mutant mission to keep L.A. weird.
See More 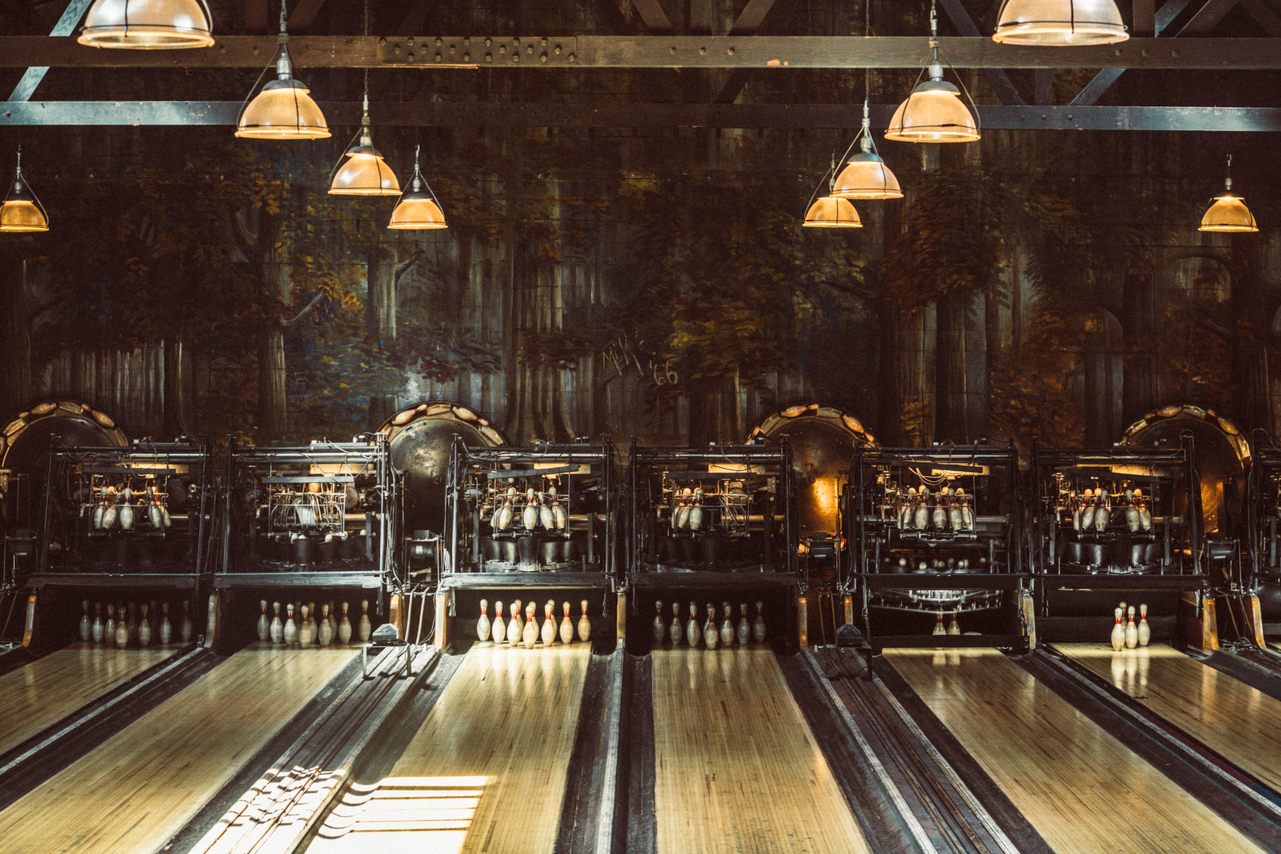 The mural behind the lanes was discovered under layers of old paint.
BOWLER’S DELIGHT

Highland Park Bowl is a veritable funhouse celebrating L.A.’s many identities, from Prohibition to present. Built in 1927, it’s the oldest operating bowling alley in Los Angeles.

Patrons boozed and bowled here in the 1920s, served by a pharmacy upstairs that wrote prescriptions for “medicinal” spirits. In the 1960s, it changed ownership and became “Mr. T’s Bowl.” Though it kept that name, by the 1980s and ‘90s the space became more popular as a dive bar and music venue.

Highland Park Bowl reopened in 2016 after a careful restoration. The original pin machines were repaired and put back in use. Bowling league banners from the 1920s now line the walls. Behind the lanes, a large but subtle mural depicts a verdant forest and the nearby Arroyo Seco. The mural (along with vintage, unopened liquor bottles from the 1970s) are just a few of the treasures that the current owners found during their renovation. 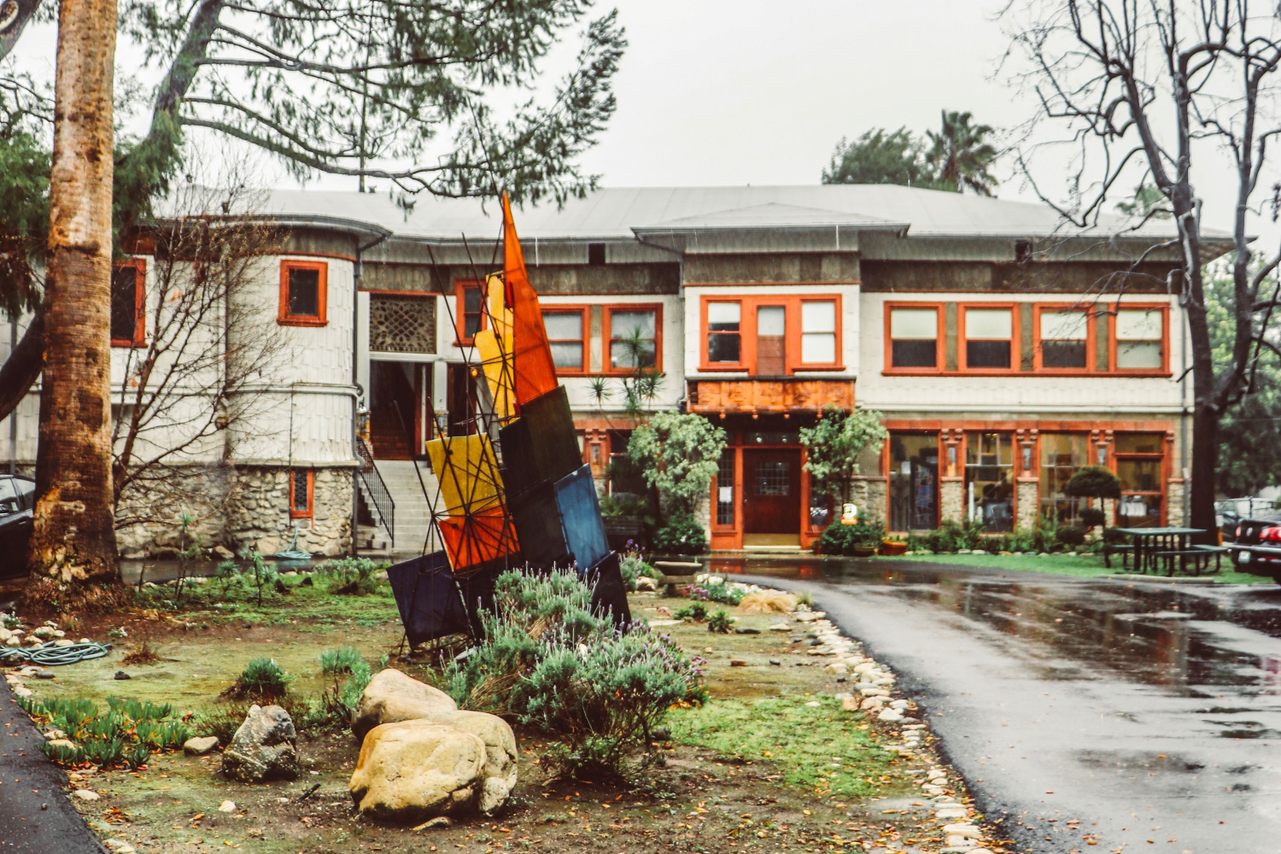 8. A Contemporary Workshop With a Storied History

Founded by William Lees Judson more than a century ago, Judson Studios is L.A.'s oldest fine arts glass studio. As you enter the historic building and active glass-making facility, be sure to look up: above the front door, there’s an original, hand-crafted carving of the logo representing the Arroyo Guild of Craftsmen, a group of influential artists associated with the Arts and Crafts Movement.

The structure that remains today was built in 1911 (the original home of Judson Studios, built in 1897, was destroyed in a fire). Both served as the first campuses for the USC College of Fine Arts. Judson himself was dean, and taught there until 1928. Today’s upstairs offices were once dorm rooms, and the ground-floor studio area is where classes were held. Hovering over contemporary works in progress are hand-painted quotes from this era that were meant to inspire Judson’s students.

The handiwork of Judson Studios can still be seen all over Southern California, at places such as the Altadena Rose Mausoleum and Inglewood Park Cemetery, and inside famous residences such as Frank Lloyd Wright’s Hollyhock and Ennis houses. For a more modern example of the studio’s work, check out the geometric window panes inside the restaurant at the Ace Hotel downtown. 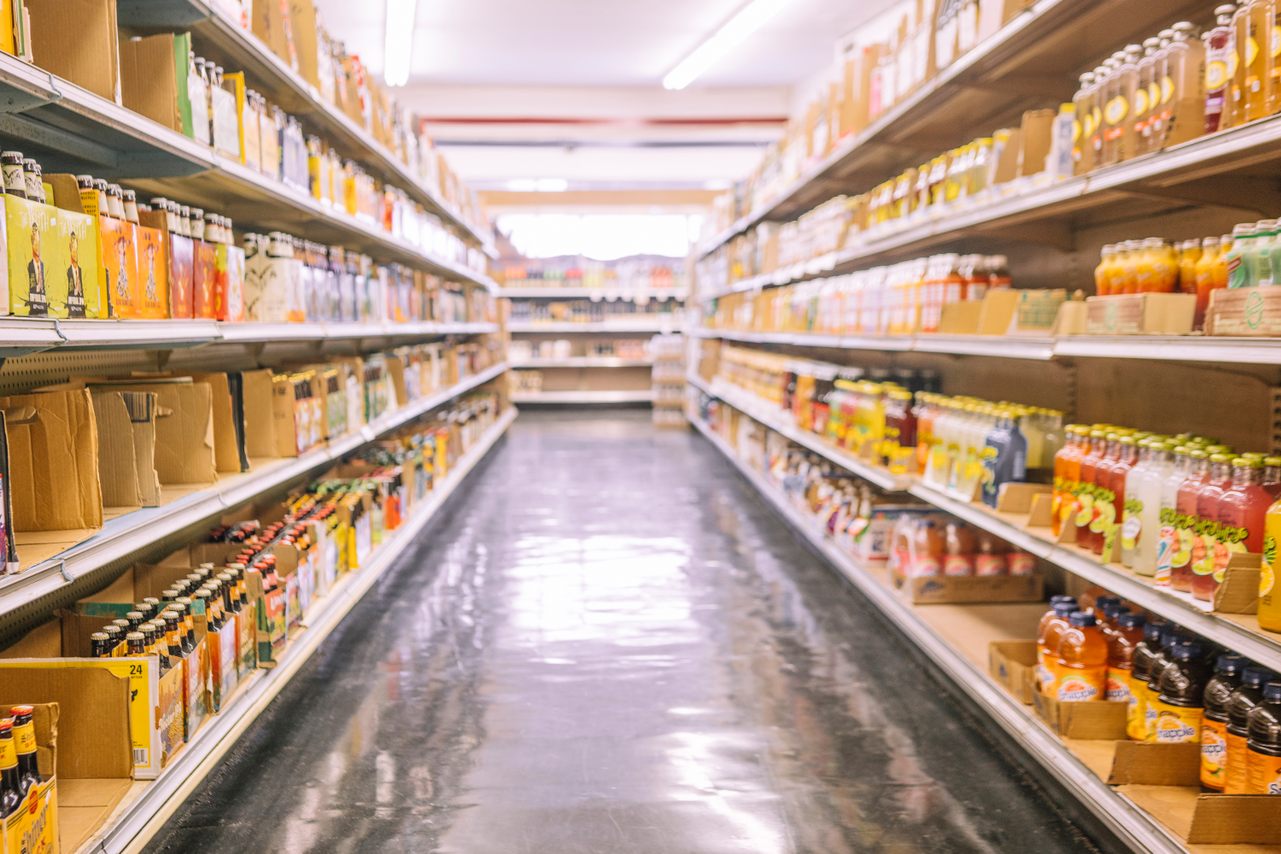 By now, you could probably use a cold beverage. Stop by Galco’s Soda Pop Stop, a grocery store that specializes in vintage sodas. Though it bills itself as an “old world grocery,” the shop possesses a kitschy ambience that calls to mind the mid-century. This family owned-and-operated store has been in business for over 100 years, and in its current location since 1955.

More than 750 soda flavors from all over the world are available at Galco’s, many of which are vintage craft sodas still in their original glass bottles. Top sellers include Moxie, a rare find outside of New England, and D & G Jamaican Pineapple Soda, an import that's currently only available via waitlist on the website. No matter your soda craving, if you’re in Highland Park, you’ll be able to find it at Galco’s.

Shop selling 500 flavors of soda has something for everyone.
See More 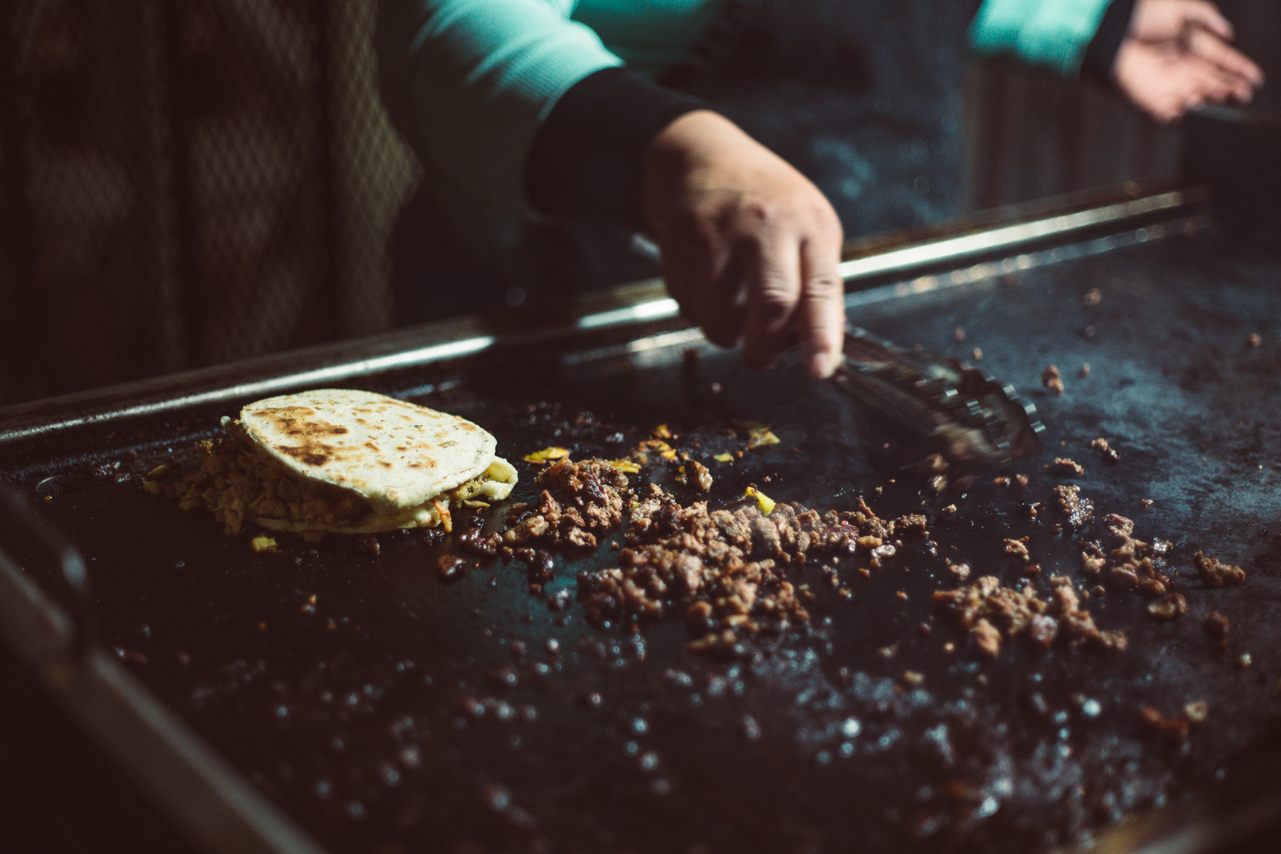 Tacos made to order.
AUTHENTIC EATS

10. The Best Tacos in Highland Park

As the night falls, treat your taste buds with Mexican cuisine that’s both delicious and unique. Only open after dusk, Dos Mujeres serves up the best tacos in Highland Park, if not all of Northeastern Los Angeles.

It’s all about the tortillas, which are handmade on the spot. Dos Mujeres is especially known for its al pastor tacos, as well as its mulitas (which are like mini quesadillas, but made with thicker corn tortillas). If there’s one meal that can sum up Highland Park’s flavor profile, it’s freshly made-to-order Mexican food, and there’s no better place to get it than Dos Mujeres. Don’t be intimidated by the line that often snakes around the block. After you’ve had a bite of your taco or mulita, you won’t regret the wait.

Dos Mujeres is a fitting way to end your journey through Highland Park. Once considered an L.A. suburb, the neighborhood has blossomed into a community with its own culture, shaped by L.A.’s original denizens: the Latinx community that have long called the neighborhood home, and the artists and craftspeople inspired by their environs.

Open in Google Maps
Photo Credits: Eric Berry (A view of L.A. from the top of Highland Park.)