If you thought Pensacola, Florida—with its powder-white sand beaches, near-perfect weather, and fresh seafood—was just a place to soak up the sun, think again. In fact, the city and beach of the same name is the site of the first European settlement in the continental United States. Established by Spanish explorer Tristán de Luna in 1559, it was christened Panzacola, a name of Native American origin and the precursor to the city’s modern name. The destination is also the birthplace of U.S. naval aviation and is still home to a naval air station and the thousands of service members stationed there, as well as the Blue Angels, the flight squadron famous for their death-defying fighter plane stunts. This delightful coastal city is an ideal, if somewhat quirky, blend of historical sites (on land and underwater) and activities to get your adrenaline flowing.

This coastal city is a popular backdrop for history buffs to explore the area's notable sites on land and underwater. 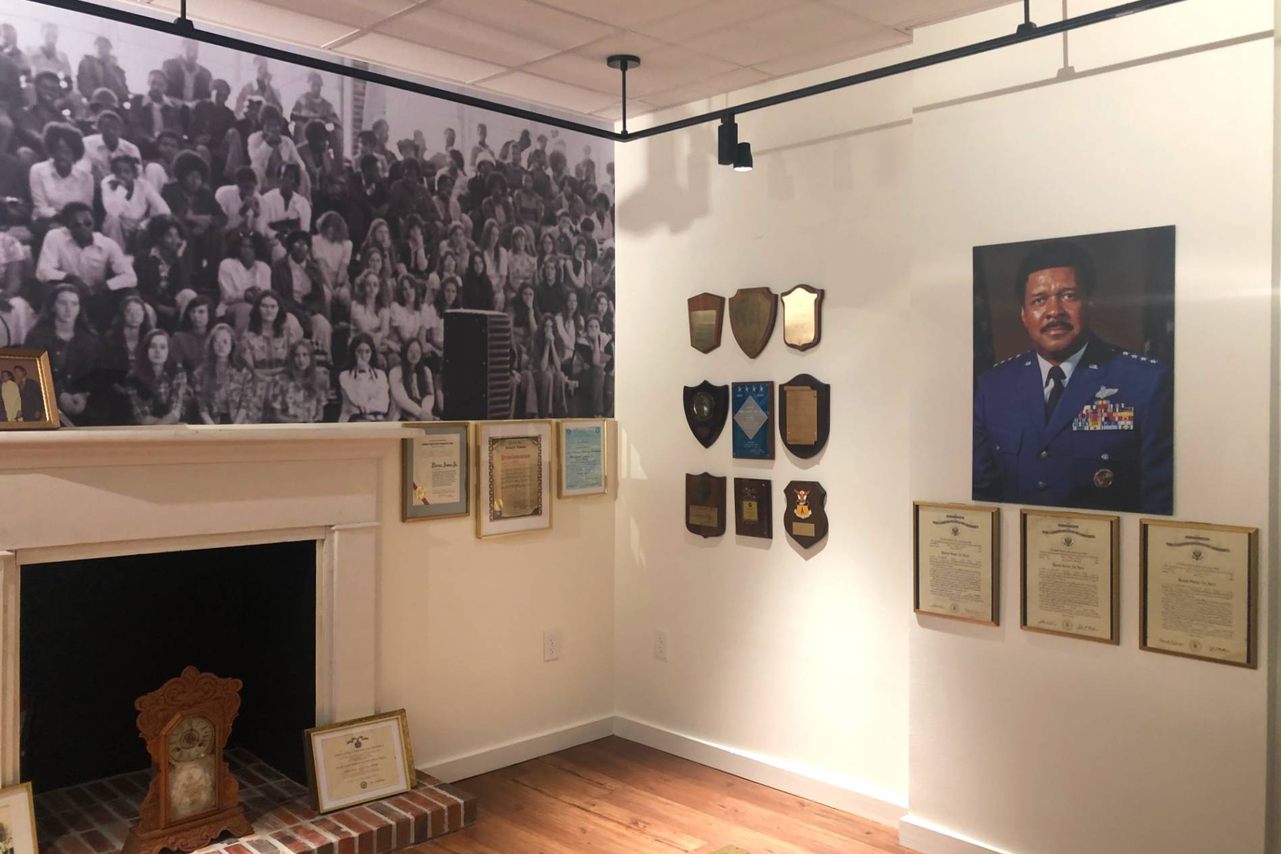 This newly opened museum in his honor features more than 20 of James’ prestigious awards and medals. Jennifer Franklin
FIRST-RATE FIGHTER

When Daniel “Chappie” James Jr. was born in Pensacola in 1920, there were no African Americans who had ever held the rank of four-star general in the U.S. armed forces. His hard work and perseverance changed all that. After attending the Tuskegee Institute, instructing other pilots during WWII, and flying dangerous combat missions during both the Korean and Vietnam wars, he reached the rank in 1975. This newly opened museum in his honor features more than 20 of James’ prestigious awards and medals, his flight suit, and a replica of the tiny school room where his mother, Lillie, taught James and other local children. 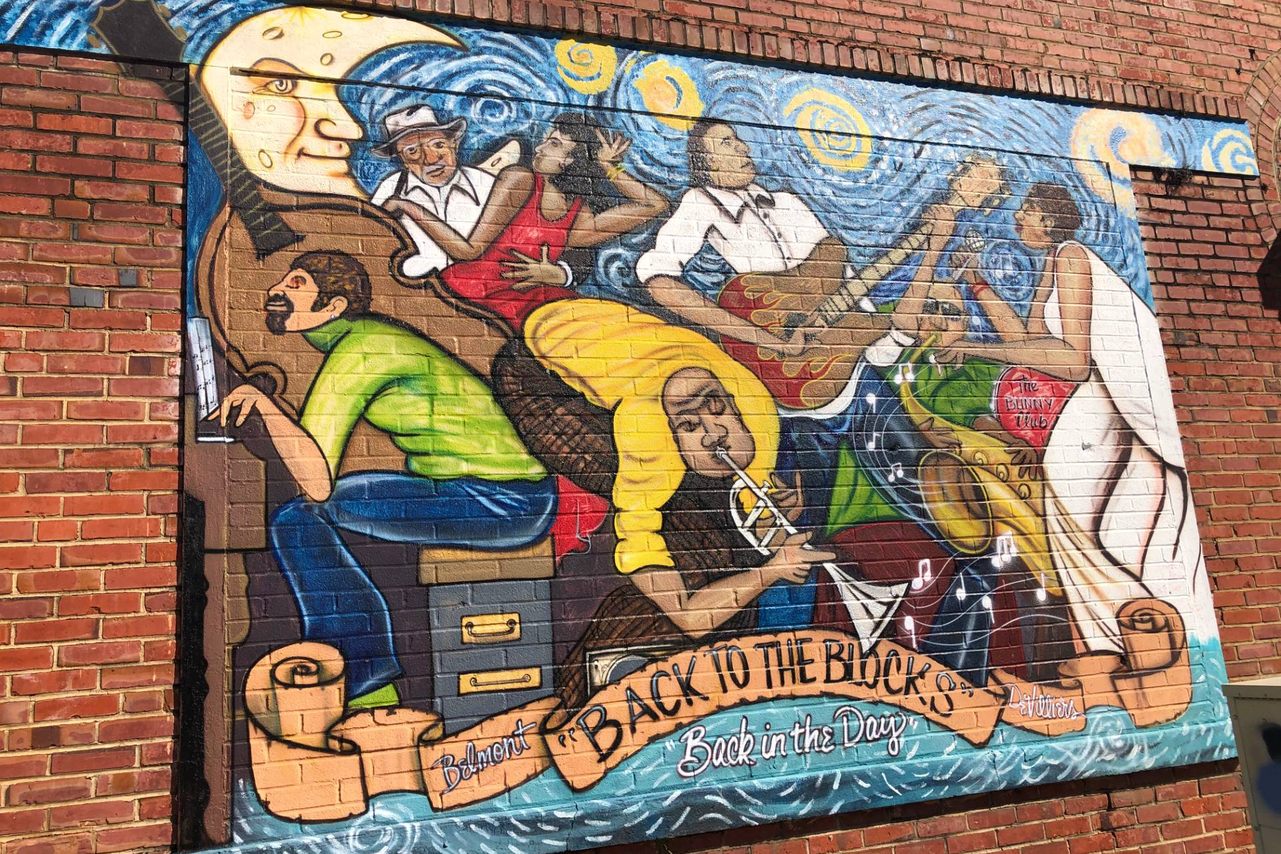 Pensacola’s historically black neighborhood, known locally as “The Blocks,” has a rich heritage. Jennifer Franklin
ALL THAT JAZZ

Pensacola’s historically black neighborhood, known locally as “The Blocks,” has a rich heritage. In fact, Pensacola was among the first cities to introduce black singers on the stage, promoting acts like Georgia’s Ma Rainey in vaudeville shows at the Belmont Theatre. Another local venue, Abe’s 506 Club, hosted African American musical legends including Aretha Franklin, Ray Charles, B.B. King, Fats Domino, and Tina Turner. Though the Belmont stage filled with music for the final time in 1981, its influence continues to be felt and local artist Carter J. Gaston immortalizes some of its performers in a modern mural. After taking in the mural, stop for fried chicken, collard greens, and occasional live jazz at Five Sisters Blues Cafe, housed in the historic 1911 Belmont-DeVilliers Building. 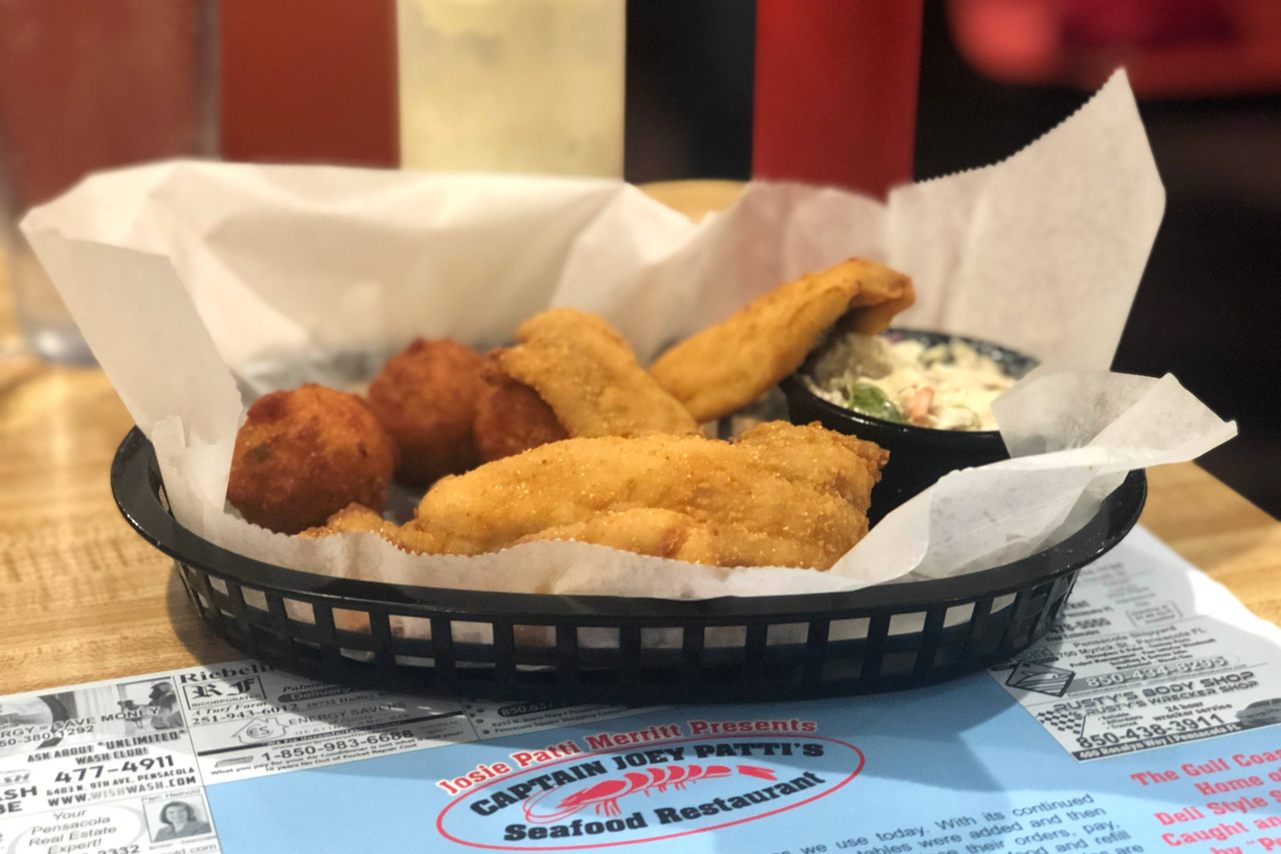 To order like a local, choose a meal of fried mullet fillets, tangy coleslaw, and still-steaming hush puppies. Jennifer Franklin
A PARTY FOR YOUR MOUTH

This locally caught fish might share the same name as the maligned business-in-the-front-party-in-the-back hairstyle popularized in the 1990s (thanks, Beastie Boys!), but mullet is popular with seafood lovers. Fried or smoked, mullet is an affordable choice at long-standing joints like Captain Joey Patti’s Seafood Restaurant & Deli. Opened in 1988 in a former fish market, the low-key dining room stays busy with a steady stream of locals and visitors ordering all manner of delicacies of the deep. To order like a local, choose a meal of fried mullet fillets, tangy coleslaw, and still-steaming hush puppies. While most Gulf-adjacent states consider mullet to be good only for bait, Pensacoleans know that the pristine water off the coast produces a nutty, oily white-fleshed fish that’s fit for a feast. Feeling adventurous? Head to the fish market and shop of the same name just down the street and pick up fresh mullet or alligator (along with recipe cards) to cook at home. 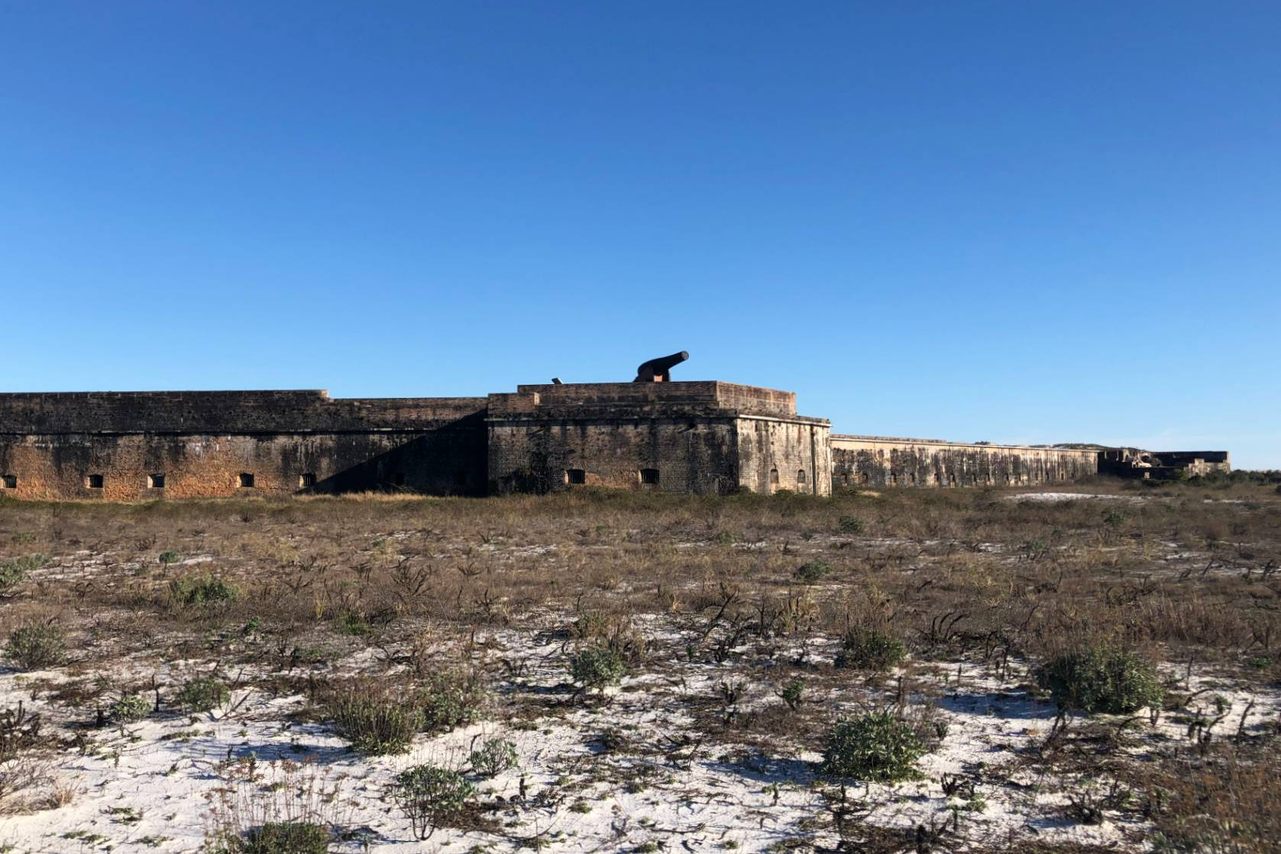 Make the short, scenic trek to beautiful Santa Rosa Island to discover the military fort named for Revolutionary War hero Andrew Pickens. The pentagonal masonry fort, commissioned in 1825 as the largest of four area forts to protect the bay’s naval yard, still stands proudly, complete with age-old cannons. During the Civil War, Union soldiers exchanged gunfire with some Confederate-held forts in the area, before the rebels abandoned Pensacola in favor of supporting troops in Tennessee. Fort Pickens’ rudimentary living conditions also briefly held the great Apache leader Geronimo and some of his warriors in the mid-1880s. Today, the hauntingly beautiful fort is a popular backdrop for history buffs and campers who wish to enjoy the coastal wilderness. For people interested in exploring the Gulf Islands National Seashore, Fort Pickens is a convenient stop on the Pensacola Bay Cruises ferry.

One of the only Florida forts to remain in the hands of the Union all through the Civil War still stands as a historic stronghold.
See More 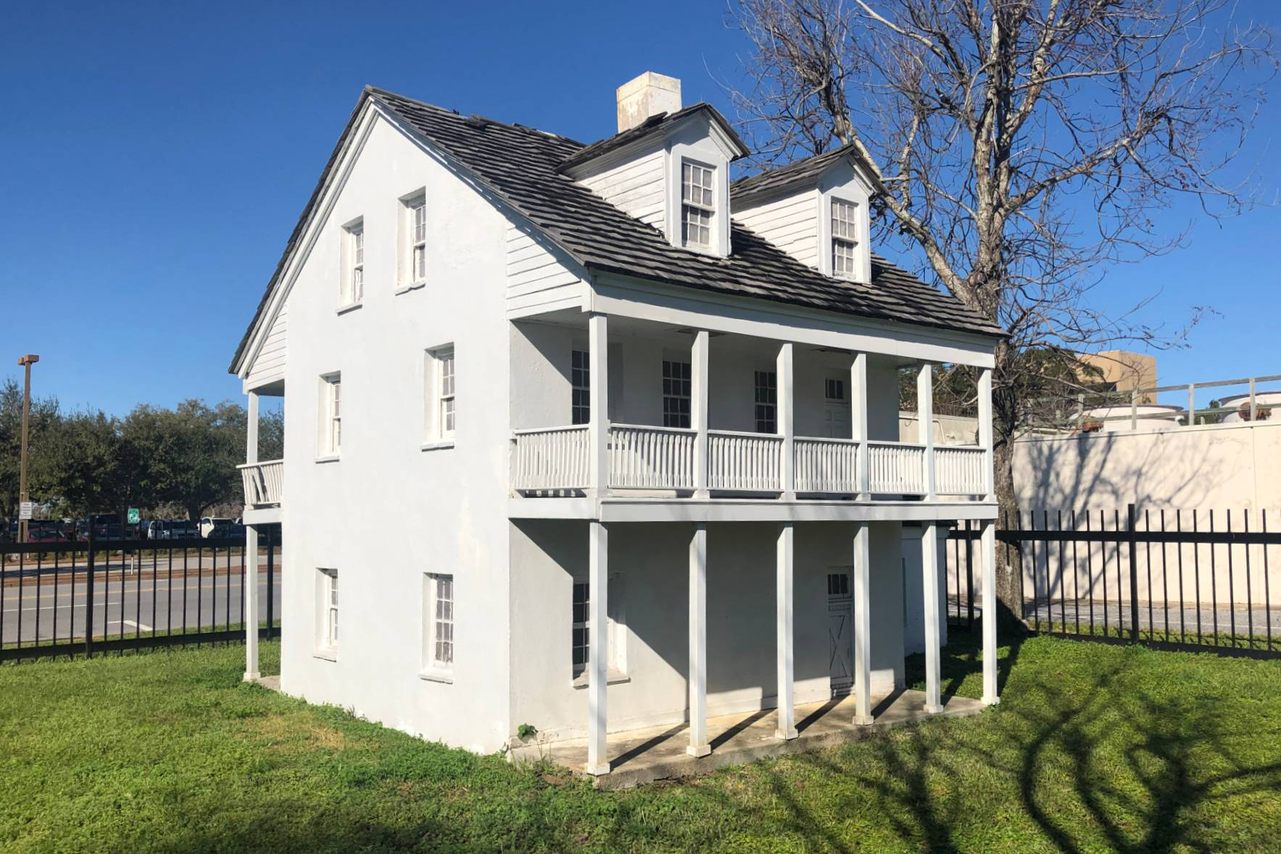 The little replica in downtown Pensacola, which occupies the corner of Main and Spring streets, was built in 1955. Jennifer Franklin
MINIATURE MANSION

Is it a dollhouse? Is it an age-old tiny house? It’s neither, but both are good guesses. The house, which is approximately 12 feet tall and 19 feet long, is a replica of the Panton-Leslie Trading Post, circa 1772. Panton Leslie & Co. was a company of prolific merchants operating in the Gulf and the Caribbean. Its headquarters were originally built as founder William Panton’s private home, but the house later became the nerve center for the business starting in the 1790s. The little replica in downtown Pensacola, which occupies the corner of Main and Spring streets, was built in 1955 for decidedly modern reasons: It was constructed to disguise an unsightly gas regulator station. Though the pipes are no longer in service, the diminutive house serves as a reminder of the city’s sea-faring past. 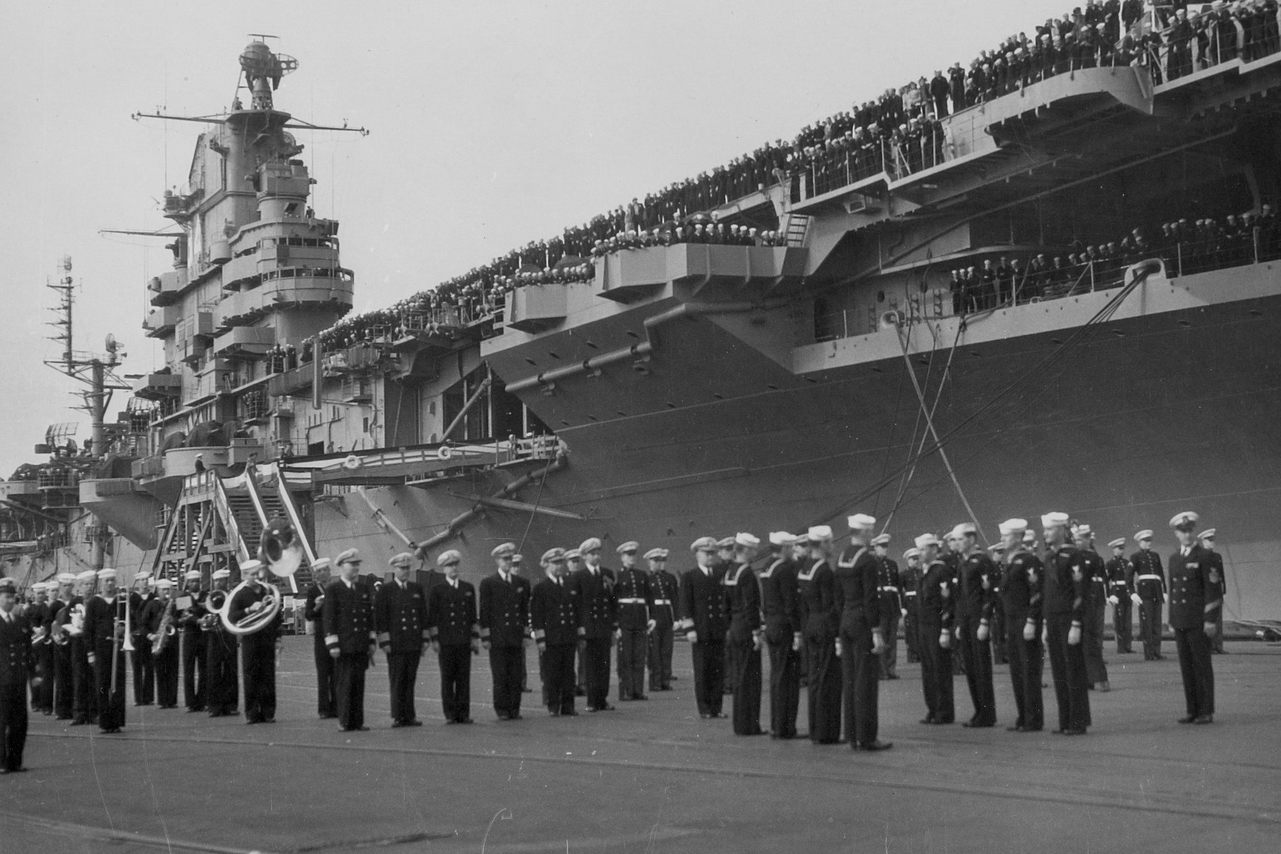 Pensacola’s storied naval history has made the city a destination for divers, but one dive site stands out: the former USS Oriskany, an 872-foot Essex-class aircraft carrier. It became the world’s largest artificial reef when it was deliberately sunk in 2006, 25 miles south of Pensacola. Find a dive outfit to take you to see this underwater marvel and explore anywhere from 80 to more than 200 feet beneath the surface. The ship saw action in both the Korean and Vietnam wars and is now home to all kinds of marine wildlife—divers have even reported swimming with whale sharks (the largest fish in the sea), as well as amberjack, grouper, and sea turtles. 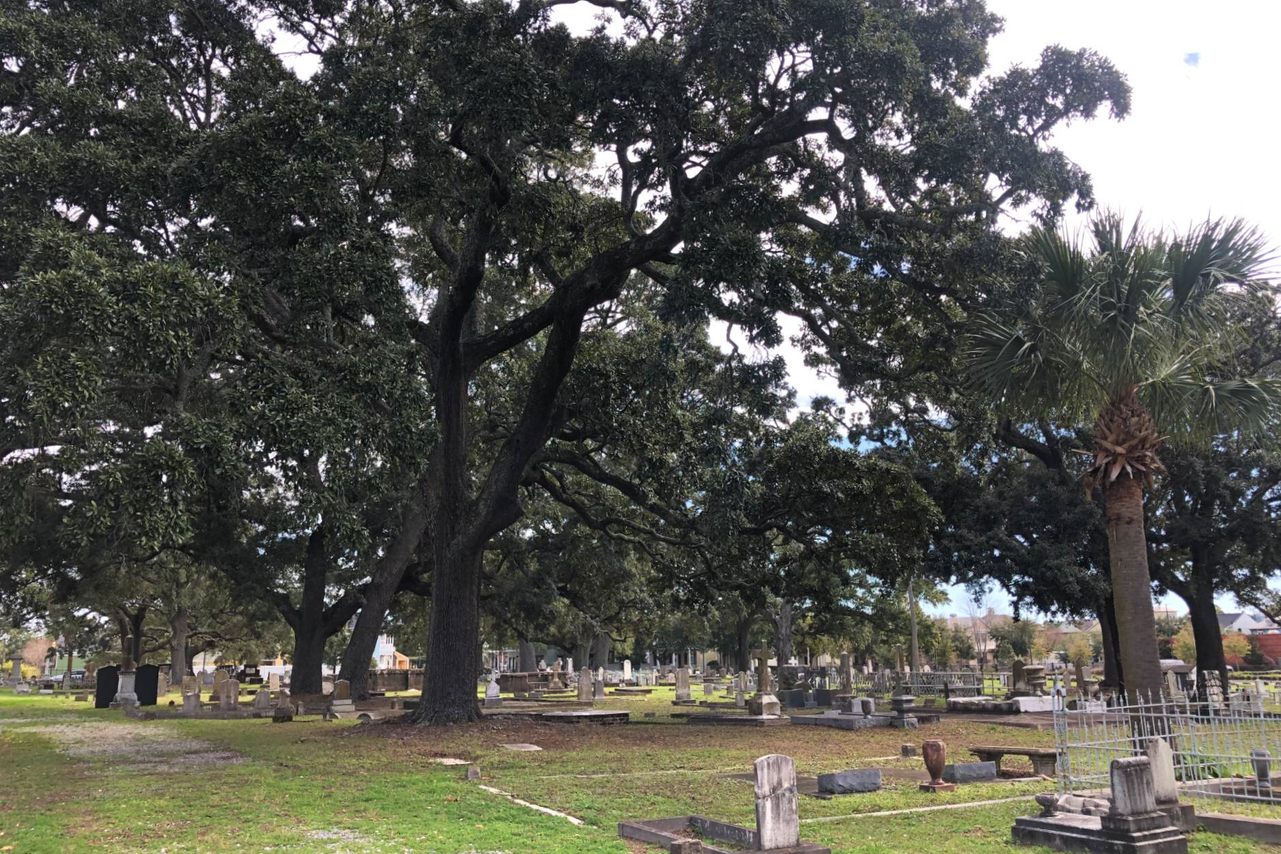 The site is part of the Colonial Archaeological Trail and visitors can pick up a handset (think old-fashioned wired telephones) to gain insight into what lies beneath the ground. Jennifer Franklin
WHAT LIES BENEATH

Wander among the headstones at this burial ground, officially designated a cemetery by the King of Spain in 1807. Although originally assigned to the Catholic inhabitants of Pensacola, people of all faiths have traditionally been buried here, including Spanish, British, and Americans (both white and African American). The 8-acre property includes a Colonial road dating to 1764, and it serves as the final resting place for noteworthy individuals like Modeste Hargis, the first female pharmacist in Pensacola; Dorothy Walton, wife of George Walton, who was one of the signers of the Declaration of Independence; and Wade Hampton Harvey, Pensacola’s first black mortician. The site is part of the Colonial Archaeological Trail and visitors can pick up a handset (think old-fashioned wired telephones) to gain insight into what lies beneath the ground. Far from macabre, the audio sets are equipped with presentations on interesting topics about the gravesite.

The city’s ideal spot on Pensacola Bay means that it’s in easy striking distance from Pensacola Beach and Perdido Key, with all kinds of outdoor adventures awaiting you both on water and on land. 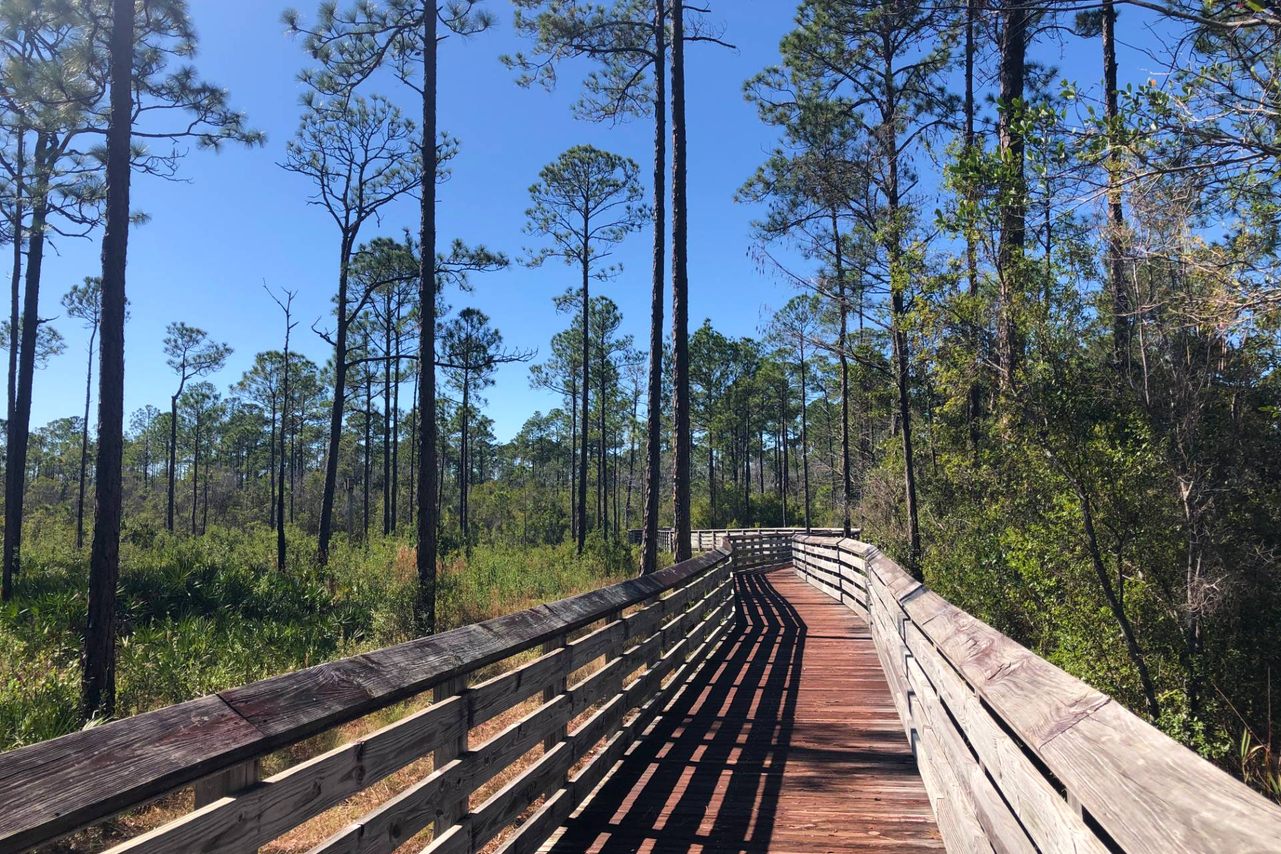 The parcel of wet prairie habitat land is home to one of the largest colonies of rare white-topped and parrot pitcher plants in Florida. Jennifer Franklin
FLORA-OF-PREY

This tranquil 4,200-acre state park may look like a nature lover’s paradise. And it is if you’re human or some other variety of mammal, but it’s fraught with danger for the unsuspecting mosquitoes, beetles, flies, and wasps that make up the native pitcher plants’ preferred snacks (they trap and digest the insects to score needed phosphorus and nitrogen). The parcel of wet prairie habitat land was purchased in 1998 as the 900-acre “Perdido Pitcher Plant Prairie”—an apt name, as it’s home to one of the largest colonies of rare white-topped and parrot pitcher plants in Florida. To see this unusual display of flora, strike out on the 1-mile Tarkiln Bayou Trail. When you find the marked Emma Claire Boardwalk of Hope, look at the low-lying ground on either side and you’re sure to see a proliferation of pitcher plants in all their glory. While you wander, keep an eye out for other attractive blooms like the grass pink orchid, Tracy’s sundew, and rose pogonia orchid, which find shade beneath a forest of slash pines. Feeling energetic? Opt for the rugged 6.5-mile Perdido Bay Trail, which winds all the way down to the water.

One of the best places in Florida to spot rare, carnivorous pitcher plants.
See More 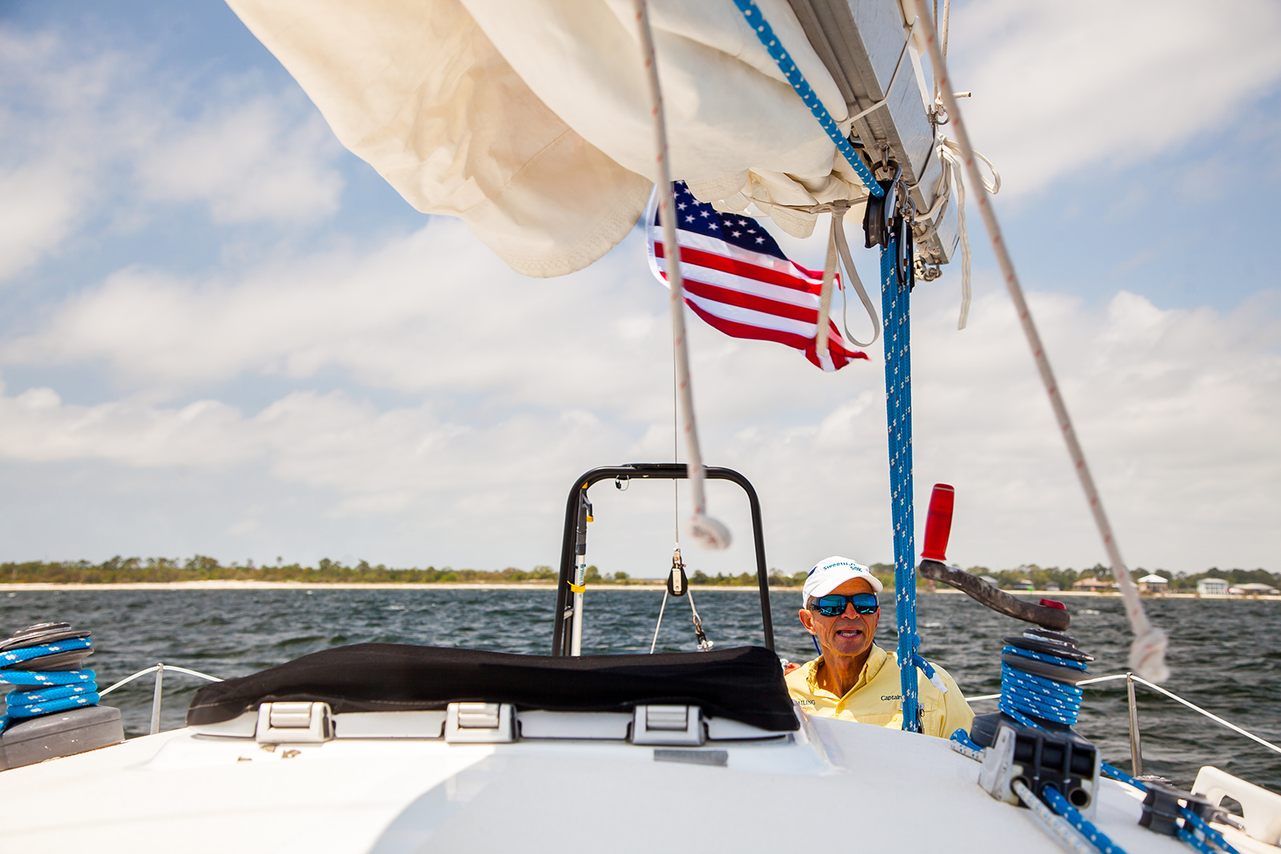 Local Captain Michael Kirk will take you for a tour of the crystalline waters off the coast to look for pods of native dolphins and perfect sunsets. Steven Gray
GLIDE ATOP THE WAVES

One could spend a whole day basking in Pensacola Beach’s famous sunshine, but to experience the water from a different vantage point, hop aboard a rare 40-foot-long Condor trimaran (named Dare II), one of only 21 ever built. Local Captain Michael Kirk will take you for a tour of the crystalline waters off the coast to look for pods of playful native dolphins, and depending on the time of day, perfect sunsets. The 54-foot mainsail and smart construction mean no topsy-turvy leaning, virtually guaranteeing you won’t get seasick. All that’s left to do during the two-hour excursion is dangle your feet in the water and congratulate yourself on finding the perfect way to experience this destination. 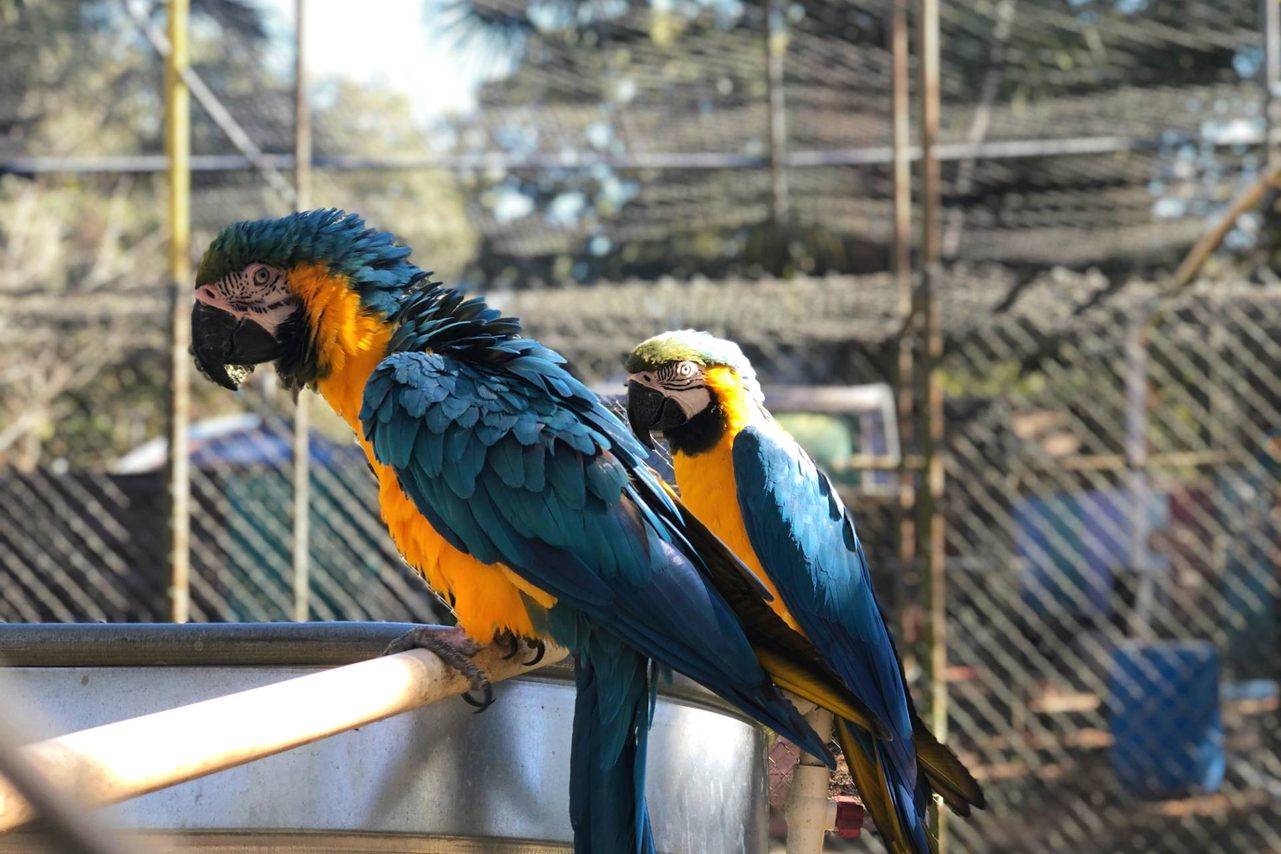 Ornithophobes may want to skip this stop, but for everyone else, this educational 1.5-acre bird rescue and sanctuary is a must-visit. Started as a nonprofit in 1998, it’s now home to more than 170 birds including macaws, amazons, cockatoos, cockatiels, conures, peacocks, emus, and more. The volunteer staff cares for the avian residents, many of which are surrendered when their owners can no longer care for them (for instance, macaws live as long as 80 years and sometimes outlive their owners). A cup of pasta, peanuts, and fruit is included with admission, and a volunteer will show you how to safely feed (“you want to leave with all of your fingers!”) the hungry—and often, talkative—birds. Offer one of the colorful residents a snack and you might hear cries of “Hello!” or “Cracker!” from nearby cages, beckoning you to share your treats. 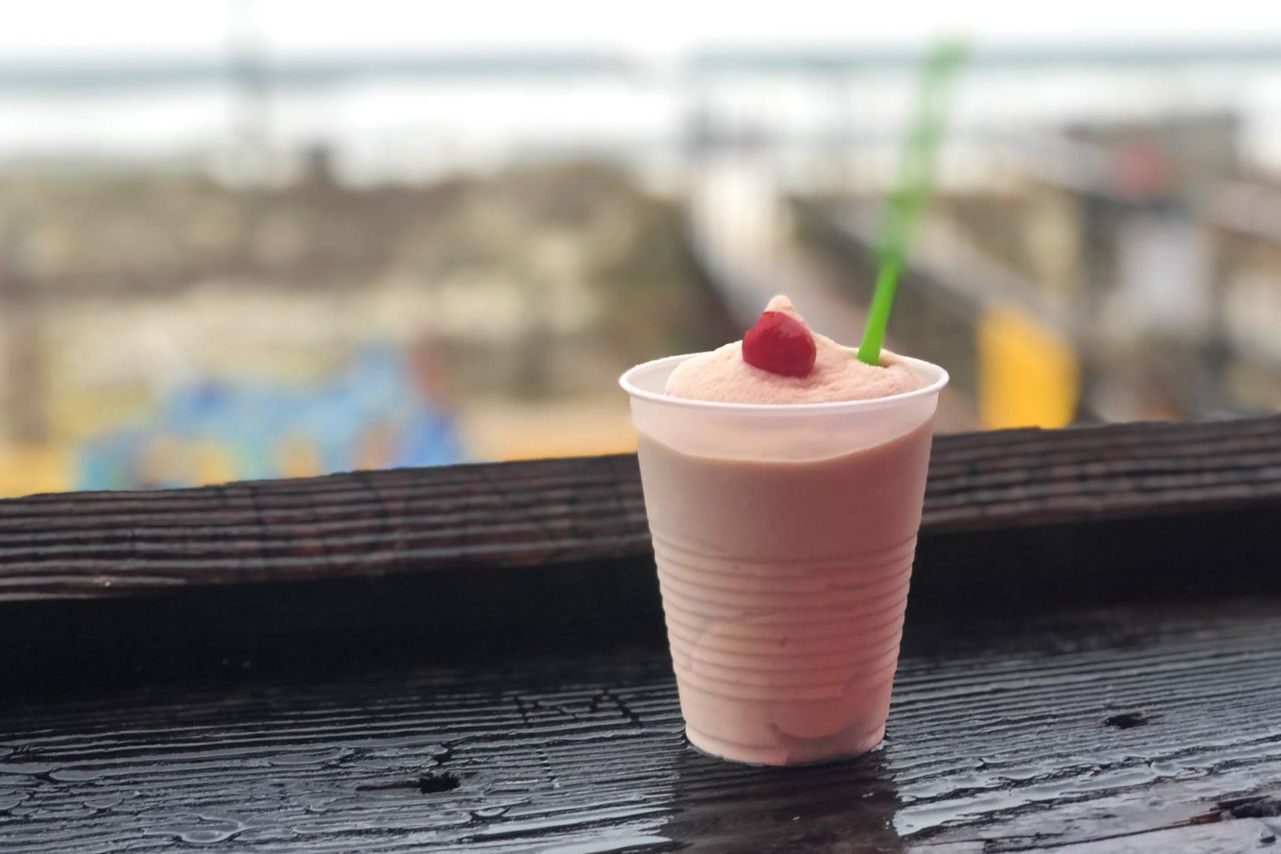 4. The Bushwacker at Flora-Bama

Every beachside destination needs a signature boozy beverage, and Pensacola’s no exception. Its drink of choice is the sweet and creamy Bushwacker. Though each of the bars along the Gulf Coast keep their exact recipe close to the vest, most of these blended concoctions have coffee liqueur and rum, as well as some combo of Irish cream, bourbon, crème de cacao, coconut milk, and cream. It’s such a requisite refreshment at this bar on the Florida-Alabama line (close enough to toss a mullet over the state line, as hundreds of revelers do in a competition each summer), that bartenders mix up giant batches to serve straight from frozen machines. Think of them as adult milkshakes and a word to the wise: Sip slowly.

Every April, contestants fling a dead fish over the Florida-Alabama state line for charity.
See More