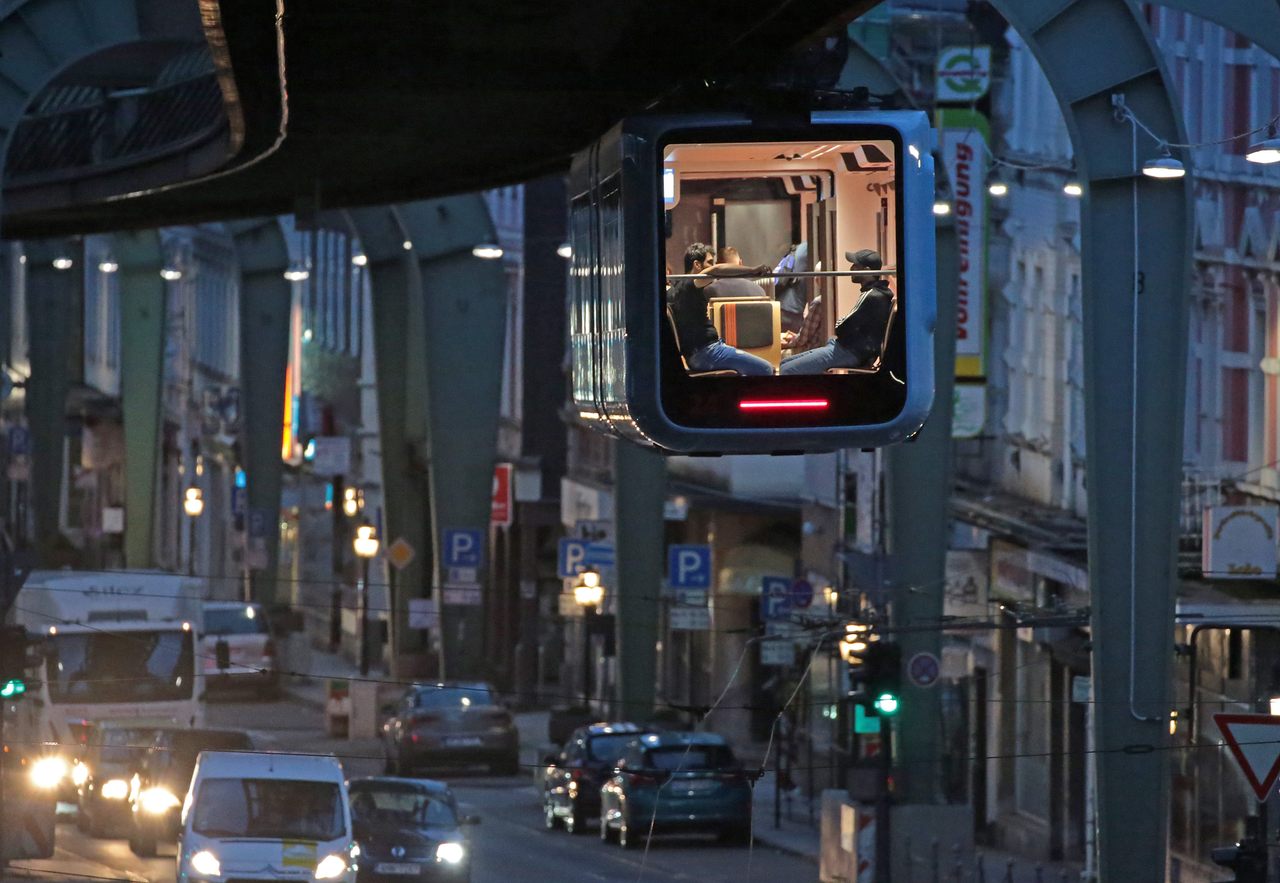 A suspension railway is almost like a theme-park ride you can take to get to work. Oliver Berg/picture alliance via Getty Images
In This Story
Place

This "floating railway" is one of the world's oldest monorail systems.
Destination Guide

Every city needs a mascot, animate or otherwise. Oakland, California, for instance, has the algae-green Midcentury Monster.

The German city of Wuppertal has the Schwebebahn—a sprawling suspension railway so beloved that when it reopened on August 1, 2019, after nearly nine months of renovations, locals greeted it with cheers and workers doled out celebratory waffles and ice cream at the stations.

The route spans 20 stops, stretches a little more than eight miles, and hauls more than 65,000 riders a day. Construction began in 1898, and members of the public first climbed aboard in 1901. The railway was badly damaged during air raids in 1943, and for a few years, the route carried only emergency shuttles. It was fully functional again by 1946, but a handful of accidents have put the monorail out of commission for a few days, weeks, or months since.

(Some have been fatal, and others just zany—such as the day in 1950 when a young circus elephant named Tuffi tumbled from a rail car into the river and lived to trumpet about it.)

But the railway has never been immobile this long. It had been closed for repairs since November 2018, when a portion of it collapsed. Now, commuters can climb on board once more, surveying the streets and the Wupper river much as a bird would.

The mayor, for one, is thrilled to have it back in action.

“Wuppertal is rather attached to its suspension train,” Mayor Andreas Mucke told the crowd that turned out to inaugurate its return. The train “amounts to the city’s trademark,” he told The Guardian.

Speaking to the local Westdeutsche Zeitung newspaper, Mucke went even further, describing the railway as iconic and inseparable from the city it crawls above. Wuppertal without the Schwebebahn, Mucke said, would be “like Paris without the Eiffel Tower.”

Everything You Thought You Knew About ‘Hobo Code’ Is Wrong

Rail riders past and present leave messages for each other, but not the ones you’ve probably heard about.
railroads

Over the last 50 years, Amtrak has seen many designs come and go.
Video