Why Is Scotland Apologizing Now for Witch Trials 300 Years Ago? - Atlas Obscura
Want to see fewer ads? Become a Member. 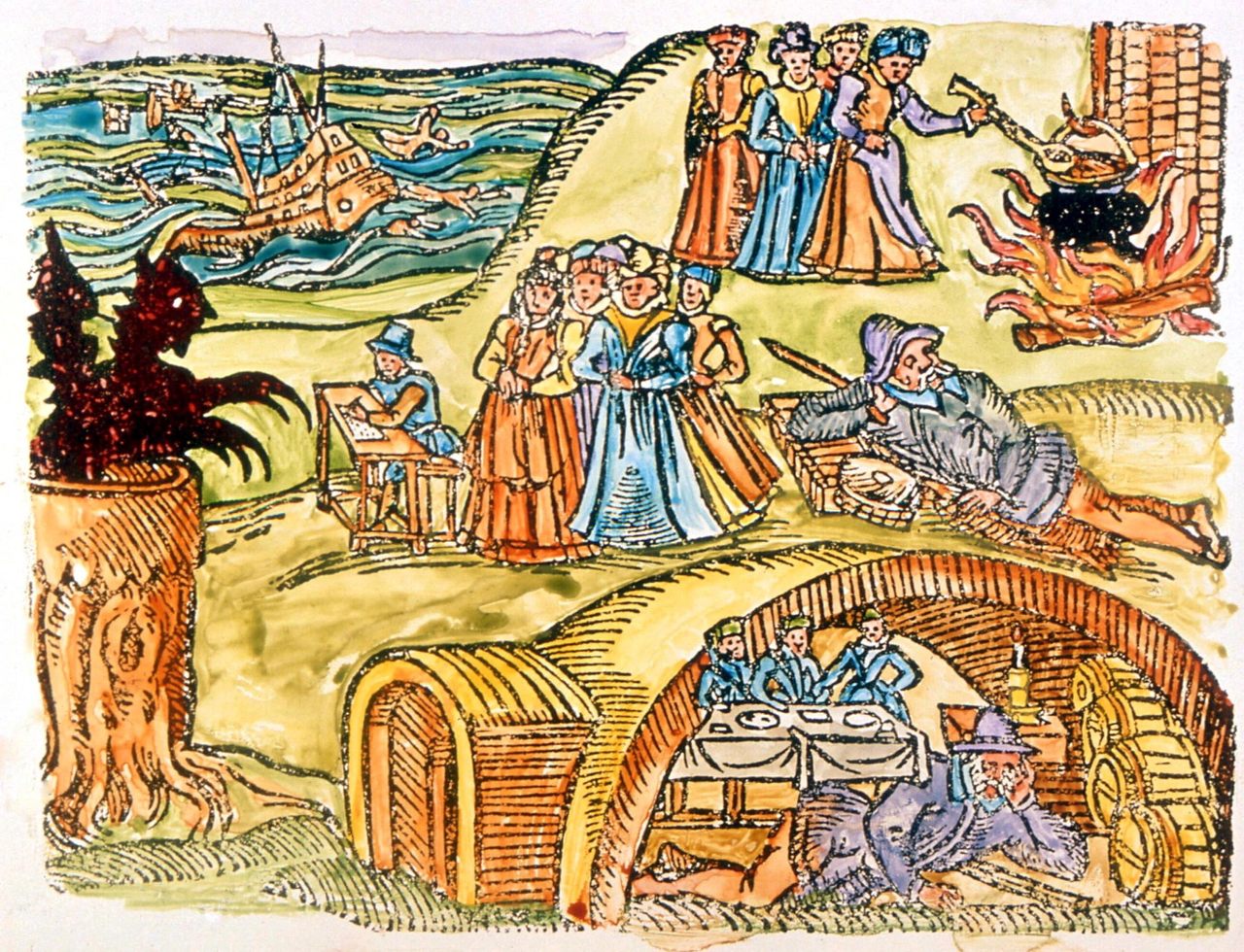 In the late 16th century, the quaint coastal town of North Berwick, Scotland, depicted here in a 1591 print, became an early hotbed of witch accusations. Some 60 people were accused, both nobles and servants, and many were executed. Charles Walker Collection/Alamy Stock Photo

It was October 15, 1633, and Alison Dick wasn’t allowed to sleep. She was covered in grime. Freezing wind cut through her like a knife. Several soldiers loomed outside the dank church steeple that had become her cell. They had been paid 14 shillings to keep her awake, though history doesn’t record how. Perhaps they yelled or poked her or threw water on her. Local church court documents say only that Dick “is ordaned to be wakeit heirafter.” Likely she was not allowed to sleep for days, growing increasingly incoherent, angry, and perhaps even suffering from hallucinations. A week prior, Dick had confessed to being a witch. Her husband “gave hir, soull and bodie quick and quidderfull to the devill,” she said. Almost a year later, on November 19, 1633, Alison Dick and her husband William Dick were burned for witchcraft.

The Dicks were just two of the 3,837 people accused of witchcraft in Scotland between the late 16th century and 18th century—one of the highest numbers per capita in a Europe afflicted by a centuries-long witch panic. Now, more than 300 years later, the Witches of Scotland campaign is seeking a legal pardon, formal apology, and national memorial for those accused, tried, and executed (about two-thirds of those accused) for witchcraft. Earlier this month, on International Women’s Day, the campaign garnered national attention when Nicola Sturgeon, Scotland’s first minister, issued a formal apology to the people tortured and executed under the Witchcraft Act of 1563. In her speech before parliament, Sturgeon said, “Those who met this fate were not ‘witches.’ They were people. And they were overwhelmingly women.” She continued, “it was injustice on a colossal scale, driven at least in part by misogyny in its most literal sense—hatred of women.” Zoe Venditozzi, half of the two-woman team behind the campaign, says, “we are absolutely delighted” by Sturgeon’s formal apology, “but it’s just the first part of our campaign.”

For Venditozzi, a teacher and writer from Fife, her participation in the Witches of Scotland campaign started with a wedding. As people were milling about, Venditozzi met Claire Mitchell, a senior trial lawyer in Scotland known as a Queen’s Counsel. We “bonded over our mutual love of true crime podcasts, and I said to her, ‘Oh, you know, I really want to do a podcast. I just haven’t quite worked out what it would be about yet,’” says Venditozzi. “And she said, ‘Oh, well I’ve got this podcast,” and Mitchell just happened to be in need of a cohost.

After taking note of local memorials that recall Scotland’s witch trials—such as the Witches’ Well and the Witches Stone—Mitchell started digging into actual court documents. “I started looking at witch trials after that as kind of an academic, legal exercise to find out what were these witch trials about, how many of them were there, what was the evidence like,” she says. What she found was appalling. Many confessions were given under duress: most often sleep deprivation, but also physical torture, such as thumbscrews and branks (iron muzzles). Professional “witch prickers” would be hired to needle the accused, literally, until they found a spot that didn’t bleed or cause pain—a spot known as a witches’ mark or Devil’s mark. Some were stripped and examined for this telltale sign of the supernatural.

Mitchell became determined to bring light to this dark, little-known chapter of Scottish history. On March 8, 2020, once again on International Women’s Day, Mitchell and Venditozzi officially launched their podcast, in which they interview experts and share stories from Scotland’s witch trials, and publicized their demands for an apology, pardon, and memorial for those accused of witchcraft in the country.

Even in academic circles, the study of the witch trials is treated “as a less important subject,” says historian Lizanne Henderson of the University of Glasgow. As an undergraduate student in Canada, “there was a sense that it wasn’t a proper historical subject,” she says. “I even now find that there’s a bit of bias against this topic in certain circles. It’s not considered a core topic, more of a peripheral subject.” Henderson links this to “21st-century attitudes assum[ing], at least in the Western world, that witchcraft isn’t real.” Since the Enlightenment, there’s been an emphasis on the study of what’s verifiable, she says, which has pushed the study of witchcraft to the fringes—regardless of the very real tortures that the belief in witchcraft has created, all over the world and spanning centuries. Even today, people continue to be attacked as witches around the world.

Mitchell, Venditozzi, and Sturgeon all cite misogyny as an important part of why early modern witch trials occurred and why they’ve been largely overlooked today. In Scotland, 84 percent of those accused of witchcraft were women. But Henderson says the role gender played in the trials is a “difficult one” to analyze. “Scotland during the period of the witch hunts was definitely a patriarchal society. There’s no getting out of that,” she says. But Scotland’s patriarchal society “had also existed in the hundreds and hundreds of years before the witch hunts, but they didn’t have the same kind of desire to root out women as witches then.” Something shifted, though scholars argue about what. Henderson posits it might’ve been the reformation and Scotland’s increased religiosity that drove the nation’s anti-witch frenzy.

Today we’re used to seeing witches cast spells and weave magic on television and in the movies, but today’s witch stereotypes offer a “convenient sort of girl-ifying of this history,” says Venditozzi. In popular culture, witch characters today are most often feminists challenging the status quo. But many of our modern assumptions about witches don’t reflect the actual history of Europe’s early modern witch trials, says Henderson.

For one, not all witches were female. (In some countries, more men were accused of witchcraft than women.) Both nobles and servants were accused of witchcraft in Scotland. Allegations generally came from “social equals,” says Henderson. The accused weren’t generally poor , nor were they usually healers or midwives. Modern assumptions about witches as downtrodden women have entangled myth and history.

Henderson worries a pardon might perpetuate this rewriting of the past. With a pardon, “you’re denying the fact that, according to the standards of the time, these people were found guilty,” she says. Whereas “I think an apology is probably more appropriate because it’s acknowledging that something happened that shouldn’t have.”

If Scotland succeeds in issuing a pardon to those accused of witchcraft, they’d be joining other governments that have already done so, such as Catalonia in Spain, Switzerland, and Germany. For Venditozzi, the pardon is an important step of acknowledgment “so that we are heralding to ourselves as Scots and to the rest of the world that we know that this was something that was wrong.”

Regardless of what becomes of the pardon, Henderson, Mitchell, and Venditozzi all agree that they would like people to gain an appreciation that those accused, tried, and executed for witchcraft were everyday women and men. “We want to make sure that people have access to the facts as we know them,” says Venditozzi. “Not the idea that these were red-headed pretty creatures who stood up against the man. That’s not what happened. We want people to understand that these were ordinary people, mostly women, who were just living their lives and because of a repressive religious regime and political shifts, and because of the lack of status of ordinary women, they were then victimized.”

The Affair of the Poisons was one to remember.
murder

There's more to this 19th-century crime than the dark side of fairy lore.
witchcraft

From German witches to vampiric Malaysian spirits to a real-life poisoner.
List

7 of Scotland’s Most Enchanting Standing Stones

These ancient monuments have captivated the imagination for thousands of years.
List

4:00
Want to see fewer ads? Become a Member.
From Around the Web
Atlas Obscura Trips
Scottish Highlands: Clans, Castles, & Cèilidhs
View This Trip
Thanks for sharing!