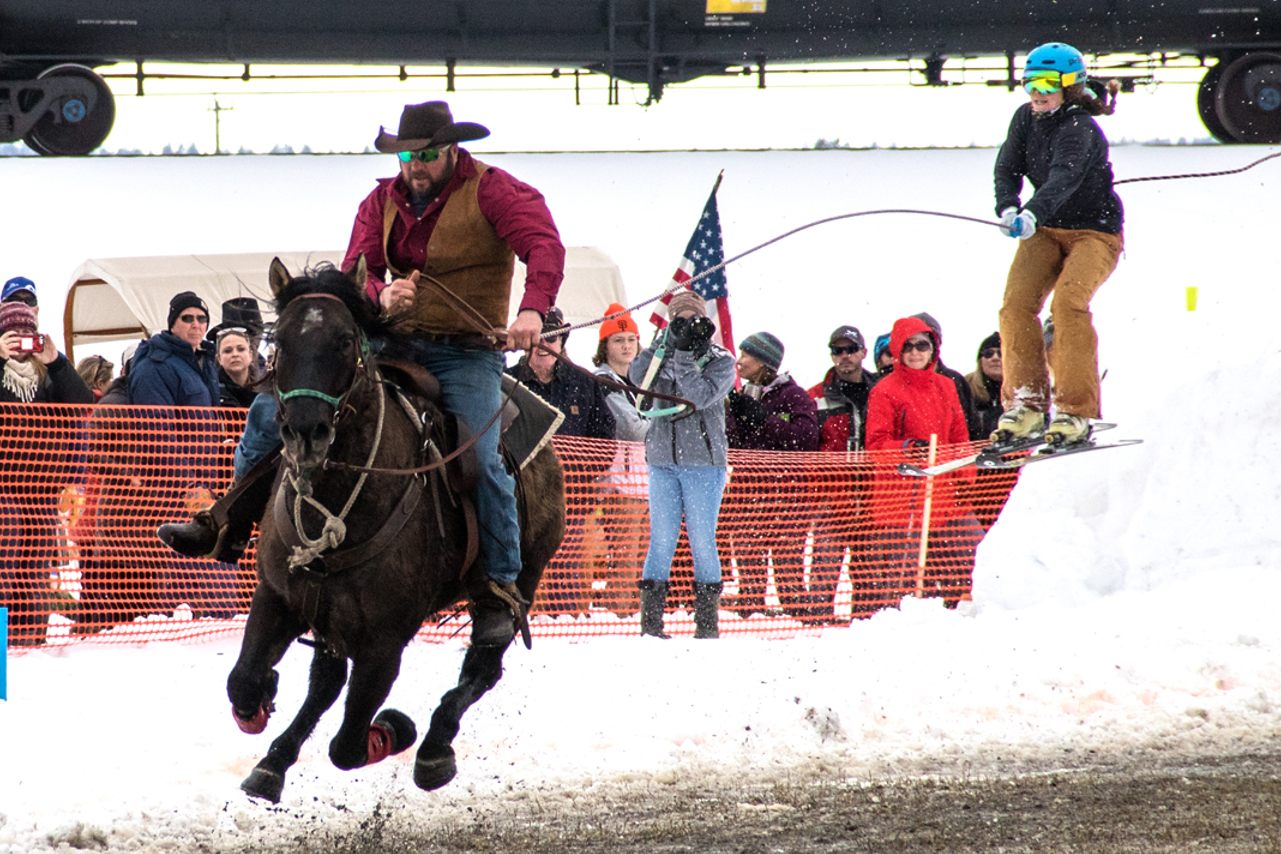 On January 20, 2020, Ted Valentiner and the other organizers of annual World Invitational Skijoring Championship in Whitefish, Montana, stood in a snow-covered field just outside of town. They had gathered to make a fateful decision about the upcoming event, scheduled to take place a few days later—a decision they hoped they would never have to make. They were thinking about canceling the whole thing.

“We agonized over the decision for hours and when you finally do decide to cancel, you always second guess yourself,” says Valentiner, a Whitefish resident who is on the event’s volunteer board. “It’s a big disappointment.”

Skijoring combines skiing with horseback riding. In its simplest form, the sport features a horse dragging a skier, and this event puts them together on an obstacle course of jumps, gates, and hanging rings that the skiers are supposed to grab as they speed by. Each run through the course is timed and, if a skier misses a jump or a ring, a few seconds are added on.

Skijoring, which means “ski driving” in Norwegian, dates back centuries and originated—like a number of winter sports—as a way to get from one place to another. In the early 20th century, competitive skijoring spread across Europe and North America; it was even included as an exhibition sport at the 1928 Winter Olympic Games in St. Moritz, Switzerland.

Since the 1960s, skijoring has been the marquee event of Whitefish’s annual Winter Carnival celebration. In the early years, it was held downtown, but the carnival’s insurance provider put the kibosh on that in the 1970s after one of the competitors nearly skijored through a plate glass window. About 20 years ago, a group of riders and skiers got together to revive the event—at the edge of town, where Valentiner and the others had gathered. In 2020, more than 80 teams—a horse, rider, and skier—were signed up to compete.

There was plenty of snow in the field on January 20, but everyone was worried about an incoming warm front. Skijoring requires a lot of deep, fresh powder. It had never been a problem before, not in a place that can get more than 65 inches every winter and four times as much on the mountain that looms over the town. In the end, that warm front did what even insurance reps couldn’t do—put an end to the skijoring championship, at least this year. It was a hard decision, but the right one, since much of the snow melted a few days later.

Unfortunately, the Whitefish event isn’t the only skijoring competition that had to be canceled this winter. A mild season led to the cancellation of a half-dozen more in Montana, Wyoming, and Colorado over the last few weeks.

Warm winters can disrupt everything from water supplies to fruit crops, and they have a negative impact on cold-season sports, and the economies and communities that rely on them. According to a 2019 report from Climate Central, a nonprofit science and communications organization that focuses on climate change, nearly 24 million Americans participate in winter sports, contributing roughly $11.3 billion to the economy. The report goes on to state that if climate continues to change as it is projected to, winters will get shorter and drier. In Colorado, where snow sports support more than 43,000 jobs, there was an average of 170 days with below-freezing temperatures every year between 1981 and 2010. If warming trends continue, that could drop to just 144 days per year between 2040 and 2059—a major blow to one of the state’s key industries.

The impact is being noticed on ice, too. In 2012, two geographers at Ontario’s Wilfrid Laurier University, Colin Robertson and Robert McLeman, decided to start tracking the number of days it was cold enough to skate on outdoor ice rinks in their area, including both homemade, backyard rinks and municipal ones. The scientists set up a website called Rink Watch with the hope that a few people might be able to help them out with data. Eight years later, they’ve received reports from more than 1,500 users from across North America. “We initially hoped that a few people would participate and it grew a lot faster than we ever anticipated,” Robertson says.

On the site, citizen participants can log if they can skate on their rinks and the quality of the ice: hard and fast or soft and slow. In 2015, using the data that they had gathered, the Rink Watch crew released a report that suggested the number of days cold enough for skating in Quebec and Ontario would drop by 34 percent this century. Robertson says while it may still be possible to set up a backyard rink—usually by laying out a plastic liner, flooding it, and hoping it freezes overnight before adding another layer—in the coming decades, the ability to actually use it will become much more unpredictable. The biggest enemy of the rink, backyard or public, he says, is just like the one that claimed the skijoring events hundreds of miles away: the sudden warm spell.

“Ice rinks are important to cities and small towns, it’s part of Canada’s cultural fabric,” Robertson says, adding that he hopes he can soon teach his three-year-old daughter how to skate. He adds that what he likes most about the Rink Watch project is that it helps show the general public how the climate is changing—and how that change will affect their lives and culture. “The classic image of climate change is the polar bear standing on a melting iceberg, but most people can’t relate to that,” he says. “But they can relate to skating on an outdoor ice rink.”

It’s unlikely the joy of the backyard rink or the spectacle of skijoring will go extinct soon, but it’s easy to see how warming winters are going to be an obstacle to these and other winter sports and pastimes in the near future. Enough days without good ice, and it might not be worth it to set up that rink. Enough cancelled community winter sports events, and cities and towns may decide to do something else entirely.

Despite the challenges, however, Valentiner isn’t throwing in the towel. He says it takes months to organize the skijoring competition in Whitefish, including lining up sponsors and vendors. One day last year, he put more than 300 miles on his truck driving around northwest Montana trying to get people to sponsor the event. It will take more than a few warm, dry, frustrating winters to derail his love for the sport and the community that turns out for it.

“The weather is constantly a concern, it’s always in the back of your mind when you start planning,” he says. “But when you do get that good snow year, it’s just a joy to put the event on.”

What Would It Take to Make Nepal the Next Great Ski Destination?

Madi Dermé doesn't want to be the last of the country’s legendary cavaliers.
science

A different process than evaporation, sublimation turns snow and ice directly into a gas.
paintings

Mapmaking Taught Skiing’s ‘Rembrandt of Snow’ the Art of Patience