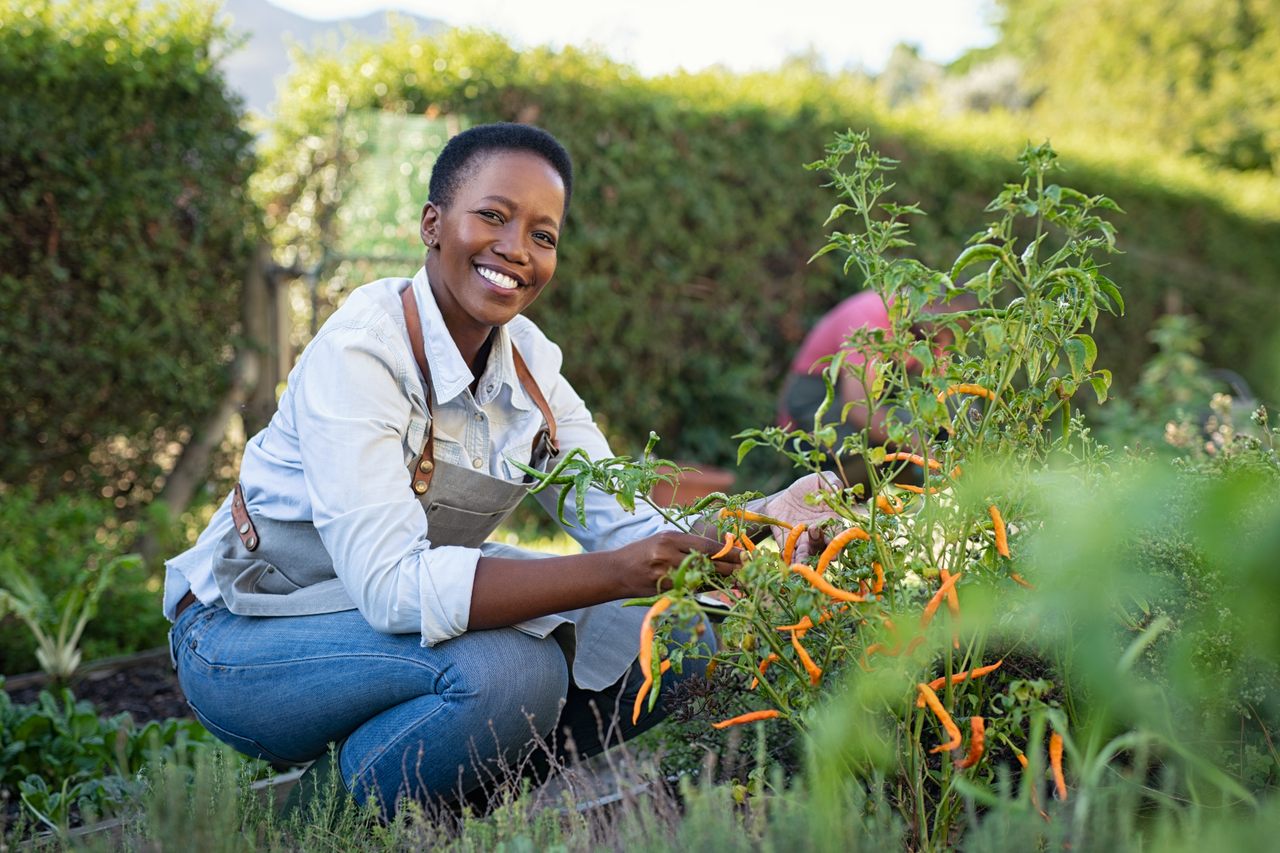 Green America estimates that over the next 10 years, their 2,500 registered climate victory gardens will have a massive greenhouse gas off-setting effect. Courtesy of Green America

In 1944, at the height of World War II, 20 million home gardeners across the United States dug deep to support the war effort. As the country poured the bulk of its resources into the conflict, Americans grew Victory Gardens to bolster the domestic food supply.

Nearly a century later, Jes Walton is trying to bring those gardens back. As the Food Campaigns manager at Green America, an environmental advocacy organization, Walton is one of the people behind Climate Victory Gardens, a campaign to encourage climate-smart home gardening. From its launch, Walton saw a steady trickle of people add their gardens to the campaign’s crowd-sourced map. Social distancing requirements have turned that trickle into a flood, with Walton citing a 60 percent increase in inquiries from 2019.

As many Americans face the prospect of empty grocery store shelves and emptier bank accounts, gardening can provide a sense of stability as well as food security. The newfound interest has created a rush on seeds, with some larger suppliers setting strict limits on new orders. Amidst the frenzy, small seed companies have proven resilient.

The rise of small seed companies is good news for both gardeners and the environment, as these vendors are more likely to specialize in heirloom varieties that are suited to local climates, taste delicious, and can produce seeds that can be saved and shared year after year. From vegetables of the South Asian subcontinent to chile peppers of the world, these small seed companies offer unique produce to grow in your very own quarantine Victory Garden.

In 2001, J.P. Prasad noticed a trend. Friends and neighbors in his predominantly South Asian community were so hungry for the crops of their homelands that they kept attempting to bring seeds into the United States. “People were trying to smuggle this stuff over and customs wouldn’t allow it,” Prasad says. “I felt there was a definite need to start a company for this.”

So Prasad founded Seeds of India, an online company that offers the seeds to grow dozens of South Asian culinary and medicinal vegetables, flowers, and herbs. From scaly-skinned karela (bitter gourd) to fragrant, sacred tulsi (basil), Prasad’s business features beloved foods that are otherwise difficult to find in the United States. Other unique seeds include gongoora (roselle), a spinach-like leaf that adds a sour touch to South Indian curries, and Indian okra varieties, which are longer and less woody than their American peers.

The heirloom fruits, vegetables, and flowers Nevison oversees are all inspired by Jefferson’s original gardens, which included European imports and native American plants. “He was always promoting American varieties because there were a lot of folks who wrote about the inferiority of American plants,” says Nevison. (While Monticello’s plants were a wonder, they came at the expense of the hundreds of slaves Jefferson forced to work on his property.)

To provide Jeffersonian plants for the modern garden, Nevison and his team referenced the Founding Father’s extensive botanical writings and coordinated with seed-saving communities to find similar heirlooms. At least one plant in the collection, the Blackberry Lily—a star-like, ruby-red flower—is a descendent of a Monticello original. Others, like the balsam apple, a tropical vine whose orange-red fruits were used to treat wounds, and Queen Anne’s pocket melon, a fragrant variety that noble English ladies once carried as perfume, are similar to the plants noted in Jefferson’s diaries.

Brijette Peña wants to create a million urban farmers, and she’s already well on her way. In 2010, she founded San Diego Seed Company, which specializes in plants suited to the hot, dry climate of Southern California, after noticing the lack of seeds specialized for urban gardeners in the region. Now, her offerings include indigenous, desert-adapted tepary beans, juicy little sugar baby watermelons, and classes tailored towards beginning gardeners, which have now moved online.

Peña recommends new gardeners try the Peruvian ground cherry, an Inca-bred perennial tomato relative that she first sampled in Peru’s Sacred Valley. “It’s super tart and sweet, and just an explosion of flavor in your mouth,” she says. The plant produces year-round red berries that are perfect for snacking and making jelly.

“To not be able to be with people and share the seeds face to face is unusual for me,” says Ben Cohen, cofounder of Small House Farm in Sanford, Michigan. A farmer and seed saver, Cohen founded the Michigan Seed Library Network and organizes the Central Michigan Seed Swap, which brought together over 700 gardeners in 2019. Now, the uptick in seed orders is keeping him and his family busy. “It brings people comfort to get into the garden,” he says.

While Cohen can’t meet his community in person, each of his seeds reminds him of the person who saved it. The Old Carolina tomato, for example, bears family history in its meaty, red-yellow lobes. “I got the seeds from a young man who found them in his grandma’s freezer in North Carolina,” he says, where they’d sat for at least 50 years.

Now, Cohen is extending the same spirit of community with a new customer service: free shipping on orders of $20 or more. “People need the seeds,” he explains. “We’ve gotta get the seeds to the people.”

“I haven’t met a Native American pepper that I didn’t like,” says Jim Duffy, owner of Refining Fire Chiles. That’s saying a lot, because Duffy, since discovering a passion for salsa-making in 2003, has devoted his life to amassing what he calls the largest pepper plant empire in the United States. His holdings include everything from peppers that are “sweet like sugar” to those so hot they’ll “blow your head off,” he says.

The peppers’ names themselves are a world tour: there’s the Aleppo pepper, a smoky Middle Eastern variety with a bit of a kick; the glossy Iranian Cherry Pepper; and Croatian Elephant ears, “so sweet and so juicy you’d have to wear a bib if you bite into it,” Duffy says.

But Duffy values his collection of Native American peppers most of all. He’ll often throw an extra packet of Native pepper seeds into an order, in the hopes that the gardener will take to them. “It’s about loving and learning and finding chiles from all over the world that people have been eating for thousands of years,” he says.

Theresa Podoll married into her husband Dan’s family business in the 1980s, after falling in love with Dan—and his family’s squash. The first time she came to a family meal, they were taste-testing Prairie Road Organic Seed’s newly bred Uncle David’s Dakota Dessert Squash. Theresa didn’t think she liked squash at first, but one bite of the gourd’s sweet, nutty flesh changed her mind. “Yep, I married the guy,” she says.

The Podoll family breeds many of their open-source, unpatented seeds, such as the Sweet Dakota Rose watermelon, to suit the shorter growing seasons of northern U.S. climates. Other seeds, like the Arikara Yellow bean, are products of North Dakota’s indigenous agriculture. The first non-natives to describe the Arikara people’s yellow bean were Lewis and Clark themselves.

In 1917, Gijiu Kitazawa, a recent immigrant to California, was troubled by the lack of available Asian produce in his new home. Since he had apprenticed for years at a seed company in Japan before coming to the United States, starting his own seed business must have seemed like a no-brainer. The company has survived for more than a century, weathering Japanese internment in the 1940s and a rapidly changing Bay Area today.

Today, the company is experiencing more interest than ever, especially in vegetables such as bitter gourd, a traditional medicinal food. Demand is “phenomenal,” says owner Maya Shiroyama. Gardeners can purchase bitter gourd seeds on Kitazawa’s site, as well as native Asian and Hawaiian seeds such as edible burdock, poha berry, and plump little pickling melons .

Unique Seeds in Your Neighborhood

With many larger companies already out of seeds for the season and smaller companies facing increasing backlogs, it may be difficult to find all the seeds you need commercially. But don’t despair: trade. Sourcing seeds locally, or through snail mail seed exchanges, is a social-distancing-friendly way to support your community while growing your quarantine Victory Garden.

Many local greenhouses are particularly hurting right now, as several states have deemed them non-essential while leaving big-box garden retailers open. Walton, of Green America, suggests calling your local nursery or native plant center to see if they’re still selling seeds or offering curbside plant pickup. If your state has deemed farmers’ markets essential, you can also try scoping out tables selling seed, or ask friendly farmers for tips on saving seed from their non-patented, non-hybrid produce. Walton also recommends calling up your local seed bank or seed library, which may still be sending out seeds by mail.

But it comes to neighborly cooperation, nothing beats a good old-fashioned seed exchange. While many heirloom seed companies have reached capacity, you can source snail-mail heirlooms directly from other gardeners through large online exchanges, local social media, or community gardeners’ clubs. While gathering in person may not be in the cards for a while, a garden growing with our neighbor’s seeds can prove just as nourishing.

Restoring the grounds and its rare, heirloom crops recreated what was effectively the country's first seed bank.
gardens

A grassroots group is creating a living library of these backyard gardens.
plants

How to Plant a Home Garden and 'Free the Seed'

By saving and swapping seeds, you can preserve agricultural heritage.
farms

But can it be grown anywhere else?
Video • PinDrop

Hamissi Mamba and Nadia Nijimbere opened this community-minded restaurant serving dishes from their native Burundi.
Want to see fewer ads? Become a Member.
From Around the Web
Thanks for sharing!