How to Decode the Shells You Find Washed Up on the Beach - Atlas Obscura
Want to see fewer ads? Become a Member. 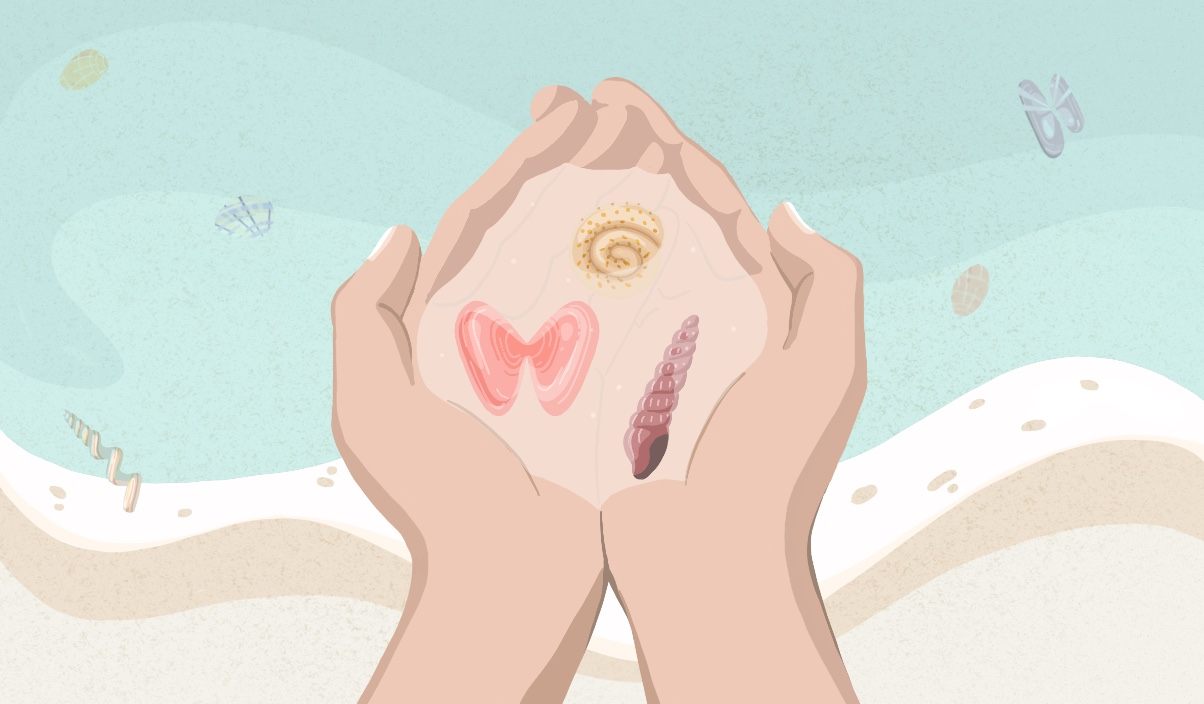 The water is full of wonders. All Illustrations: Kristen Boydstun
In This Story
Place

In a city crazy for seashells this museum educates and amazes visitors using the wonder of cast-off exoskeletons.

No matter where you are in the world, any beach you poke along is likely to be littered with serendipitous finds. Earth’s waters regularly spit out weird trash that we humans have dumped in there, along with natural treasures, such as shells, that have become dislodged from the depths.

If one of these shells catches your eye, you might want to pluck it from the waves—and if you do, you’ll probably want to know just what it is you’re looking at. When you do, you stand to learn a lot about life beneath the water.

We asked invertebrate experts for advice on how to suss out the shells you find on the beach—and if you’re sold on beachcombing, how best to set yourself up for successful shell-sleuthing.

Get your geographic bearings

Are you gazing out over saltwater, or freshwater? Contending with a gnarly current, or a glassine, placid surface? When you’re trying to decipher a find, consider what’s most likely to live where you are. “Sandy beaches often have bivalves burrowed under the sand in very shallow water; rocky shores often have chitons, top shells, periwinkles, and limpets attached to the rocks in rock pools,” says Suzanne Williams, head of the invertebrate division at the Natural History Museum in London.

Physical features are full of clues. Start by tallying up the number of valves and shell parts. “Of the most common groups, gastropods, have one shell, bivalves have two, and chitons have shells made up of eight interlocking parts,” Williams says.

In general, tropical shells are more brilliantly hued than their freshwater counterparts, and cold-water shells—particularly those in intertidal zones along the coasts of Alaska, Siberia, Canada, or Greenland—would be dark or black as a way to conserve heat, says José H. Leal, science director and curator of the Bailey-Matthews National Shell Museum in Florida. “Deep sea shells also tend not to be very colorful,” Williams notes. The hue offers clues about how deep a shell might have lived, and where in the world it originated. All of this can make a shell more Googleable.

Be forewarned: You might spy different coloration on members of the same species. The Southern quahog, which washes ashore all across the Atlantic Coast, starts out spangled with white-and-brown zig-zags that look something like lightning, but these fade with age. Adults are duller, with more ho-hum patterns.

Some shells are stunners that are hard to mistake for anything else. The queen conch (Strombus gigas), ubiquitous across the Caribbean, has a famously pearly lip and ruffled edges. The spider conch, meanwhile, is armed with spiky protrusions, “like good old Edward Scissorhands,” says Leal. In both cases, this flair is a barometer of age. The queen conch stops coiling when it reaches sexual maturity; afterwards, the lip gets thicker while the innards stay the same.

By the way, while it’s easy to assume that bigger shells have probably been lingering in the water the longest, size isn’t always a reliable proxy for lifespan, Williams says. The giant clam, Tridacna gigas, is hulking even when it’s pretty young. The largest of these shells weighs more than 500 pounds, and even shrimpier specimens can grow as much as one centimeter per month in aquaculture facilities, Williams notes. The oldest of the long-lived Arctica islandica clams, on the other hand, has lived for more than half a millennium, but isn’t much more than 50 millimeters tall.

If you’re still stumped, compare your find to a visual encyclopedia that rounds up photos of shells around the world. Local park rangers or fish and wildlife officers will also have some ideas.

Plan ahead for next time

If you liked decoding your previous find and want to level up to more deliberate sleuthing, it helps to strategize a bit. Here’s how to maximize your chances of finding something:

Low tide will give you the best shot at spotting things freshly emerged from the water; you’ll also have easier access to things you’d otherwise have to root around for amid frothing waves. Before you set out, check a tide chart to see what window looks most promising for a treasure-strewn shore. Storms, and the waves that accompany them, might throw more shells onto the beach during the winter months.

Some especially enthusiastic collectors scour the beach with magnifying goggles, or strap on elbow and knee pads so that they can more comfortably squat down to scrutinize knobby heaps. If you’re not scouting for the rarest or smallest varieties (the tiniest shells are a shade smaller than a pinhead), you won’t need all of this. Instead, your kit should include the basics: at minimum, a bucket or a bag. A metal scoop or mesh sieve may come in handy, and spare you some pinches from any nearby crabs, whose nips can be “unsavory,” says Leal. You may also want a phone to crowdsource information about your find by posting an image of it to iNaturalist, an ecology tracking and identification app.

If you’re on the shore with a single-minded mission, it helps to break the terrain up into quadrants or focus on a specific section. On Sanibel Island, the shell wonderland where Leal works, piles can reach several feet high. You might up your odds of finding something if you tackle one small area and give it a close, careful look.

4. Take some home with you.

Of course, the lowest-hanging fruits de mer are the shells you can see with the naked eye. But it’s far from unusual to spot more after the fact, and with some assistance. Leal once returned home from a trip to Mexico, just south of Cancun, with two pounds of sand he’d collected from the bottom of a coral head. When he sifted these under a microscope, he discovered 120 shell species in the mix. You can approximate this at home: “I suggest that people take some shell-rich sand home and then go with a magnifying glass,” Leal says. (One caveat: Decamping with sand or specific shells might not be legal where you are—it’s illegal to harvest the queen conch in some places, for instance, for either fun or profit. Don’t be a scofflaw in pursuit of shell glory.)

Teach Yourself to Echolocate

A beginner's guide to navigating with sound.
insects

A guide to scouting for humble treasures on the shore of the Thames.
meteorites

It's a long shot—but if you're keen to look, here's how to start.
Video • PinDrop