Can a War of the Wasps Save Hawai‘i’s Wiliwili Trees? - Atlas Obscura
Want to see fewer ads? Become a Member. 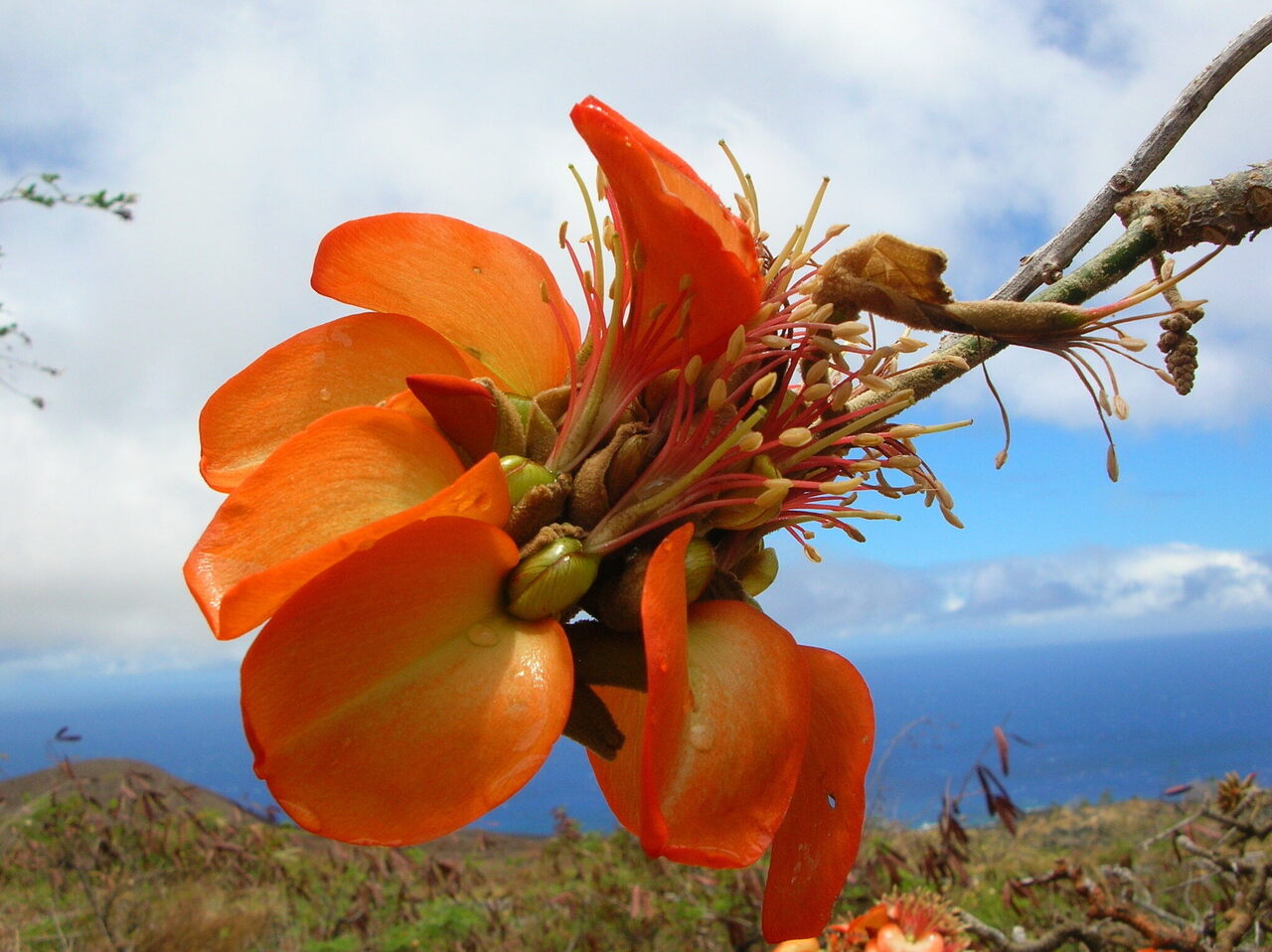 A wiliwili flower in full bloom. Forest and Kim Starr/CC by 2.0
In This Story
Destination Guide

In the summertime on Maui, the best place to see the sunrise is a chunk of ranchland in Kanaio, right off the side of the road. There, the sun doesn’t dwell in the sky, but in the forest, where hundreds of native wiliwili trees, also called Erythrina sandwicensis, erupt into bloom, with flame-orange petals unfurling from the tips of gnarled branches. But in 2005, this terrestrial sunrise began to fail. The wiliwilis were unable to bloom, their leaves forming strange cysts and their branches sprouting misshapen tumors.

Scientists soon identified a culprit, the erythrina gall wasp, Quadrastichus erythrinae, an incredibly tiny, incredibly invasive critter just a third the size of a mosquito. In 2008, after several years of testing, the Hawaii Department of Agriculture (HDOA) approved the release of a biocontrol agent, Eurytoma erythrinae. (Spoiler: It’s another wasp.) Researchers hoped the new wasp would feed on the larvae of the havoc-wreaking gall wasps. They performed their duty admirably, and soon the wiliwilis began to show signs of recovery. But Eurytoma had a serious blindspot: It only targeted the biggest gall wasp larvae, leaving behind the smaller ones to continue infesting the trees’ seed pods, flowers, and seedlings. The adult wiliwilis had regained their health, but were producing infested, sterile seeds, dooming future generations. Luckily, the HDOA noticed this trend soon after the release and has a new solution. Spoiler: It’s another wasp. The agency’s new biological control plan is open for comments until January 22, according to Maui News.

It seems impossible for a wasp as small as a mote of dust to fell a tree, but the gall wasp has a trick up its sleeve. The insects inject their eggs into the wiliwili’s tissue. As the larvae feed, the tree’s leaves crinkle and deform, or the flowers shrivel, or the seeds stay green and sickly. These deformations, called galls, act as cocoons for the larvae, and when they stunt the leaves, they also prevent the tree from taking in light or releasing water. “The trees release water through their leaves, so if they can’t produce leaves, they can’t release water,” says Lissa Strohecker, a specialist with the Maui Invasive Species Committee. “And the [trees] would grow so heavy, they would rot from the inside.” Fourteen days later, the larvae hatch and the cycle begins again.

It is a mystery how the gall wasp got from East Africa to Hawaiʻi, but scientists suspect it was a stowaway, with a stopover in Taiwan, according to Darcy Oishi, a biological control section chief with HDOA. The question of how the wasp wound up on the islands was far less pressing than finding a way to control it. To accomplish that, for an insect almost too small to see, the HDOA needed a helper of similar stature.

For Hawaiian scientists, biocontrol begins on Google. “It starts with a lot of internet-based sleuthing and going through museum records to generate a real rough sketch of what we want to do,” says Oishi, who was involved with the first control wasp release. “Then we complete the picture by going out into the field.” The HDOA pinpointed East Africa, which has Erythrina trees related to the wiliwili. The logic was that if there are Erythrina trees there, there are gall wasps, and if there are gall wasps, there are things that eat gall wasps. The department sent exploratory entomologist Mohsen Ramadan and a team from the University of Hawaiʻi to several countries in East Africa to find this natural enemy.

In Africa, the researchers met with local entomologists, pored over insect collections, and ventured into the field, Oishi says. Luckily, it wasn’t a wild wasp chase. In Tanzania, Ramadan saw very few leaves with obvious galls, according to a 2006 story in the Honolulu Advertiser. There were gall wasps there, but something was keeping them from truly infesting the trees, and that something could help Hawaiʻi protect its own.

Ramadan collected what gall leaves he could find, with the idea that they likely also held whatever species was preying on the gall wasp larvae. The researchers brought them back to the United States in an inconspicuous carry-on, Oishi says. The infested, tumored leaves went into a cloth bag, and then into a screened plastic container, then into a larger bag, then into a styrofoam cooler, then into a box, and then a larger box—around the size of an end table. “We do a better job of packing than Amazon,” Oishi says. If you flew some leg of the route from Tanzania to Oahu in 2006, you might have shared a commercial jet with dozens of wasp larvae.

In Oahu, the leaves were taken to a quarantine facility, where researchers waited to see what emerged. “If you dissect them, you can see the larvae and confirm the leaf is being parasitized,” Oishi says, “but once you break open the gall, you can’t recover the insects.” Sure enough, wasps emerged—27 females and 17 males. After photographing the insects with a scanning electron microscope, the researchers saw that they were not gall wasps, but a new species of Eurytoma that apparently parasitizes the larvae of gall wasps. The adult wasps were taken to a nearby facility. “We needed to create a wasp factory to get the thousands of wasps we would need for the environment,” Oishi says.

Amid a bacchanal of wasp copulation, the researchers began exhaustive tests to see how the Eurytoma wasp interacted with native species. It would be a shame to control the gall wasp, only to encounter unintended consequences. The newcomer raised no red flags, and in two years—a split second in the world of biocontrol bureaucracy—Eurytoma was approved for release in Hawaiʻi. The first release took place in the Liliuokalani Botanical Gardens in Honolulu, where 500 lab-bred specimens swarmed a gall-covered wiliwili. State biologists released more than 8,000 individuals in total, on Oahu, Maui, Kauai, Molokai, and Hawaiʻi. Within months the wiliwilis showed signs of recovery, according to Maui News. In 2010, two years after the initial release, 60 percent of young wiliwili shoots were free of damage. By 2011, 90 percent of the targeted wiliwilis had regained their full, leafy glory. “The wasp is so tiny, you don’t see them, but you see their effects,” Strohecker says.

But all was not well. The leaves looked better, but the trees’ flowers, seed pods, and seedlings were still infected. Studies revealed that 54 percent of wiliwili seeds were not viable due to a gall affliction, according to Maui News. The scientists saw how Eurytoma, for all its diligence, preferred larger galls and left smaller ones untouched. Following the line of reasoning that got them that far, they figured they needed an even smaller wasp.

Eurytoma is already pretty small—just 2 millimeters—but then there’s Aprostocetus nitens, at just 1.1 to 1.7 millimeters. This was another species that flew commercial from Tanzania to Oahu in 2006, but its testing lagged behind, Oishi says. It’s potential to target smaller, seed-bound galls is great. It’s also resilient, with a lifespan of 101 days (compared to Eurytoma’s 40). And it can survive without food for four days and reproduce without a male. The HDOA has just finished testing its interactions with native species as well. “We’re confident that there won’t be nontargeted effects,” Oishi says.

If everything goes off without a hitch, Oishi predicts Aprostocetus might be seen (though not by any human eye) buzzing around wiliwilis in two years. But, he cautions, biocontrol never has a strict timeline, as the process reshapes ecosystems to, hopefully, establish a new balance of order. “Once we release it into the environment, there’s no going back,” he says. “Almost like Thanos snapping his fingers with the Infinity Gauntlet.” According to Strohecker, locals have been alarmed when they hear that the government is releasing a wasp (perhaps not realizing just how small and non-stingy they are). “But it only goes after its target,” she says. “That’s the rule.”

The goal for any introduced biocontrol agent is to limit its target, not eradicate it. “There’s a common thought that when we release a biocontrol agent it will kill off the host, and it doesn’t,” Oishi says, adding that when the population of gall wasps drops, the population of released wasps will, too. Sometimes, Oishi wonders about what these engineered ecosystems will look like in the future. “A million years from now, these natural enemies will have evolved, but they will have evolved together,” he says.

Until the great wasp hope buzzes onto the scene, the wiliwilis will be under tight watch by conservationists. Only three percent of Maui’s original dryland forest, the wiliwili’s sole natural habitat, survives. The wiliwili also holds great cultural importance for Native Hawaiians, who harvested its wood for surfboards and outriggers, and its seeds for leis, according to the Bishop Museum. And the flowers were traditionally used to treat venereal disease. On Maui, the largest populations of wiliwili are scattered around, but the easiest place to see them, Strohecker says, is the road by Kanaio, where the adult trees have mostly recovered and are bursting into fiery bloom once again. Hopefully, the seeds will follow them out of the dark night of wasp infestation—thanks to two other wasps, of course.

A grassroots group is creating a living library of these backyard gardens.
cemeteries

Have You Seen Britain's Tiny Potential Tree-Killer, the Adorable Spittlebug?

They're kind of cute, but also carry a plant disease.
objects of intrigue

More than functional, these fleshy fruits developed into a striking art form.
List

1:32
Want to see fewer ads? Become a Member.
From Around the Web
Atlas Obscura Trips
Science After Dark: Spotting Squid in the Tides of Oahu
View This Trip
Thanks for sharing!