The Curse of the Viking Sally, the Baltic’s Most Ill-Starred Ship - Atlas Obscura
Want to see fewer ads? Become a Member. 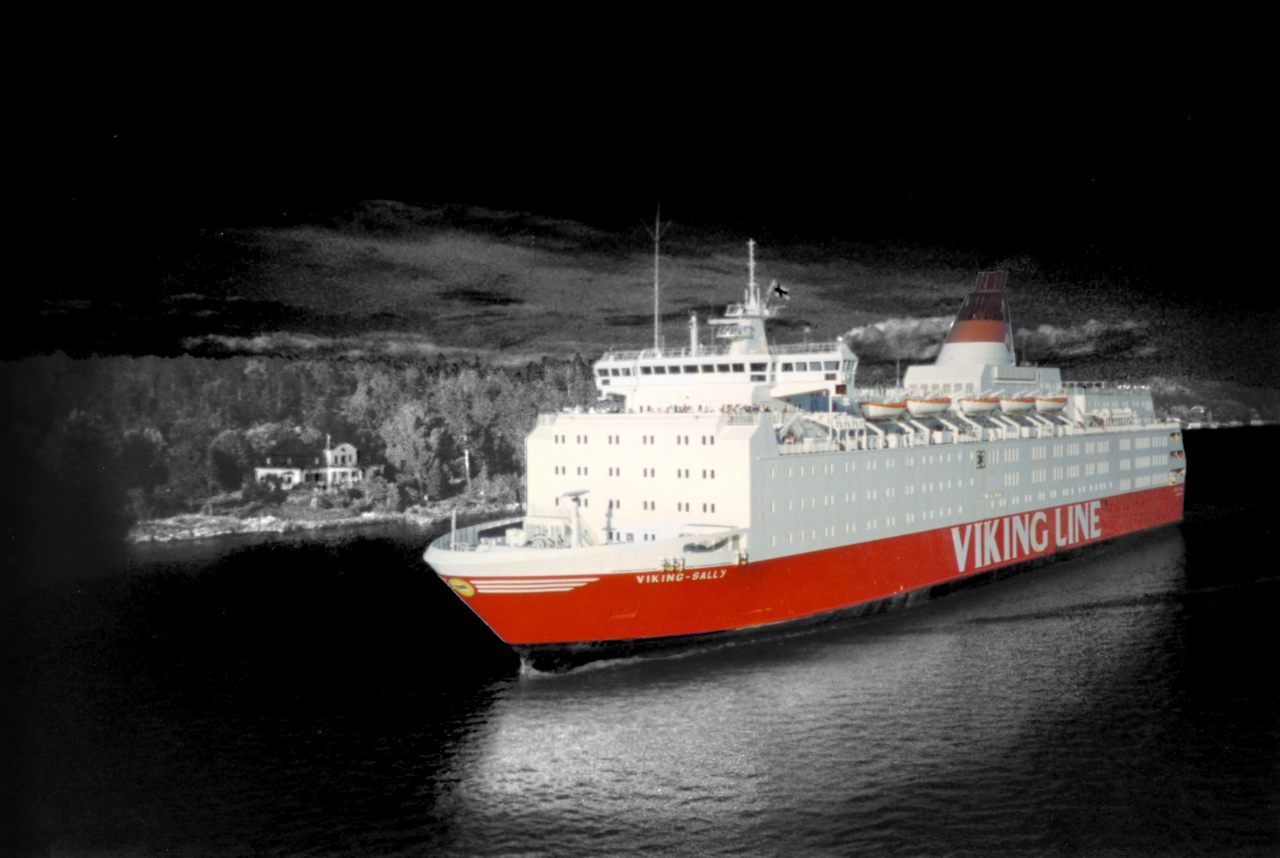 The ship first known as the Viking Sally was once a floating pleasure palace, part of the Baltic's "cruiseferry culture." Finnish Heritage Agency

A powerful low-pressure system moving east from Norway brought sheets of icy rain, strong winds, and 20-foot waves to the Baltic Sea on the evening of September 27, 1994. The Estonia had left her home port of Tallinn 15 minutes behind the scheduled 7 p.m. departure, and now she was slicing through the murky, frigid waters at maximum speed, her engines pushing the 510-foot ship hard as the crew tried to make up time for the morning arrival in Stockholm.

As the ship pitched in heavy seas, some of the passengers who had not retired to their cabins with seasickness were enjoying all the Estonia had to offer. Her nine decks included three restaurants, three bars, a casino, a movie theater, a swimming pool and sauna, a duty-free shop, and a video arcade. She was a floating pleasure palace offering daily round trips between Estonia and Sweden.

Just before 1 a.m., a loud metallic sound reverberated throughout the ship. Panic ensued as the Estonia listed heavily to her starboard side. Less than 40 minutes later she capsized and sank, taking 852 people with her.

The sinking of the Estonia stands as the second-worst European peacetime disaster at sea, after the Titanic. That alone would consign her to maritime infamy. Yet compounding her tragic legacy, the Estonia began service 14 years earlier as a Finnish ship with a different name, one that resonates as the most notorious that has ever sailed the Baltic. Two brutal onboard murders occurred a year apart, one of which remains unsolved. This is the story of the curse of the Viking Sally.

Given its extreme location in Northern Europe, Finland might as well be an island. Its maritime history dates to the Iron Age, when settlers in the West Coast city of Turku began sending goods along the Baltic trade routes.

Ever since, Baltic shipping lanes have served as an economic lifeline to the rest of the world. In the late 1950s, entertainment became part of the industry with the birth of the “cruiseferry” business: Competing companies offered cruise ship-style amenities on vessels that previously hauled only cargo, giving rise to Baltic cruise culture. Soon, the popularity of overnight pleasure trips to Stockholm soared, along with shorter voyages to Estonia and Mariehamn, capital of the Åland Islands, an archipelago between Finland and Sweden.

In 1980, the Finnish Viking Line purchased a vessel from a German shipyard and christened her the Viking Sally. Compared to others operating at the time, she was built larger to accommodate more passengers and vehicles. Her bow had an upswinging visor that opened for a car ramp, which retracted when the visor closed.

Painted in the company’s distinctive red and white colors, she made daily trips between Turku and Stockholm, with a stop in Mariehamn. Up to 2,000 passengers could gorge on buffets, drink in the bars, and load up on duty-free merchandise.

She sailed without incident for six years. Then, on July 10, 1986, Reijo Hammar boarded the ship. Hammar and a female accomplice met Finnish businessman Antti Eljaala in one of the bars, and later accompanied him to his cabin. Hammar robbed Eljaala, stabbed him in the neck five times with a dinner knife, and strangled him with a bedsheet. Hammar was able to disembark before the murder was discovered, but was later captured and sentenced to prison.

A year later, West German students Klaus Schelkle, 20, and Bettina Taxis, 22, planned a shoestring-budget trip through the Nordics. They boarded the Viking Sally on July 27, 1987, in Stockholm, deciding to rough it outside overnight.

They spread their sleeping bags on the heliport, settling in for the evening. At about 3:45 a.m., several Danish Boy Scouts discovered the bloodied couple, who had been savagely attacked. They were airlifted to a Turku hospital, where Schelkle died. Taxis survived but had no memory of the incident and was unable to assist police.

“It was very savage and cruel, shocking in its level of violence,” says Matti Tolvanen, law professor at the University of Eastern Finland. “It was exceptional for Finland in that a murder by a complete stranger, without any motive, is very rare.”

One of the Boy Scouts, Thomas Nielsen, was the first person to alert ship authorities. He told police he tried to help the couple and was lauded as a hero. Finnish police interviewed more than 1,000 people on the ship, but no one was arrested, and the case went cold for nearly 30 years.

Then, acting on a tip from a Danish jail where Nielsen had spent about half his life for various crimes, Finnish police formally interviewed him for the first time. During a break in the proceedings, he allegedly confessed to one of his interviewers, and Nielsen went on trial in Turku in 2021. But because of a technicality—the confession occurred without a lawyer present—he was found not guilty.

The prosecutor appealed the verdict, but in August a Turku court upheld the decision to prevent the confession from being used as evidence. It’s unclear whether the case has ended or if it will be referred to the Finnish Supreme Court.

The Viking Sally changed hands and names several times in the early ’90s—a common pattern for ships of its type—and eventually was purchased by Estline, a shipping company with routes between Tallinn and Stockholm. Repainted blue and white and rechristened Estonia, she was the largest Estonian-owned ship at the time, the pride of a country that regained its independence in 1991 with the collapse of the Soviet Union.

On the night it sank, strain from high waves caused the bow visor to separate from the ship, allowing water to flood into the vehicle deck. The crew was faulted for pushing the Estonia too hard through the storm, and failing to realize the cause of the list.

“It was a great shock,” said Pauli Kivistö, curator at Forum Marinum, a maritime museum in Turku. “Many who experienced this can still recall where they were when hearing the tragic news.”

Susann Blomqvist-Söderling was a nurse in Hanko, Finland, when the Finnish Coast Guard began delivering some of the 137 survivors to her hospital that morning. “When it dawned on them how few of them survived, it was devastating,” she told Finnish media. “We all had a hard time comprehending the magnitude of the disaster.”

For a while, says Kivistö, the tragedy also changed cruiseferry culture, reducing interest in sea travel. As for Hammar, the man behind the 1986 murder, he went on to even greater infamy. He escaped from prison, shooting a guard and killing an accomplice in the process. Hammar then robbed several banks and stabbed someone else, nearly killing him, before landing back in prison. Despite his violent crimes, he was eventually paroled and is believed to still be in Finland. Nielsen, 53, who now goes by Herman Himle, remains free in Denmark. And the ill-fated ship lies about 250 feet beneath the Baltic, 22 nautical miles from the Finnish island of Utö.

“I’m by no means the kind of person who sees dark omens in events,” wrote journalist Miika Viljakainen, who coauthored a book on Finnish crime. “But it’s a startling coincidence that all this happened on Viking Sally, on a ship better known by its later name, Estonia.”

Monsters Are Everywhere in the Bible—And Some Are Even Human

There's more to this 19th-century crime than the dark side of fairy lore.
murder

The Unsolved Murder That Haunted a Beloved Italian Poet

A stirring mosaic marks the spot where Ruggero Pascoli was killed in 1867, shaping his son Giovanni's prolific art.
murder

Join us for a daily celebration of the world’s most wondrous, unexpected, even strange places.
murder