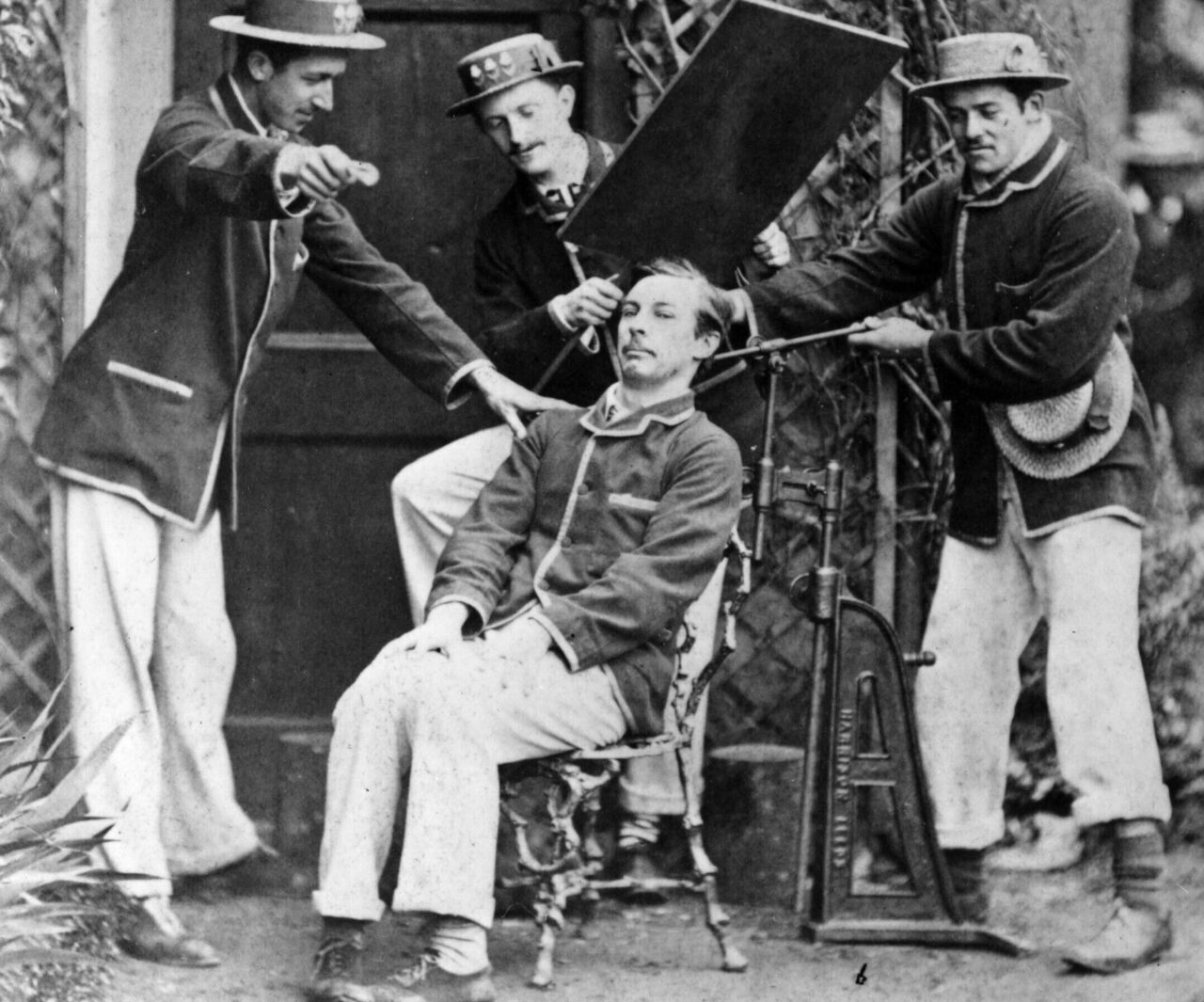 A sitter is clamped into position using a metal frame before having his portrait taken. Hulton Archive/Getty Images

Victorian England had a unique relationship with death. Because Victorians died young, died quickly, and died of injuries and infections modern medicine helped abolish, they invented elaborate grieving rituals to give meaning to their loved ones’ ephemeral lives.

All of this happening at the same time as advances in photography led to the prevalence of postmortem photos, where Victorians would haul out their dead, prop them up on stands, and take a picture worth a thousand words. These stands helped corpses look alive, and allowed them to be posed with their still-breathing family members. Or so the story goes.

Fake postmortem photos, whether categorized in error or intentionally mislabeled to sell for profit, have in recent years become widespread on the Internet. They fill online galleries of Victorian oddities and accumulate on Pinterest and Instagram—even otherwise reputable websites have contributed to the myths. Though unfortunate, it’s also understandable: There’s clearly something compelling about a lurid, not-so-distant culture engaging with death in a way we don’t.

In truth, the propped-up people in Victorian “postmortems” look alive for a much simpler reason: They are.

Posing stands were used to help living models hold still for that era’s longer exposures, though even that is misleading. “[Long exposure] is a deceiving term,” says Mike Zohn, a longtime photographer and the owner of Obscura Antiques in New York. Initially, he explains, exposure time could be half an hour or an hour—but this was for landscapes, never for portraiture. By 1839, when the daguerreotype was invented, the longest exposures were a minute and a half. By the 1850s, they were three to eight seconds.

“When people talk about long exposure, it sounds like people had to wait for half an hour,” Zohn says. “They did not. But an exposure of even one second is long enough to allow for blurring. So they had posing stands.”

According to the website Viralnova, they also had posable corpse arms. In a post ostensibly showing Victorian postmortem photos, number eight on the list is an image that has been passed around many corners of the Internet—Viralnova quotes the photo source as Tumblr. In it, a man reclines in a chair, his face resting on his hand. “Notice the way the photographer has positioned the man’s arm in order to support the head?” the author asks. The photo is of author Lewis Carroll, taken years before he died.

Other so-called postmortems are often assumed to be of dead people because something seems “spooky.” Too-stiff posture, unnatural-looking eyes, or eerie shadows can easily start a photo’s postmortem career, and much of this supposed evidence is, again, just evidence of an older photography system. Earlier chemical processes made colors appear differently (blue eyes could come out as white) and exposure might leave limbs dark in order to make the face clear.

Posing stands, Zohn explains, are similar to microphone and guitar stands. Though they’re made of cast iron, they’re not particularly sturdy or heavy, weighing perhaps 20 or 25 pounds. More damningly, they’re not counterbalanced. “They weren’t made for or sturdy enough to actually hold up the weight of a dead body,” Zohn says. If you set a corpse—rigor mortis would have needed to set in just the right way—on a posing stand, it would certainly topple over.

An intriguing thing about the spread of Victorian-era death myths is that they are not ancient history. The 1800s are not so far away; patent descriptions, images, illustrations, and catalog ads from that era can tell us everything from how Victorians actually cared for their dead to practices and inventions in photography. An avid photographer himself, Zohn researched Victorian records so that he could make his own ambrotypes and daguerreotypes. When it came to posing stands, “not a single bit of it mentions anything about dead people.

Zohn talks about a 2009 film called The Haunting in Connecticut, which perfectly shows how a good story spreads with a little help from capitalism. The film’s postmortem photos appeared Victorian but were taken specifically for production to prevent moviegoers from contacting the studio and demanding money, claiming to be the descendants of the people in the photos. Some of these very photos, Zohn says, are now circulating on the same blogs and listicles that claim stands were used to hold the dead.

“The same thing happened with postmortems that did with tear catchers,” says Christian Harding, one-time owner of The Belfry oddities store in Seattle. “People want to create a fake history and to believe it.” They also want to profit from it: Postmortems earn a pretty penny on both eBay and Etsy, and the majority of collectors are not going to consult a patent library before clicking the buy-it-now button. Even worse, the more misinformation there is online, the likelier it is that someone’s “research” will turn up myths rather than facts.

“As simple as it sounds,” Zohn says, “the big general rule is if they look alive—they’re alive.”

"I have seen my death!"
victorian

Grave robbing got more hazardous in the 1880s.
taxidermy

Clues to who the 19th century Frenchman was can be read on his unusually preserved remains.
caves

Innovative photographers James and Lucy Lo created a time capsule of a sacred space at a vulnerable time.
Video