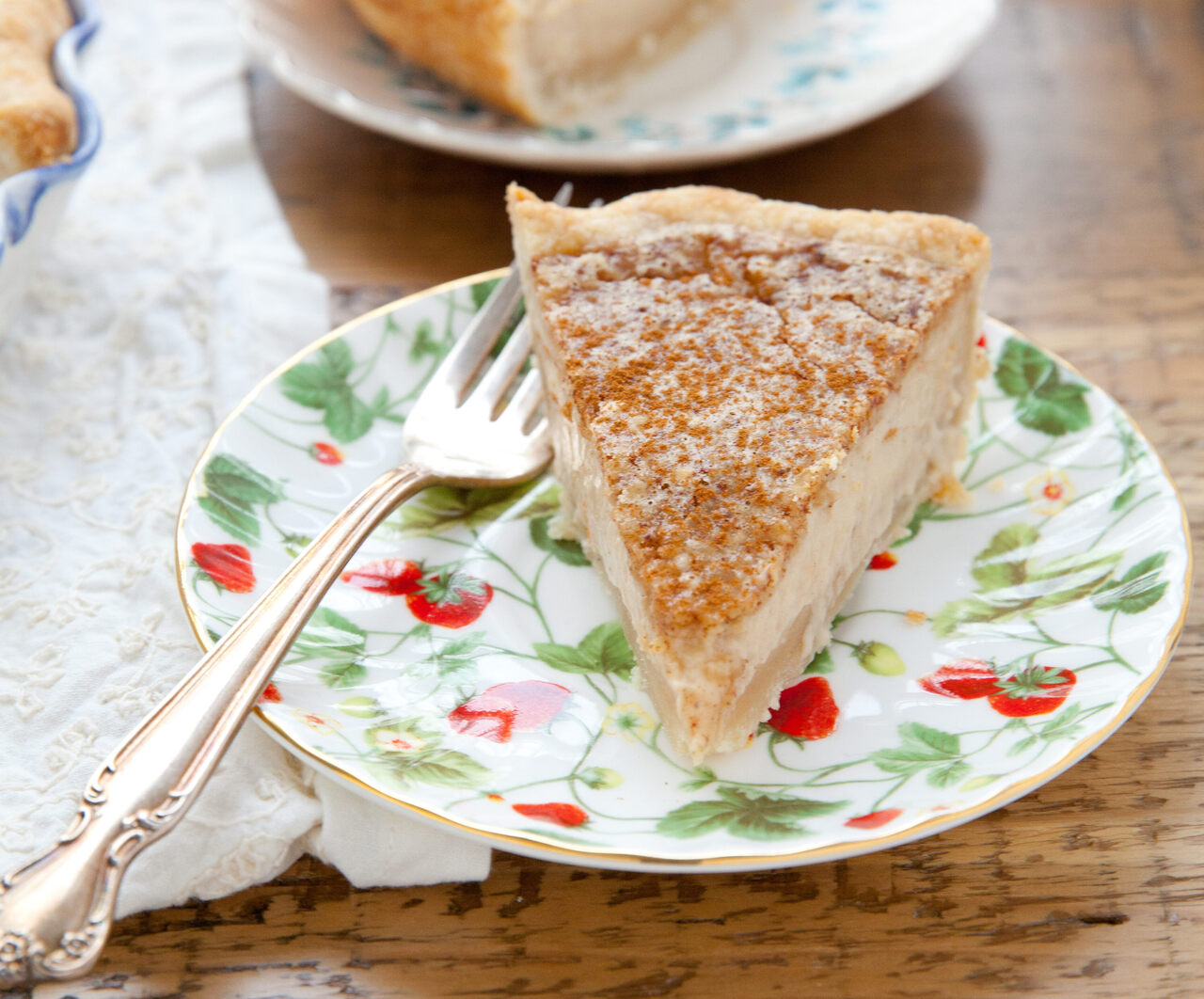 You probably have the ingredients for sugar cream pie in your kitchen. Annie/CC BY-ND 2.0

To limit grocery-store trips during social distancing, many home chefs are looking for ways to use every last bit of what’s in their cupboard or refrigerator. The COVID-19 pandemic may feel like uncharted territory, but history is filled with examples of cooks getting creative in times of hardship. From the crispy burger born during the Great Depression to the simple delights of “desperation pies,” here are seven delicious dishes born from tough times that you can make at home. Most involve ingredients that you can find in your kitchen.

As you find yourself stretching packs of ground beef, consult the “meat extending” techniques of the Great Depression. When hard times hit the greasy spoons of the American South, restaurant owners supplemented their thinning patties of ground beef or pork with potato flour. Fried, topped with mustard, and slid between buns, the resulting “slugburgers” had perfectly crisp exteriors that gave way to the juicy meat inside. Despite the name, they didn’t contain any slithery creatures. One theory says the snack’s moniker was a reference to counterfeit coins, known as “slugs,” implying that the burger was a sort of culinary impostor.

Today, line cooks tend to use cornmeal, soybean meal, or even crumbled sandwich bread instead of potato flour, and add toppings such as cheese, onions, and pickles. Try this recipe from the slugburger’s alleged hometown of Corinth, Mississippi, and swap in whatever starch you have. Be sure to open windows or turn on the ventilation hood above your stove while you’re frying.

Food shortages in the former Soviet Union forced canteen managers and home bakers to employ some innovative upcycling techniques. This was especially true in industrial kitchens that had to carefully record how their supplies were being used. Since no crumb could go to waste, they were worked into new dishes, such as kartoshka.

Kartoshka means potato, but there are no tubers in these treats. Instead, they consist of cookie or cake crumbs that have been glued together with butter, sweetened condensed milk, and cocoa powder, then pressed into the shape of a little potato. If chefs had extra ingredients, they often added some rum, cognac, or flavored liqueur to the mix and topped it with nuts or frosting before throwing the treats into the fridge to set. Try this recipe or look for others that match the kind of crumbs you’re working with.

With a recent shortage of yeast in grocery stores, there’s no better time to experiment with this recipe used by 19th-century Appalachian pioneers. Salt-rising bread does not require yeast to rise. Instead, bakers cultivate bacteria in their starter by leaving a mixture of boiled milk, cornmeal or wheat flour (and, sometimes, a sliced potato), sugar, and salt out overnight in a hot environment. The resulting microbes create hydrogen, which serves as the leavening agent. Thanks to its bacterial beginnings, some say the final, baked loaf smells of dirty feet. But others note a distinctly cheesy aroma along with a smooth texture. That unique quality has won the bread fans who work to preserve the disappearing culinary tradition.

One such fan was James Beard, whose recipe for salt-rising bread incorporates potato and appears in Beard on Bread. If you don’t have a potato, but do have cornmeal for your starter, try food-science writer Harold McGee’s version. Making salt-rising bread can be unpredictable and challenging, so don’t be discouraged if it doesn’t turn out right on your first try.

Part of the category of thrifty treats known as “desperation pies,” this simple dessert was popular in the Shaker and Amish communities of Indiana in the early 19th century. Desperation pies relied on non-seasonal ingredients that families almost always had in the pantry, and sugar cream pie was no different. Most kitchens stocked the key ingredients of sugar, cream, butter, vanilla, cinnamon, and flour. As a result, the pie was a reliable year-round fixture at church gatherings. Thanks to its easy recipe and milky-sweet flavor, it rose in popularity across the Hoosier state, eventually becoming its unofficial pie. The Cafe Indiana Cookbook offers a few different recipes, one of which swaps in a can of evaporated milk if you don’t have cream. If you need to whip up a crust, try this quick recipe.

Food scarcity was rampant throughout and after the Korean War. To get cheap protein, some Koreans took to lining up outside U.S. army-base mess halls to purchase leftover food, which would otherwise be thrown out. The leftovers were often salty, heavily processed foods, including hot dogs, ham, Spam, canned beans, and processed sliced cheese. To this, home cooks added their own kimchi, garlic, vegetables, chili paste, and instant noodles. The resulting spicy, savory mixture came to be known as budae jjigae, or “army base stew.”

Though it has its roots in resourceful survival, budae jjigae has since grown into a beloved comfort food in South Korea. Many of its ingredients may already be leftovers lurking in your fridge or cabinet, just waiting to be used. Try My Korean Kitchen’s recipe for the stew.

The Peanut Butter and Mayo Sandwich

While many households in the United States have these two condiments on hand, rarely do they find themselves in the same sandwich. But Depression-era families found the fatty, protein-heavy combination to be a cheap way to fill up. Even in the decades after the economic crisis, fans stuck with the caloric combo. As late as the 1960s, a joint Skippy Peanut Butter and Hellmann’s Mayonnaise advertisement proposed new toppings to the beloved sandwich. Depending on your inventory, you can make a few of the ad’s options. Try the “Double Crunch,” which adds bacon and pickles; the “Apple Fandango,” with sliced apples and marmalade; or, if cabin fever’s really starting to get to you, the “Crazy Combo,” with salami, sliced eggs, and onions.

Like kartoshka, this Soviet-era treat combines crumbs into a towering confection that resembles an anthill (or, in Russian, muraveinik). Take any leftover bread or pastry—cookies, cake, shortbread, biscuits—crumble it all up, then bind the pieces together into a mound with a mixture of softened butter, sour cream, and boiled sweetened condensed milk. Some cooks mix in chocolate or crushed nuts for added texture. Try this no-bake recipe that takes 10 minutes.

Do you know of any other dishes we missed? You can join the conversation about this and other stories in the Atlas Obscura Community Forums.

Is Saint Corona a Guardian Against Epidemics?

When the going got tough, the tough left recipes.
food

Bake an old-timey cake from this handwritten cookbook.
food

Meet 'Moose Milk,' the Wintry Cocktail of the Canadian Military

Knock out the year with an elixir that can pacify an army.
food

My Hunt for the Original McDonald's French-Fry Recipe

Veteran line-cooks, experts, and die-hard fans tell the story of the fries that birthed an empire, then disappeared—until now.
Video • Gastro Obscura

"As a vanquisher of men its equal has never been found."
Gastro Obscura

For every crisis, a recipe.
Read more
Thanks for sharing!