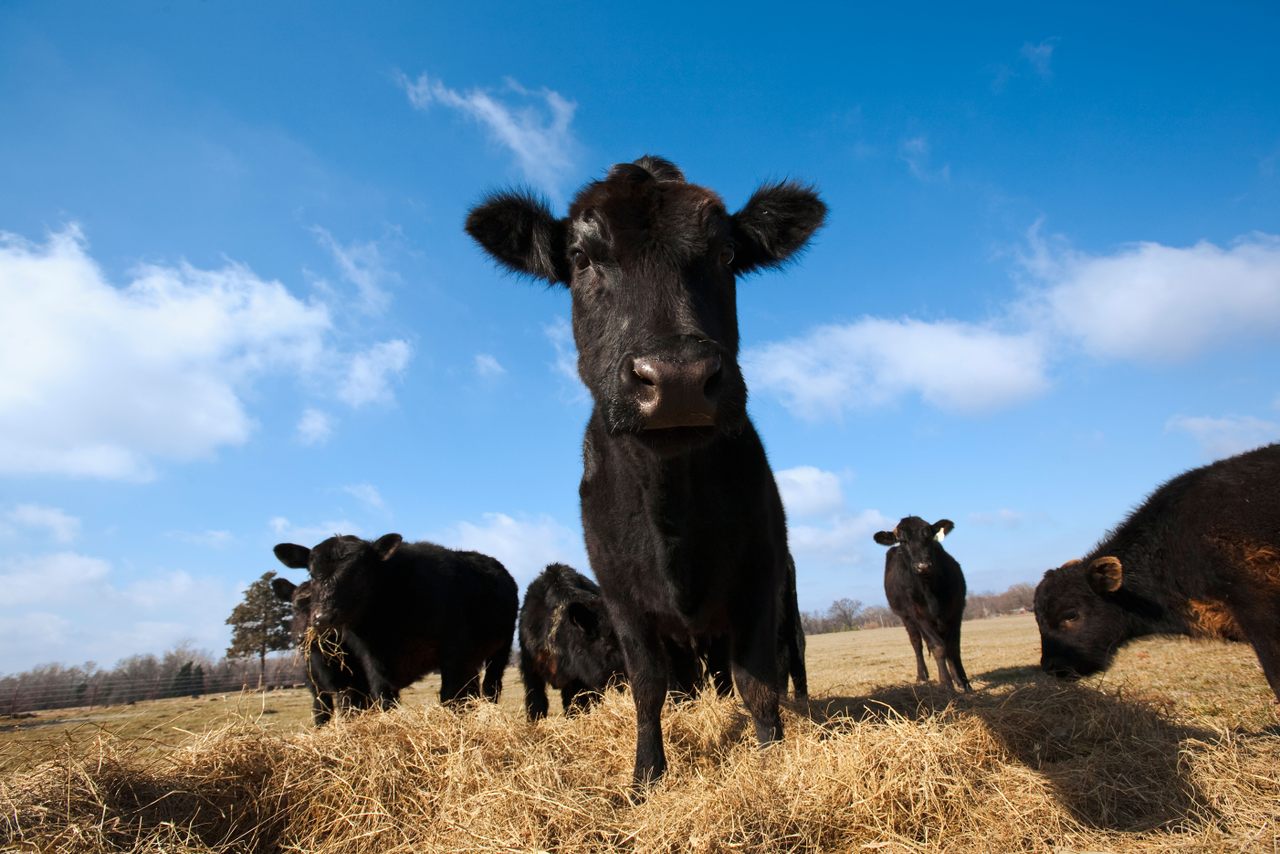 Angus cattle, such as these in Arkansas, are among the varieties of livestock and farmed aquatic animals preserved in the livestock gene bank. Design Pics Inc/Alamy Stock Photo
In This Story
Destination Guide

You can’t just wander around the beige building: Access to the National Laboratory for Genetic Resources Preservation requires a guided tour, booked in advance. But close your eyes and try for a moment to picture it: A large, clean, secure room full of dozens of gleaming, cylindrical metal tanks, about waist high and five-and-a-half feet in diameter. They’re so cold that scientists must wear thick, elbow-length blue gloves to open them, and when they do, the liquid nitrogen inside boils to the surface. “We’re often looking through vapor,” says animal geneticist Harvey Blackburn.

This space is part of the Agricultural Research Service complex in Fort Collins, Colorado. Though it’s dedicated to animals, including bleating sheep and methane-belching bovines, you won’t find any there. But they’re present in genetic spirit. That tank-filled room is the world’s largest stockpile of livestock semen.

If you have a sound reason to need a bit of semen from, say, a boar or a honeybee or a sheep or a catfish or a yak, chances are good you’ll find your way to Blackburn or one of his colleagues. Together, they’re the custodians of all of that fluid, in addition to testicular tissue, embryos, ovaries, blood, and more—amassed by the National Animal Germplasm Program (NAGP), and anchored in the United States Department of Agriculture (USDA) Fort Collins compound. There, a bit of semen from a Duroc boar recently nudged the facility’s overall sample count to one million—952,127 of which are semen and sperm, specifically—from domesticated livestock and farmed aquatic animals, spanning 167 breeds and 36 species.

Like seed banks, this cache of organic material is a high-tech Noah’s Ark—insurance against worst-case scenarios. Its contents could help revive populations of critical animals obliterated or stressed by, say, a natural disaster, climate change, or a quick-moving infection. But the collection has other uses, as Blackburn and P.J. Boettcher, of the United Nations’ Animal Production and Health Division, outlined in a 2010 paper about best practices for stashes of animal genetic material. “The release of genetic resources from the gene bank need not be only in the case of crisis situations,” they wrote. “It is totally feasible for semen, embryos, or DNA to exit the repository for routine breeding and research activities.” As such, the NAGP team released about 7,000 samples to breeders or researchers who want to use them for various projects, including increasing the genetic diversity of a given flock or reconstituting a line of pigs used as research subjects.

Concern about the genetic diversity of livestock started to percolate several decades ago. The USDA joined the discussion in the 1990s, and the NAGP was formed in 1999. Gene banks have really taken off since the turn of the millennium, and were resoundingly endorsed by the branch of the United Nations dedicated to global food and agriculture. A 2015 report from the Food and Agriculture Organization of the United Nations found that the share of the world’s livestock breeds at risk of extinction had edged up in the previous few years, as a result of “genetic erosion,” land-use patterns, and more, according to a release. Additionally, more than half of all livestock breeds faced uncertain risks, the report’s authors wrote, because data about their populations are scarce. Now there are more than 120 livestock gene banks across the world. The USDA’s is the largest, Blackburn says, followed by ones in the Netherlands, France, and Canada.

These reserves must be cautious caretakers. Since different countries face different biological foes, they’re not necessarily trading a lot of samples. Importing samples to the United States from any other country requires permits from the USDA’s Animal and Plant Health Inspection Service and a clean bill of health for the contributing animal, Blackburn says. When banks do swap samples across borders, one in the United States would be much more likely to work with one in Canada, as both are similarly freaked by highly contagious foot-and-mouth disease (and therefore make sure it doesn’t get into their facilities), Blackburn says. On the other hand, neither would be likely to receive a permit to accession a sample from a bank in an area that has been affected by African swine fever. That virus has ravaged pig populations in Brazil, Russia, China, and elsewhere, and no one wants to see it stampede across North America.

Samples arrive at the NAGP facility in several ways. Back in 2004, ABS Global, a Wisconsin-based company that artificially inseminates livestock, donated 200,000 decades-old semen samples from more than 6,000 bulls representing 43 breeds. Sometimes, the NAGP researchers go looking for sheep or goats they want to add to the inventory, and collect and freeze their samples out on a farm. For boars, they have relationships with several stud operations in the Midwest, which are able to get them fresh samples within 36 hours.

When a fresh sample arrives, the team gives it a once-over—temperature, pH, sperm motility—and then cools it into a state of suspended animation. The scientists take a boar sample, for instance, from the transport temperature of 59 or 62 degrees Fahrenheit (15 or 17 degrees Celsius) down to 41 degrees Fahrenheit (5 degrees Celsius), and package it in ½-milliliter straws that look a bit like cocktail stirrers. (One sample might require several of them.) These are then cryopreserved in liquid nitrogen; they get really cold, really fast. A boar sample hits -220 degrees Fahrenheit (-140 Celsius) in about three minutes. By the time it goes into long-term storage in the tanks, it’s down to -322 degrees Fahrenheit (-197 Celsius), where it will keep almost indefinitely. “There’s not going to be deterioration of the quality of the cell,” Blackburn says. “By storing them at the temperature we do, they should last 1,000 years,” he adds. “Once we have ‘em, we pretty much have ‘em.”

Every week, staffers just have to top off the liquid nitrogen. Each tank—spacious enough for 120,000 straws—holds 2,000 liters. “As long as the tank is in good condition and the right temperature, you don’t have to do anything else,” Blackburn says.

Removing a sample, though, is an exercise in precision and precaution. First, the scientists spin a kind of lazy Susan to access the right part of vat. They use two-foot-long tweezer-like tools to pull the chosen canister from the liquid nitrogen, then transfer it to a Styrofoam box with a splash of liquid nitrogen inside. They then reach for a finer-scale set of tools to pluck the specific straw. Once the sample is thawed, it’s ready to go—but can’t go back. “Viability goes down substantially if we freeze, thaw, and try refreezing again,” Blackburn says.

Blackburn estimates that the NAGP gathers between 20,000 and 25,000 new germplasm samples a year, mostly in an effort to stay up to date with the current genetic diversity across breeds and species. The USDA researchers collaborate with thousands of partners across the country to figure out where genetic change is happening most rapidly, and that tends to track with how long it takes a certain breed or species to reach sexual maturity. According to Daniel Buskirk, a beef specialist at Michigan State University, Angus bulls are usually bred from the time they’re 18 months old until they’re four or five, at which point they’re replaced to keep the herd genetically healthy. For pigs and chickens, Blackburn says, new generations emerge in much less time.

This means that despite the general stasis of the collection, the researchers are always on the hunt for fresh samples. The task is unrelenting. The NAGP storage area currently holds about 60 tanks; there’s space for 200 more. “In the facility, we have a whole floor we haven’t even started to use yet,” Blackburn says. So, for now at least, they’ve got room to grow.

“The whole idea is to have genetic resources that are usable to any range of needs that the country may have,” Blackburn says. As long as there’s a livestock industry in the United States, the scientists in this Colorado complex will keep adding to their collection.

On Restaurant Day in Helsinki, Anyone Can Open an Eatery, Anywhere

A surprise discovery from Haiti may finally reveal how some famous feral horses got to a distant barrier island.
science

How Cows Destroyed an Entire Marine Ecosystem in California

A researcher's quest to understand a mysterious mass extinction leads to cud-chewing culprits.
Want to see fewer ads? Become a Member.
From Around the Web
THE GASTRO OBSCURA BOOK
Taste the World!
An eye-opening journey through the history, culture, and places of the culinary world. Order Now