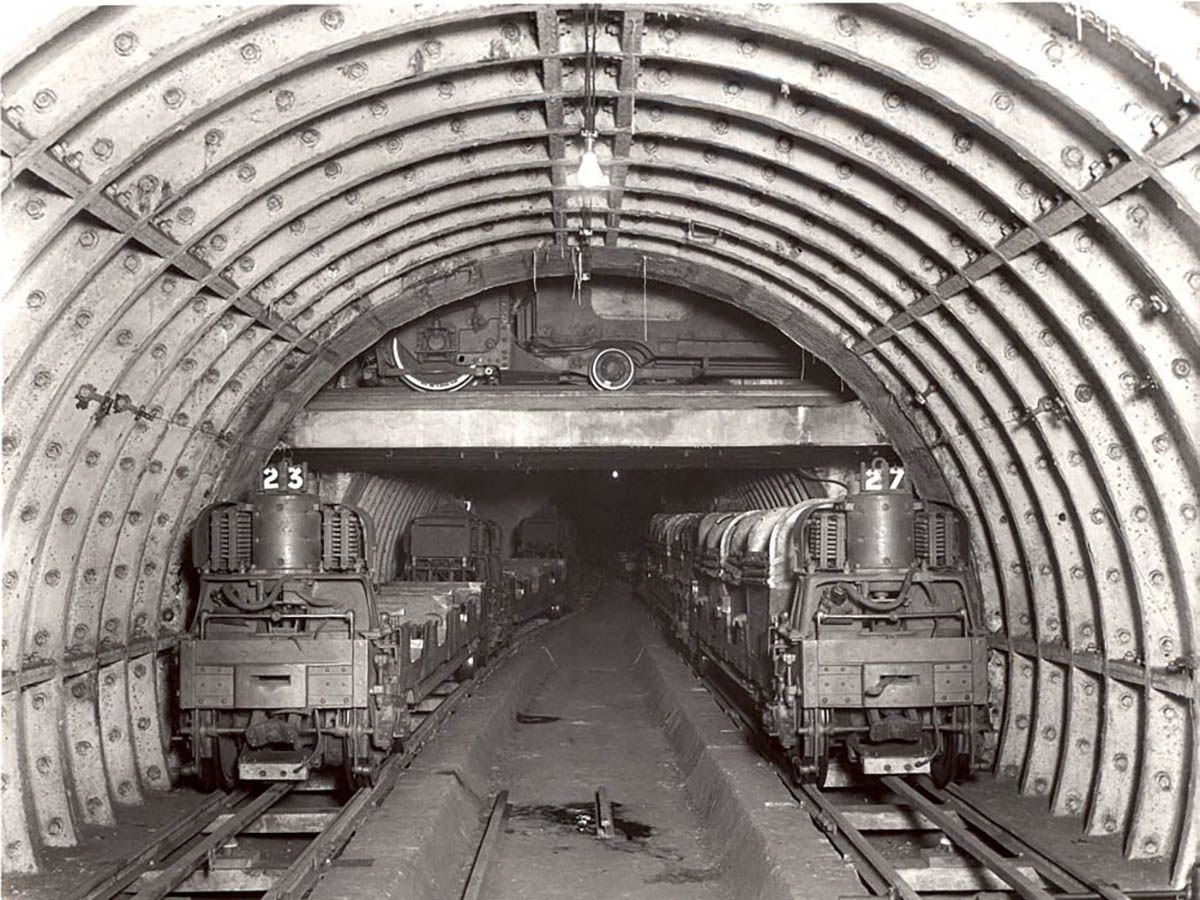 There’s a whole world hidden beneath modern London: Churchill’s war bunker, a Victorian street, and the 2,000-year old remains of a Roman amphitheater. There’s also 240 miles of underground track, a tunnel beneath the Thames for pedestrians, and a vast sewage system network that dates from the late 19th century. And then there’s the Mail Rail, 6.5 miles of disused railway that, for more than 75 years, shuttled letters and parcels between sorting stations across the capital—some 70 feet underground.

But before the Mail Rail, there was that popular Victorian device, a pneumatic tube. The London Pneumatic Dispatch Company opened a postal railway under Euston Station in 1863 that could carry 35 bags of mail one-third of a mile in a minute. According to a comparison in the East Kent Times in 1864, the tunnel “represents the pea-shooter, and the train the pea, which is driven along in one direction by a strong blast of air, and drawn back again in the opposite direction by the exhaustion of the air in front of it.” It was deemed to do the job “exceeding well,” according to an 1865 edition of the Illustrated Times, but it proved expensive. The line closed in 1874, after a little over ten years of operation.

As the city developed, so too did its traffic problems. The congested roads created significant postal delays, so in 1909 discussions began for an underground railway. Construction started in 1914, but the timing was poor: With the outbreak of World War I, the operating equipment could not be ordered. The tunnels were finished, but with no method of transportation, the project was halted until 1923. The tunnels did serve a secondary use during the war: They stored works of art from the National Portrait Gallery and the Tate Museum. The Mail Rail eventually opened on December 5, 1927, just in time for the year’s Christmas rush.

The system ran from Paddington in West London to Liverpool Street Station and the Eastern District Office. A diagram from 1926 shows how it worked. Mailbags from trucks were transported down to platforms via chutes and elevators. Once loaded onto the trains, the mailbags went along a single tunnel, nine feet in diameter, which split upon arriving at stations. The trains were electric and driverless, and resembled carnival rides. (Appropriately, staff held Christmas parties in the stations, and Santa arrived by train.) At its peak, the Mail Rail ran for 22 hours and carried four million letters each day.

Over the years, postal use declined and running costs escalated. After over 75 years of use, the Mail Rail closed in May 2003. The abandoned tunnels were rediscovered by urban explorers, but there’s now a legitimate way to view a part of London’s hidden underground world: the new Postal Museum. Opening on July 28, 2017, the Museum’s attractions include a ride on one of the mail trains under the Mount Pleasant sorting office. If you can’t get there—or can’t wait until the ride opens on September 4—Atlas Obscura has a selection photographs, of both the abandoned tunnels and the heyday of the Mail Rail.

The Farm Where Cows Munch on Potato Chips

It adds subtle notes to the beef, according to chefs.
londonpostalmailtunnelsvisualphotographytrainssubterranean sitesabandonedmuseums

Join us for a daily celebration of the world’s most wondrous, unexpected, even strange places.
wwi

A new exhibit reveals the wondrous sights service members found away from the trenches.
museums

A new collection acquired by the Smithsonian is a window into Black history.
abandoned