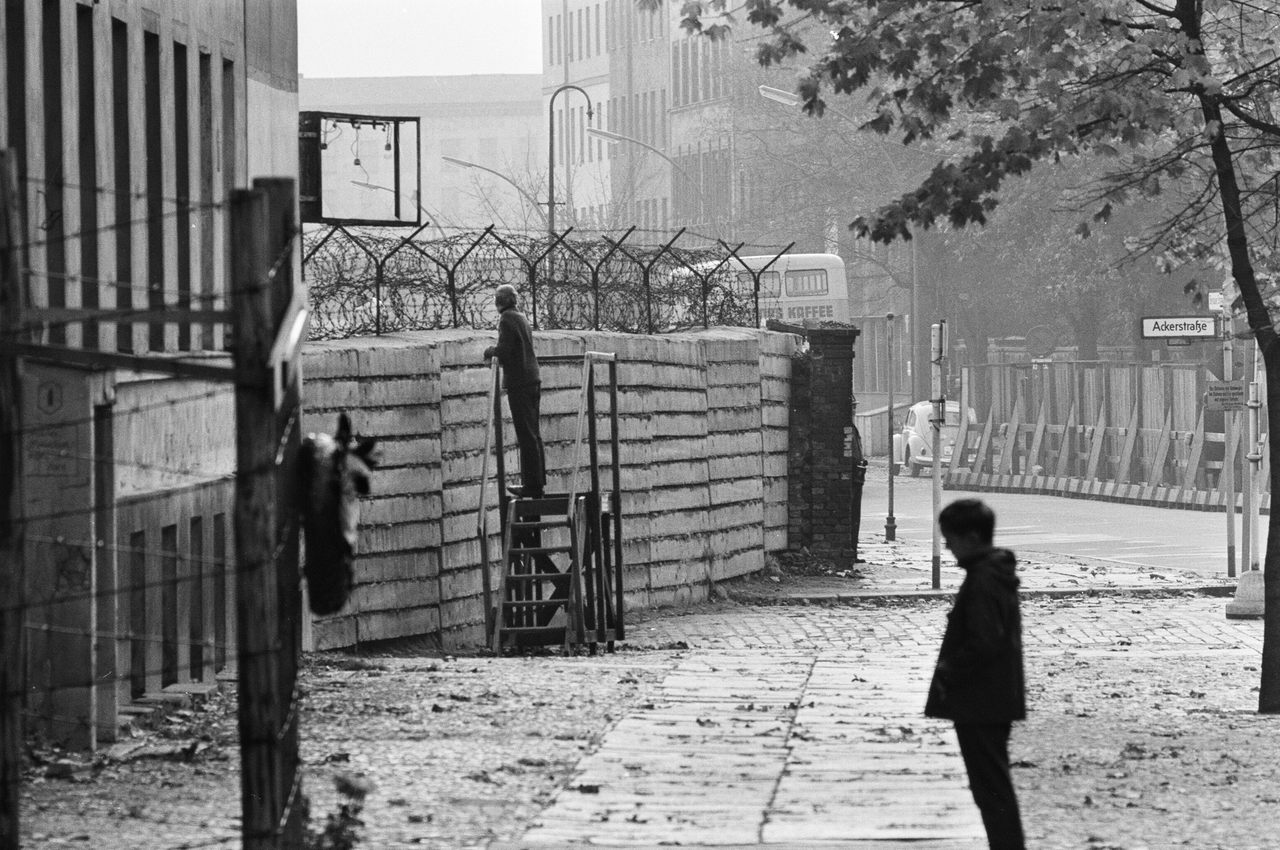 Many escape tunnels were dug under the Berlin Wall in the Prenzlauer Berg neighborhood, including the famous Tunnel 57. Abthorp/Mirrorpix/Getty Images
In This Story
Destination Guide

“I was a bean in a saucepan,” says Andreas Springer, smiling. Now 78, he has only recently begun speaking openly about a night more than half a century ago. In October 1964, Springer, then just 21, was one of the last people to escape East Germany via Tunnel 57, the deepest and longest subterranean passage beneath the Berlin Wall. His story is a real-world Cold War thriller, complete with code words: In the secret network of people helping escapees flee to West Berlin via the tunnel, men were “beans,” and women “peas.” The innocuous code belies the high stakes of Springer’s escape and subsequent events at Tunnel 57 that left one man dead and others scrambling for their lives.

Today, 55 Strelitzer Strasse is just another apartment building in Berlin’s trendy Prenzlauer Berg neighborhood. There is little trace of what happened here in 1964, when an outhouse in its backyard hid the entrance to Tunnel 57. Started in April 1964 by 35 West Berlin students, Tunnel 57 was more than 30 feet below ground and stretched for nearly 500 feet. It brought dozens of East Berliners to the West, including young Andreas Springer.

Springer, born in 1943, grew up in the Berlin suburb of Dreilinden. In the early 1960s, he had hopes of becoming a graphic designer and applied to three art schools but was summarily rejected. “I was a Catholic, I wasn’t with the Young Pioneers, not part of The Free German Youth, and I had three brothers in the West. It was too much!” says Springer, referring to the discrimination inherent in the East German system.

Two of Springer’s older brothers, Klaus and Ulrich, had visited Paris in early August 1961 and found themselves unable to return home, cut off from their family by the newly-built Berlin Wall. They settled in West Berlin, aware of their younger brother’s increasingly difficult situation. Dreilinden was close enough to the wall that it was considered a restricted area, leaving Andreas Springer isolated from his friends. He also faced growing pressure to join the army, and had regular run-ins with the state apparatus—“I got arrested by the border guards while picking mushrooms,” he recalls.

“My mother called me and said, ‘I’m worried about Andreas,’” says Klaus Springer. “‘He wanders through the Dreilinden forest every evening looking for a way to escape.’ My mother knew very well that if Andreas tried anything he would have been shot in an instant. That was a cry for help from her that I will never forget.”

His brothers thought to smuggle him out by car but scrapped the idea after another individual was caught during a similar escape attempt. The elder Springers came up with a new plan: In mid-1963, they set up an initial meeting between their brother and a West Berliner named Gerd who was able to move freely across the border and operated secretly as a guide for would-be escapees. Nothing happened for the next year. Then, on Sunday, October 4, 1964, Springer met Gerd again. He learned his escape would take place that night—no further details were provided.

“We didn’t mention to the people they had to escape through a tunnel, because we were afraid they wouldn’t go,” says Klaus von Keussler, one of the people who helped dig Tunnel 57. Von Keussler, then a law student, was also a runner for Tunnel 57. By 1964, he adds, East Germans had discovered several tunnels before they were operational, and people were increasingly hesitant to use them.

That evening Springer took Gerd to a restaurant called Ganymed with his last East German money. “I remember to this day that we had chicken fricassée on rice, and a bottle of Hungarian Tokaji Szamorodni wine. To me, this dinner felt like the last meal of a death row inmate,” Springer says.

About 40 minutes before midnight, the pair strolled down Strelitzer Strasse. Gerd left him with instructions to enter number 55, go to the backyard, and say the code word “Tokyo”—the 1964 Summer Olympics would kick off days later in the Japanese capital. Springer remembers his heart racing.

“I went down the row of houses on the left and thought, ‘Where the hell is number 55?’” Springer recalls, the memory still vivid. “It just wasn’t there! So I strolled to the next house. Lights on, then to the right, and then up the stairs. But no stairs led down to the courtyard. I went up to the third floor, waited a bit, and then went out. Just 30 feet away there was a border patrol in a small booth.”

Gerd had advised Springer that, in the event of a problem, he should wait 20 minutes and try again. So he hurried back to the park where he’d left a fashionable nylon coat from West Germany, put it on, and ruffled his hair in an attempt at disguise. He returned to Strelitzer Strasse. This time he found number 55 and entered the courtyard. He recalls a tense exchange with a stranger waiting for him.

“You shouldn’t have come with a rustling coat,” scolded a voice in the dark.

“This is my second try, I had to dress up,” replied Andreas.

“Take off your shoes and put them in your pockets!” whispered the stranger.

Andreas did as instructed and padded through the courtyard to a derelict outhouse. A door opened and another man pointed a flashlight to a hole in the ground.

“Feet first, I climbed down the hole,” says Springer. “I crawled forward like a bug on its back. After about 160 feet I was able to turn around. It was better now, moving head first and on all fours.”

The tunnel was only two feet high and three feet wide. When Andreas arrived at the exit he found himself at the bottom of a 30-foot shaft. A rope with a wooden board, resembling a swing, was lowered to him. He was pulled up to an abandoned bakery in West Berlin, finally safe. Less than an hour later, everything changed.

Shortly after midnight, a West Berlin spotter—keeping an eye on number 55 with binoculars from the roof of a nearby building—alerted those manning Tunnel 57 to a problem. A car had stopped in front of number 55. The two people who got out and entered the building didn’t turn on the lights as members of the escape network knew to do. It was an East German border patrol. They had found out about the tunnel.

As the guards entered the backyard, “the helpers were immediately called back,” says Springer, who was still at the tunnel’s exit. Two of the men made it out of the tunnel, but a third could not be contacted. “He came back after a 475-foot sprint on all fours… gasping for air,” Springer recalls. Once the last helper was out, Springer and the others threw sandbags into the shaft to stop the East Germans from reaching them.

Meanwhile, in a West Berlin apartment, Springer’s brothers waited anxiously. At around 2 a.m., they heard the sound of footsteps coming up the stairs. “And when the door opened, I knew,” says Klaus Springer, remembering the sight of his little brother on his threshold. “The boy is still alive!”

It wasn’t until the following day that the Springers learned what happened immediately after Andreas left the bakery. Newspapers reported a shoot-out between the border guards and tunnel team. East German soldier Egon Schultz, just 21, was wounded and died on the way to the hospital.

“We were utterly shocked when we learned that Schultz was killed. He was only one or two years younger than we were,” says von Keussler. While East German propaganda blamed Shultz’s death on the tunnel helpers for years afterward, it was eventually proven that the young guard was killed by friendly fire.

As for Springer, he brushed aside mention of his risky escape even within the family. He achieved his dream of becoming a graphic designer and also a photographer—among his subjects was the 1989 fall of the Berlin Wall.

“My brother Klaus once told me, ‘You never thanked us for what we did for you,’” says Springer. “I said ‘Klaus, you’re right. But saying thank you is easy. It’s too simple for what you did for me.’ The truth is, to this day I still get shaky thinking about that fateful night.”

When Ruggles Mine went up for auction, mineral collectors feared it would never reopen to the public. After a last-minute reprieve, its future is still uncertain.
exploration

Was There Treasure Buried Under Lyon?

Since their discovery more than 60 years ago, the "Fishbones" tunnels beneath the French city have been an enigma.
Video