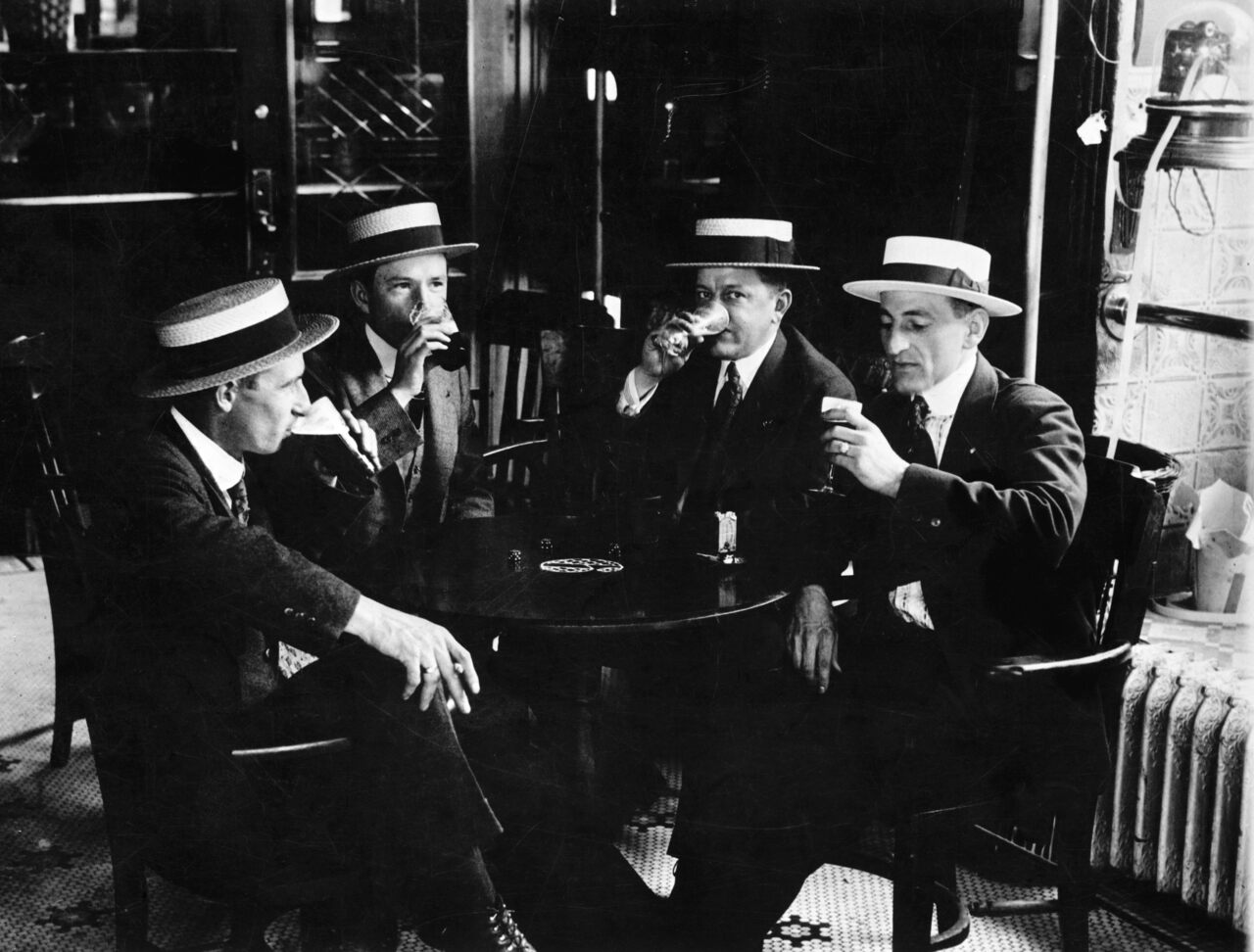 Four men in boater hats enjoy a last drink together before Prohibition begins in 1919. Bettmann / Getty Images
In This Story
Destination Guide

In Silicon Valley, it’s only a six-mile drive from the Googleplex to Facebook HQ. In Manhattan, Madison Avenue has long been lined with renowned advertising firms. And in San Francisco, the city’s best burrito joints are clustered in the Mission District.

A few years ago, Mike Andrews became interested in this human geography—the way that innovation and invention emerge from specific places. This phenomenon of the best coders, ad men, and burrito chefs clustering together interests everyone from economists to sociologists.

“Researchers tend to think that informal social interactions—people bumping into one another and swapping ideas—is vital for innovation,” Andrews says. A postdoctoral fellow at the National Bureau of Economic Research, he means that quite literally. An oft-cited research paper on Madison Avenue ad agencies found clear benefits to headquartering close together, but only within a half-mile radius.

What bothered Andrews, though, is that no one knew exactly how and where these vital interactions took place.

“If you press economists on this when they’re giving talks, and ask why it matters that everyone’s in the same city or within a few blocks, they’ll say something like, ‘People get together and talk at the bar,’” says Andrews. “I’ve actually heard this multiple times. [But] I don’t think direct evidence of that has ever existed before.”

So, during his PhD days, Andrews came up with the idea of finding that evidence. He’d do it by looking at that time the United States shuttered all its bars overnight: Prohibition.

Prohibition in the United States began long before Congress imposed a nationwide ban on alcoholic beverages in 1920. In the prior decades, towns, counties, and states had voted on local prohibition laws, often in referendums. When temperance activists succeeded in passing statewide bans on alcohol, they did so with the support of teetotaling areas (where no legal drinks had been served in years) over the objections of wet towns and counties (whose bars and taverns overflowed on Fridays).

Across the United States, these new laws promptly shuttered the imbibing regions’ bars and taverns. A century or so later, Andrews realized this was the holy grail of social-science research: a natural experiment. He downloaded patent data, compared the number granted to inventors in the wet and dry counties before and after statewide prohibition began, and came up with a measurement of the importance of slightly drunken discussion to invention.

The result? A 15 percent decrease in the number of patents. The areas whose saloons shuttered had become less inventive.

This is a meaningful change, comparable to the effect the Great Depression had on invention across the United States. In other work, Andrews has calculated that the establishment of a new university results (eventually) in a roughly 45 percent increase in local patents. This suggests that the bars’ closure had an effect one-third as strong as a county gaining a university—albeit in the opposite direction. Which is pretty remarkable! After all, universities are centers of knowledge, and bars are businesses that exchange beer for money.

A careful researcher, Andrews road-tested his theory and results. He looked at patents received by women, who were generally unwelcome in pubs and taverns at the time, after local laws against alcohol went into effect. As expected, the decline was much smaller for female inventors. Similarly, he looked at serial inventors, who often worked for companies and might be more inspired by in-office conversation and collaboration. They too were less affected by prohibition.

Andrews has written a working paper about his research, titled “Bar Talk: Informal Social Interactions, Alcohol Prohibition, and Invention.” In it, he’s careful to note that alcohol itself does not explain the dwindling innovation of dry America. In fact, the trend reversed itself within a few years, well before nationwide Prohibition was repealed.

“My guess is that a lot of the informal communication shifted to places like the church picnic, the public park, the barber shop, or the bowling alley,” says Andrews. Bars were just one place where conversation could inspire new ideas. (Speakeasies were probably inferior replacements—the need to speak quietly and avoid police detection prevented the free exchange of ideas.) Once people shifted their social scenes to new venues, invention continued apace.

The point of looking at Prohibition, Andrews writes, is that it was “one of the largest involuntary disruptions of social networks in U.S. history.”

Prohibition disrupted much more than nightlife. In a tradition dating back to the country’s origins, Americans had long favored beer and bars over coffee and cafés. “The American Revolution was basically plotted in local taverns in Boston and Philadelphia,” says Andrews. Repudiating the tea-loving Brits they’d fought against, Americans viewed bars as venues of culture. Taverns hosted lectures and served as community centers, information hubs, and employment bureaus. Some sported names such as “Mechanics’ Exchange” and “Stonecutters’ Exchange,” reflecting their clientele’s association with specific industries. “So much of the interaction we [now] think of happening in coffee shops happened in the saloon,” says Andrews.

That changed during World War I. Amidst the growth of the Temperance Movement and local bans on booze, the United States went to war against Germany, exporter of breweries and beer halls. “Almost overnight, the cultural mood toward the saloon relative to the coffee shop basically flips,” says Andrews. Nationalism set the United States on a course toward coffee shops full of aspiring novelists and hand-shaking executives. Andrews’s next project, in fact, is investigating whether the rise of Starbucks had an impact on patents. Findings from this data-crunching research project, he says, are “on tap.”

That doesn’t mean bars have stopped being hubs for sharing ideas and inspiring invention. In his paper, Andrews cites the example of the Homebrew Computer Club—the computer-hobbyist group whose members included Apple co-founders Steve Jobs and Steve Wozniak—meeting regularly at a now-shuttered Bay Area bar and grill, as well as the trope of inventions and new business ideas being sketched on cocktail napkins. (Among many examples, the team that dreamed up Discovery Channel’s Shark Week recalls doing so over drinks.)

And while Andrews’s research was agnostic on the merits of alcohol for invention, he did notice, when he drilled down into the data, that talking in bars, rather than at other venues, influenced the patents produced. During the booze bans—even a few years in, when the number of patents had rebounded—inventors who’d previously worked together no longer partnered up.

For his part, Andrews came up with the idea for his research while chatting with other graduate students at a bar, Joe’s Place, in Iowa City. “I find the bar to be a great place to air out lots of ‘bad ideas’ in a setting that is safer than the seminar room,” he says, adding that it’s often in bars where he talks to members of different departments. Reflecting on that, he seems cheerful: It’s one more data point supporting his research.

18 Great Big Things That Are Both Big and Great

The ‘Six O’Clock Swill’ Was an Hour of Drunken Anarchy

Drinking eight pints of beer a day was once routine.
essential guide

10 Bars at the End of the World

Raise a glass to some of the most remote and unlikely watering holes in the far reaches of the world.
beer

21 oddities that became iconic neighborhood fixtures for those in the know.
Video • PinDrop

This salad named after a scandal has been traced back to Kraft and Helen Keller.
Gastro Obscura

A small industry of themed glassware was launched solely for the enjoyment of this hot winter punch.
Related

Grabbing a drink once meant moonshine in a neighbor's living room.
Read more
Thanks for sharing!