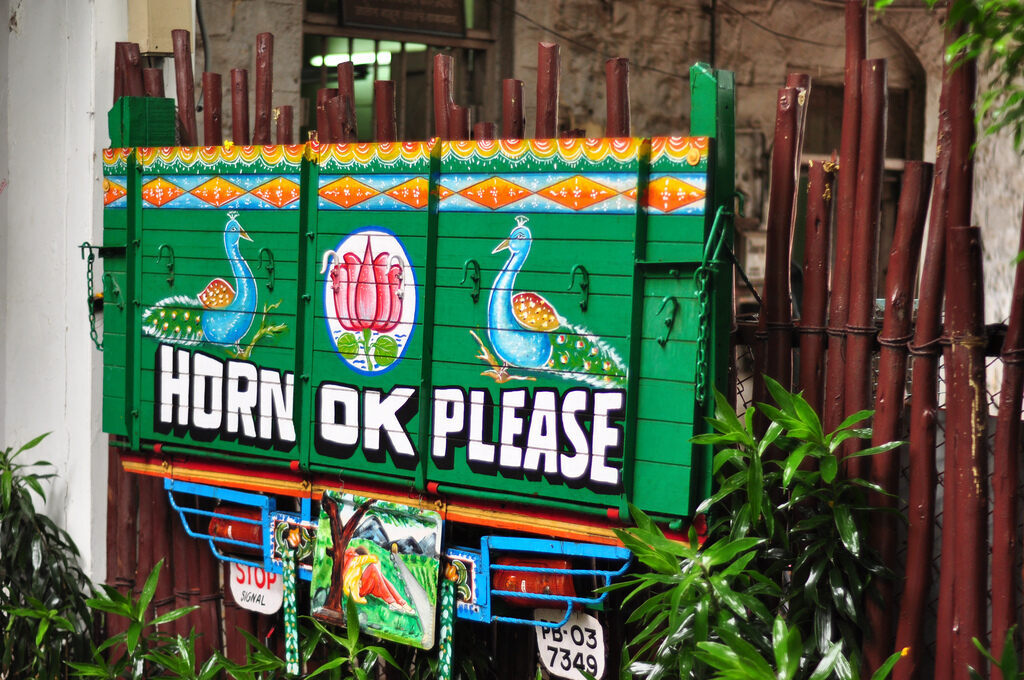 The back of a truck mounted and used as a gate for a restaurant. Sankarshan Mukhopadhyay/CC BY-SA 2.0
In This Story
Destination Guide

Driving in India is a loud experience, to say the least.

One of the characteristic traits of Indian roads is the sound of honking car horns, which provide a constant cacophony of noise. In 2015, the transportation department of Maharashtra, the state containing the city of Mumbai, attempted to diminish the noise pollution caused by the honking by outlawing a phrase found on the back of almost all Indian trucks: “Horn OK Please.”

It is unclear whether the ubiquitous sign actually contributes to drivers honking their horns more, though the government of Maharashtra certainly seems to think there is a connection. The phrase itself, however, is intriguing for two reasons: the first being that it doesn’t seem to make grammatical sense, and the second for the question it raises—why would Indian trucks be encouraging drivers to honk their horns?

One possible reason for “Horn OK Please” is pretty instinctive. As Kenneth Rapoza notes in this Forbes article about horn honking in India, Indian drivers rarely use their side mirrors, and instead use horns to indicate when they are about to overtake a car. Trucks, in particular, are often not even equipped with side mirrors in the first place. As a result, the backs of trucks may be painted to urge drivers to use their horn as a signal to the truck driver when they are overtaking.

While the reason for “Horn OK Please” may simply be a matter of the peculiarities of Indian driving etiquette, it doesn’t quite explain the “OK” in the middle of “Horn Please,” which would make much more sense by itself. That the “OK” is incorrect grammatically seems contradictory to the fact that it is almost always present. One theory suggests that the “OK” is meant to be separate from “Horn Please,” and is intended to only appear to the eye when the driver is a safe distance away from the truck. If the driver is too close, the theory goes, only “Horn Please” is visible.

The validity of this idea is questionable, given that there is very little consistency in how the words are painted, although the words themselves are often the same. It seems unlikely that on all Indian trucks with the sign, the “OK” is only visible when the driver is a safe distance away.

Yet another theory behind “Horn OK Please” is derived from a tradition thought to date to World War II, when there were worldwide diesel shortages. During this time, trucks in India would be filled with kerosene instead. Though it may be apocryphal, some people say they recall that the backs of the trucks were painted, “Horn Please, On Kerosene,” to warn drivers to keep their distance. This reason is among the more plausible, given that many Indian truck drivers continue to mix diesel with kerosene to save money on gas.*

A more fanciful interpretation of the “OK” comes from the fact that the multinational Tata company used to have a near-monopoly on first Indian trucks to be manufactured. Tata Motors, the automobile arm of the huge conglomerate, supposedly painted “OK” on the back of its trucks as a subtle—and somewhat insidious—way of advertising the new “OK” detergent and bath soap from its Tata Oil Mills subsidiary. Whatever the true reason may be for the phrase, it’s clear that “Horn OK Please” has embedded itself into the Indian cultural consciousness. Beyond the handful of restaurants and food trucks around the world that use the words in their names, “Horn OK Please” has even found its way into Indian pop culture. In 2009, a Bollywood comedy entitled Horn OK Pleasss came out in theaters, and in late 2013, Indian rapper Yo Yo Honey Singh released a tune named after the back-of-a-truck phrase. The government of Maharashtra might believe that the noise caused by “Horn OK Please” is polluting their streets, but evidently the quirky words have given people something to sing about, too.

*Correction: This story has been updated to remove an inaccurate description of the potential dangers of kerosene.

For Sale: A Giant Piece of Cereal, Signed By Wrestlers

The Centuries-Old Shrine Where Indians Pray for U.S. Visas

It has a decent track record.
food

The 9,000-Mile Sea Journey of an Irradiated Indian Mango

Can the delicate mango ever become a seafaring fruit?
food

Biryani is Better Than Americans Know

How to Travel Safely With a Crocodile

A professional reptile transporter breaks it down.
Want to see fewer ads? Become a Member.
From Around the Web
Atlas Obscura Trips
India: Desert Festivals of Rajasthan
View This Trip
Thanks for sharing!