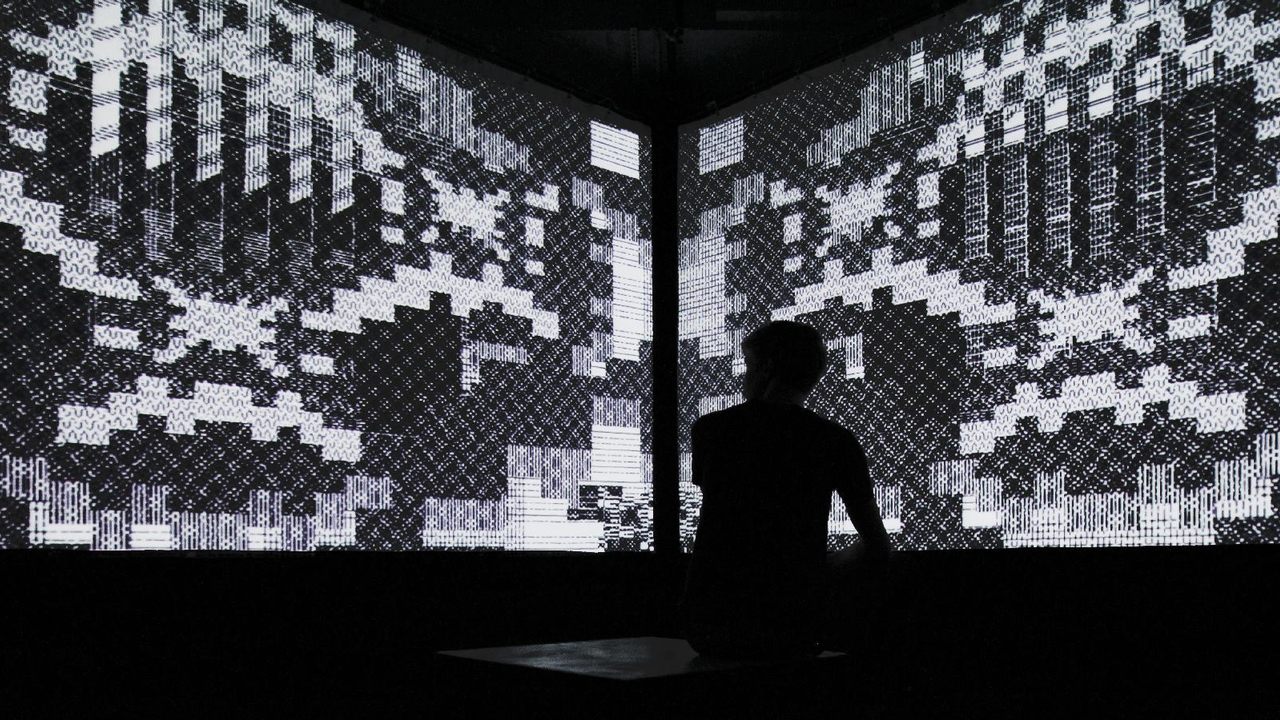 He sat in the glow of the pixelated green and black screen of his Apple IIe, exploring the dark dangerous tunnels of an ancient tomb in the 1982 adventure computer game Aztec. Instead of seeking the jade idol and escaping from the tomb, Burr found himself engrossed in dwelling deeper and deeper into the virtual abyss.

“I would always end up blasting holes and dropping down really deep into the dungeon with no way back out,” Burr says. “It seemed like it was just part of the system—that when you actually get into this space you build this nightmare where you get trapped. You get buried alive.”

Instead of trying to win the game, he found himself just getting more lost in the labyrinth. In effect, Burr created an artificial infinite dungeon—a lair where your character falls into an endless cycle of death. There is no end, and sometimes there is no goal other than to stay alive. Players continue to enter the new randomly generated space, and die ceaselessly. Now, Burr uses the concept of infinite dungeons to create pieces of artwork such as the 4-channeled immersive exhibition called Pattern Language, which he debuted this September at 3-Legged Dog Art & Technology Center in New York.

“These are games that are built upon the algorithmic beauty of nature and simulate this idea of chaos or entering this world that is in itself alive,” says Burr.

So what is an infinite dungeon? Being stuck in an infinite dungeon is like being locked in a room. You are given a toolbox, where each day the contents of the toolbox are different and must use what you have to escape the room. But, if you mess up you die.

At the core of dungeon crawling role-playing games, you navigate a character through the digital space (a cave, a castle, a tomb or even outer space) with a set labyrinth environment and explore. The goal primary is to find loot or face a boss at the end of the dungeon, and avoid getting killed on the journey. (It’s complicated because the infinite dungeon experience can be the whole game, or it can be just an aspect of it. So all infinite dungeons take place in dungeon-crawling games, but dungeon-crawling games can contain more than infinite dungeons.)

The most famous game of this style was the 1980 dungeon crawling video game Rogue: Exploring the Dungeons of Doom.

Rogue is like most dungeon games: venture through the labyrinth, find the Amulet of Yendor, and try not to be killed by monsters. However, if your character does die, the character dies for good—forcing the player to become an entirely new character and creating a sense of permanence to death, or permadeath. When the character enters the dungeon again, the layout of the space and objects that populate it are completely different. This is called procedural generation, a feature where the game algorithmically makes each playthrough a unique experience.

By adding tension with permadeath and procedurally generated layouts, Rogue brought forth a new representation of death and life, changing the state of infinite dungeon games.

Players called games of the same ilk “roguelikes,” but now use a variety of terms, explains Porpentine Charity Heartscape, a writer and game designer who is currently collaborating with Burr on a multi-part adventure game called Aria End—the larger project Pattern Language falls under. “The current vogue is to inject randomized survival elements into a lot of different games, so the genre has cross-pollinated,” Heartscape says.

Figuring out which games fall under the roguelike category is messy. Elements of infinite dungeons can be found incorporated into a level or they can be the entire premise of video game. Some passionate fans of the “crawl community” have even created a video game genre for the gameplay, called Procedural Death Labyrinth.

The game style has evolved into elaborate, and seemingly never-ending landscapes and universes. For example, the survival game No Man’s Sky released this August has gained a lot of attention for the over 18 quintillion unique planets that a player can explore. The dungeon mechanism, writ large.

Another difference with more recent games is that players can sometimes carry over advancement and earnings from earlier runs, writes video game journalist Dan Griliopoulos. “The addiction element of these games doesn’t just come from the mechanics of surviving further in the main game, but from the compulsion loop of wanting to unlock more elements to improve your next run,” he writes.

Some infinite dungeon games can be trivial and frustrating as players try their hardest to stay alive. But, people continue to play and enjoy seeing how far they can explore, says Heartscape. There’s a soothing simplicity to using the tools in a space to try to escape or hunt for treasure.

“I feel focused when I play games like that, and find it calming to experience a controlled microcosm of this cruel, voracious world, where death can be experienced therapeutically, not terminally,” says Heartscape. “I think recreationally dying is one of the best things about living in this century.”

Burr recently returned to the infinite dungeon in a game called Stone Soup. He found himself sucked into an endless labyrinth yet again, lured by the constantly unpredictable and shifting layout. It was his continuous demise in Stone Soup that inspired him to create his series of immersive art projects. He aims to encapsulate the feeling of getting lost in a living, mutating digital world.

“I remember when I was playing Stone Soup a lot,” says Burr, “there was something nice about when I would get deep into a game and accrue a lot of experience with this character. I would form this connection—this attachment to being in that world—that I wouldn’t get when you can just reset and start the game over.”

The bond players sometimes form with characters and avatars is intensified by the risk of death, especially games with permadeath, explains Teresa Lynch, a social scientist and doctoral candidate at Indiana University who researches the emotional phenomenon in video games. There are a variety of representations of life and death in games. In games like World of Warcraft, players spend a lot of time enhancing their characters, developing a kind of social relationship, Lynch says. Here, there is more incentive to keep the character alive. Conversely, players wouldn’t form such strong attachments with avatars in Call of Duty where death is expected to happen often.

“Just the fact that you can live and die and live again is something that is interesting,” says Lynch.

While Lynch wonders whether this may desensitize players, there have been no evidence or studies that support it. If you’ve reached an unfortunate demise in a game, pressing the reset button is usually an option if you don’t want to rebuild everything you’ve lost.

“The fact that we still want to avoid death, that we still see it as something that’s punished in the virtual world isn’t much of a shock,” says Lynch. “I think most video game worlds are communicating to the player that death is not something we should be seeking.”

But in infinite dungeons, respawning into a familiar world, but one that has been transformed creates a different idea of what death means.

“I think there’s something important about making a video game that creates this labyrinth that is generative and alive,” says Burr. “Infinite dungeons tap into a lot of really deep fears about getting lost and what it means to progress through life.”

The Surreal British Clone Towns Taking Over the Turkish Coast

Watch These Microscopic Organisms Feast on a Dead Worm

A delightful meal for microbes.
31 days of halloween

Bringing folklore to life with capes and masks.
31 days of halloween

The Colombian Folk Singer Who Showed Up to His Own Funeral

The burgeoning hipster city has hundreds of ursine residents.
Want to see fewer ads? Become a Member.
From Around the Web
THE GASTRO OBSCURA BOOK
Taste the World!
An eye-opening journey through the history, culture, and places of the culinary world. Order Now