French Polynesia's Teti'aroa Has Been an A-Lister Retreat for Centuries - Atlas Obscura
Want to see fewer ads? Become a Member. 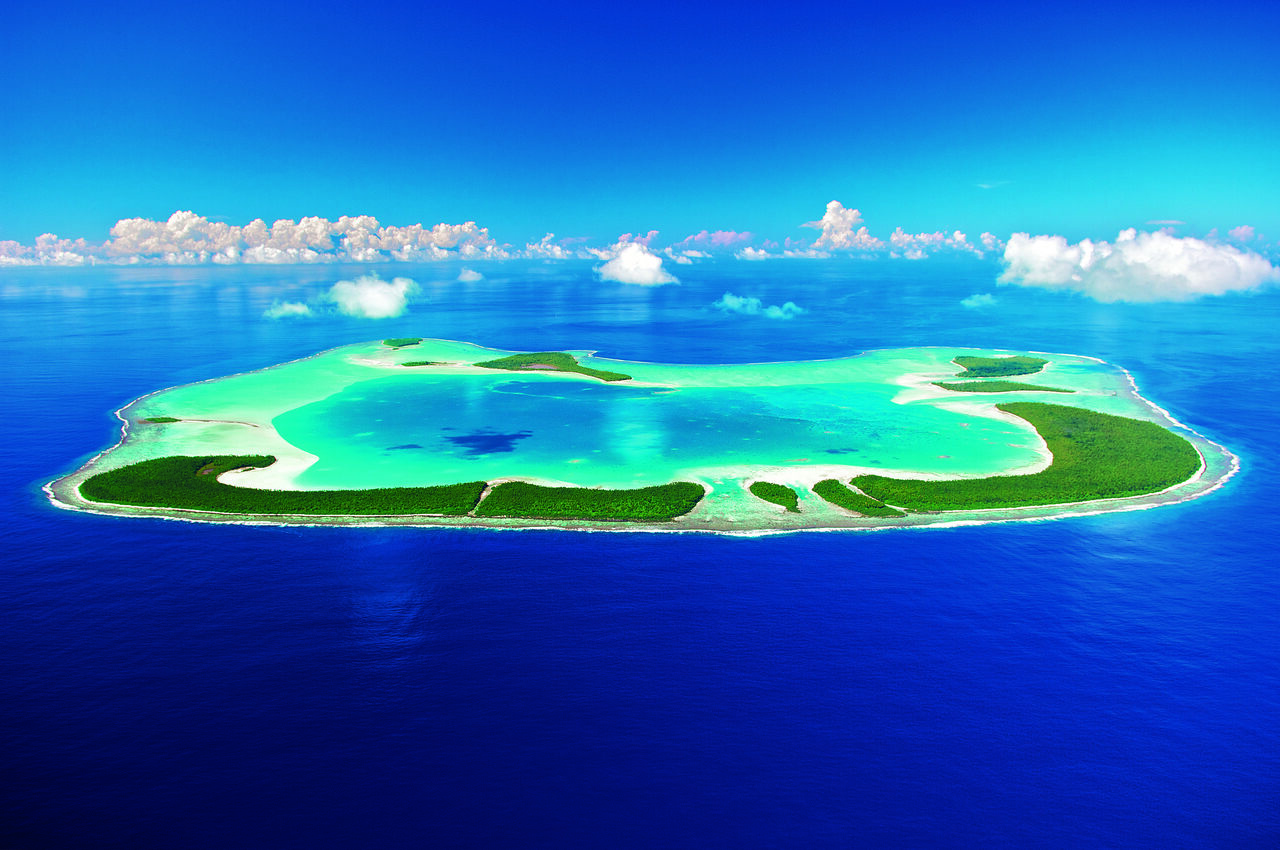 The South Pacific atoll of Teti'aroa is about 30 miles north of Tahiti. Courtesy Tetiaroa Society
In This Story
Place

This beautiful eden was once the vacation home of Tahitian royals before Marlon Brando bought it.
Destination Guide

When you live on a tropical island paradise already, where do you go to escape it all? In the 18th century, the ultimate vacation destination for the chiefs of Tahiti was a teeny atoll a half-day’s sail away. Known as Teti’aroa, the ring of 12 lush islets framed an azure lagoon teeming with turtles and dolphins. Back on the mountainous volcanic island of Tahiti, the chiefs ruled over a few thousand native Mā`ohi people. But on Teti’aroa, rulers and their entourage could kick back in ways not possible at home.

Tahitian chiefs weren’t the last A-listers to holiday, out of the public eye, on Teti’aora. While filming 1962’s Mutiny on the Bounty in the area, actor Marlon Brando became so enchanted that he eventually bought the atoll and worked to safeguard its natural beauty. Consequently, the only developments on Teti’aroa today are the Tetiaroa Society, a conservation nonprofit, and The Brando, a luxury eco-resort. The secluded retreat has drawn celebrities such as Leonardo DiCaprio and former president Barack Obama, who penned his memoir there in 2017.

For native Tahitians, “Teti’aroa is the jewel that we want to really protect,” says Hinano Murphy, cultural director of the Tetiaroa Society. The organization aims to conserve both the natural and cultural heritage of the alluring atoll, about 30 miles north of Tahiti. Both islands belong to present-day French Polynesia, located in the heart of the South Pacific, about 2,700 miles south of Hawaii and 3,700 miles east of Australia.

To document Teti’aroa’s history, the nonprofit is working with archaeologists and local communities to weave together scientific data and traditional knowledge, including oral histories, songs, and indigenous place-names. Murphy, for example, has been conducting interviews with elders who live along Tahiti’s northern shore, where the 18th century chiefs who owned Teti’aroa ruled. She says a lot of knowledge has been lost, but it’s critical to collect the stories and other details that remain. “We want our children, for the future, to know what we knew,” says Murphy.

The emerging story confirms Teti’aroa was the vacation spot for the royal family of Te Porionu’u. But the islets also served other functions: Leaders from other islands and their delegations convened there for rituals and negotiations. The youngest members of chiefly families also partook in ritual fattening, or ha’apori, on the atoll: They holed up in dwellings, out of the sun, and fed on a high-calorie fermented paste of breadfruit and coconut water. After weeks they would emerge, looking plum royal: pale and fat.

Ongoing research also shows that Teti’aroa has been a prized destination for native Polynesians much longer than thought—probably ever since the archipelago’s largest islands, Tahiti and Moorea, were first settled, some 900 years ago. Archaeologists Guillaume Molle of Australian National University and Aymeric Hermann of Germany’s Max Planck Institute and the French National Centre for Scientific Research (CNRS) began working on Teti’aroa about a decade ago, when The Brando resort was being built. During construction, the crew occasionally came across ruins and alerted archaeologists from the University of French Polynesia, on nearby Tahiti. Molle and Hermann, then doctoral students at the university, visited the atoll at different times to study the finds, including a burial and an open-air temple known as a marae.

The excursions led to a long-term collaboration with the Tetiaroa Society that began with an intensive survey. The team set out to map every archaeological feature on the atoll with the help of mid-20th century aerial photographs, high-resolution satellite shots, and LiDAR images, created by flying a laser over the ground to measure surface topography. They also searched on foot.

Over the course of three years, they shuttled from islet to islet by boat, and combed the terrain for signs of stone walls or tools such as ax-like adzes. “We walked dozens and dozens of kilometers across the islands. Even if it doesn’t look big, it’s actually quite big when you walk around every day for four weeks from morning till night,” Molle says. Their daily hunt included hacking through dense ferns, vines, and other vegetation, all while taking care not to harm forest crabs or nesting birds, such as red-footed booby.

The survey, published in the Journal of Pacific Archaeology in 2019, identified 115 archaeologically significant structures, from humble cooking stones to platforms for dancing and archery—the latter, a “sport done only by high rank chiefs or young warriors,” says Murphy. The results bolster traditional stories and ethnographies, which depict the atoll as a multi-purpose retreat and foraging spot for resources such as bird feathers, turtles, and coconut oil.

“The survey that Guillaume and Aymeric have been doing with Tetiaroa Society has really been interesting to see the types of sites that they’re finding,” says Jennifer Kahn, an archaeologist at William and Mary College. Khan researches French Polynesia but has not been involved in the ongoing project on Teti’aroa.

Kahn believes holidaying on Teti’aroa may have been a welcome break for Tahiti’s elite in the 18th century: Back home, the chiefs strictly adhered to tapu, which regulated how members of different social classes behaved. For instance, chiefs could not walk on the ground of a commoner’s house, and instead had to be carried atop attendants’ shoulders. Day in, day out, these restrictions probably felt exhausting. “If you were a chief, I don’t think you could walk out of your house and go fishing easily,” says Kahn, who adds that, if only people of the same status were present on Teti’aroa, such rigid codes of behavior would have been relaxed. “Funnily enough, Teti’aroa today serves the same purpose,” she adds, referencing Obama’s 2017 visit.

Highlights of the 2019 survey include identifying 20 marae, where Polynesians held ceremonies that honored deities and ancestor spirits. Across the archipelago, marae of the elite generally featured a rectangular, raised court, surrounded by upright stone slabs, though details varied from island to island. Marae on Teti’aroa exhibit architecture representative of different islands. “We suppose it means that these stories about Teti’aroa being a place where royal families gathered from other islands is probably true. They built marae to their own ancestors, in their own style,” says Frank Murphy, executive director of the Tetiaroa Society and Hinano’s spouse.

Archaeologist Hermann also measured the geochemical makeup of 83 artifacts or architectural features crafted from volcanic rock, which does not naturally occur on the coral reef atoll of Teti’aroa. His analysis, published in Archaeology in Oceania in 2019, revealed that about 90 percent of the material likely came from nearby Tahiti or Moorea. But several samples came from distant sources; one stone tool fragment, discovered on a Teti’aroa dancing platform, may have been sourced from andesite outcrops in Tonga or Fiji, 1,500 miles west, or New Zealand, nearly 2,500 miles southwest.

Though the team expected to find ruins from royal retreats, they were surprised by the many modest sites, spread all around the islets, which suggests a fair number of commoners inhabited Teti’aroa year-round, possibly before it was a royal retreat. The researchers hope radiocarbon dating will clarify when different groups used the island. “A pretty large community of people (were) living there, and very likely exploiting the different resources available on this atoll for a very long time,” says Molle. The community would have needed to get basics such as breadfruit and volcanic rock from larger neighboring islands, probably through trade. Teti’aroa “was definitely part of a bigger network of relationships,” Molle adds.

Found: An Old Norse 'Godhouse' Fit for Thor and Odin

The site reflects how the rise of Christianity to the south affected the worship of the Norse pantheon.
temples

The tradition of building and preserving the sacred spaces is both art and science for the <em>sthapati</em> lineage.
ancient technology

From Kushites to Christians, an old site in Sudan has new stories to tell.
Video