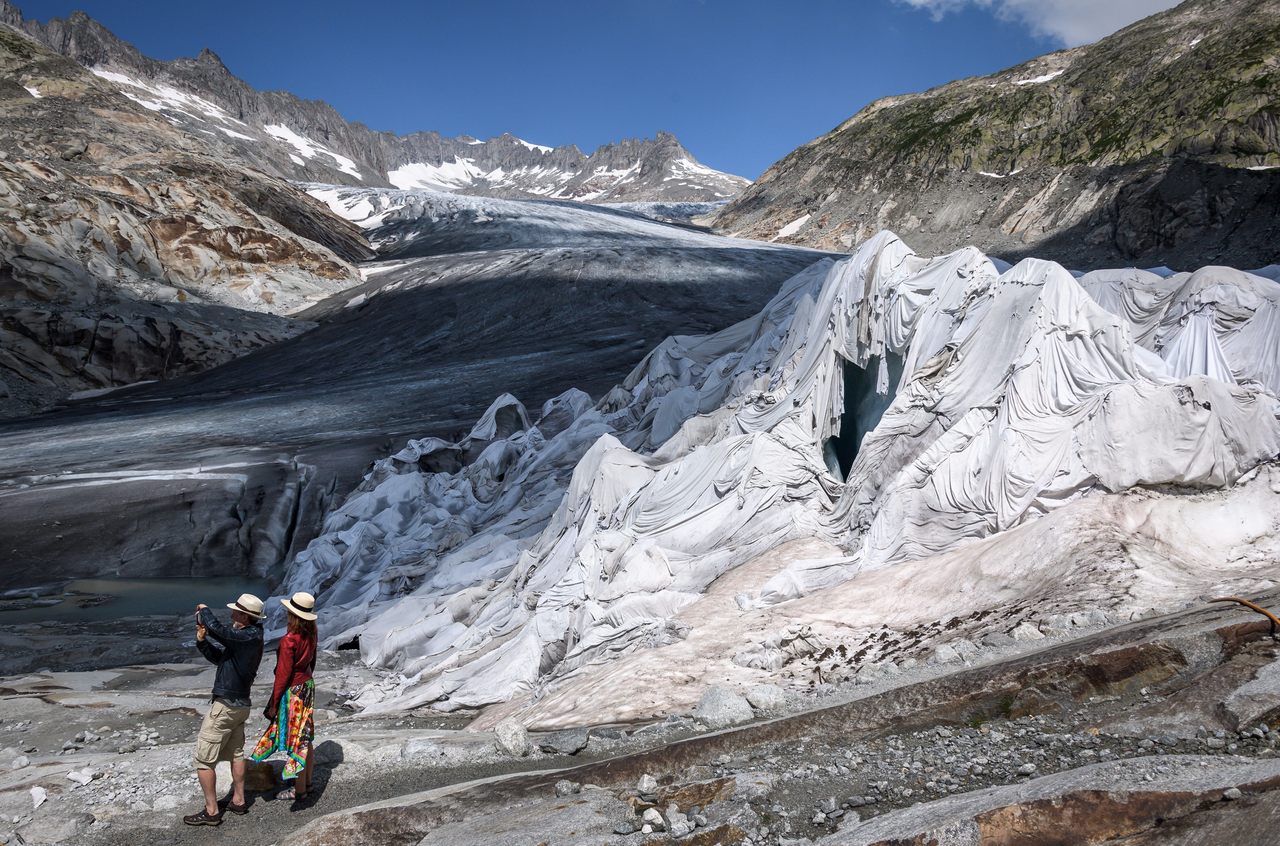 Visitors stand next to the Rhône glacier in August 2018. FABRICE COFFRINI/AFP/Getty Images
In This Story
Place

For years, if you wanted to get up close to a glacier—to feel the cold lift off the ice, to hear the water wending through rivulets and groaning beneath the surface—the Swiss Alps were the place to do it. But as the world warms, their frozen swaths are struggling.

Alpine ice has long captivated the people who have stood next to it. John Tyndall, an esteemed Irish physicist, rambling mountaineer, and avowed glacier lover, wound through the mountains in the 1850s, in an exhaustive quest to document their icy landscapes. Tyndall was propelled there by science, but found poetry in the peaks. He marveled at the milky blue color of the sediment-strewn water where the Rhône River fed into Lake Geneva, ferrying bits of silt from the glacier above it. He swooned over the “innumerable plates of mica” that “spangled the fine sand which the river brought down,” and observed that “these, mixing with the water, flash[ed] like minute mirrors.”

He certainly wasn’t alone in his awe. Because the Rhône glacier is reachable on a relatively undemanding trek, and readily accessible via the Furka Pass road, it has long drawn visitors who come to marvel at the cold mass, striped with damp earth. Since the late 1800s, they have even been able to step inside. Some 600 feet from the Hotel Belvédère, in the hamlet of Gletsch, a grotto has been freshly drilled into the ice each year.

The glacier’s exterior is a murky white, verging on gray, with patches of brown from the dirt and rocks it has picked up on its plodding journey—but inside, it’s a different story. The walls of the roughly 330-foot-tunnel are glassy and aquamarine: The visitors who bundle up in sweaters and boots and pay six or nine Swiss Francs to amble along wooden planks are, essentially, wandering through a blue cathedral of living ice.

Trouble is, there’s less and less of the glacier to go around. The Rhône glacier—like so many others scattered through the Alps, Himalayas, Iceland, United States, and elsewhere—is shrinking. The glacier’s thickness has dwindled by 33 feet annually over the past 10 years, according to the Sierra Club, and the AFP reported that it is expected to lose half its volume within the next decade. The Hotel Belvédère—once so close to the glacier that at night, when car engines fell quiet, guests could drift off to the sound of rushing water—has closed its doors. Inside the grotto, the walls sweat; one visitor told the AFP that water falls from the ceiling like rain.

Because the Rhône glacier nourishes tourism—and because locals feel affection for it—the community has stepped in to try and slow its disappearance. For roughly a decade, the glacier’s human neighbors have swaddled it in fleece blankets, as though tucking it in to sleep. From June to October, visitors heading for the ice grotto pick their way around the blankets toward the inky opening, the only part that’s open to the sun. The white fleece makes the landscape look like a construction site, and, in way, it is: the demolition of a natural wonder, in slow motion.

For those fighting to save glaciers and ice sheets, blankets are just the beginning. Over the past decade, as global temperatures have risen, researchers around the world have floated out-of-the-box ideas for delaying the disappearance of glaciers and ice sheets. The proposals include sprawling underwater walls, to prop up ice sheets; reflective coatings that could keep ice cooler; and even human-made snow and ice, for heaping onto the places where the old stuff is vanishing.

These ideas are controversial, but they aren’t exactly fringe. They’re often the brainchildren of researchers at major mainstream institutions, published in prominent, peer-reviewed scientific journals. Collectively, they fall under the large umbrella of geoengineering, which uses technology to deliberately manipulate the environment. Carbon geoengineering, for instance, focuses on removing carbon dioxide from the atmosphere, while solar geoengineering, also known as solar radiation management, aims to cool the planet by reflecting more sunlight back into space. (Harvard University has a research program dedicated to the latter.)

Many of the proposals for putting glaciers on life support fall into the solar geoengineering camp, and call for herculean efforts in remote places, where the most ice is. In 2018, John C. Moore, chief scientist at the College of Global Change and Earth System Science at Beijing Normal University, and a professor of Climate Change at the University of Lapland’s Arctic Centre—along with colleagues in Finland and the United States—outlined three ambitious geoengineering ideas in Nature. They fell somewhere between thought experiment and blueprint: The team wrote that it wanted “to stimulate discussion,” and acknowledged that all their ideas would require extensive modeling and feasibility studies.

One idea involved filling in a sill near the base of Jakobshavn glacier in western Greenland, where warmer water is “eating away at the glacier’s base.” Padding that furrow with gravel and sand could create a berm to keep the glacier away from the warm water, the team wrote. Another idea involved removing the layer of water that accumulates below glaciers in Greenland and other lower latitudes, where sub-glacial streams “act as a lubricant, speeding up the flow, which in turn generates more heat, and creates more water and slippage.”

More recently, in July 2019, Postdam Institute for Climate Impact Research scientist Johannes Feldmann, along with two collaborators in the U.S. and Germany, proposed a way of bulking up the West Antarctic ice sheet by manufacturing snow. Writing in Science Advances, the team described computer simulations that suggest the sheet could be bolstered by 8 trillion tons of human-made snow, constructed by siphoning ocean water, moving it several thousand feet, cooling and possibly desalinating it, and blasting it onto the ice sheet with tools that Live Science described as “massive snow cannons.”

Not all solar geoengineering projects are quite so intensive. A team led by Leslie Field, a chemical and electrical engineer and founder and CEO of the nonprofit Ice911, has been testing a more localized approach: a nontoxic, reflective material, made of glass microspheres that they say could increase the reflectivity of Arctic ice. In a 2018 paper in Earth’s Future, Field and 10 collaborators described its albedo-boosting effect as akin to protecting the ice “from the summer sun, much like a white shirt fends off the sun for a person on a hot summer day.”

Broad-scale geoengineering proposals, in particular—and the idea of funneling more money toward hatching and testing more of them—have caused friction in the scientific community. Critics say the scale is too vast, the cost is significant, the feasibility is unclear, and the potential collateral damage is unknown.

“I think if you gathered a whole pile of glaciologists into the same room, they would not agree” about large-scale solar geoengineering, says Twila Moon, a research scientist at the National Snow and Ice Data Center. “[It’s] not spoken about as much as other areas of research,” Moon says, “and I think that connects with personal feelings people have about where effort and money is focused, given that those are limited resources.”

Some environmental stewardship organizations, including the Natural Resources Defense Council, have expressed tentative support for more research into geoengineering efforts, while highlighting that they are no substitute for cutbacks in emissions. But broad implementation seems fairly distant: A 2017 report from the U.S. Global Change Research Program said that large-scale geoengineering projects are “as yet unproven at scale,” and their benefits and risks need to be studied.

Moon sees numerous problems in proposals to save specific glaciers. Infrastructure is a big hurdle—as its advocates freely admit. (Just hauling ocean water to land, in Feldmann’s Antarctica proposal, would require the brawn of 12,000 wind turbines, the authors write.) Then there’s the thorny problem of geopolitics. “Antarctica is essentially a shared continent that is preserved for research, wilderness, things like that,” Moon says.

Meanwhile, solar geoengineering doesn’t trace climate change back to the source. In response to Moore’s proposals in Nature, Moon and six other environmental researchers wrote a letter, contending that (among other concerns) the “limited resources available” would be better used to “address the root causes of accelerating ice loss—namely emissions and human-induced climate change.” The proposals, if they do pass muster in the kinds of feasibly tests that the 2017 national climate report called for, might buoy glaciers temporarily; they wouldn’t stave off climate change wholesale. Moon worries that the public will assume that we can “depend on technology to bail us out.”

A glacier like Rhône is a lot different from an Antarctic ice sheet. It’s not a knotty international issue, dependent on long-shot, high-cost efforts in remote reaches. “If you’re trying to protect a small glacier in the Swiss Alps, you can make a local decision, and a local area can say, ‘This is what we’re going to do, this is how we’re going to allot resources,” Moon says. (Of course, remote ice sheets pose a much greater risk, in terms of global sea level rise, than a single mountain glacier.)

And the blankets over the Rhône glacier may be helping, at least on a small scale. David Volken, a scientist in the hydrological forecast division of Switzerland’s Federal Office for the Environment, told the AFP in 2015 that the blankets reduce summer ice melt by somewhere between 50 and 70 percent. Still, the overall melting continues: according to analysis from the Swiss Glacier Monitoring Network, several glaciers experienced “unusually high melt rates” during this summer’s heat waves, E&E News reported. Tourists don’t seem deterred: A representative says that the number of visitors to the Rhône ice grotto this year is similar to other years.

Strategies to save individual glaciers, Moon says, may be helpful. Though she doesn’t know of data that tracks the effect of wrapping the Rhône, “It makes physical sense that if you are protecting a glacier from additional radiation, you are creating some delay in the disappearance of ice,” she says. But interventions like this are treating symptoms of a much larger problem. “The reason they are losing ice is this long-term change in air temperature and changes in precipitation,” Moon says. “Perhaps there’s some space there for a metaphor about battle versus war.”

Respect the Hammock, One of Humanity’s Greatest Creations

Why Is This Rippling Alaska Glacier a Research Hotbed?

Malaspina Glacier is the world's most accessible of its kind—but that's not the only reason scientists find it so cool.
science

Researchers scramble to find and study everyday items preserved for millennia and now at risk.
glaciers

In the aftermath of an extreme melt event, what do scientists see in the Greenland Ice Sheet’s swirls of white, blue, and ominous gray?
insects