A Stately English Lawn Is Going Wild In the Name of Biodiversity - Atlas Obscura
Want to see fewer ads? Become a Member. 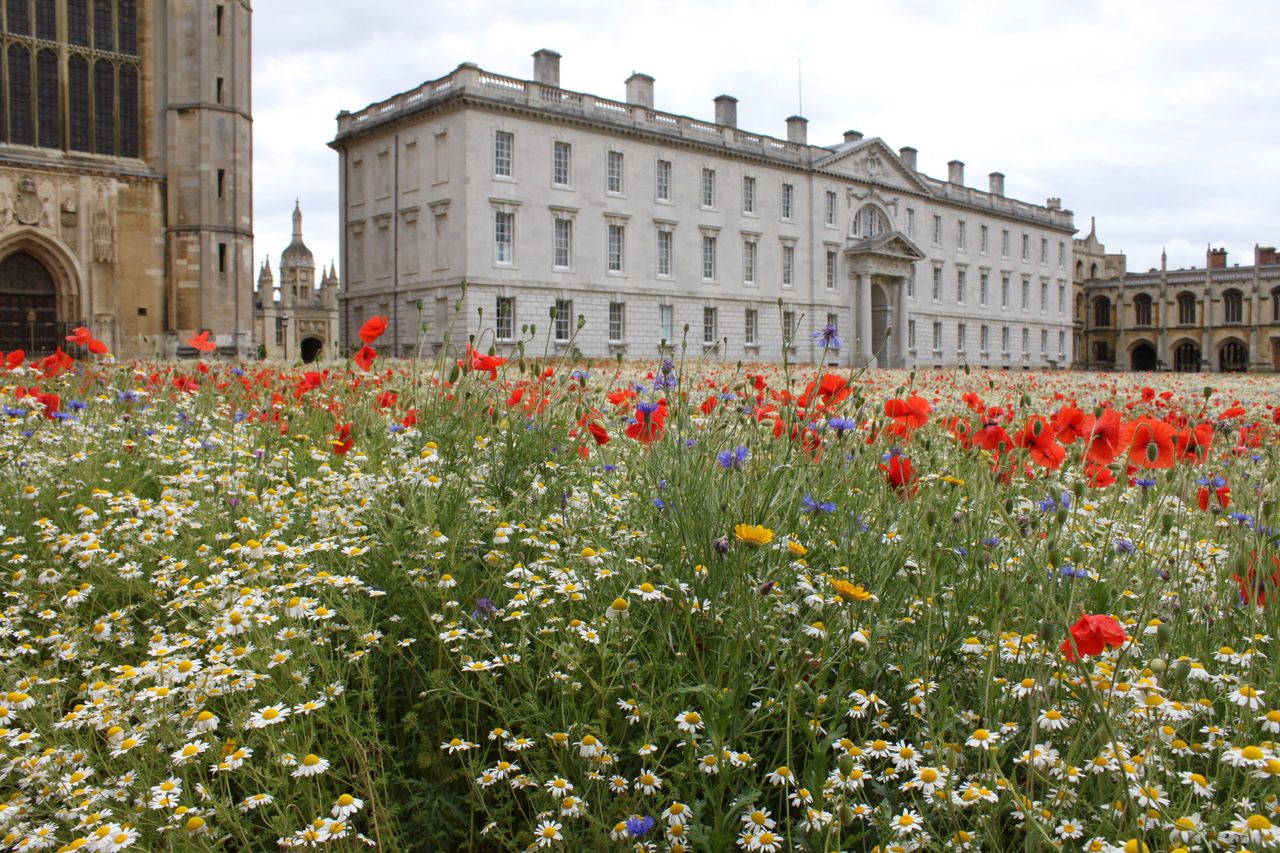 A "glorious, Monet-style chaos" has taken root at the University of Cambridge's King's College Chapel. Geoff Moggridge
In This Story
Destination Guide

In one of England’s most iconic corners of history and intellect, a colorful and very modern transformation is taking place. After some three centuries as a perfectly manicured formal lawn, the grass behind the storied King’s College Chapel, at the University of Cambridge, has burst into the “glorious, Monet-style chaos” of a wildflower meadow—all in the name of biodiversity.

Those are the words that the college’s head gardener, Steve Coghill, uses to describe the view from where he sits on this day in early June. He mentions birds like house martins, swallows, and swifts that are swooping down to feed on insects attracted to the brilliant red poppies, white oxeye daisies, and intensely blue-purple cornflowers that have come up in the past few weeks.

The scene is a striking contrast to the immaculate lawn that has long been part of the famous view of the chapel from its rear (the “Backs,” as it’s locally known). “It’s been a great lawn since the 18th century,” says Coghill. “It was a big thing asking for the changes.”

Indeed, the origins of the grass expanse in 1772 included a particular purpose: to demonstrate wealth. (The land for King’s College was acquired in the 1440s by its founder, King Henry VI.) That wealth came through in displays of land that broadcast how much one could afford not to devote to activities such as growing food and raising cattle—a change in 18th-century fashion for landscapes and gardens that had once dictated exhibitions of affluence through the very opposite.

“All this productive lawn is here as an ornament,” Coghill says. “Then we began moving into the 21st century. Whilst that aesthetic is very important, we really have to think about sustainability. If there are ways to manage our landscapes that can make them more biodiverse and exciting for all the insects and mammals, then why not do it?”

The loss of biodiversity in the U.K.—a region where gardening, nature shows, and walks in the countryside are deeply cherished—has been followed closely by research and conservation groups. According to a 2019 State of Nature report, produced by a coalition of more than 70 such organizations in the United Kingdom, 15 percent of species are threatened with extinction, and 41 percent have shown strong or moderate declines in abundance since 1970. For the past 50 years, the report says, natural habitats have been hard hit by agricultural practices in particular, as well as urbanization, climate change, and pollution, among other factors.

At King’s College, says Coghill, the idea of converting a portion of the stately lawn to wildflower meadow took several years to implement, as approvals were sought and research studies were conducted. It turns out that what made the land difficult to maintain as a formal lawn—dry, sandy topsoil that’s poor in nutrients—made it ideally suited to a wildflower meadow.

(A soil survey also revealed a quirk of the landscape: Bones from a medieval churchyard that once occupied the site made the layer of soil beneath the top one rich in phosphorus, a generally important nutrient for plants, though not for wildflowers. As a result, the college was able to retain the topsoil for its meadow.)

A special selection of seeds for various wildflower and grass species was sown last autumn, and the meadow started flowering in May. Bees and birds soon followed. Coghill calls it “instant habitat creation”; the idea is to then wait and see what flourishes and arrives naturally.

“What we’re doing now is to stop mowing, stop watering, stop fertilizing, stop weed-killing—reintroducing plant species that we would expect to grow naturally on this type of soil, and seeing what establishes,” says Cicely Marshall, a King’s research fellow who plans to survey the meadow annually to see how its biodiversity is changing.

The less intrusive and less expensive management of the meadow is another benefit of the project, which the college has agreed to support through 2024 before re-evaluating. “There’s a huge amount of maintenance to keep the lawn short and green,” says Coghill, including mowing twice a week, fertilizing, and using herbicides and pesticides to keep out weeds and bugs.

The wildflower meadow—which occupies about a third of the hectare-sized (or 2.5-acre) lawn—will be managed like a hay field, he adds, with minimal intervention but more hand work. The grasses will be allowed to grow fully before they’re harvested in late July or early August, dried out, and then baled on site.

A pathway that was supposed to have been mown this year to invite people to walk through the meadow has been postponed due to restrictions from the coronavirus pandemic, says Coghill. When it is put in place, it will be the first time in centuries that the public is allowed to tread on the lawn’s premises.

“For the first time, people can ignore the ‘Keep Off the Grass’ signs,” he says, “and ramble through a beautiful meadow.”

More room to roam for the islands' unique fauna.
objects of intrigue

They’ve just been sitting in the dining room all this time.
science

With a new train line threatening its habitat, the big cat may be the key to protecting this Mexican reserve—and everything else in it.
food

Once used as a survival food during World War II, these flower bulbs are making their way onto restaurant menus.
Video • Wonder From Home