The Stones of Stenness

Possibly the oldest of Britain's ancient henges is also one of its most stark.
Place

One of the most popular megalithic sites in Ireland stands as a humbler version of Stonehenge.

The Blarney Stone, of Blarney Castle (near Cork), in Ireland, is a huge draw for tourists. The stone is built into the walls of the castle, and, according to legend, is capable of granting visitors the gift of the gab, or eloquence, in exchange for a kiss. It’s not so easy to kiss, however. Firstly, you must climb to the top of the castle’s battlements, and then, while being held by an assistant, bend over backwards and kiss the underside of the wall. When I visited the Blarney Castle, locals told stories of their youth, when they would help tourists kiss the stone during the day, and then urinate on it at night.

Kissing the stone in 1897, before the safeguards were installed. (Image from The National Library of Ireland, via Wikipedia.)

On the road from Blarney to Waterford (home of the famous crystal), you can drive passed the town of Dungarven, and from there stop at the Answering Stone, or Cloch Labhrais. The stone is a boulder, split in roughly in half, and, according to legend, can tell whether a speaker is lying. According to the myth, a man once suspected his young wife of an illicit affair, and took her to the stone to find out for certain. Through trickery, however, the wife managed to answer the question, but the stone was so disgusted by the deceit that it split in two.

Still in Ireland, how about the Lia Fáil, the coronation stone for the High Kings of Ireland, until around 500 CE. Just north of Dublin, the Stone of Tara is said to have been the site of the coronations of all the Irish High Kings. According to the Lebor Gabala (a text dating to the 11th century), the stone was brought to Ireland by the Tuatha Dé Danann, a semi-divine race who predate human occupation of the island of Eire. According to the Scots, however, the actual Lia Fáil was taken to Scotland for the coronation of Fergus the Great (who died soon aftwards). The stone is said to cry out or roar with joy when the rightful king set his feet upon it, and is also said to hold to power to both regenerate the king, and to grant him a long reign. Cúchulainn, a mythical Irish king, was said to have split the stone when it refused to acknowledge his heir. The Lia Fáil has been vandalised twice in recent times, once in 2012, and again in 2014. We’re going to cheat slightly, for continuity’s sake, and travel to The Giant’s Causeway before we head across the Irish Sea and into Great Britain proper. Around 40,000 connected basalt columns make up the Giant’s Causeway (or Clochán an Aifir in Irish). According to Irish myth, the coloumns are all that remain of a causeway built by Finn mac Cumhaill (known as Finn MacCool). Finn was challenged to a fight, by a Scottish giant by the name of Benandonner. There are two different versions of the ending of their fight. In the first, Finn defeats his Scottish opponent. In the other, Finn sees that his opponent is much bigger than he is and so begs his wife, Oonagh, to disguise him as a baby. When Benandonner sees the size of Finn’s baby, he believes that Finn must be huge, and flees. Across the Irish Sea, at Fingal’s Cave on the Scottish island of Staffa, there are similar basalt columns (which occurred because of the same volcanic eruption, around 60 million years ago), which is believed to be the origin of the story.

The Giant’s Boot (Image by Sean McClean, via Wikipedia).

Giant’s Causeway at sunset  (Image by Chmee2, via Wikipedia) Basalt columns inside Fingal’s Cave (Image by Stockholm, via Wikipedia)

In Scotland, an unassuming block of red sandstone was used for centuries as the coronation stone for the kings of Scotland: the Stone of Destiny, or the Stone of Scone. Originally kept at the Scone Abbey, in Scone, the stone is also known as the An Lia Fáil, Jacob’s Pillow Stone, and the Tanist Stone. Legends date the stone to Biblical times, as the pillow-stone of Jacob, the Israelite patriarch. The Stone of Scone was taken from Scotland by Edward I (also known as Edward Longshanks, or Edward, the Hammer of the Scots) in 1296, as spoils of war, and was fitted into a wooden chair. This wooden chair is the coronation throne of England, and most English monarchs since 1296 have been crowned upon it. There is a conspiracy that surrounds the Stone of Scone, however, positing that the monks of Scone hid the real stone, and that the English troops took the wrong stone home.

The Stone of Scone in the Coronation Chair at Westminster Abbey, 1855. (Image by an unknown engraver).

Although Edward II agreed, in 1328, to return the Stone, rioting crowds surrounded Westminster Abbey, and the stone remained at the Abbey until 1950. In 1950, four Scottish students removed the Stone, as part of a plan to relocate it to Scotland. The Stone broke in half, and the men enlisted a new conspirator, a Scottish Nationalist, who, by a twist of fate, was a descendant of Edward, the Hammer of Scots. All of Great Britain searched for the Stone, which was eventually repaired, then left on the altar of Arbroath Abbey. Four months later, it was returned to Westminster. It eventually came back to Scotland on St Andrew’s Day (the 30th of November) in 1996. It now sits in Edinburgh Castle. Replica of the Stone of Scone at Scone Palace (Image by sarniebill1, via Wikipedia).

Further south, in Netpool, Wales, sits the Carreg y Fendith, or the Blessing Stone. This stone is traditionally referred to as the stone from which the Abbot of St Dogamaels Abbey blessed the village’s fishing fleet. It is also known locally as the Answering Stone, as, if you stand on the stone and yell, your echo answers you. 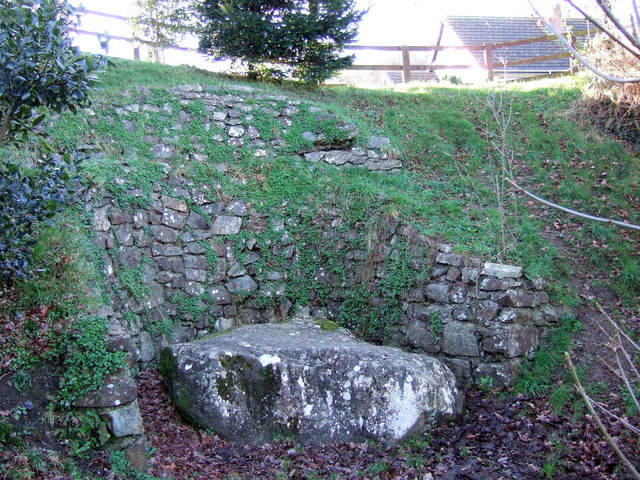 In London there is the mysterious London Stone, which sits behind a stone grill in the City of London. The actual purpose of the Stone is unknown, but its recorded history dates back to 1100 CE. At different times, it has been called a Roman milliarium, or distance marker; a terminus, or stone sacred to Jupiter; or a part of a Roman administrative building. In the 18th Century, the London Stone was considered to be prehistoric, and an object of Druidic worship. This idea doesn’t hold much water with modern archaeologists. More recently the Stone has been proposed as the stone from which Excalibur was drawn.

London Stone, seen through its protective grille (Image by Voyager, via Wikipedia). The Heel Stone is usually considered part of the Stonehenge complex: It stands almost 80 metres from the center of Stonehenge. Legend states that the Devil threw a stone at a friar, and hit him in the heel. Some suggest that the name actually comes from Freyja’s He-ol, or Freyja (the Norse goddess)’s way.

Further south, at Totnes, a town on the River Dart, is a stone that claims to be where Trojans landed and founded Britain. Allegedly, Brutus of Troy, the mythical founder, first came ashore and proclaimed: “Here I stand and here I rest.”

The stone sits high above the tideline, and, although Geoffrey of Monmouth mentions Totnes as the landing site of the Trojans in 1136, the stone was not referred to until 1697. To complicate matters, the stone could have been the stone from which the town crier (or bruiter) called out his news, or it could have been le Brodestone, a boundary stone mentioned several times in the 15th century. Totnes’ other claim to fame is that the town was (again, according to Monmouth) the landing site of Uther Pendragon, when he arrived to reclaim the throne of Britain.

The Brutus Stone in Fore Street (Image by Alex1011, via Wikipedia).

There are many other stones Great Britain that claim an ancient importance. Do you know of any wonderful stones we’ve forgotten? Let us know!

Join us for a daily celebration of the world’s most wondrous, unexpected, even strange places.
geology

We Now Know Where Almost All of Stonehenge's Stones Came From

The main source for its largest megaliths is just a stone’s throw from the iconic site.
megalithic

A giant circle of pits is the largest Neolithic site found in Britain to date.
Video • PinDrop